Do you ever feel like you’re stuck in a fashion rut? *turns around in chair to face camera from the other side* I’ve been there.

Okay, that’s enough of that, but really, do you? And really, I have been there. I’m there constantly. I’ll do this thing where I’ll catch myself wearing the same outfit in the exact same way and it makes me feel dead inside. I couldn’t change, like, one thing about the entire situation? We’re keeping the socks the same, too? Tragic.

When this happens people are quick to suggest looking at fashion blogs or magazines. Honestly? They’re fine. I’ll look at them, sure. But after enough pictures, it all feels too polished and in general they all seem seem to wonder if you’ve just considered looking rich and beautiful? Or they suggest going shopping! Spice up your wardrobe. Get out there and spend some cash, girl, you deserve it. Except, no, I don’t, and do any of us, really?

Of course I want to be a person that’s nonstop crushing it in a rotating lineup of perfectly tailored off-shoulder jumpsuits. Absolutely I do. That’s a fact. I’d love nothing more than to enter a peak Anna Nicole era of my life. But until somebody gives me the zero-questions-asked $10,000 that I’m entertaining as a real possibility in my life, that’s not going to happen.

I need some realistic solutions for something that’s not actually a problem. Which is why I went a little off script to break from routine. Just for fun. Privately. Shhh, it’s just for me. Until now:

1) This is totally legal. Check the books, buddy.

2)  We’re working on solid ground. Decade-hopping to rip styles is straight out of the Professional Fashion Editor handbook. Recycled trends aren’t coincidences! Anna Wintour 100% has a Rolodex filled with the fanciest jean cuts from every decade just in case she’s ever low on content.

3) This is a chance to let your brain reset, like a writing prompt but for clothes. For people coming from a women’s fashion perspective like I am, this is a chance to explore how men’s fashion approaches color combinations, patterns, layering, and textures, warping your brain around them, and then updating them as you see fit. For people not coming from a women’s fashion perspective, these are still good outfits to mimic. The collar placements alone on some of these things are enough to change your whole world around.

4) Dressing as Leonardo DiCaprio is a meta gay experience. Who was many a baby queers crush if not Leo f’in DiCaprio, his assessable, pretty face speaking to hidden sensibilities?

5) This is the best part: you get to have a secret while you walk around in public, and not a bad one, like you got a puppy from an adoption agency but then returned it in the middle of the night so they’d find it in the morning. I didn’t do this! I’m just saying it’s not that kind of secret. Relax! The secret you have is that you essentially get to prank every single person you encounter. The check out lady has no idea you’re dressed as Leonardo DiCaprio from the 90s and yet there you are. If anything this one’s going to get you out of the house.

Enough talking, let’s get to the goods. 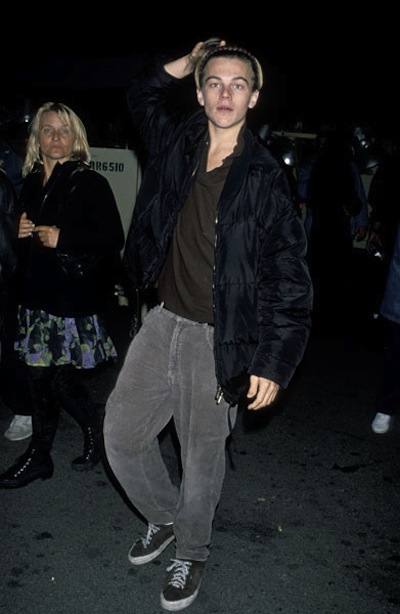 Black bomber jacket, brown polo shirt, gray pants, white soled shoes. Love it, love it all, love the color scheme, love that this headband is making an appearance. Those appear to be corduroy pants and let me just say if I had a pair of high rise corduroy pants in gray I’d probably ascend to a new level of inner peace, wherever Owen Wilson resides. If you don’t have a bomber jacket, improvise with something puffy and/or oversized. Life’s right there for the taking. 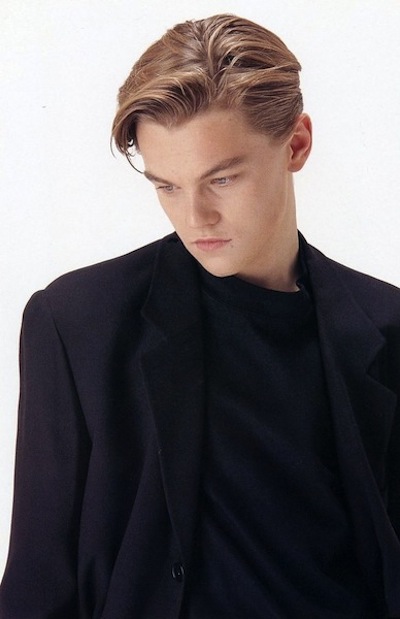 Okay, yes on the monochrome blazer and high cut shirt combination. Make the pant the same color, slick your hair back and slip into the night. Close your bank accounts, take your cash, and get in a car. Drive until you hit a spot that has mountains and water. 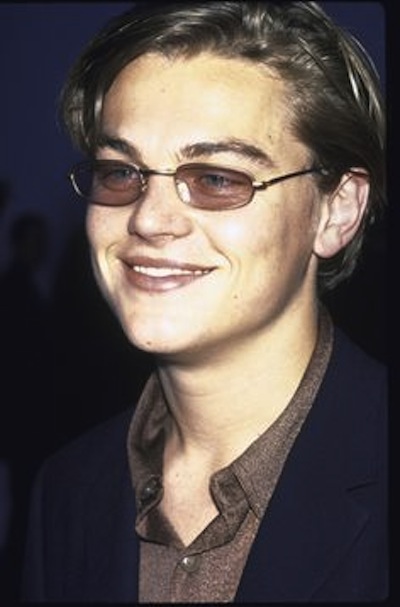 My man Leo looks high as hell here, but that doesn’t mean he doesn’t have a point with matching his lenses to his shirt. The button up shirt appears to have a polyester sheen to it, which under a blazer is a risky gamble to make in the ventilation department, but what is fashion if not taking risks. Bottom line here: mix and match navy and brown like you’ve never mixed and matched navy and brown before. 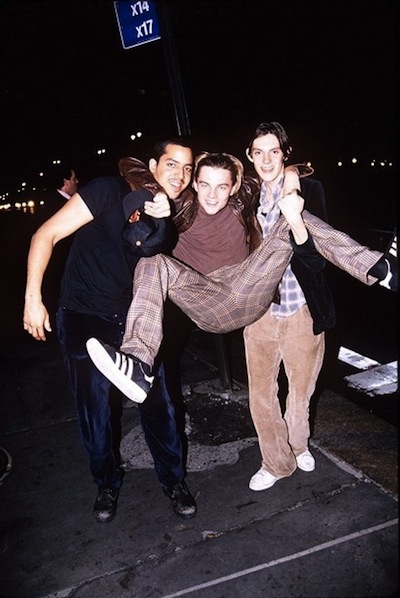 This burgundy leather jacket, brick red shirt, and patterned pant of a similar hue must be recreated en masse. Oh god, and the Sambas. Does anyone have Sambas still?!? If you don’t have access to a burgundy leather jacket, as I believe those were all sucked into some sort of portal during Y2K, what about a rain slicker or an enthusiastic cardigan? 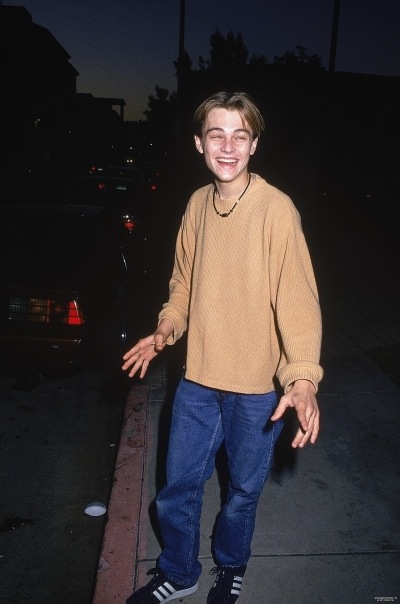 Dark demin, some athleisure shoes, and a whatever shade of tan that shirt is is a cartoon Italian chef kissing his fingers. Mwah. Beautiful. I’d go for a tuck of the shirt but that’s just me. No disrespect, obviously. I’m not the one who’s dated a thousand supermodels, what do I know? 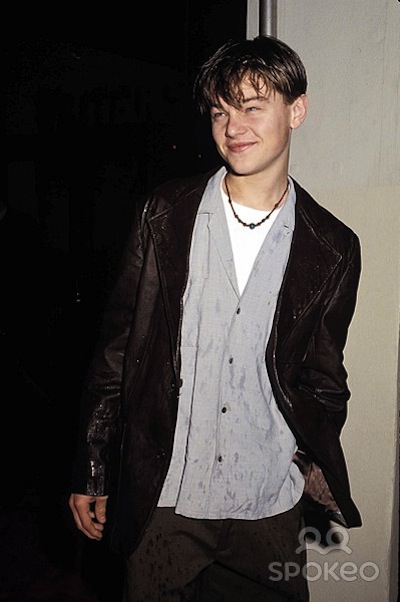 Making a white undershirt the star and not the supporting role of an outfit and then pairing it with grays and browns is powerful and I think you should try it. 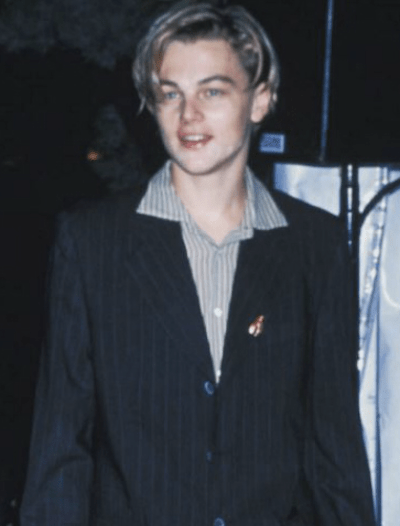 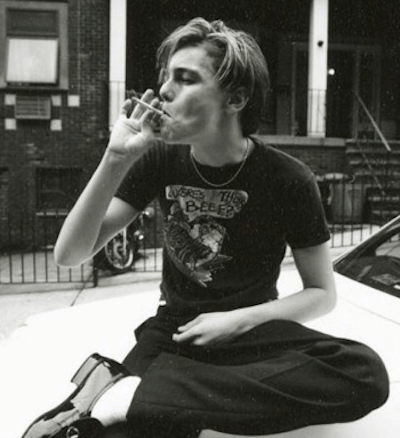 You were made for a fitted tee with the same color wide leg pant and white socks with shiny flats. Make the pants a long wide skirt if you want!!

This is for fun, why not try it? Or if you don’t want to try it why not just enjoy some pictures of Leonardo DiCaprio, but from the 90s. Where’s the harm? The earth is literally melting ;)