The train just keeps on rolling: This morning, a federal judge in Indiana determined that the state’s same-sex marriage ban is unconstitutional, and couples in the state have already begun marrying. 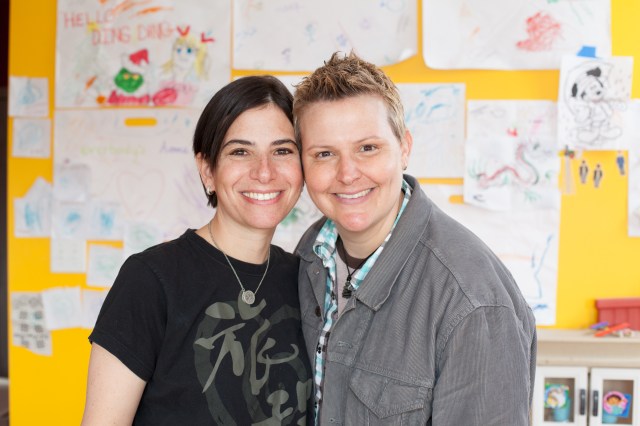 Amy Sandler and Niki Quasney sued Indiana for recognition of their marriage, performed in Massachusetts last year. They were granted immediate relief so Quasney, who is terminally ill, could receive a proper death certificate recognizing her family. The appeal for their case brought about today’s ruling.
via Lambda Legal

The ruling comes after the appeal of an earlier decision to recognize the Massachusetts marriage between Amy Sandler and Niki Quasney, who is terminally ill, after that couple and four others sued the state to challenge its marriage ban. During the appeals process, both the state and Lambda Legal, who represented the couples, asked that U.S. District Judge Richard Young decide not just on Sandler and Quasney’s marriage but on the wider issue of same-sex marriage in Indiana. In his ruling, Young rejected the state’s defense of its ban and acknowledged the harm done to same-sex couples when they are not allowed to marry.

“These couples, when gender and sexual orientation are taken away, are in all respects like the family down the street,” he said. “The Constitution demands that we treat them as such.”

The state is expected to appeal Young’s decision, so we may see a stay on marriages like the one issued in Arkansas last month. Indiana lawmakers have also planned a constitutional amendment banning same-sex marriage as early as 2016. However, as Young noted in his decision, courts across the country have spent the last year recognizing marriage as a fundamental right for same-sex couples, with no real signs of stopping:

The court has never witnessed a phenomenon throughout the federal court system as is presented with this issue. In less than a year, every federal district court to consider the issue has reached the same conclusion in thoughtful and thorough opinions – laws prohibiting the celebration and recognition of same-sex marriages are unconstitutional. It is clear that the fundamental right to marry shall not be deprived to some individuals based solely on the person they choose to love.