This is great news, because the Democrat-led State Congress is expected to pass SB-11, as well, and Governor John Hickenlooper has been a proponet of equality from the start, even tweeting, “Civil unions [are] about justice and economic prosperity. We’ve said before, saying again: Pass this bill!” 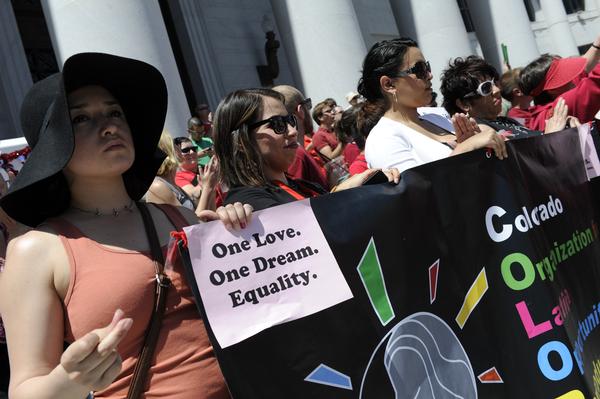 The bill has been sponsored by four of Colorado’s out gay legislators, including Sen. Pat Steadman, Sen. Lucia Guzman, Rep. Sue Schafer and Speaker of the House Rep. Mark Ferrandino. It’s expected to be on Governor Hickenlooper’s desk by early spring and become law on May 1st.

If passed, SB-11 provides committed gay and lesbian couples with crucial legal protections, a selection of which includes the ability to take family leave to care for a partner, make medical decisions for a partner, to live together in a nursing home and to adopt children together.

This is nice change from what happened last May, when the State Congress tried to pass a civil unions bill with a Republican majority in the house. The bill passed the Democrat-led Senate without a hitch and Governor Hickenlooper even called a special session in order to get it passed through the House. Republican Speaker Frank McNulty tried everything he could do to defeat the bill, including sending the bill to the Republican-controlled Colorado House of Representatives State, Veterans, and Military Affairs Committee, where it was defeated on a 5 to 4 party-line vote. Republican Speaker Frank McNulty sent the bill to this — the fourth committee to consider the bill — so it could be killed. Rep. Don Coram (R), who cast a deciding vote to kill the bill, acknowledged doing so despite having a gay son.

The Executive Director of One Colorado, Brad Clark released a statement after SB-11 passed the Senate Appropriations Committee saying,

Our community isn’t advocating for civil unions in order to achieve some historic victory for Colorado. We’re advocating for our families — for the couples that have been together 40 years, for the kids whose parents aren’t treated equally in the eyes of the law, for the gay student who finally sees his government recognizing who he is. That’s what we’re fighting for.

Colorado voters overwhelmingly support civil union legislation, with 57% of polled Coloradoans in favor of the civil unions bill that was killed in the last session. With conscious voting efforts, Colorado now has a Democrat-led Senate and House, as well as a Democratic Governor. I don’t want to jinx anything, but I think we can start to get our hopes up for this giant stepping stone on the path to full equality for the LGBTQ community.