Over the last few years, sex toy companies have asked us to review their toys in exchange for, you know, their toys. Today we’re reviewing the WaterSlyde Aquatic Stimulator by Lovability.

Okay, here’s the deal. This toy — the WaterSlyde Aquatic Stimulator — is Not Good. Unfortunately, I would go so far as to say it’s…Bad.

The WaterSlyde is supposed to attach to your bathroom tub faucet and make it easier to masturbate using the stream of water that you generally use to fill up the tub. The toy boasts “water delivered right to your vulva — no more scooching or bathtub yoga” and “hands-free” — lay back, let the water to the rest (disability friendly).” If those claims were accurate, I’d say this toy, which doesn’t require batteries and relies on plain ol’ H2O and gravity to function, would be a winner. But I cannot emphasize enough how the water was not delivered right to my vulva and how I could not simply lie back and enjoy this toy.

The WaterSlyde is a simple piece of plastic (mine was pink — ideal) with a ribbon on one end. I didn’t even glance at any instructions, because setting up the toy is extremely intuitive — you take the toy, position it around your faucet, and tie the ribbon in a bow to hold it in place. I hopped in the empty tub right away to enjoy the water cascading down the toy (I still had high hopes at that point, you see) even though I usually wait for the tub to fill up before stepping in. I was a little chilly, but that was okay — I was about to masturbate! I can give up some comfortable body temp if it means welcoming another orgasm-by-water into my life. I got on my back, positioned myself with my knees up, and leaned my head back against my bath pillow.

But as soon as I positioned myself I saw the major flaw in design. The water was carried a distance away from the faucet, yes, but that distance was…absolutely nowhere near my pussy. I’m pretty short and fat, so I immediately wondered if I was the problem. If I had a longer torso, would the water reach me? If I had less fat around my thighs, would my vulva be more accessible to the water stream? Then I got annoyed at myself for assuming I was the problem, rather than the product, and then I got annoyed at the manufacturer for creating something essentially useless. 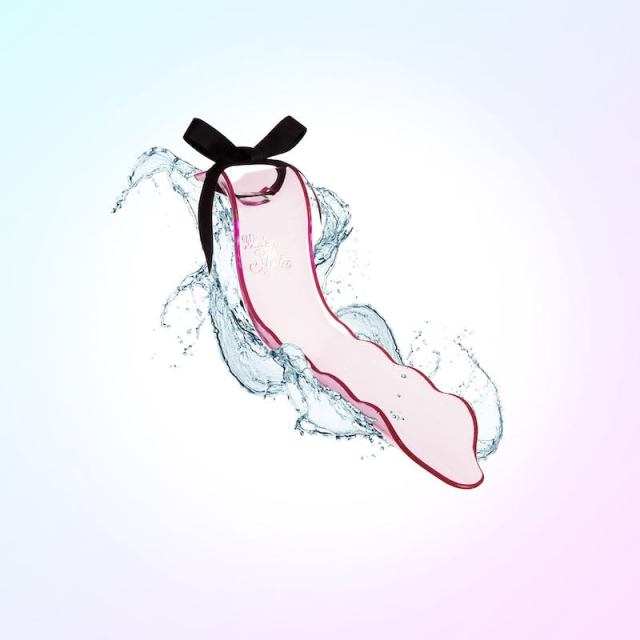 I’m nothing if not determined though, and I was really looking forward to my bathtime masturbation session (my girlfriend had taken to saying I was going to go “masturbath”), so I kept trying. First, I shimmied my body down closer to the faucet, rolling my eyes at the instructions that promised I would never have to do this again. Then the water reached my vulva, but I wouldn’t really call the sensation “stimulating.” I adjusted the faucet so the flow of water was less powerful — nothing. I adjusted my labia with one hand while leaning on the other elbow to try to allow the water more access to my clit — nothing. I adjusted the faucet back to a heavier stream and then held my labia lips open again — nothing. I put my left leg up on the edge of the bathtub, held my labia open, and kind of bucked my hips up a bit, almost causing myself to slip and slide underwater — no…okay, okay, that felt pretty good. That hit the spot. But honestly, after all that trouble, why not just skip the WaterSlyde and put my whole ass against the side of the tub, propping myself up with my elbows — legs in the air, pussy close to the faucet — and orgasm as I’ve done for years and years and years over the course of my one wild and precious life? It genuinely would’ve been easier to do that than it would’ve been to try to get the WaterSlyde to do anything positive to my body.

(I want to note that I did also get on all fours, doggy style, because I am A Serious Journalist when it comes to reviewing sex toys, and that felt fine, but it was more like I was cleaning my asshole than anything else, and if that’s your goal, I’d really just invest in a bidet. Anyway.)

When my girlfriend came upstairs to ask about my masturbath experience, I had to tell her dejectedly that it didn’t work out. “I would call what I just did masturbating as much as I’d call it light bathtub aerobics,” I said. She laughed and told me to write that sentence down for the review, so I did. Then I insisted she try out the WaterSlyde because she’s taller than me and thinner than me, and I thought maybe she’d report back that with a different body shape, the toy worked after all. But nope! She got done with her bath and said she’d also had to scooch down to get the water to even touch her, though she did confirm my suspicion that it was easier for the water to get in contact with her vulva in a hands-free way because she has less fat in that area. She said that even once the water was hitting her pussy, she didn’t experience much pleasure from it, though for the sake of Honesty and Journalism, I pressed her and discovered that she’s never been someone who particularly enjoys getting off in the bathtub and was not one of those girls who had her first orgasm gyrating up against a stream of running water, so I do encourage you to take her perspective with a grain of salt.

Anyway, after all that, we untied the toy from our faucet, and I do not see a world where we ever use it again. We went to the bedroom and fucked each other for a while without any WaterSlyde assists and then we went to sleep. The end.