The rumors are true! The Morning Show got gay! The AppleTV+ flagship soap opera that swears it is a Serious Program About Making The News, has gifted us with not only a lesbian character, but perhaps, a romance?

Okay The Morning Show Got Gay, How Did We Get Here?

Okay, let’s run through the pertinent events of season one so we’re all on the same page. Morning Show anchor Mitch Kessler (Steve Carell) was fired for sexual harassment. His co-anchor of fifteen years, Alex Levy (Jennifer Aniston), was left to pick up the pieces, much to the chagrin of network executive Fred Micklen (Tom Irwin) who was about to fire her. Meanwhile, Bradley Jackson, a local reporter in West Virginia (Reese Witherspoon) goes viral for yelling at a protester at a coal mine (you gotta just go with it) and the clip gets noticed by the show’s talent booker Hannah Shoenfeld (Gugu Mbatha-Raw), who gets her on TMS to be interviewed by Alex. It doesn’t go super well, but the new head of the news division, Cory Ellison (Billy Crudup) takes a liking to her.

A convoluted series of events ends with Alex announcing that Bradley is her new co-host at an event filled with members of the press, effectively forcing the network to let it happen. There a billion side plots, Alex has seven breakdowns (which I have ranked) and at the end of the season, Bradley discovers the network knew about the accusations against Mitch, specifically that he raped Hannah on a work trip to Las Vegas. Bradley wants to expose this, and Hannah reluctantly agrees to be interviewed, but revisiting this trauma leads to her overdosing. In the shadow of her death, Bradley and Alex decide to team up and expose Fred and the network live on air. The feed is cut halfway through! End of Season!

We’re only on the third episode of Season Two, but here’s what we’ve got so far Alex left the show and went to Maine where she has been writing a manuscript and chopping wood. Bradley has a new co-host, Eric (Hasan Minhaj) who we learn in the first episode is leaving for the recently vacated evening news spot. Bradley needs a new co-host, and of course the only person they can think of to bring back is Alex! Never mind the fact that they have not spoken in eight months! The network isn’t doing hot, money wise so Cory decides to use Alex’s return to generate some buzz. Enter, Laura Peterson (Julianna Margulies.) Laura is a veteran anchor at the network (who we have never heard of until now, you really just gotta go with it), and she will be conducting one on one interviews with Alex and Bradley that will air in the weeks before Alex’s big return to TMS. Also? Holland Taylor is here, and all she does is piss.

Alright, I’m Going With It, Now Give Me The Morning Show’s Gay Shit.

In last week’s episode, we meet Laura when she comes to Alex’s penthouse for the interview. This gorgeous piece of exposition takes place:

Laura is wearing a black turtleneck underneath a white dress shirt with a popped collar under a pinstriped blaze. Her ponytail is high, she has a slight bouffant going on, and there is an earring situation, all of it is simply very, very gay. 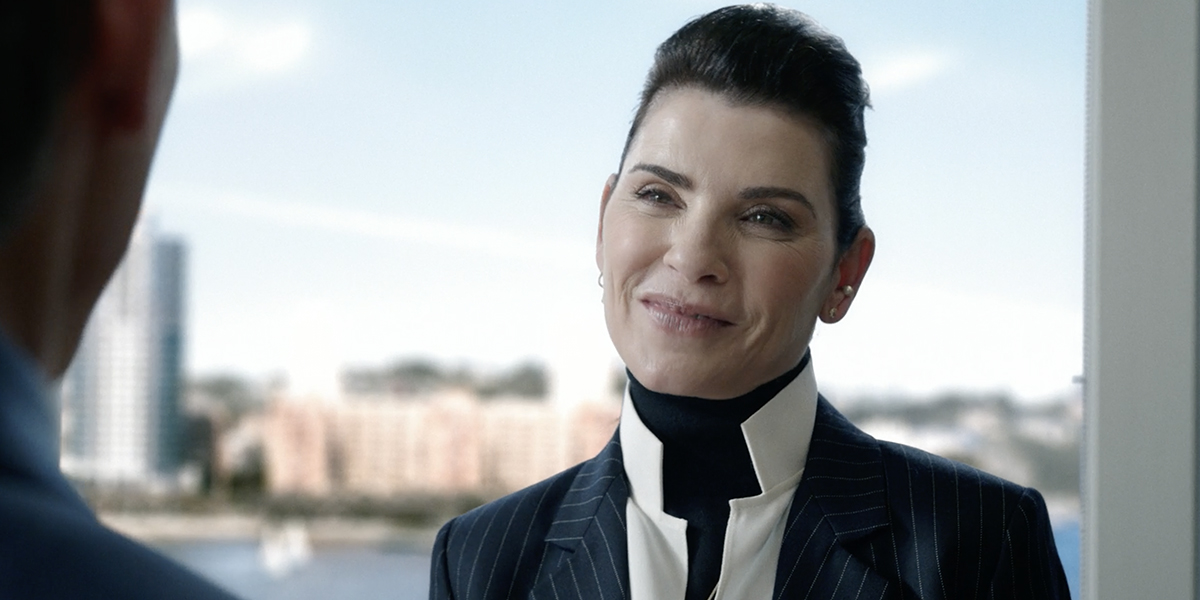 Your Honor, this woman is gay.

This was enough of a gift! Juliana Margulies, a canon lesbian! But did The Morning Show stop there? I am delighted to report it did not. Bradley’s interview takes place at the Iowa Caucuses, because what we really wanted to do was relive the 2020 presidential election AND the run up to the pandemic simultaneously. They get along well, laughing and talking about work and generally vibing. 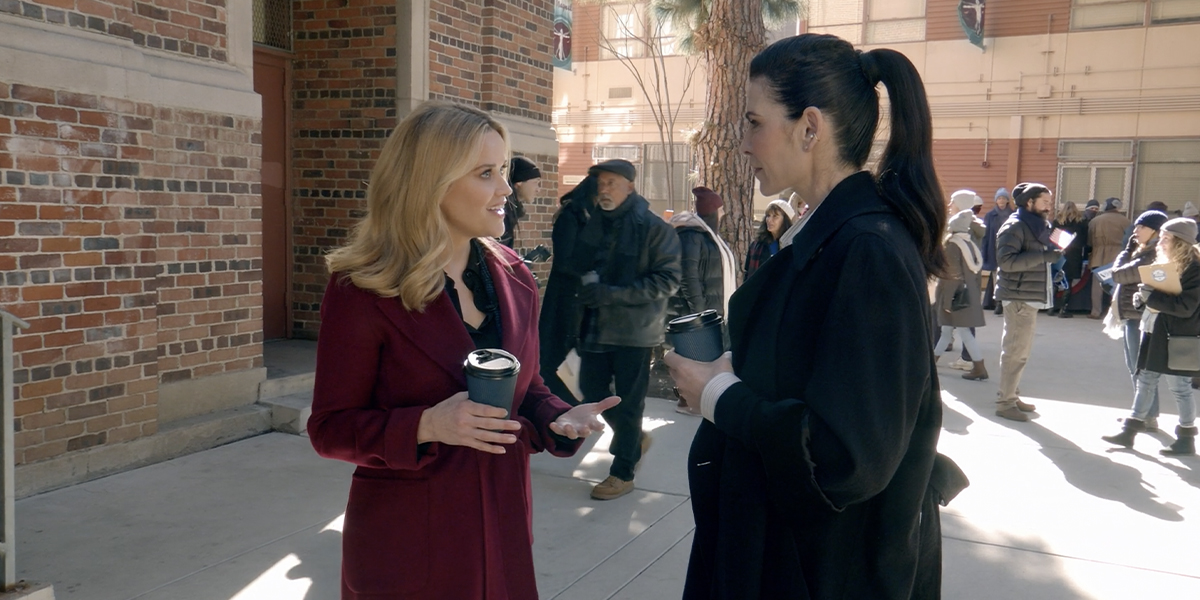 Your Honor, the girls are simply vibing!

After their long day of chatting and vibing, Laura and Bradley head back to their hotel, and whew Laura is laying the praise on thick! Bradley is eating it up, and frankly, flirting her tiny blonde head off! The next time we see the twosome, they are in a car on their way home and then they…make out??? If it sounds like it came out of nowhere, well, it did! I will transcribe the scene for you now.

Bradley: Do you think you got everything you needed for the interview?
Laura: Oh yeah, I got plenty. I could have left before we went inside yesterday, but I was having too much fun.
[A companionable silence falls, they smile at one another]
Laura: Hey. Now that the cameras are off and now that I see how truly awesome you really are, do you mind if I ask you a personal follow up question, just between us?
Bradley: Sure, you can ask me anything.
Laura: Did you actually get vetted for this job?
[Bradley looks at her in stunned silence, then kisses her.]
Bradley: I’m sorry, I just—I—
[Laura blinks, then leans forward. They kiss again.] 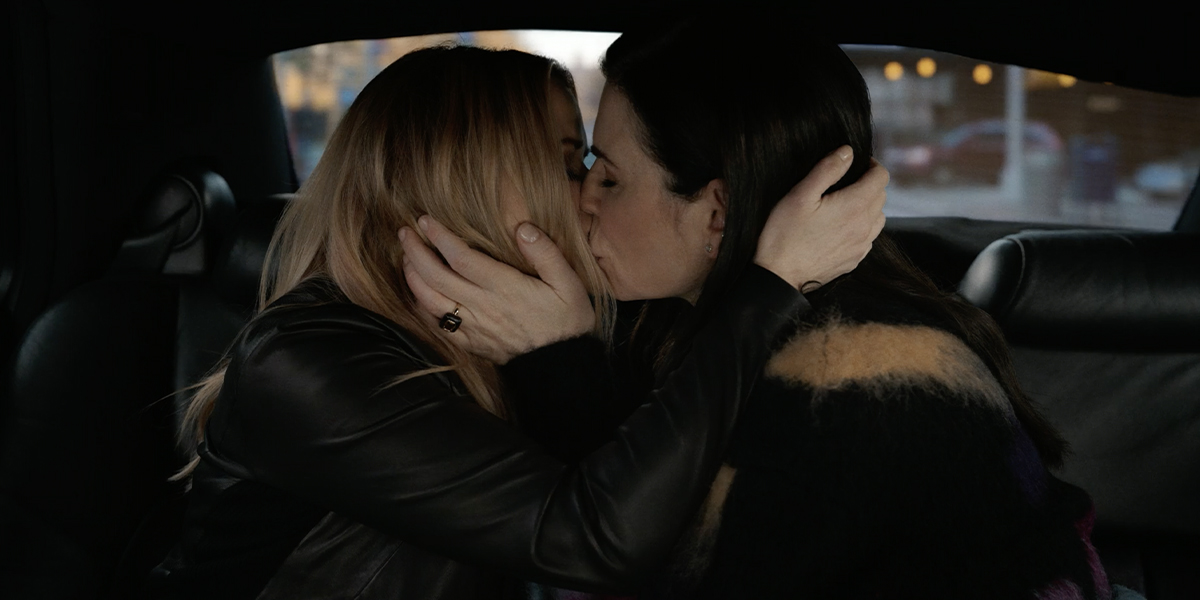 Your Honor, the girls are kissing!!!

What Does This Mean??

Well, considering that Bradley was absolutely not vetted for this job, it was definitely an attempt to sidestep the question. Maybe she’s just a panic kisser?? Though, if that is true, then there are at least fifteen times throughout last season that she should have kissed Alex. Are we going to get a grand queer romance on The Morning Show? Will it matter that they don’t really have a ton of chemistry? We’ll just have to check back next week!

Until we get to the bottom (Bradley) of this, rest assured that I will be here to update you and guide you through any and all gay moments that happen this season! And if you like, you can read my old school, Television Without Pity style recaps via my (free) newsletter “Chaos, It’s The New Cocaine!” where I am bravely recaping every episode in painstaking detail, yes, even the straight stuff.

Christina has written 170 articles for us.