Ah, Dinah Shore. Laughing ladies in the surf, women splashing playfully at poolside, greasy lesbians in bikinis clawing at each others limbs in kiddie pools slathered in olive oil, go-go-dancers shaking their tiny butts to the thumping sounds of Top 40 pop, reality television stars dodging booms while pursuing drama… and Brandy Howard yelling at strangers about their boobs! 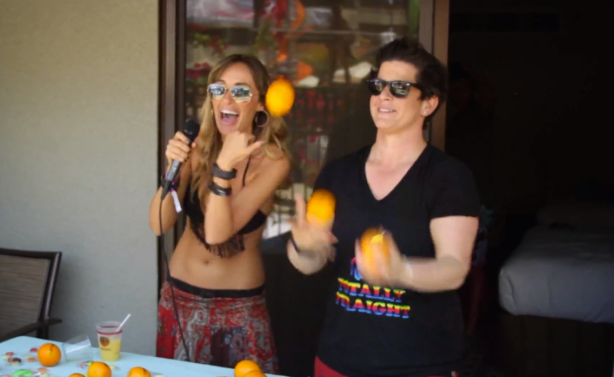 i had two of these oranges up her butthole last night!

Yup, this year Brandy Howard and Julie Goldman endured the pain and the pleasure of Dinah Shore in order to film the second season of the groundbreaking online television program Gay Street Therapy, which has yet to take place on an actual street. Just like their other new show, Roomies, you can catch Season 2 of GST on Tello/OneMoreLesbian. Here’s the description:

You (we) have problems. They (Julie Goldman & Brandy Howard) want to help you. Sort of. In this series, they tackle the toughest (and sexiest) lady lesbian problems with tact and finesse. Or something like that. The results are hilarious and highly inappropriate.

But what’s extra-exciting for everybody about Season Two of Gay Street Therapy is that unlike Season One, Season Two was edited by yours truly. (Me. I’m talking about myself. I edited it. I am the editor for Season Two.) (I didn’t film it or direct it or create it or anything, I just edited it. I’m just an editor. Like how bears are just bears.) So, while we all collectively wait for Julie and Brandy to return to the Box Office, you can chomp into this show!

Here’s a tiny trailer to tease your tits off about this therapeutic program:

New episodes will appear every Thursday on Tello, starting next week! I know Thursday’s already a big day for you because of Glee, and Agents of S.H.I.E.L.D and Scandal and everything, but I think you can squeeze this in. Just like how you can squeeze a fist into a human being. It happens and it’s fun and everybody feels really good about it afterwards.