You know that feeling when a customs officer or sniffer dog is headed your way and suddenly you’re second-guessing whether there’s drugs or guns or knuckle dusters (does anyone use these anymore? Idk airport warning signs always have knuckle dusters) in your bag, even if you’ve only ever seen drugs or guns or knuckle dusters on TV shows about terrorists? Yeah? Now imagine feeling like that every time a police officer walks past you, or the NSA is on the news (or worse, isn’t), or if you even think about the Israel-Palestine conflict.

Welcome to the world of brown people.

Tired of racist typecasting in Hollywood, Iranian-American actress Kathreen Khavari wrote, produced and played 11 characters in short film “Brain of Terror.” After watching too much Homeland, a young woman struggles with whether she’s a terrorist.

“You can’t trust nobody no more. Not even the habibis on the corner store. Everybody’s tryna become a terrorist these days. I was watching the news the other day, there was this lady – white as paper – and she was a terrorist.”

“Everything you just said was very racist.” 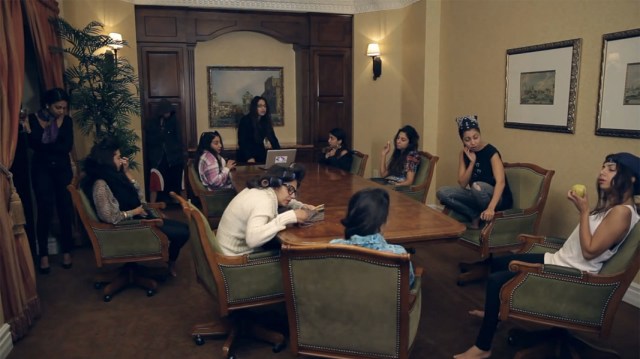 If you enjoyed this and are looking for more ways to escape mainstream media narratives about Muslims, check out Taz Ahmed‘s Muslim VDay cards too.