A genuine highlight of Season Six of Orange is the New Black is the introduction of Daddy, a smokin’ hot butch / former high-end “pimp” played by bona-fide lesbian Vicci Martinez, a singer-songwriter you may remember from her exceptional turn on The Voice in 2011. (We also interviewed her for Autostraddle in 2012, and she appeared in an Autio/Video promo video I edited in 2010.) 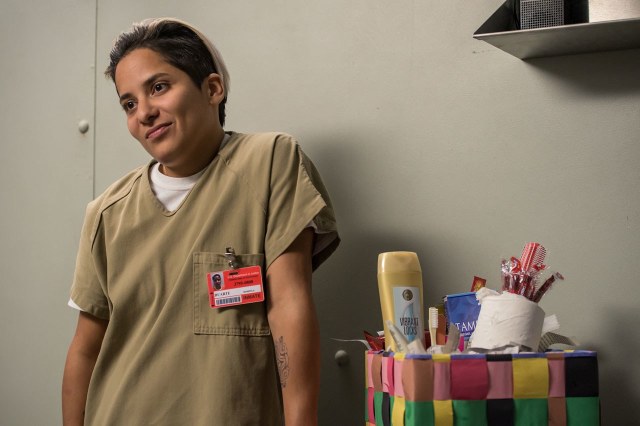 Yes Daddy I do

But here’s something even cuter than she already is: as reported by Crazzy Jazzy / oitnb spoilers account @ducky7goofy on twitter, Vicci Martinez is in an adorable girlfriend situation with actress/musician Emily Tarver. Tarver may not have been on The Voice, but I think we can all agree that she definitely has Gay Voice™

Y'all Daddy and McCullough are dating in real life! The guard/inmate ship of dreams #OITNB pic.twitter.com/fRDRlknwy6

Emily Tarver and Vicci Martinez have also been writing music and performing together since early 2018. That’s right: in addition to being girlfriends and having the same acting gig, they also create art together! They must really enjoy each other’s company and WE ARE HERE FOR IT.

33-year-old Vicci Martinez has been performing since the age of 16 and has around a dozen albums under her belt, some label-released and some self-released. She recently told The Tacoma News-Tribune that after a bad experience launching her own record label with two friends in 2014-2015, she hit rock bottom and ended up in rehab in 2016. By the time Orange is the New Black — a show she’d been a longtime fan of — called her in to audition for Daddy, she’d successfully turned her life around and was ready for her first-ever acting gig.

“We are super in love,” Martinez told The News-Tribune about Emily Tarver. “And we have a music group together. I’ve started to do music again. She’s fulfilling my fantasy of doing duets together.”

Tarver, who appears to also be very good friends with Beth Dover, aka Linda from Purchasing, has played CO Artesian McCullough since Season Four. She’s also a comic who performs with Upright Citizens Brigade in New York, and has appeared as the lead in the USA series DONNY! as well as having parts in Black-ish, The Big C, The Residuals and Best Week Ever.

Vicci Martinez recently told them.us that when she was cast as Daddy in Season Six, she was told her character would be embodying the ancient lesbian art of “getting straight girls to like you”:

When they gave me the part, they were like, ‘You gotta be able to convince straight girls to like you.’ One of the things I’ve done my whole life is getting straight girls to like me, and to end up going to the other side with me. That felt really familiar to me. I was born gay. It was something I just wanted to be accepted for, loving who I love. I am a girl who likes girls.

But she did them one better:

So I hear you met a special someone on set. Is that true?

Yeah. I made a straight girl go gay. [Laughs] Emily Tarver. It’s funny, because last night when we were watching the premiere, I wanted to fast forward to my backstory, and she was like, ‘No, you gotta watch me too.’ It’s fun, and being with somebody who gets this whole show was great. We’re making music together. Tonight, we’re going to do a show for a friend of mine to celebrate the premiere.

We look forward to every single future development of this Orange is the New Black power couple and also will be talking to you about our feelings on Season Six this week! Also; cheers to OITNB for introducing so many cast and crew members to the radical possibilities of a queer lifestyle!!!

Join A+!
Related:Orange is the New Black - Lesbian & Queer Storylines