In this month’s Ask Your Friendly Neighborhood Lesbrarian, I’m excited to return to fantasy!

A little while ago I answered a request for epic/high fantasy with queer women characters and commenter Ashleah asked for recommendations for urban fantasy with queer ladies. She and her wife — who listen to audiobooks together — had listened to the four-book Ayala Storme series by Emmie Mears, which has a bisexual protagonist and a prominent lesbian character, and were looking for similar books. A few other commenters seconded Ashleah’s request, and A. recommended as a starting point the Sarah Beauhall books by J.A. Pitts starring a lesbian blacksmith slash low-budget movie props maker (start with Black Blade Blues). I’ve tracked down eight more queer urban fantasy novels below!

While high fantasy, like Lord of the Rings, is usually set in fictitious worlds that often feel like pseudo-medieval Europe, urban fantasy is usually set in real contemporary urban centers, whether in the past, future, or alt-present, with varying fantastical elements, typically paranormal or mythological creatures, magic, and supernatural conflicts or foes. The setting lends itself to mystery/detective/police stories, and some urban fantasy is a really great marriage between genres. Urban fantasy also has a reputation for being romance heavy; for this list I’ve chosen some books with prominent romance plots and others with none at all. If you’ve never read fantasy before, urban fantasy can be a gentle introduction, especially where it overlaps with genres you already like, like contemporary, romance or mystery.

Sister Mine by Nalo Hopkinson 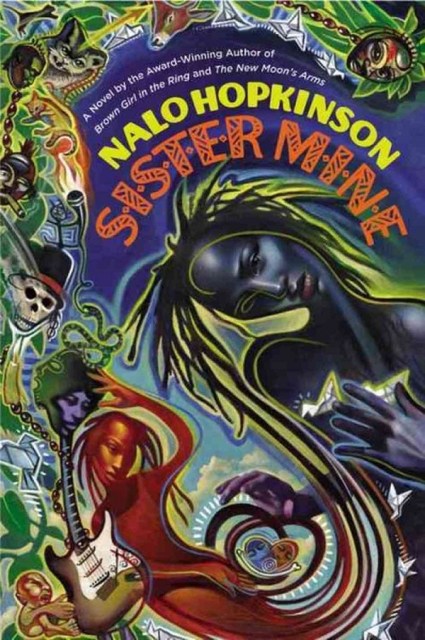 Like everything Nalo Hopkinson writes, Sister Mine is a surreal and richly imagined story with an effortlessly diverse cast. Set in Toronto with fantasy elements informed by Afro-Caribbean mythology, the story feels intimately like “real” Toronto while also imagining a city where demi-gods roam the streets and one person is an enspirited object who used to be Jimi Hendrix’s guitar.

Makeda has a human mom and demi-god dad. She was born conjoined with her twin Abby; their separation has left Abby disabled (she uses crutches) while Makeda hasn’t a drop of celestial mojo (magic). When her father goes missing Makeda is forced to reconcile with her sister and jump back into the magical world she tried to leave. Tackling themes of sibling rivalry as well as reimagining sexuality that lacks the taboos of queerness, polyamory and incest, Sister Mine is one hell of a wild ride.

Iron and Velvet by Alexis Hall 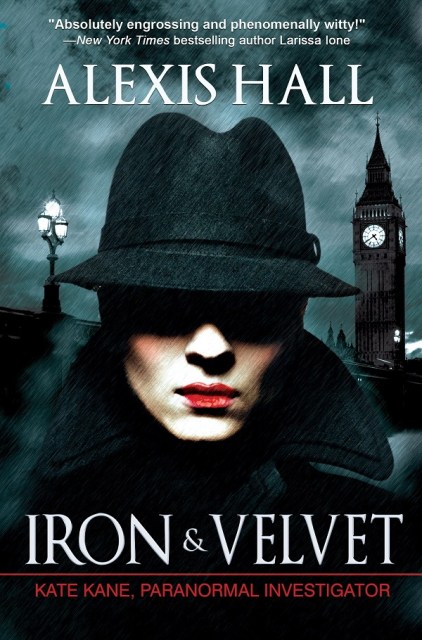 Book one in the Kate Kane paranormal private investigator series, Iron and Velvet is an urban fantasy that picks up all of the genre’s tropes and plays with them. It’s set in London and features Kate, a hard-nosed bisexual P.I. who drinks too much, gets into fights too easily and overuses sarcasm. When an 800-year-old femme fatale vampire asks her to investigate the murder of a werewolf at her club Velvet, Kate knows she’s got to find the killer before an all-out vampire-werewolf war breaks out. She also knows that sleeping with a client would be breaking one of the first rules in P.I. work, but she’s always had a weakness for femme fatales… Iron and Velvet has a fun tongue-in-cheek tone and is a delightful novel that doesn’t take itself too seriously. Don’t miss the sequel Shadows and Dreams! 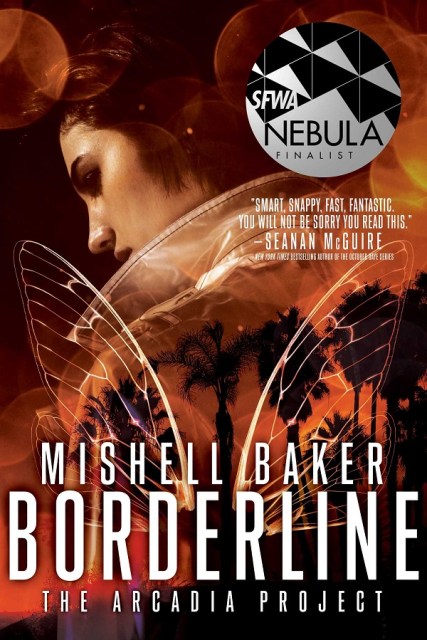 A wonderful mix of fantasy, mystery and Hollywood drama, Borderline is also an unflinching look at mental illness. The bisexual main character Millie was a promising young director and film student before her life fell apart. Now she’s struggling to cope with her borderline personality disorder, and the after-effects of a failed suicide attempt that has left her disabled and getting used to using prosthetic legs. She isn’t expecting the second chance that falls into her lap when someone from the mysterious Arcadia Project recruits her to be a liaison between the “real world” of humans and a parallel one full of creatures straight out of fairy tales. Her first assignment is to track down a missing movie star who also happens to be a nobleman in a fey court. But it’s not just her new life and job that depend on her success: a centuries-long peace between worlds is also in the balance. 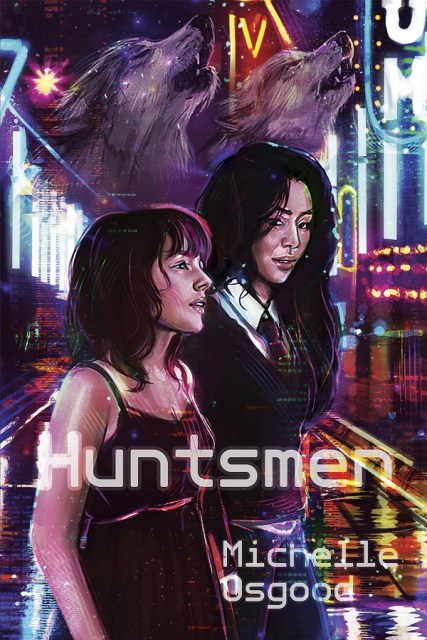 Huntsmen is a delicious mix of urban fantasy and queer feminist romance. One night while out at a club on drag king night, Kiara is stunned to see her genderqueer ex Taryn (Ryn) on stage. Before Kiara has time to grumble about how small Vancouver’s queer community is, her friend spots someone in the crowd with a tattoo of the huntsmen: humans who track werewolves. Since Kiara, her friends, and Ryn are all werewolves — Kiara is the alpha-designate in her pack — they need to get out of there, fast. On lockdown and stuck in close quarters as they figure out what to do, Kiara and Ryn are thrust back together and forced to confront what drove them apart. You can look forward to sexy lesbian werewolf times. Huntsmen is technically the sequel to 2016’s The Better to Kiss You With, but it focuses on different characters, so it can be enjoyed it as a standalone. 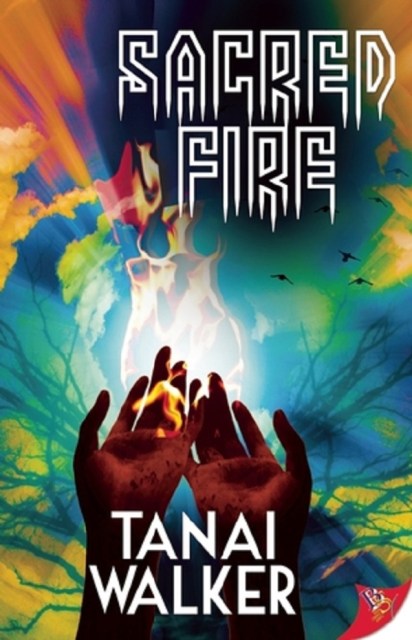 In the special ritual that gives Sacred Fire its name, Tinsley Swann is cursed to change into a beast for seven days every seventh year on the seventh day of the seventh month. It’s the result of having been inducted into the Sisterhood cult at 14. She lives a quiet, isolated life but keeps busy with her erotic antique postcard collection. Leading up to her upcoming transformation, however, Tinsley is in a place she’s never been before: in a relationship, but torn between two women. One is Sandra Ortega, Tinsley’s boss at the medical illustration studio where she works. The other is Leda, a striking woman with an uncanny resemblance to someone in one of Tinsley’s turn-of-the-century postcards. Sacred Fire is almost a lesbian romance — with an all-women-of-color cast and a HEA! — except romance takes a bit of a backseat. Equally important is Tinsley’s eventual battle for the world, the safety of the goddess and the Sisterhood.

The Enchantment Emporium by Tanya Huff 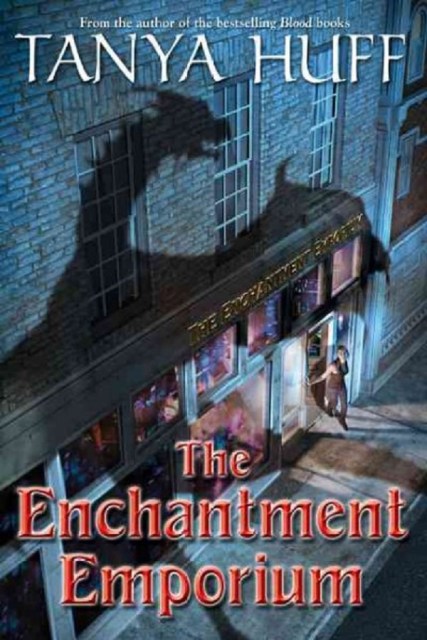 No list of urban fantasy, especially of the queer variety, is complete without queer author Tanya Huff, who was one of the first writers in the genre. The Enchantment Emporium is the first in Huff’s Gale Women series. Magic runs in the Gale family, so when Alysha Gale gets a letter in the mail from her grandmother informing her of her own death, no one really believes it. But Alysha’s eager to escape her meddling aunties, so she heads to Calgary to take over gran’s junk shop and discover exactly what her gran meant when she said the shop was crucial to the “local community.” Huff manages to immerse you in her magical world without much exposition, knowing her readers are smart enough to infer from the characters, who are acting as if everything is normal, because, after all, it is their normal. For more fey, leprechauns, dragons, and queer poly (consensual) incestuous sex, check out the next two books in the series. 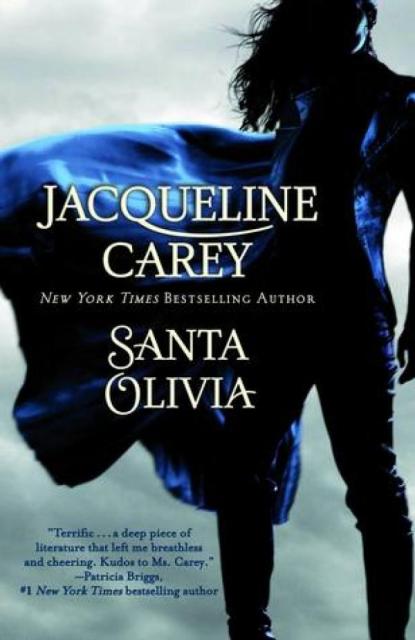 Santa Olivia is Jacqueline Carey’s — of Kushiel’s Dart — foray into urban fantasy, with a dystopian twist. In the near future, Loup Garron lives in Santa Olivia, a disenfranchised, militarized city in a buffer zone between Mexico and the US. Loup has inherited the qualities of speed, super strength, and total lack of fear from her “wolf-man” father, an American military genetic experiment. As she gets older, she decides to put her gifts to good use, becoming a boxer and a kind of vigilante superhero — masquerading at Saint Olivia herself — who avenges the wrongs done on her city by the army. Loup is a fascinating lesbian Latina character trying to save her city under the bleakest of circumstances. Also look for the sequel, Saints Astray. 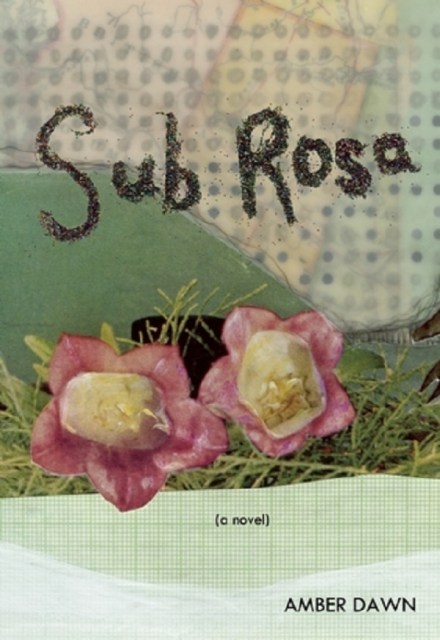 In her Lambda-award winning novel, Amber Dawn creates a dark fantastical vision of an urban center. Set in Vancouver’s downtown eastside, Sub Rosa follows Little, an ironically named protagonist who might have been one of those nameless girls in the newspaper whose stories are told after it’s too late to save them. Little, however, is decidedly capable of saving herself. She is soon initiated into the magical street Sub Rosa, home to an eclectic group of magical sex workers called Glories. Working towards becoming a full-fledged Glory, Little battles the literally and figuratively shady area known as the Dark, where she confronts zombie men as well as her own memories. She also bonds with First, her maternal/mentor figure, and makes out with fellow Glory Isabella. Like the world she’s created, Dawn’s writing is gritty and glittery. Sub Rosa is a beautiful feminist urban fantasy with sex-work activism at its heart.

Don’t forget to keep the queer book questions coming to stepaniukcasey [at] gmail.com or tweet @canlesbrarian. And add your recommendations for queer urban fantasy in the comments!