2013 brought equal marriage to the shores of the UK, and the gays were saved! Well not really. Or not much at all? Same-sex marriage legislation was a momentous achievement last year, and in this first installment of a three-part crash course in UK LGBT politics for 2014 we’ll explore what’s happened, where we go from here and why it matters.

In England and Wales, the Marriage (Same Sex Couples) Bill passed with significant majority votes in both the House of Commons and House of Lords and was granted Royal Assent on 17 July 2013. In Scotland, the Marriage and Civil Partnerships Bill passed Stage 1 (of 3) on 20 November. In Northern Ireland, however, the Assembly has repeatedly voted against marriage rights for same-sex couples and the Democratic Unionist Party has made clear that it does not intend to legislate on same-sex marriage in this term. 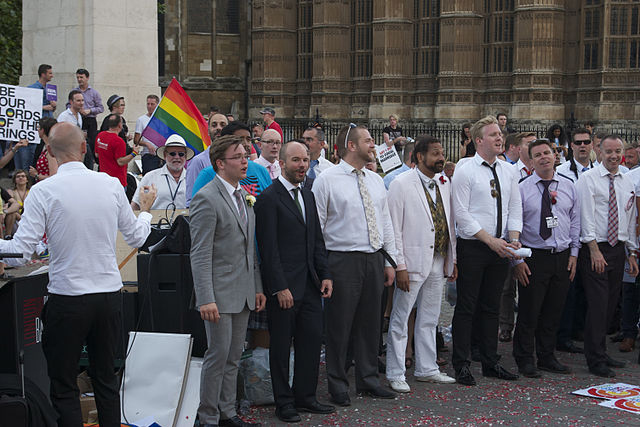 Same-sex civil partnerships, which offer similar legal protections to marriage, have been recognised under the Civil Partnership Act in all four countries in the UK since 2005. With the legalisation of same-sex marriage, the government has promised a full review and public consultation of this Act, including whether it should be extended to opposite-sex couples.

The next stage of Scotland’s Bill will take place on 16 January. While the Bill is backed by a majority of MSPs and the Scottish population, the earliest it is hoped to come into effect is 2015.

The England and Wales Act leaves much to be desired with regard to:

The Peter Tatchell Foundation and Equal Love Campaign have promised to lobby against some discriminatory aspects of the existing legislation if/when the government’s review of the Civil Partnership Act begins, but since same-sex marriages are a done deal at this point, it’s hard to imagine a strong, coordinated reform movement any time soon. It’s also unlikely that we’ll see the fervour of the gay marriage lobby transferred to other LGBT causes, such as homo/transphobic bullying and youth homelessness. 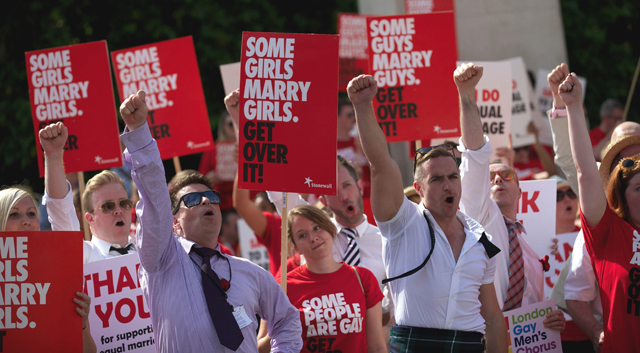 However, there is perhaps hope to be found in similar debates in Scotland. Unsurprisingly, the Church of Scotland and Catholic Church stand opposed to same-sex marriage legislation. As in England and Wales, religious bodies can “opt-in” to perform same-sex wedding rites and will not be coerced to do so, but thus far there is no indication that there will be a blanket ban similar to the one placed on the Church of England and Church in Wales. Additionally, the Equality Network believes that there is strong support among MSPs for five proposed amendments to the Bill that would more fully realise the rights of trans* and intersex people.

Stay tuned for the next installment of this mini-series on UK LGBT politics!