Donald Trump unfurled an upside down rainbow flag with the words “LGBTs for TRUMP” scrawled across it in black marker at a rally in Greeley, Colorado on Sunday. As Trump entered the stage, he beckoned someone toward him who then handed him the balled up flag. He paraded the flag up and down the stage in front of the crowd before handing it to someone else. He didn’t mention anything LGBT-related in the speech following this little stunt. 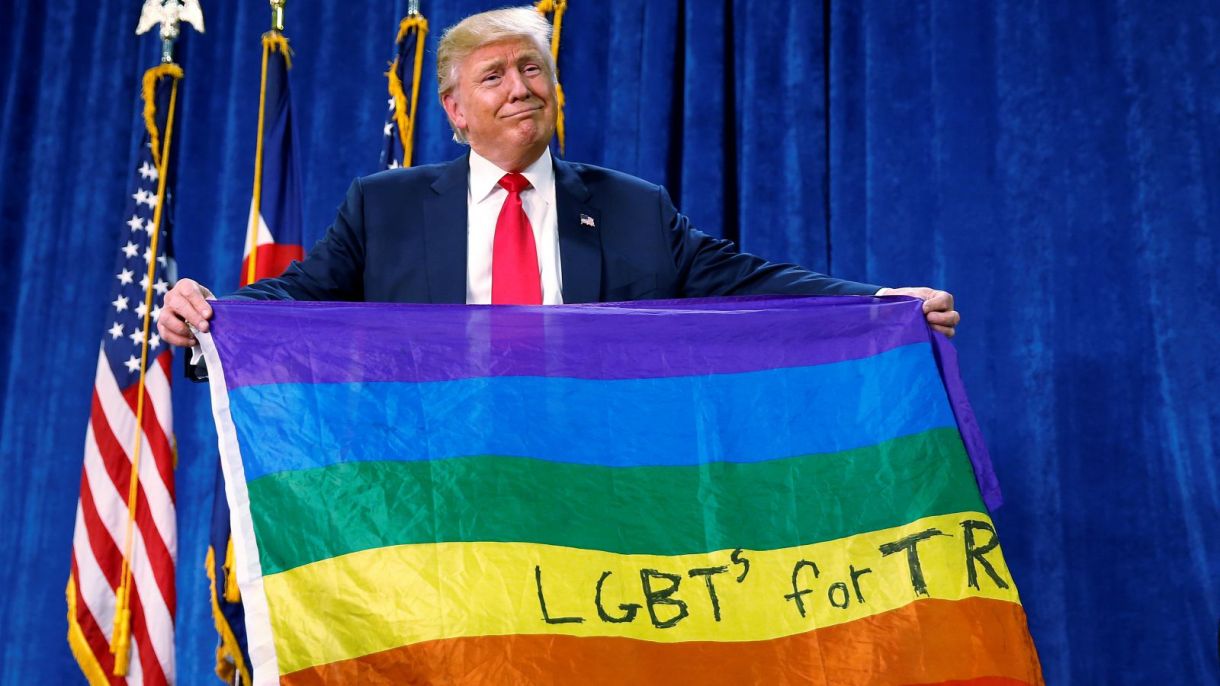 Trump’s small contingent of LGBT supporters said that the mainstream media wasn’t covering his action or that he made history. Chris Barron, co-founder of GOProud and founder of LGBT for Trump, tweeted the next morning: “Trump made history last night. MSM wants to pretend it didn’t happen. He’s the most pro-LGBT Pres candidate ever nominated by either party.” If you’ve even been alive the past year, you would know that that’s far from the truth. Trump does not have an official policy document that lists his supposedly pro-LGBT stance but has consistently laid out an anti-LGBT position through announcements and promises made to his party and anti-LGBT groups.

The most significant anti-LGBT stance Trump has taken is his promise to Catholics to sign the First Amendment Defense Act, which is similar to other religious liberty bills that would allow anti-LGBT discrimination disguised as freedom of religion. He issued a statement saying he would sign the bill, which bans the government from taking “action against a person, wholly or partially on the basis that such person believes or acts in accordance with a religious belief or moral conviction that marriage is or should be recognized as the union of one man and one woman, or that sexual relations are properly reserved to such a marriage.” If passed by Congress and signed by the President, the law would legalize discrimination against LGBT people in all sectors, from private businesses to public education.

Trump has also said he would appoint Supreme Court justices who would overturn the Obergefell decision which brought marriage equality last year. In one of the most recent presidential debates, Trump said he would pick justices that model after the late judge Antonin Scalia, who opposed marriage equality and generally all things progressive. Trump’s 11 top picks for the open seat were all white, mostly men and really anti-gay.

Not to mention Trump’s running mate is Indiana Governor Mike Pence, who signed his state’s antigay “religious freedom” law. He’s also voted against the Employment Non-Discrimination Act in 2007 and opposed Obama’s directive on allowing transgender students to use the bathroom that matches their gender, among other anti-LGBT stances he’s taken over the years.

In addition to Pence, Trump’s got a whole arsenal of Republican politicians who’ve been proposing and passing anti-LGBT laws since day one. Just check out what they’ve been doing lately in Congress. Republicans have been trying to undo Obama’s anti-discrimination executive order to protect LGBT federal contractors by prosing measures like The Russell Amendment. The Rewire reports:

But Rep. Steve Russell (R-OK) crafted broad language that covers recipients of not only every federal contract but also subcontracts, grants, cooperative agreements, and purchase orders—resulting in an amendment that could apply to many more workers than the initial 28 million estimate. Progressive groups contend that the Russell Amendment would allow religiously affiliated hospitals and universities, for instance, to wield the same discrimination over thousands of additional employees.

With less than a week till election day, Trump’s empty rainbow flag gesture was a meek way to pander to LGBT right-wingers, I guess. I mean, not even the Log Cabin Republicans endorsed him. His policies, along with the rest of the GOP, are proof that he really doesn’t give a shit about LGBT people.