It was fun while it lasted, wasn’t it? That one, brief shimmering moment in time when the government was mildly interested in finding out how many LGBTQ people live in this burning hellfire of a country. When we counted, literally.

That moment is over. 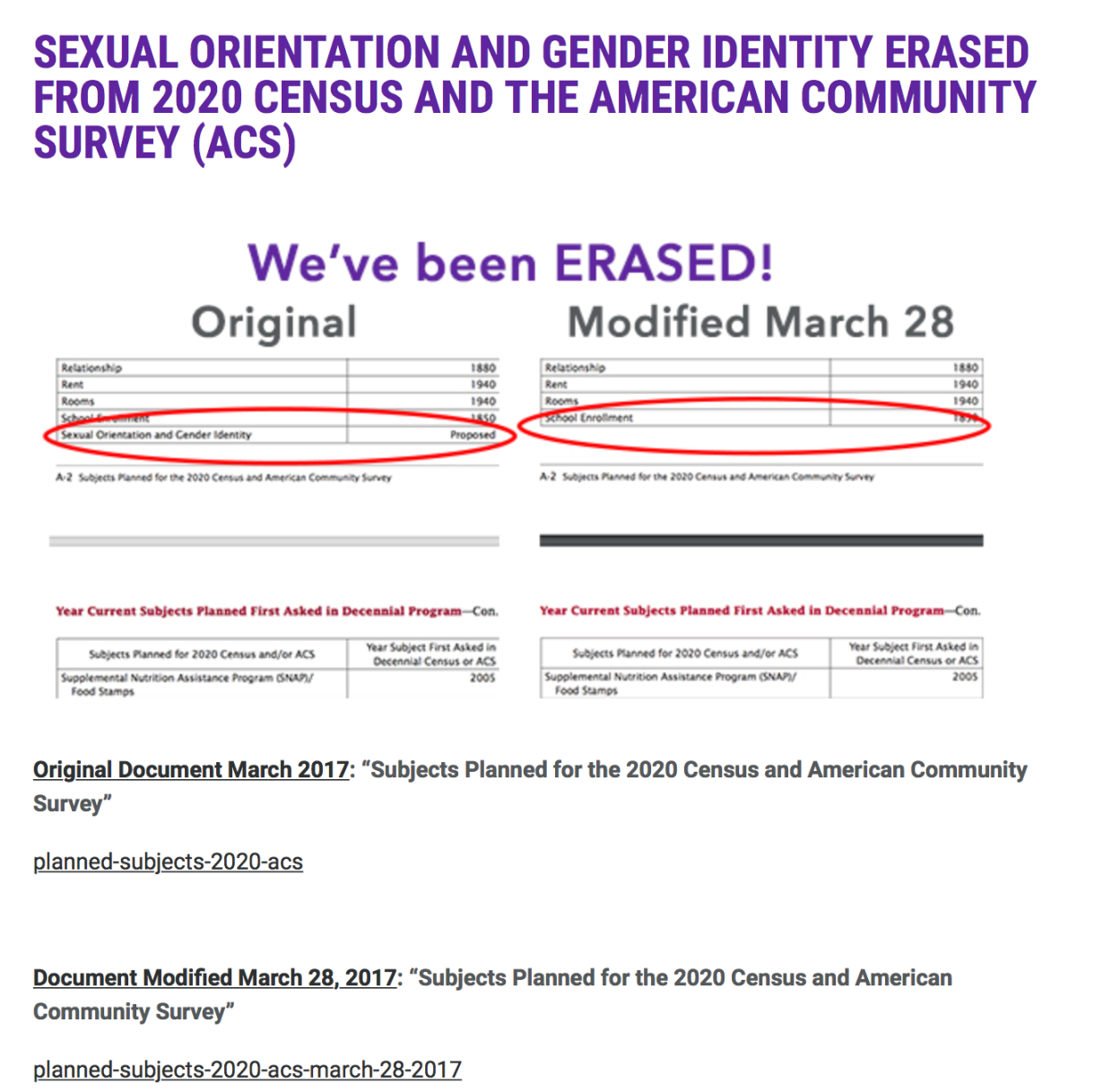 via The Task Force

From The National LGBTQ Task Force:

In this morning’s version of the Administration’s report, while it conspicuously excluded lesbian, gay, bisexual and transgender (LGBTQ) people on the list of “planned subjects” for the nation’s decennial census and longer form survey, “sexual orientation” and “gender identity” were included as “proposed” subjects in the appendix—indicating that data collection on these categories may have been in the works in an earlier version.

Including sexual orientation and gender identity on the 2020 Decennial Census Program would have been a major game-changer, providing an official count through both a “short-form only” census and the American Community Survey, which collects more detailed long-form data on a monthly basis. This has an enormous impact on the well-being of our community, as indicated in this statement from Meghan Maury, the Criminal and Economic Justice Project Director of the National LGBTQ Task Force:

Today, the Trump Administration has taken yet another step to deny LGBTQ people freedom, justice, and equity, by choosing to exclude us from the 2020 Census and American Community Survey. LGBTQ people are not counted on the Census—no data is collected on sexual orientation or gender identity. Information from these surveys helps the government to enforce federal laws like the Violence Against Women Act and the Fair Housing Act and to determine how to allocate resources like housing supports and food stamps. If the government doesn’t know how many LGBTQ people live in a community, how can it do its job to ensure we’re getting fair and adequate access to the rights, protections and services we need? We call on President Trump and his Administration to begin collecting sexual orientation and gender identity data on the American Community Survey as soon as possible and urge Congress to conduct oversight hearings to reveal why the Administration made the last-minute decision not to collect data on LGBTQ people.”

Way back in 2016, United States Chief Statistician Katherine Wallman told Time Magazine she was “leading the federal government’s working group on how to best gather data about sexual orientation and gender identity.” In April 2016, a bipartisan group had called on the government to include sexual orientation and gender identity in the Census, but at that time there were no plans to do so.

Up to this point, the best numbers we’ve gotten on LGBTQ community size have been through the Census’s cumbersome method of approximating numbers of same-sex couples through answers to questions about gender and relationships to other household members, and subsequent careful analysis of that data by The Williams Institute. (Basically everything we know about LGBTQ population size comes from The Williams Institute.)

The Census has been working to more accurately count same-sex couples, and as of 2014 was “testing new marriage and relationship questions on its surveys in hopes of producing more accurate numbers in the next few years.” This was to combat the apparently widespread problem of people checking the wrong gender box when answering questions about household members and other collection issues. Here’s one revision they were playing with:

The bureau was hoping to implement its revised relationship question on the 2020 Census, which could still happen — but that will ultimately require approval from the Office of Management and Budget. The current head of the OMB is Mick Mulvaney, a founding member of the House Freedom Caucus, who is generally full of shit. He co-sponsored South Carolina legislation to define marriage as being between one man and one woman as well as the First Amendment Defense Act, which would undermine anti-discrimination protections for same-sex married couples. The Census Bureau, like many other Bureaus these days, isn’t sure how much funding they’ll be getting from Congress in the ensuing years to do things like trial test its methods or execute follow-up visits to non-responsive people. There are already concerns about the accuracy of the 2020 counts in light of Trump’s crackdown on undocumented immigrants.

Data collected by social scientists reveal widely disparate potential answers to the “how many gay people exist” question, a saga of confusion and sadness we’ve been following closely for the last nine years. (Not having these numbers is especially vexing to journalists!) One recent survey of young people has revealed that a majority of 13-to-20 year olds do not identify as exclusively heterosexual, which is bananas and supports our sneaking suspicion that there are tons of gay people out there and therefore everybody should care more about us. Furthermore, data on same-sex couples clearly does absolutely nothing to help us get better data on how many transgender people exist. This would be really great to know because the transgender community faces astronomical rates of poverty, victimization, abuse, homelessness, suicidality and depression, and therefore is in especially desperate need of services and programs that often rely on federal government funding. From Time Magazine:

…the true scope of [outsized hardships faced by LGBT people] can only be fleshed out by large-scale data collection—and such information will make it a lot easier to get the resources needed to fix problems like the extremely high rates of poverty experienced by transgender people and gaps in parental rights affecting gay couples with children, particularly if the numbers have the authority of being produced by the government itself.

This news comes shortly after last week’s big news that the Department of Health & Human Services is planning to eliminate questions about sexual orientation from its National Survey of Older Americans. (One of our Senior Editors, Heather Hogan, has been working on a story about this that we’ll be publishing next week.)

Although I cannot find independent verification of this, the pro-Trump propaganda machine The Washington Times (which I refuse to link to, but here’s a screenshot) claims a Census Bureau spokesman had determined there was “no federal need” for collecting data on sexual orientation and gender identity. In an alleged statement, said spokesman said:

This will be good news for the readers of The Washington Times, who earlier today were very concerned about Uncle Sam “prodding” you for this information.

This will be bad news for… everybody here.