35 LGBT Rights Organizations have come together to issue an open letter demanding justice for Trayvon Martin. These groups represent diverse interests but operate under the same belief system, recognizing that it’s our collective responsibility to call out and fight inequality and injustice in all its forms. I have pasted the entirety of the letter here, which you can also read on the website of the Transgender Law Center. The list of the organizations who collaborated on this letter is at the end.

We cannot begin to imagine the continued pain and suffering endured by Trayvon Martin’s family and friends. We stand in solidarity with them as they continue to fight for justice, civil rights and closure. And we thank everyone who has pushed and will continue to push for justice.

Trayvon Martin deserves justice and his civil rights. We support the organizations and community leaders who are urging the federal government to explore every option to ensure that justice is served for Trayvon and that his civil rights are honored and respected. But our work does not end there: we will honor Trayvon Martin by strengthening our commitment to end bias, hatred, profiling and violence across our communities.

We represent organizations with diverse lesbian, gay, bisexual and transgender constituencies. Our community has been targets of bigotry, bias, profiling and violence. We have experienced the heart-breaking despair of young people targeted for who they are, who they are presumed to be, or who they love: Rashawn Brazell, Lawrence King, Ali Forney, Brandon Teena, Brandon White, Matthew Shepard, Marco McMillian, Angie Zapata, Sakia Gunn, Gwen Araujo and countless others.

Every person, regardless of race, religion, sexual orientation or gender identity, must be able to walk the streets without fear for their safety.

Justice delayed is justice denied and in the words of Dr. Martin Luther King Jr. “a right delayed is a right denied.” We honor Trayvon by seeking justice for all people. 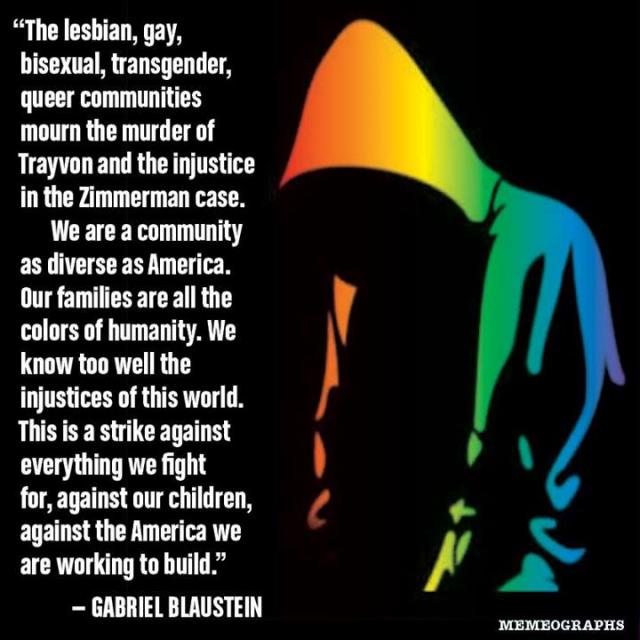