Hello and welcome to the very first episode of Transparent, the new Amazon exclusive show that we’ve been talking about since February. It features a family with adult children whose parent comes out as a trans woman, and have A Lot of Feelings. Maura, the trans woman and parent referenced in the title, is played by a cis man, Jeffrey Tambor, which is not ideal for many reasons but is, I guess, the world we live in. To be clear, Maura isn’t out to her family as a trans woman for much of this episode, but we’ll refer to her as Maura and with she/her pronouns.

We open with a montage of waking up, which would definitely not fly in a creative writing class but I guess that’s why we’re on TV instead. A girl with frizzy hair is making coffee in a small apartment out of a cheap coffeemaker: I spy a Shiftless Twentysomething. I know my own kind.

Maybe I can find a job somewhere in this mug

Next, we move to a naked bearded man waking up next to some sort of Scandinavian skincare model, and prodding her to wake up and make out with him even though she is clearly very sleepy. I feel confident in identifying him as a Disaffected Manchild. This is also the point at which we realize how many naked boobs there are going to be in this show. It’s a lot of boobs, it turns out!

Next is a household that appears to have been constructed solely as a showroom for very expensive kitchen appliances. This All-American family has a housekeeper/cook situation and also a minivan, seems like a strong possibility of a Stifled Soccer Mom.

In a park, we see Ali — the Shiftless Twentysomething — on a walk with Carrie Brownstein, who is dressed in an outfit you could base an entire episode of Portlandia on. 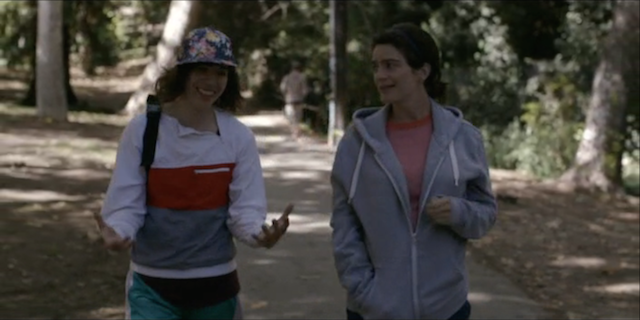 And so she was like “you really think you can eat a jelly donut this big all by yourself?” And I was like “yes.”

Ali wants to write a book for twentysomethings based on “Are You My Mother?” called “Are You My Soulmate?,” but is distracted by staring at a dreamy personal trainer in the park. Sadly we don’t get to hear more about this book project which would surely have been the biggest thing to hit the literary scene since Lena Dunham wrote a collection of poems in the voice of each of her childhood stuffed animals because Ali gets a call from her dad. What could it possibly be about? “Dad” isn’t really correct, maybe, but it’s what all the kids think at this point and what Ali says to Carrie Brownstein; I’m interested to see what the show does with parental titles as it moves forward.

Starsweep to inside the minivan of suburban bliss, where Sarah is getting a similar call. We don’t hear any of these calls, or Maura’s voice.

OnStar are you there? Are you listening? What do you think I should bring to the potluck? God I’m so alone

Elsewhere, the already-insufferable cup of brogurt is announcing something is “tweetable.” Is that better or worse than “tweetworthy?” I don’t know and I think we can all agree that the better choice would have been to just announce “I’m tweeting this,” or maybe just shut up forever and sail off into the ocean alone. The Scandinavian skincare model and another girl who looks identical to her are hanging out in really improbable poses while one of them knits an ugly-chic scarf from an extremely tangled pile of yarn that’s making me twitch just looking at it. Is this what happens on the L Word for straight people? Is this the way that they live? Ali shows up, and there is some concern that she will smoke all the weed. I think you’ll recover, buddy.

Really excited to use this as the wallpaper for my phone, laptop, tablet and Zune

Sarah the Stifled Soccer Mom is at the daycare center when she runs into the dreamiest butch who ever butched. You can tell she wears a really nice but not overpowering cologne and has really soft hands. Tammy the Dreamiest Butch is now on her second marriage, and she and Sarah are both real happy to see each other. Tammy confesses that her five-year-old daughter got in trouble for biting another child, and for some reason this makes me about fifteen times more attracted to her. Will have to make a note to bring that up in therapy. 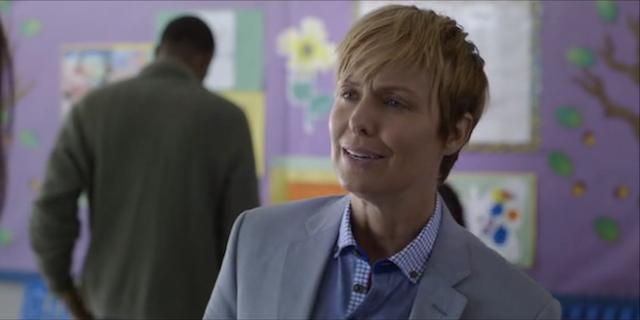 Yeah, right between your two front teeth. No, it’s still there.

Sarah runs through the list of her kids and breaks the news that she’s married to a man, but this does not seem to present an obstacle as the conversation quickly transitions to how they should “get together” and “have a playdate,” which is definitely the mom version of “come over and watch a movie in my dorm room.” Tammy puts on a pair of aviators and I have to take a brief recess to fan myself. 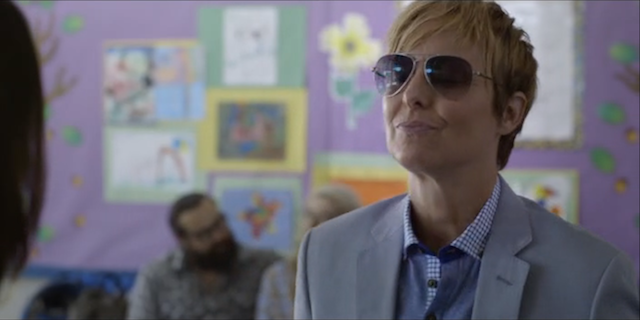 Back in the BroCave, which looks like it would cost even more than my student loan debt, Ali and Josh are discussing what percentage of the Scandinavian girls (who are a band, I guess?) he’s sleeping with and whether it would more accurately be defined as “fucking” or “making love.” I can’t report much about this scene due to sticking my fingers in my ears the whole time because the idea of discussing intimate details of your sex life with a sibling is so gross to me. Also because for some reason when men specifically say “make love” it makes me nauseated.

And then you just squat all the way down, do 10 kegels, and jump back up. I’ve been doing these fifteen times a day and now I can lift a car.

Ali and Josh discuss the phone call that all three of the siblings have gotten, which it turns out has been inviting them all to a family dinner in their childhood home. The informed viewer can guess that this is an opportunity for Maura to come out to her kids. But the kids don’t know that, and the prevailing theory is that their dad has cancer, and Josh’s reaction to this possibility is an extremely callous suggestion that possessions should just be distributed now, for tax purposes. It seems clear that Josh is, unfortunately, a smoldering pile of human garbage.

The human-garbage hypothesis is strengthened when, upon arrival at the dinner, Josh announces that the food in question has given him “a boner in his tummy.” I feel concern that maybe straight men do not know how to express human emotion without boners as a reference point. Does joy feel like a boner in the heart? Does depression feel like erectile dysfunction of the brain? This is truly a demographic in crisis. The only bright spot in this particular scene is that Ali and Sarah are both wearing flannel because the family that gays together stays together. An alternative to the cancer theory is floated: what if this dinner is instead about an engagement? That would be sweet. Viewers know that this is not, in fact, the case, and is pretty much definitely actually a coming out.