In a campaign rife with sexism, media outlets were rightfully scolded for focusing on what Hillary wore on the trail. Hillary’s clothing and the gendered expectations for her appearance even fed some of the scandalous rumors she dodged on the trail: Was she wearing high necklines because she was sick? Why did her suits cost so much money? How much clothing did she carry around, anyway? Other times, her outfits purportedly revealed her dedication to the mission underlying her bid for the nation’s highest office: Purple to unify us in the wake of the election, white to remind us that she was daring to be first, and a red suit, a blue suit, and a white suit for the three debates to affirm her love of her country.

When I was a freshman in college, my mother took me shopping for a suit. I was about to start my first internship in Washington, DC, at the Feminist Majority Foundation no less, and they had told us that we may occasionally require a jacket or a suit to talk to members of Congress or otherwise fit in with important people. We went in with one mission: Find something Hillary Clinton would approve of. Back then, Hillary’s pantsuits were fodder for jokes outside of the nation’s capitol, but I always revered her and understood how her colorful ensembles both bucked gender roles by screaming in pastels and pinks where men’s suits whispered in black and navy blue and helped fit her into a patriarchal system where masculine power — i.e. wearing the pants — means everything.

I still sometimes wonder what Hillary was wearing on November 8. Do you think they’ll ever tell us? I still wonder what she had planned to wear to her inauguration, or to her first State of the Union. I still wonder what it would have looked like to finally see a pink or blue or yellow or green pantsuit in behind-the-scenes photos from the White House, Hillary with one hand holding up the phone in the Oval Office and the other holding up a freshly printed report.

If there’s anything we learned from Hillary in 2016, it’s that she would have gotten the job done without losing a breath, and she would have looked damn good doing it. These ten pantsuits from the last year she spent on the trail prove it. 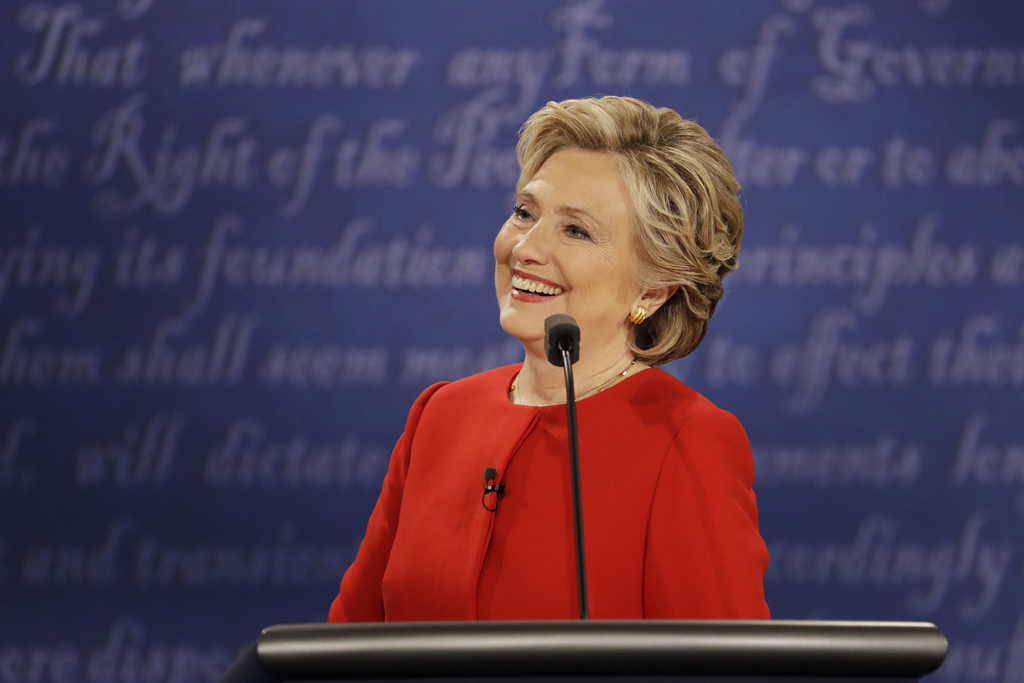 Watching Hillary Clinton debate anyone is always a thrill. Hillary Clinton has never lost a debate, and I enjoy watching her win them, especially since in doing so she destroys the men around her like it’s feminist praxis. (Honestly, it kind of is.) When debating Donald Trump, Hillary not only won a battle of the wits but also withstood childish attempts to tar her character, dismiss her record, and physically intimidate her with a smile on her face. Even better, she wore three outfits — one red, one white, and one blue — to remind us all that she was the one true and last hope for the nation. Her red outfit was my favorite, because at one point during that debate Donald Trump said he had a solid temperament and she giggled in a way I’ve rarely witnessed before. When I watch her speak about policy and political strategy, I become a heart eyes emoji, but in that instance I became an ice cream cone melting on the side of the road. 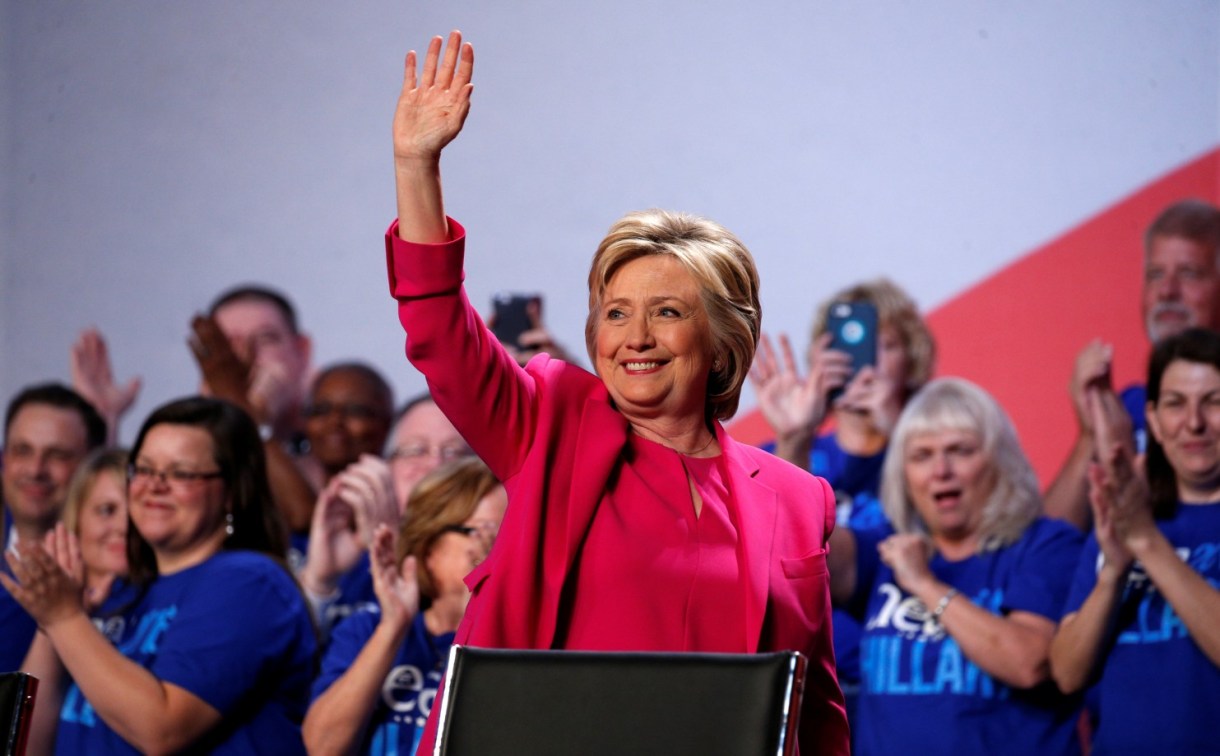 Wearing pink when you’re a woman in politics is a daring move. I wish Hillary Clinton wore pink everyday, was escorted around in a caravan of pink Cadillacs, and had designed her campaign materials in hues of baby pink and baby blue a la my bid for American University Student Senate. I love pink. I love Hillary Clinton. I love this. Bonus points for the fact that MSNBC used an image of Hillary in this pink suit for their primary coverage, so every single time she won a state her adorable face and a hint of pink appeared on the screen. That is what feminism looks like.

8. The Pantsuit She Was Wearing On My Birthday 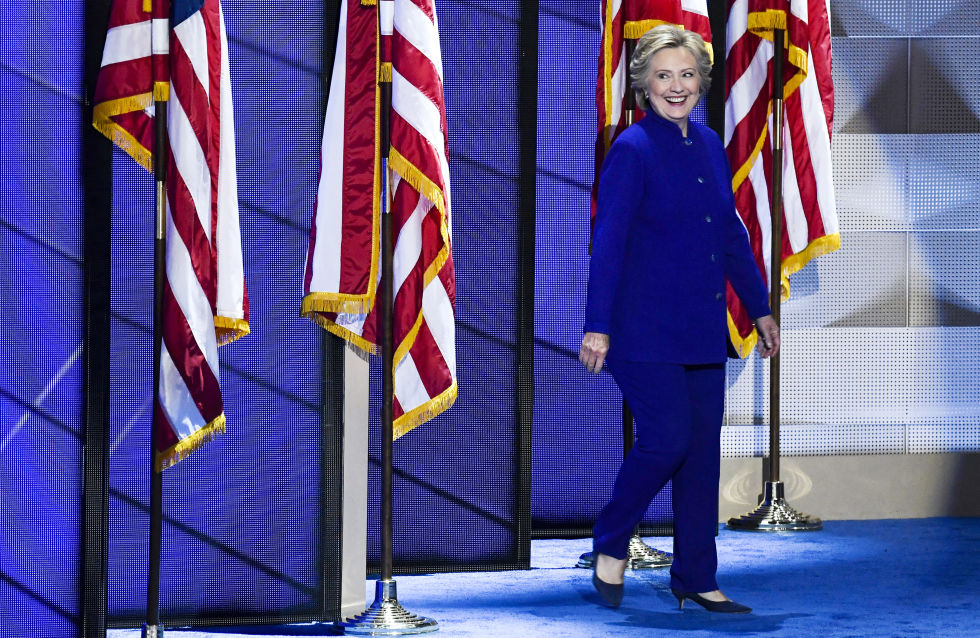 I was at the Democratic National Convention this year, and the day after my actual birthday was the day Hillary Clinton was slated to speak — the last day of the four-day event. She made a surprise appearance on the night of my actual birthday, though, walking out to be held in Obama’s arms. Her outfit was on-point, and her presence made the room explode. I missed the moment in real life because I got stuck in a hellscape section that night and bolted from a sea of mommy bloggers because I couldn’t see or hear anything that was going on, but when I saw GIFs of it the next day I openly wept. Thank you, Hillary, for the best birthday gift a girl like me could have asked for: You.

7. The Baby Blue Pantsuit She Wore to Introduce Us to Tim Kaine 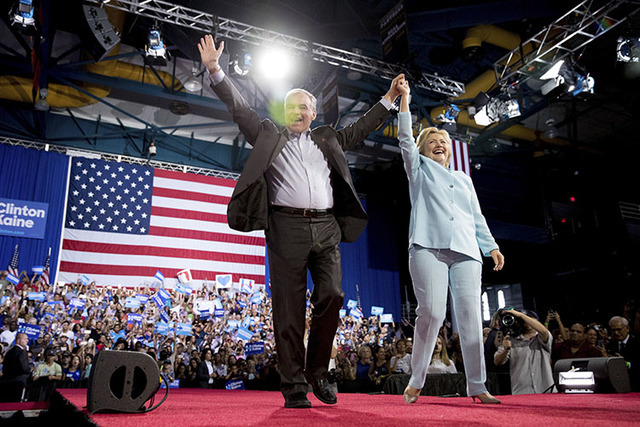 Okay, this whole thing was just cute. They fist-bumped, y’all. It was so cute. Almost as cute as watching Tim Kaine literally overflow with a deep love and admiration for Hillary Clinton for the months he spent as her VP-to-be. Also, this pantsuit looks a lot like the baby blue pantsuit the Hillary Clinton action figure wears, so. (Here’s a moving essay about that doll and the death of our dreams!) 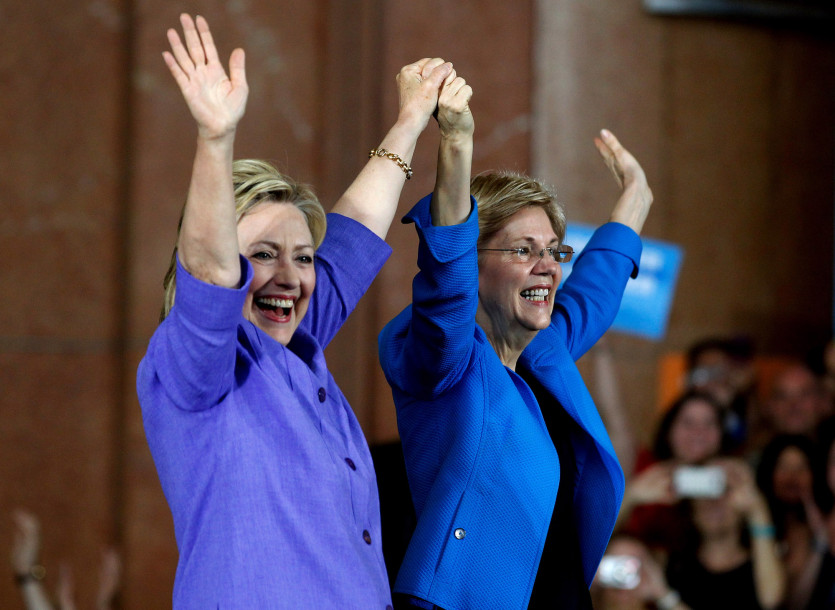 When Elizabeth Warren finally endorsed Hillary Clinton and began a general election social media movement of trolling Donald Trump artfully, it felt like we were on the brink of matriarchy. (I liked it.) When they appeared together for the first time during the presidential election at a campaign rally in matching blue pantsuits psyched as fuck to be preaching feminism to the choir, I’m willing to bet every last suffragist rose from the dead and haunted a white man just for kicks. 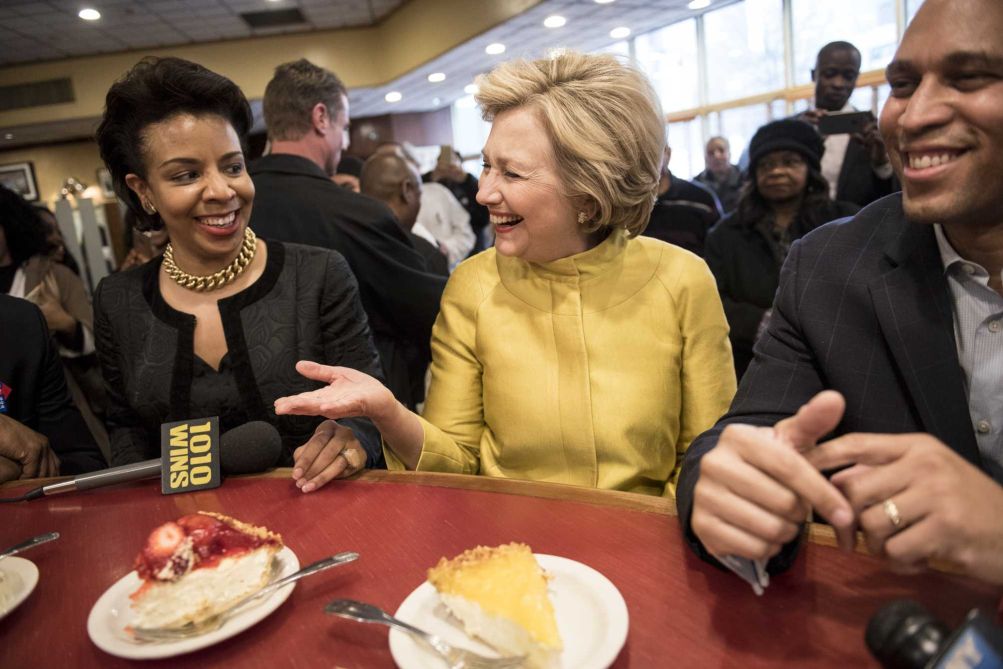 Is that jacket woven with a precious metal? Because girl, this look is solid fucking gold. Also: Can I please eat cheesecake with Hillary Clinton before I die.

4. The Leather Jacket Ensemble That Inspired Me to Write Poetry

oh, be still my heart
it fits you perfectly, girl
will you marry me pic.twitter.com/40H0daEPVD

When images began to appear in my Twitter feed of Hillary Clinton in a black leather jacket I legitimately passed out. I called my coworkers, posted on social media, and texted Keely about it just so that if I blacked out, I would remember it happened. And when she, the woman I will love for the rest of my life, began appearing in it over and over again, well, I began planning to purchase a tiny home to plant on the White House lawn when she was president that was small enough to go largely unnnoticed by right-wing media operatives but big enough to encompass our love. Then I wrote some haikus about her. Our love is pure and true and I hope one day Hillary Clinton finds me not in the Chappaqua forest but in the Mojave and lights a cigarette in the driver’s seat as we embark on our lives together. 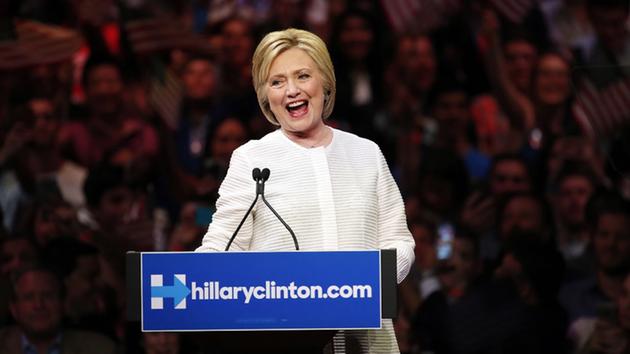 Just like in 2008, Hillary Clinton went all the way through a 50-state Democratic primary in 2016. This time, though, she won. On June 7, she declared herself the presumptive nominee of the race after having claimed enough pledged delegates to rightfully do so, referencing in her speech to supporters that night that she intended to smash glass ceilings and cement herself — and all of us who stood with her — into the centuries-long fight for women’s seats at the table in politics that had started in Seneca Falls. She wore white. She wore white because suffragists wore white when they stood in rain and snow outside of the White House, holding up banners that read “How Long Will Women Have to Wait for Suffrage.” She wore white because she, like them and the women who have come since and honored them since, knew the answer: a long fucking time, babe. 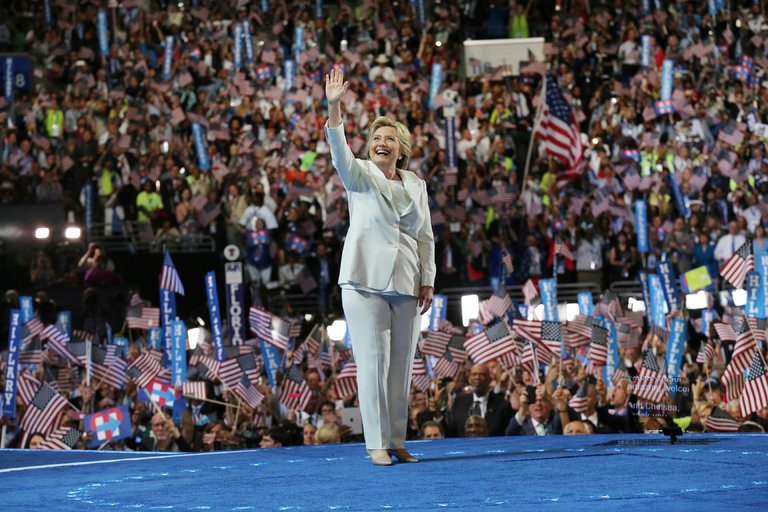 I was so moved by Hillary Clinton’s speech at the Democratic National Convention that a wrote a good chunk of an essay about it. If I write about it here, I’ll cry, and I’ve already cried writing this multiple times! Let it just be known that Hillary Clinton’s commitment to honoring her place in history is not only deeply moving to me as a feminist and a woman, but also as someone who deeply admires Hillary Clinton. To watch a woman who has been so embattled throughout her life proudly dare to run and win the nomination of a major party is inspiring enough. To watch her do so proud to declare that not just she alone, but the history she would carry on her back, was worthy of praise and celebration meant — and still means — everything. Hillary Clinton’s gender mattered. What could have been would have mattered greatly.

In 2008, when Hillary Clinton conceded, she told us to take heart in knowing that a woman winning a state in a major party primary would no longer be remarkable. We were one step closer, she assured us, to finally watching one win a primary race overall. She knew then, and she knew in July 2016, why it mattered so fucking much. Wearing white just reminded us that she wasn’t going to forget, or let us forget, for a single minute.

1. The Pantsuit That Proved We Didn’t Deserve Her 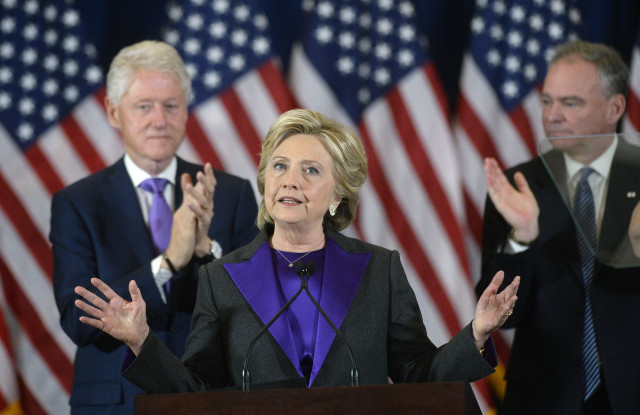 I watched Hillary Clinton’s concession speech on my phone. It was docked on my dashboard and I was driving to work. I was sobbing uncontrollably and I think watching a video while you drive is illegal and I was smoking a cigarette and it felt like the entire world was weeping and it almost felt selfish to be crying when she wasn’t but I was. She looked strong and powerful. She reminded us that we had to keep going. She reminded us that we had to learn, as a nation, to come together. But I later learned that the greatest message was hidden all along where we all should have expected it but didn’t: Her purple-hued pantsuit. A pantsuit the color of red and blue mixed together. A pantsuit that stood for a nation united. A pantsuit that proved we never deserved her in the first place.