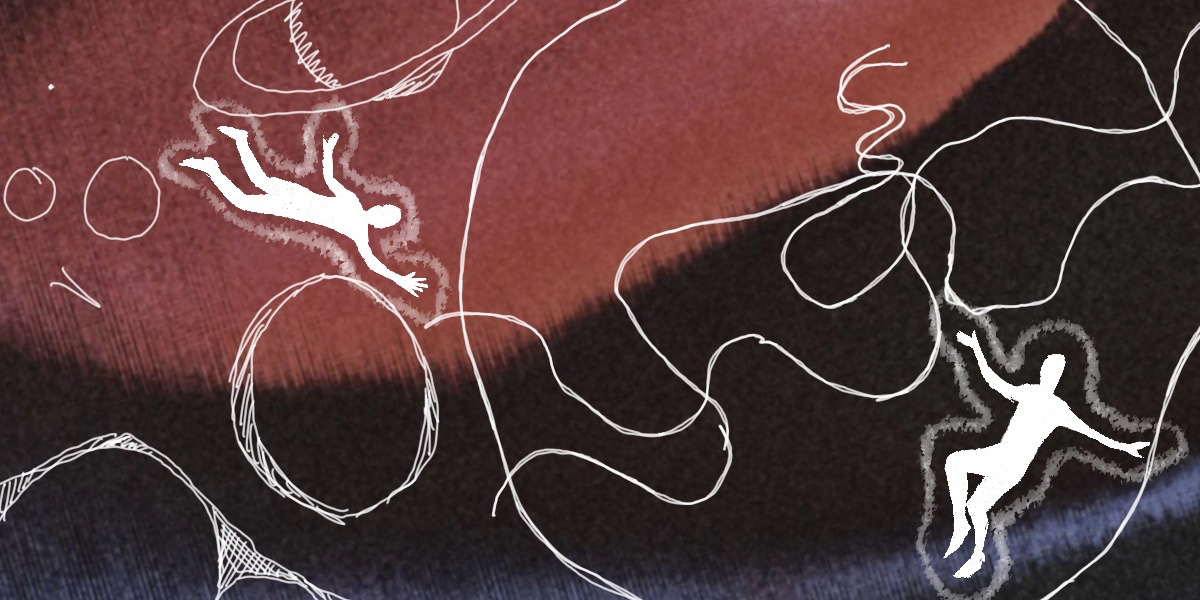 My partner and I started our relationship at a distance. C was on Eastern Time. I was on Mountain Time. He was always two hours ahead and sometimes I asked, Was it a good two hours? What will happen? Will I like it?

During our very first conversation, C said, I promise I’m good. He said, Do you want to see a letter of recommendation? The letter he showed me was from his elementary school music teacher. She wrote: C is talented, but disruptive, talks too much to his classmates. I’m six years his junior and was a baby at the time, disruptive, probably, but not with words.

Long distance relationships are hard in obvious ways and easy in unforeseen ways. Hard because bodies because touch because the logistics of a hug. Easy because most things are beautiful from afar. I like looking at spiders on the internet and I can drink a cup of tea while I watch a video of a fire burning a whole coast to the ground. Once, in the Midwest, I stood on a balcony with a glass of Syrah and saw a drunk tornado swaying its way through a cornfield; I took a photo with steady hands.

C is from Kentucky; I’m from New Zealand — our homes are separated by eighteen hours. He’s six years older than me, but sometimes five. His birthday is in December, mine is in July, but we were both born into the winter.

Six years isn’t long, but he was born into a world that had a Soviet Union and one that was still fighting the Cold War and one in which New Zealand didn’t yet have access to the internet.

C had a sick mother. He grew up fast in the way we do when our adults need us to. Growth is mathematical and fixed in some ways and also emotional and fluid. As a kid, C learned about illness and aging how flimsy the façade of adulthood. His body grew fast, too. He was taller than the other kids, his voice deeper, his biology racing to catch up with his brain.

I grew up slowly and then all at once. I grew up according to man-logic. I turned 18 and was suddenly an adult, not because I was officially legal, fair game, but because my mother got sick, too, and I found myself with brothers to care for, a diagnosis to research, and still school to graduate.

C and I talk about our mothers’ sicknesses in different tenses. I use the past and he uses the present, but the truth must be somewhere in between. A new tense, for things that have already happened but that we carry with us through time.

When C moved to be with me, we were still operating on different clocks. He woke late, the morning already brewed, whereas I woke before the light and drank coffee in the dark. He wanted to stay up deep into the night, but my eyes have always tried to close with the sun. He left dishes sit in the sink until morning. He did his laundry most days, half-loads. He didn’t shower first thing.

It seems so trivial to bring up cutlery when you’re in love. These are the little things we let build and grow. They’re small until time has its way with them.

That extra 0.24 of a day, a quarter, almost, was accounted for by problematic queer icon, Julius Caesar, who announced that there would be an extra day every four years and that this would solve the problem of time, almost. 0.24 is not quite a quarter, see, it’s a sliver, 0.01, away.

Ideas do not function outside of time, but they are not strictly beholden to its passage. They’re something different, inflatable, transparent, which doesn’t make them less real than something tangible and tethered to time and space, but it does make them harder to define and communicate. I can give C the dish soap and it’s the same bottle in his hand as in mine, but it means something different to each of us.

C says, We have never had a relationship problem that was not communication-based. I say, My problem is that you are taking all of the cups in the house and leaving them in different rooms.

C is a better communicator than me. He knows what he feels and can articulate it. Whenever I try to grab hold of a sadness or fear it falls through my fingers like sand. C is always asking me what’s wrong before I’ve figured out that something is.

In 1582, Pope Gregory XIII was informed of the misaligned seasons courtesy of Caesar’s temporal band-aid. Greg, in an incredible display of Masculinity™, skipped the world forward ten days and decided that leap years would not occur on years evenly divisible by 100, unless they were also evenly divisible by 400. He called this the Gregorian calendar.

My friend, T, was born on February 29 and is (on a technicality) only seven years old because her birthday happens once every four years. Once, she said, At the rate the world’s going, I’m not going to make it to adolescence.

When I was 21, I dated a man who was developing a program that would monitor and report to the public the daily increase in corporate carbon footprints. He was twelve years my senior. He said, But you’re wise beyond your years, and, You’re so mature for 21, which made our age difference flattering to me and still creepy as hell to everyone else.

T was the only person to tell me the age-gap wasn’t great. She said, about him, He’s operating on DiCaprio logic. He understands time as a masculine issue and age as feminine one.

Despite the fact that T is seven, we’ve been friends for ten years. Friendships almost get to exist outside of time in a way that romantic relationships cannot because: Are you going to move in together. And, Get married? And, Have kids?

Time is cisgender and heterosexual because it prioritises the biological and the reproductive.

I kept my bisexuality a secret from myself until early adulthood. To recognise your sexuality as different from the one you assumed to be true is a sort of re-meeting of self. It sets you back a bit. It introduces a temporal messiness, overlap, glitch, see, I had a second first kiss.

The first woman I dated was younger than me. She said, This can never be serious. She said, Your queerness is brand new. You’re an infant.

T’s parents filed for bankruptcy and moved back into her grandmother’s place. Her little brother sold his company for tens of millions and bought a five-bedroom, six-bathroom, with a pool.

C wants kids and I might too, but I can’t see that far into the future because I don’t know whether the future extends that far. I tell him, Everything could be different. I tell him, What if the world ends. For work, he designs and markets climate summits. I can’t remember whether I’m allowed to recycle coffee cup lids. Maybe it’s easier to be optimistic about a future if you’re actively doing something to ensure it.

In six years, the world’s average temperature is projected to reach 1.5 degrees Celsius (2.7 Fahrenheit) above its pre-industrial level, which will result in oppressive heatwaves experienced by 14% of the planet. In six years, the Middle East could become too hot for humans to endure and most of the planet’s coral reefs will have dissolved. Six years is not widely considered a large age gap for two people in a romantic relationship, but sometimes I feel jealous of C, that he experienced six extra years at the easier end of our disaster.

It’s selfish, to consider the climate crisis on a plane with my relationship, but, if there weren’t love, I’m not sure what we’d all be so worried about saving.

The truth is, C might leave empty cups on every surface in the house, but he also fills a glass of water and sets it on my nightstand before bed. The truth is, he might prefer to wash dishes the next day, but, when he does, he scrubs them so clean they shine.

We’re moving to New Zealand, C and I, where everything is slower except for time. The internet, shipping, the pace of daily life, but New Zealand is one of the first places in the world to see the sun. In New Zealand, things feel less apocalyptic, like a future might still be possible.

We’re moving to New Zealand because I got a job. It’s a year-long position. C has a six-month visa. I’m here already, but C doesn’t fly over for another eight weeks. I called him, just now, to tell him I love him and goodnight, but he didn’t pick up because it’s too late over there. Too late and yesterday.

Diana Clarke is a writer and teacher from New Zealand. Her debut novel, Thin Girls (Harper Collins) is out now. Her second novel, The Hop, is forthcoming from Harper in 2022.