Pumpkin beer is either this thing you have ridiculously intense feelings for or some type of orangey beer trend you don’t understand. Putting a vegetable into a brew probably sounds like a weird idea, but trust me, it’s infinitely better than carrot beer. Although it may seem like a relatively new phenomenon the practice goes back to Colonial times. If there’s one thing that I love about humanity, it’s the resourcefulness shown when turning seemingly random ingredients into good old fashioned alcohol.

I went to Beer School at Beau’s Oktoberfest in Vankleek Hill on the weekend. Even though I went for the charcoutine, growlers of Lug Tread Ale, German whip dances and my share of tiny free hats, I managed to stay sober enough to learn about my one true autumnal love. Dick Cantwell of Elysian Brewing spoke about the brew’s modern reinvention from an experimental throwback to a cult favourite that causes grown adults to erupt in temper tantrums when they failed to get a sip. 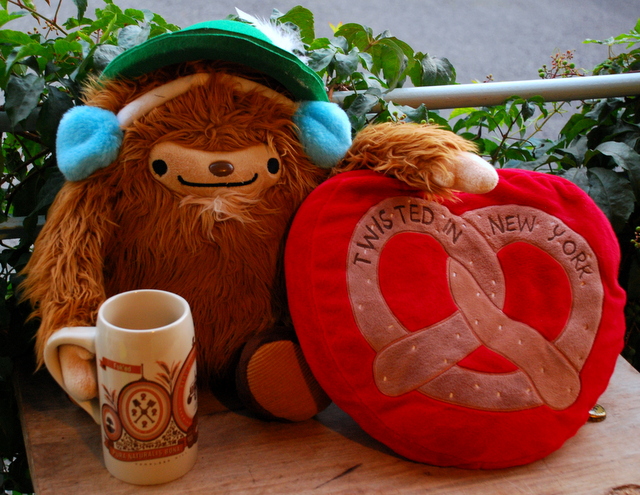 This is a 90% accurate depiction of what I look like at Oktoberfest.

A drunken history lesson is all well and good, but that still doesn’t tell me what a pumpkin beer is! Is it beer? Yup. Does it contain pumpkin? Well maybe. Does it need some pumpkin? Sorta. Wait, can I make pumpkin beer sans pumpkin?! Yeees.

Pumpkin beer is a catch-all term for beers that are pumpkin-ish. Although pumpkin beer may seem like a no brainer, it actually can get to be a bit misleading. In the same way that some pumpkin spice lattes don’t contain any pumpkin, some beers don’t contain any pumpkin.You could blame that confusion on Buffalo Bill, the first  modern day brewer to resurrect the style in the 80s. Although he dutifully mashed the gourds in his original brew, he ended up forgoing the gourd in his subsequent batches. In his hands, pumpkin beer became synonymous with pumpkin pie as opposed to the vegetal sphere. Part of me wants to hate him for showing such disrespect for my hallowed gourd, but if it weren’t for him I probably wouldn’t be drinking pumpkin beer to begin with.

For a pumpkin beer to be considered such, most brewers just go with the spirit of pumpkin and the season. Does it remind you of Thanksgiving? Do you wanna curl up by a fire? Did four thousand scarves magically materialize around your neck once you took a sip? Then we’re heading in the right direction. Oversized gourds, canned pumpkin mix, vanilla, brown sugar, tons of ground spices and orange colouring all have their place somewhere under the giant orange umbrella. Brew Do Brew. Some brewmasters will dutifully add the flesh to their mash, kettle and fermenter whereas others will simply finish their ale with grandma’s perfect balance of cinnamon, ginger, nutmeg and allspice. Heck, Cantwell himself says that pumpkin can be “too vegetal” so that’s why it’s great that Elysian and other breweries are willing to try anything when it comes to balancing out the beast.

Given the loose definition, Pumpkin Beer season has allowed a lot of craft brewers to put on their experimental hats when creating an autumn seasonal. Although beer snobs may firmly rest in Camp Ale or on Team Porter, pumpkin beer transcends all of the labels and can unite these families or tear ’em further apart. Wanna make a chocolatey stout? We could do that. An autumn hefeweizen? Weiss the fuck not? A Mexican themed beer using pumpkin seeds, cumin and chiles? Done. Fill a 500lb pumpkin with ale and tap it once it’s finished? That sounds like a most excellent idea that we’ll make into a tradition. 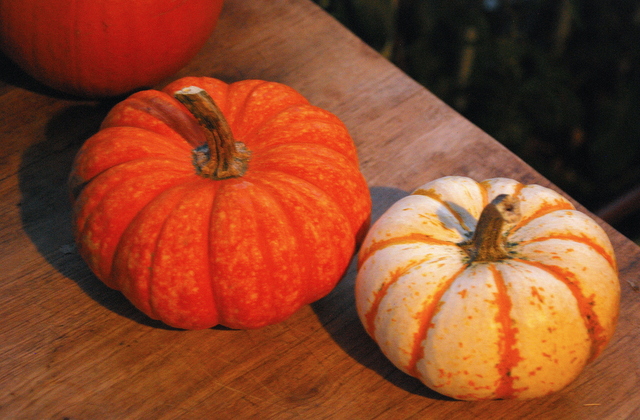 It’s probably disturbing how many pumpkins I have in my house.

Given how diverse the pumpkin beer spectrum is, of course we have a lot of feelings (positive and not so positive).

I love this one a whole lot because of the brown sugar/spiced flavors. It has a perfect balance of pumpkin and brown sugar flavor without being overboard. Good for beginners to pumpkin beers, too. – Zeller

I cry about how much I love pumpkin sometimes. – Carmen

Touted as the original pumpkin beer, this was one of the first ones I tried. It’s a good starter pumpkin, with mellow flavor, spice, and tastes like fall. I don’t drink it as often because it can sometimes taste watered down. – Zeller 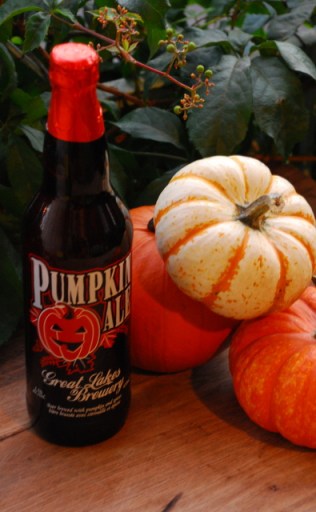 This is the surprise winter ale that’ll save the day when every other brewer has run out of their pumpkin offerings. Sweet and well spiced, this beer definitely lies in the pumpkin pie end of the scale. There’s a bit of anise and citrus action in there that stops the sweetness from bulldozing your tastebuds. Although it isn’t my favourite, the fact that it dominates the pumpkin beer scene mid-December means it wins by default.

I want my beer to taste like beer. but i’d prefer if my beer were champagne, or red wine, or possibly chocolate milk. – Vanessa

I’m allergic to an overload of cinnamon (for example, Big Red gum gives me canker sours all over my gums and cheeks) and I find that a lot of pumpkin beers really overdo it on the spices. My favorite pumpkin ale has a blend of sour and Elysian pumpkins. It blends the tang of sour with pumpkin and cranberries. Kick kind of smells like apple jolly ranchers. The sour notes perfectly balance the rich pumpkin spice and hits you in the back of your gums, but leaves you wanting another sip. It’s an 8.5%, so I’m not sure how it measures up to other pumpkin beers, but I usually drink a pint and feel satisfied. Kick is best enjoyed on a warm, breezy Fall afternoon. – Hansen

One of the best ever. It has a very strong pumpkin flavor and taste, doesn’t taste watered down like a lot of flavored beers are. It’s a pretty spicy beer, but I love that. It tastes like you took a bite out of a piece of pumpkin pie. Who doesn’t love that?! – Zeller

I’m basically The Grinch That Stole Autumn. Any and all things that dare to impede upon my hot weather fall into the category of things I don’t want in my life. This includes but is not limited to: Charlie Brown specials, dead leaves, and pumpkin in my booze. – Fonseca

I wish I loved this beer more given that it’s my only option, but unfortunately I find it pretty dilute. If you want to get into pumpkin beers but have some reservations, this is a good test run beer. It’s definitely an easy-drinking beer, but I’d rather just have an actual pumpkin pie and their apricot instead.

Malty, rich and balanced. Although there are definite caramel notes, the beer still tastes refreshing without being cloying. I often get annoyed when pumpkin beers have too much cloves since I ordered a beer not a macing. Luckily this one is comparatively light! When I tried this one it won all the points, so the only real comment I could make was a pumpkin drawing. 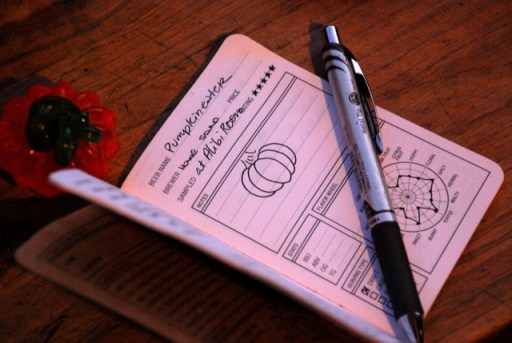 If we’ve at least piqued your pumpkin interest, what now? Considering how many pumpkin beers there are nowadays, the only thing you can do is try. You could go about it the methodical route and start a blog to chronicle your pumpkin journey for everyone else to enjoy. You could also start a beer diary and use it as an excuse to go on a pumpkin beer tasting adventure/pub crawl with someone you met off of Oh Gay Cupid. Or if you are really truly moved by all of the Festive Fucking Gourd Beer Feelings, hop on some type of transportation type  device and go to the 8th annual Great Pumpkin Beer Festival in Seattle from October 19th to 20th and get your share of their 60 offerings. Either way, let us know your beer feelings or whether there are any pumpkin beers we have to try.