This week, the Sun published a fascinating letter in their Dear Deidre advice column, in which a (presumably straight?) (presumably real???) married woman describes falling in love with another young mother at her child’s school and wonders if their tawdry extramarital affair is built to last. 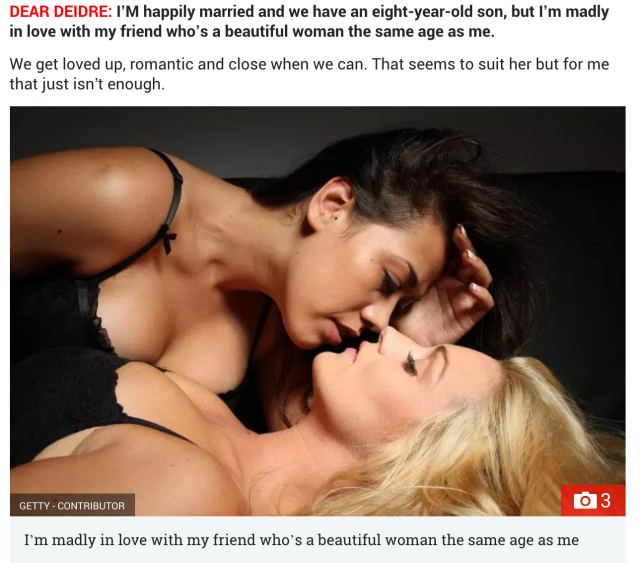 Just one section of the entire, glorious letter

Her husband, she explains, spends lots of his time away at “cycling weekends” and seems appreciative that his wife doesn’t mind his frequent absences. The letter is creatively peppered with stock photos of thin, femme-presenting predominantly white women gallivanting provocatively in black lacy lingerie and describes a “hilarious” evening that began with too much wine and ended with forbidden romance. Now the pair “get loved up, romantic and close when we can,” a sentence literally nobody has ever said. While the girlfriend seems content to keep things quiet and not disrupt either of their apparently very boring marriages, the writer dreams of leaving her husband and starting fresh.

Deidre tells this woman that her affair sounds rather one-sided, in that the writer wishes to take their relationship to the next level and the girlfriend does not. She suggests that the writer end the affair before it gets out of hand and attempt to reignite the passion between herself and her husband.

This advice, of course, is incorrect. On behalf of bisexuals everywhere, I’d like to take this opportunity to speak candidly to the writer and offer my own advice.

While this letter reads like a PG-13 letter to Penthouse in a lot of ways, I’m for now going to work under the assumption this situation is real. Listen, sister – like it or not, your girlfriend is not interested in leaving her husband for you. Deidre’s right on that count. What you are describing as love is likely heavily influenced by the thrill of keeping a secret, and I suspect if things were out in the open you might not be quite so passionate about this relationship. You haven’t indicated whether or not you’ve had experiences with women previously; if you haven’t, in my experience most people fall hard and fast for their first girlfriend and usually end up crying. You are going to become the living embodiment of a t.A.T.u. song and girl, it’s not going to be pretty. (If there’s one thing t.A.T.u. taught us, it’s that things don’t have to be “real” to be “emotionally devastating.”)

I have no idea what your husband is getting up to on his “cycling weekends” but I’m putting it in quotes because if we were speaking about it in person, I’d be using air quotes every time I mentioned it. You’ve already mentioned wanting to leave him, but perhaps you should consider whether that stems from dissatisfaction within the relationship and/or this affair specifically. Personally, I think you sound like you’d be happier starting over regardless of your relationship status with this woman, and the world could potentially be your queer oyster. Leave your cycling husband. Kiss girls. Come to A-Camp. Get weird.

Deidre also recommends checking out her e-leaflet called “Bisexual Worries.” She does not link to it, and a cursory googling leads to several other articles in which she recommends the same e-leaflet. We as a community have enough to worry about, but this fruitless search stressed me the fuck out.

In short, my advice is to leave your husband, be gay and do crimes. Your husband wants to go cycling, your girlfriend wants to have clandestine relations with other ladies from the PTA and you deserve to live your best life.