Much as everyone expected, Chris Christie moved to veto New Jersey’s attempt at a marriage equality bill, effectively ending any hope of marriage equality in New Jersey in 2012. He described his decision as a refusal to compromise “principles for politics,” which is ironic considering that opposing same-sex marriage is probably one of the more expedient things he could do for his own political career in the Republican party, and reiterated his desire to put the issue up for a vote by the people.

“I know that this is a very emotional issue and a divisive issue in my state,” Christie said in the interview to air on Piers Morgan Tonight on Tuesday but parts of which were released by CNN earlier in the day. “And so what I’ve suggested to the legislature is, in a way, the only way we have to amend our constitution in New Jersey – which is by referendum – let’s put it on the ballot, let’s let people decide. “And if the people in New Jersey, as some of the same sex marriage advocates suggest the polls indicate are in favor of it, then my position would not be the winning position, but I’m willing to take that risk because I trust the people of the state,” he said. 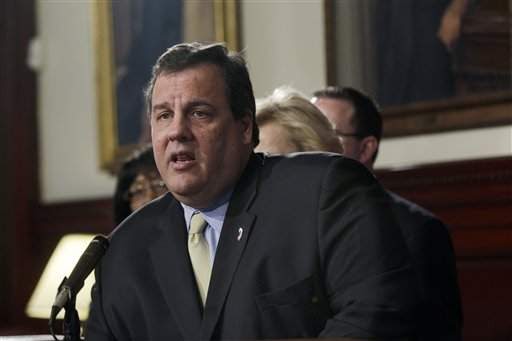 Christie also re-emphasized that he is certainly not bigoted, and everyone — including his gay friends — knows it. In the meantime, he’s told reporters that due to his Catholic faith, he will never change his opinion on this issue.

In more heartening news, Maryland’s Senate committee approved a same-sex marriage bill today, and while nothing is certain, it brings Maryland one step closer to full marriage equality. The issue will now go in front of the full State Senate, which passed a similar bill last year, and is believed to have enough votes to do so again. Last year’s marriage equality bill failed in the House, but Senator Jamie Raskin notes that “public opinion is changing quickly,” and the recent victory in Washington may mean that the landscape for marriage equality has changed enough that a passing vote is possible. There may be clauses added for the sake of ‘religious liberty protections,’ in which religious groups are not required to provide any marriage-related services unless they receive federal funding — something that’s frustrating on one level, but may help the bill to become a reality.

In Minnesota, there isn’t a marriage equality bill being introduced, but something more ominous — a vote on a possible amendment to the state constitution that would ban same-sex marriage.  The issue is deeply controversial, and it’s clear that there are at least some communities in Minnesota where equal rights for queers aren’t accessible. But at least one group has sent a strong message about their belief in equality. The Evangelical Lutheran Church in Minneapolis, to whose denomination 1 in 4 Minnesotans apparently belongs, voted overwhelmingly to oppose the constitutional amendment. Pastor Brad Froslee says “We are encouraging the civil rights of all citizens of the state and are against being signaled out or targeted by a particular constitutional amendment or legislative action.”

It’s not definite or even necessarily likely that activists will achieve full marriage equality in any of these states, let alone all three. But it seems clear that we could never have gotten even this far a year ago; in fact it’s certain, since Maryland and New Jersey have both tried and failed to pass marriage bills before. The road isn’t getting any easier to walk, but there are clear signs that at least we’re closer to the end of it, and for that we deserve to be proud.