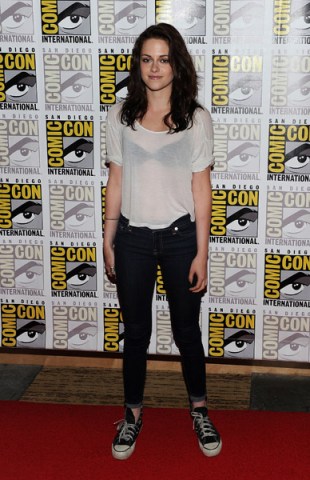 There’s been a ton of buzz around True Blood for the last week because in addition to being the best show on television, nearly the entire cast visited Comic-Con in San Diego last weekend. Before I continue talking about True Blood, which was amazing last night, last week, and the week before that, let me ask you this — do you know what Comic-Con is? If so, skip the next 2 paragraphs. If not, read on.

I didn’t know what it was until I started this here website, so if over the last week or so you’ve been hearing a bit of chatter about this or that person relevant to your interests/pants saying/doing something neat/important at an event called “Comic-Con” and don’t know what it is, I’ll tell you: Comic-Con International is a four-day conference held annually in San Diego, founded as the “San Diego Comic Book Convention” in 1970. Originally, Comic-Con showcased (yes this is a link to Wikipedia)  “comic books, science fiction/fantasy and film/television and related popular arts” but has since expanded to include “a larger range of pop culture elements, such as horror, animation, anime, manga, toys, collectible card games, video games, webcomics, and fantasy novels.” 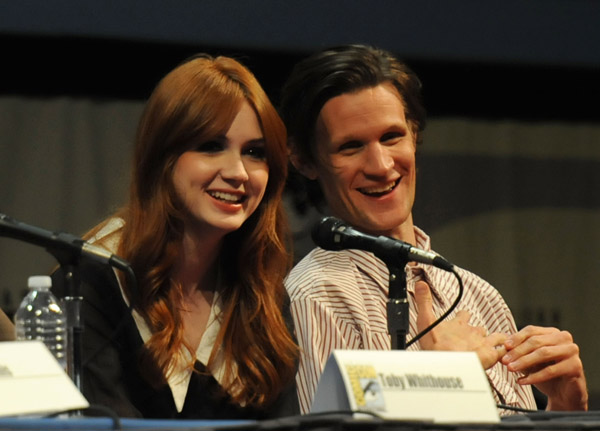 Events a fan might find at Comic-Con include panels, seminars, workshops, upcoming movie previews, “screening rooms devoted to Japanese animation,” awards ceremonies, costume contests and various screenings as well as an exhibition hall for movie studios, comic book dealers and so forth. There tends to be an undue emphasis on the cast of Twilight, regardless of whether or not a relevant Twilight film is happening any time soon. We’ve already shared with you the Glee revelations from Comic-Con, though honestly I don’t know why Glee was at Comic-Con. 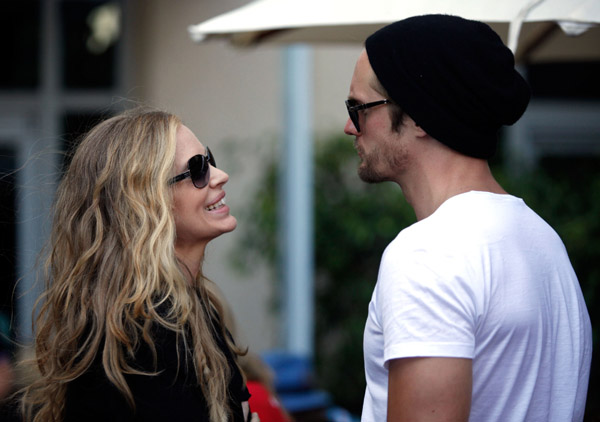 At Comic-Con, the cast were given multiple opportunities to field questions and subsequently answer these questions, often on videotape. In addition to sharing selections from some of these interviews, I will also share with you an “extended trailer” for Season Four, which contains spoilers I suppose, and the cast’s “It Gets Better” videos. I will share the extended trailer right now, and the “It Gets Better” videos (which are a tad strange) at the end of the post.

Firstly, you can watch the entire panel on YouTube, it’s in five sections.  Speaking of videos, Entertainment Weekly interviewed the cast of True Blood and Eric and Pam are super-cute. 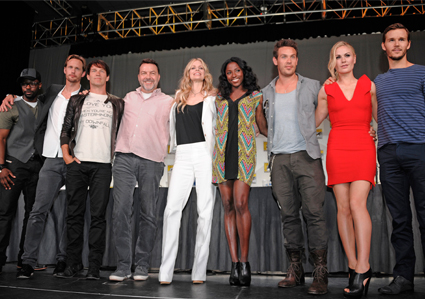 But let’s get down to the heart of the matter, and by “heart” I mean “vadge.” Let’s start out with Michael Ausiello, Master of Spoilers, discussing Tara’s sexuality with Rutina Wesley in a videotaped interview (partially transcribed for you by me right now):

Rutina: Going through a phase!? Lemme tell you what I think. This is what I think. My backstory is — this has not necessarily been talked about — I think it’s one of those things that just sort of happened. I think she maybe met her [Tara’s girlfriend], didn’t realize she was being hit on, next thing you knew, things happen and she was like “Hm. Interesting. I kinda liked that”… I think she wanted to spend more time with her and then that sorta led to a relationship. I really do think there’s a love there, and I really do think it is a relationship. I would say she’s bisexual, but I don’t think it’s a phase, because I think she really is into this woman. And I know people who like, there’s been one woman that they’ve been into and then, that’s it. But she’s definitely attracted to her but I don’t think she saw it coming, I think she kinda got sideswept.

Because I know a lot of people are like, I’ve never seen her like women, you know this is like all of a sudden and bla bla… I mean, yeah, [Tara] was sort of was taken for a ride and I think that that’s okay, and I ultimately like it because she’s happy and she’s smiling… it’s nice to see her happy and it’s nice to see her with someone who I think really likes her too for who she is.”

Michael Ausiello: How did Alan Ball explain to you that this was gonna be your storyline? Did he call you to say, “Guess what, you’re a lesbian on the show now?”

Rutina: “I had a lot of little birds tell me things very early on and I was like, fine whatever. I was totally fine with it I mean, I’m an actor. And it’s True Blood. We signed up for a show that was very racy and you have to expect stuff like that. We take off our clothes, we run around naked… we’re having orgies in the middle of the forest! I was a little like OKAY, but I also was like “Is she gonna be happy? Is she gonna be duct taped to a toilet? No? Okay, cool. Fine.”

At E! Online, some follow-up questions regarding my number-one desire for this program:

We loved one idea pitched at last weekend’s panel for the HBO hit: Hook up Pam and Tara, now that T’s ditched dudes for cage-fighting cuties and all.

In fact, we totally can’t believe we didn’t think of it first.

“Wouldn’t that be fun?” Kristin gushed when we asked if she approved of the pairing.

“I would love to work with [Rutina Wesley]. You never know what these guys are going to write. We hear all sorts of different things, and the cast, we cook up stuff we’d like to see, but it would be pretty interesting because they hate each other at the moment. So how these writers would ever manage that, I don’t know. But it’d be fun to see.”

Well if they managed to get Sookie to smooch on sexy (but sometimes über-evil) Eric Northman, we’re sure they could find a way for Pammy and Tara to hit the sack.