It’s the middle of the night. You wake up to a strange noise. You hear moaning, heavy breathing. Your roommate, certainly. Is she crying? Or… is she having sex?

If she’s crying you want to help her, but if she’s having sex, it’s really not your business. Especially because in this specific case your roommate is your sister. It’s 1937 and you’ve purchased a secluded seaside house together, which is a totally normal and not weird thing to do with your sister. You’re a man and you’re nosy so you light a candle and leave your room. Your sister joins you. The noises are not coming from her.

They’re coming from a ghost. 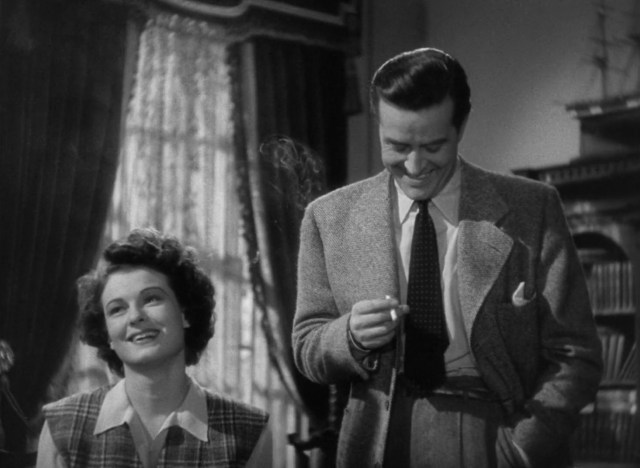 “We’re buying a house together because we’re both straight.”

Lewis Allen’s seminal horror classic, The Uninvited, was always filled with lesbian subtext. But it’s a wholly different experience watching the movie because of that subtext. Which, of course, is exactly why I watched it for the first time. After seeing it on lists of queer horror movies (including this one!), I greedily sought out the Criterion edition, only to discover not one mention of lesbianism on the back cover.

The Uninvited is about a pair of grown siblings, Pamela and Rick Fitzgerald, who decide on a whim to purchase an abandoned house in a small seaside town. Pamela is gay. She isn’t, but if you go into this movie expecting gay shit then you will immediately know that Pamela is gay. First of all, she lives with her brother, and we all know grown women living with companions instead of husbands equals gay. Second, she has that 1940s tomboy femme swagger that completely shaped my sexuality as a closeted trans lesbian/out and proud cinephile.

Also gay? Stella Meredith. Her grandfather owns the house on the hill and she’s the first to greet the Fitzgerald siblings. She has the poutiest lips and big eyes and a femme fatale air of mystery. She first tells them that the house is not for sale, before her grandfather arrives to correct her. Stella’s mother died at “the Windward House” and Stella feels an attachment to it that she doesn’t want to abandon.

Stella’s grandfather says the house is for sale but warns that some people think the house is haunted. Rick is a rational cis man who doesn’t believe in ghosts and Pamela says if there were ghosts she’d be interested not frightened. (She really does have the Nanciest Drew energy.) They officially buy the house for 1,200 pounds. 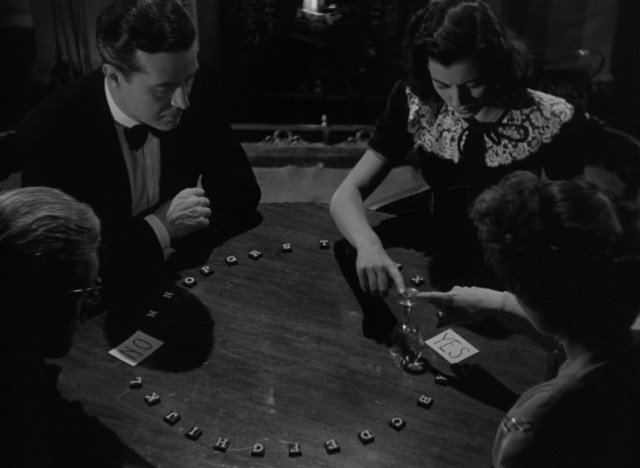 The Fitzgeralds move in and notice that the former painting studio and soon-to-be Rick’s music studio is rather cold. The one ugly room in the house, they decide. Also their dog Bobby refuses to come upstairs. As does their unnamed cat. A flower withers on its own. The whole time, Stella watches through the window wearing a fedora and blazer, looking like a sexy ghost.

The next time we see Stella she’s still wearing the fedora and blazer, but it’s open, revealing a button-down with a necktie. This is the gayest she’ll look the whole movie, giving lesbian viewers everywhere false hope. She runs into Rick and apologizes for her behavior. He scolds her for living in the past, telling her it’s time to get over her mom. He invites her to go boating and their straight romance begins.

Basically, the movie doesn’t make any logical sense as a lesbian narrative. Some films have subtext supported by plot. Add a sex scene between Carol Danvers and Maria Rambeau and the subtext could easily be text. But other films are more abstract. Film is art, after all. And art can be about feeling rather than logic.

The feeling is that Stella is caught between her attachment to her mother (lesbianism) and her attraction to Rick (heterosexuality). Stella confesses to staring longingly at her mother’s portrait. Stella wears her mother’s favorite perfume. Stella wants to visit Windward, not because it’s Rick’s sister-shared bachelor pad, but to be closer to her mother’s memory.

Upon this visit, just as things are getting romantic with Rick, the ghost of Stella’s mother returns to save her from the horror of being with a man. Stella’s body is consumed with something and she charges towards the cliff’s edge. Rick catches her and Stella describes the whole experience positively. Back at the house, Stella and her mother go for round two immediately, something I’m sure Rick could not accomplish. We don’t see what happens but it ends with Stella passed out in the music studio. 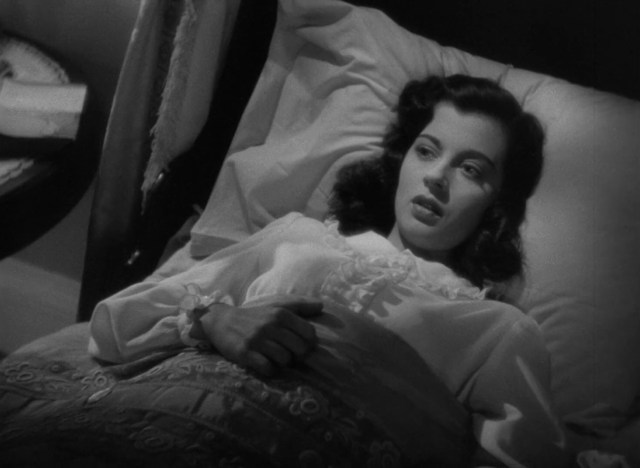 “I could really go for a cigarette.”

The town doctor is called and he fills in some plot holes for the Fitzgeralds. Stella’s father had a Spanish mistress, Carmel. Stella’s mother, Mary, tolerated the mistress, but ultimately, it seems, conflict between them at the edge of the cliff led to both of their deaths. Some called it an accident, others whispered murder. And so it’s revealed there are in fact two ghosts. Mary and Carmel, one wicked, one loving, both fighting for control of Stella. Rick shouldn’t stand a chance.

For those keeping score, this movie with no lesbians now has four lesbians. Two living, two dead. And now enters the fifth non-lesbian lesbian, the dykiest of the them all: Miss Holloway.

Miss Holloway was Mary’s best friend (and probable lover). She is austere and harsh and also has that same portrait of Mary hanging in her room. She currently runs a mental institution, but she’s very insistent in not calling it a mental institution just like the movie is very insistent in not calling her a lesbian. “Mary was a goddess, her skin was radiant and the bright bright hair,” Holloway says dreamily. I have also talked about friends who I DEFINITELY WAS NOT IN LOVE WITH this way so please respect my — and Miss Holloway’s — truth. 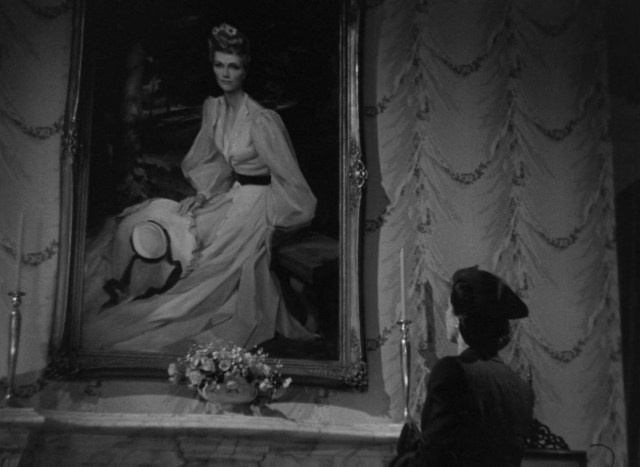 Miss Holloway tries to keep Stella in her not mental hospital for the lesbian inclined, but when the Fitzgeralds catch on, she sends Stella back to Windward hoping one of the ghosts will finish her off. If Miss Holloway can’t have her, nobody can!

Rick saves her once again, the friendly ghost flips open an old book that happens to be in the living room, and it’s revealed that Carmel was actually Stella’s mother. Stella is thrilled. “Always there’s been something fighting in me, something that couldn’t be calm and cool like Mary. I can be myself now.” This feels like a coming out of sorts. Especially since it’s followed by the ghost of Carmel’s flirtatious laughter. 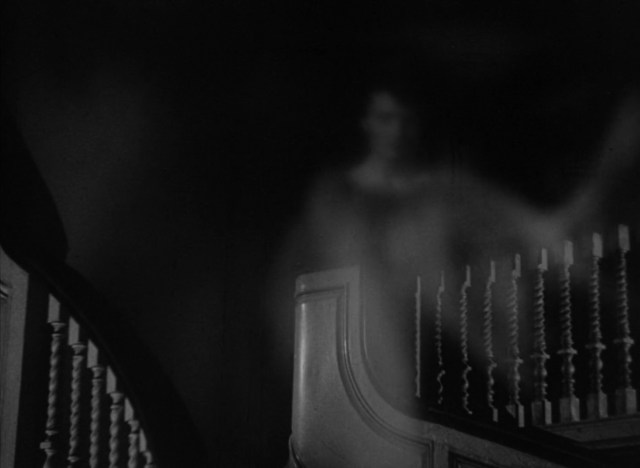 There’s still the ghost of Mary to deal with, but she quickly goes away because Rick… tells her to? This happens in the last minute of the movie and feels incredibly rushed and silly. Also silly? The doctor hints that he and Pamela are to be married too. One act of compulsory heterosexuality wasn’t enough. The movie must end like a Shakespeare comedy, queer subtext replaced with not one, but two straight weddings.

This ending should be narratively satisfying. One would think romance where both individuals are alive and no one is related would be ideal. But those last moments feel so incredibly hollow, so incredibly passionless. 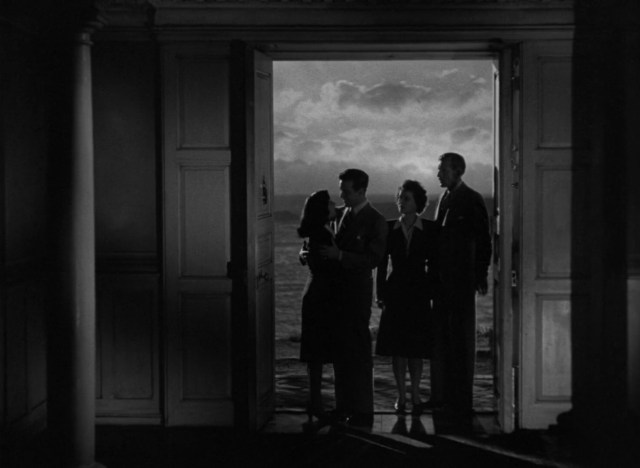 The only appropriate lighting for heterosexuality

The joy of subtext is found in the power of gay feelings. Even in 1944 when explicit queerness could not be shown on screen, the energy between these women is undeniable. No matter how literally hetero the plot may be, the movie is obviously queer. In a sense it acts as a testament to all closeted romance. No matter how puritanical a society, the gay feelings will rise. And when we watch this movie looking for gay subtext, watching through our own homonormative lens, the power of our gay feelings become part of the film.

The cries of a mourning ghost may just sound like an orgasm.

Drew has written 106 articles for us.