You may have noticed that there’s been precious little coverage of Elena Kagan‘s confirmation as the next Supreme Court Justice. It seems as though when she refused to identify herself as the leader of the radical militant lesbian underground, everyone got a little less interested. Today, though, Slate argues that we should in fact care — that three women on the Supreme Court really does mean something significantly different than two, and that regardless of their individual legal views, their gender has a significance all its own. It would be silly to argue that women will rule differently just because they’re women. As Slate put it, “there’s precious little evidence that women think fundamentally differently from men about business or law,” but rather that “if you seat enough women, the question of whether women deserve the seat finally goes away.” (@slate) 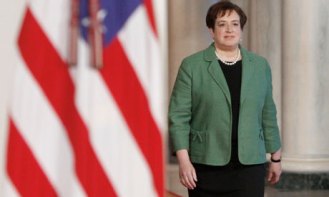 In a way, it’s a little bit circular logically; Elena Kagan‘s appointment is important because she’s a woman, and her being appointed as a woman means we’re one step closer to not caring about her gender. The argument is a little more complex than that, though. When there are enough women on the bench that their presence is normal and their participation in legal decisions is equal to the male justices, as opposed to a minority opinion, we get a little closer to correcting the bias that results from governing a hugely diverse body of people with a legal system that’s been conceived by a very homogenous population – a population mostly of white men who are virtually all straight (or at least not out). The idea is that with the inclusion of Elena Kagan, a kind of “critical mass” is reached and that we have perhaps moved past some kind of nebulous tipping point of the judicial climate. (A study done in 2006 by the Wellesley Centers for Women about women on male-dominated corporate boards apparently really has identified three as this “magic number.”)

While it’s essentialist and tiresome to argue that women “just think differently” or have intrinsically different legal opinions, they do have life experiences that their male counterparts don’t. As Slate puts it:

Ginsburg told the AP about a 2009 case involving a 13-year-old girl who was strip-searched by school officials looking for ibuprofen and the ways in which—at oral argument—some of her male colleagues compared that strip-search to the locker-room high jinks of teenage boys. A court that appeared very sympathetic toward the school district after oral argument ended up voting 8-1 that the search was unconstitutional. (Clarence Thomas disagreed.) Nobody credits the Constitution with changing in those short weeks. What changed was that Ginsburg spoke out, both from the bench as the case was being argued and then again in the media while the case was still pending, explaining to USA Today‘s Joan Biskupic that her colleagues “have never been a 13-year-old girl” and adding that with respect to that strip search, “I didn’t think that my colleagues, some of them, quite understood.”

None of us know much about Kagan’s politics or what her judicial stance will be, as has been documented in an increasingly frustrated series of posts over the last few months. Maybe, though, we can come out on top no matter what? Is it possible that Elena Kagan’s genitalia/gender identity can do for us what her past judicial record hasn’t? GIVE US SOMETHING TO WORK WITH, WOMAN.