Before Covid-19 shut down production of the show in March, One Day at a Time‘s executive producers and co-showrunners, Gloria Calderón Kellett and Mike Royce, had already crafted the idea for “The Politics Episode.” Using her own family as inspiration, Calderón Kellett wanted to explore the hesitation in talking to our family members about politics and how we can overcome it when the moment demands it. But with the likelihood that ODAAT would not be able to complete production on its miracle fourth season, Calderón Kellett decided to get the episode out another way: animation.

“Hustlers gon’ hustle, that’s just it,” Calderón Kellett acknowledged in a recent interview for the ATX Festival. Back in March, she’d already masterminded a mini-episode of ODAAT via Facetime — weeks before CBS’s All Rise would endeavor to do the same for its season finale — but then she proposed making an animated special. She added, “I will say, it’s one thing to have ideas, it’s another thing to implement the ideas. The company that we partnered with… this Canadian company called Smiley Guy [Studios], they pulled off something in eight weeks that takes 29 weeks. It’s unbelievable what they have been able to do in such a short amount of time.”

In Smiley Guy, ODAAT found “someone competent yet crazy enough to take on the animation given the compressed schedule.” According to the studio’s co-owner, Jonas Diamond, over 80 people worked to bring animated versions of the Alvarez family (and Schneider) to life. The show’s sound crew had to travel to each cast member’s house and record their voices separately. Communication between the animation studio and ODAAT‘s production team was streamlined to ensure that deadlines were met. It was a tremendous feat.

“It was sort of this act of God, it feels like all these things came together and everyone worked so hard… to get it all going,” Calderón Kellett said.

Putting aside the mechanics of it all, how did “The Politics Episode” work as an episode of ODAAT? Actually, pretty well. One of the things I’d previously been missing from the new iteration of the show was a balance of the serious storylines, like Elena’s coming out, Penelope’s PTSD or Schneider’s alcoholism or Lydia’s near death experience, with the funny. This episode fulfilled that desire beyond my wildest expectations. 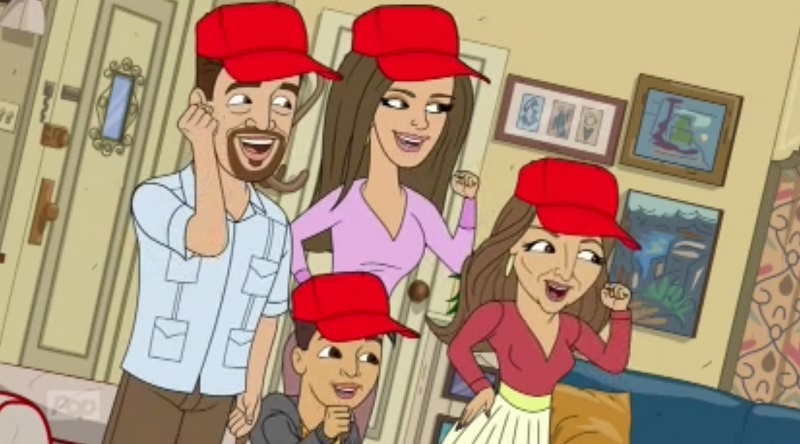 Penelope’s cousin and childhood best friend, Estrellita (voiced by Brooklyn 99′s Melissa Fumero) returns to ODAAT, this time with her mother (Mirtha, voiced by Gloria Estefan), her husband (voiced by Lin-Manuel Miranda) and son in tow. It’s the first we’ve seen of Penelope’s extended family since ODAAT’s Season Three opener. Only this time, instead of bringing Penelope’s lesbian cousin, Pilar, they promise to bring a healthy dose of their Trump-loving, conservative politics. 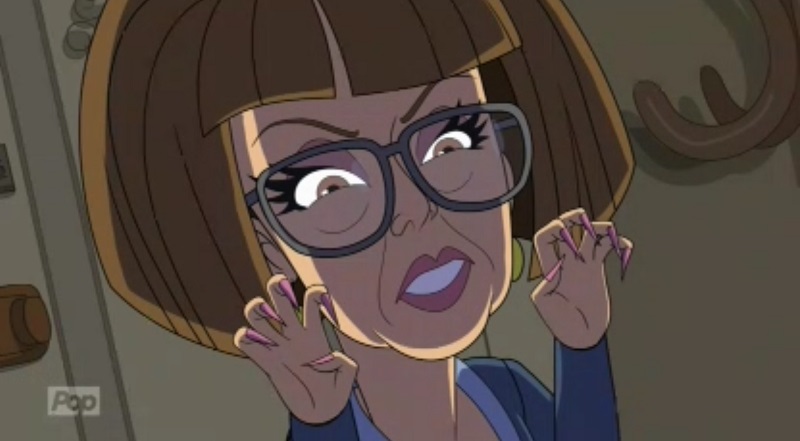 The battle between abuela and her sister is back on after Mirtha threw some shade at Lydia about her (allegedly) dry croquetas. 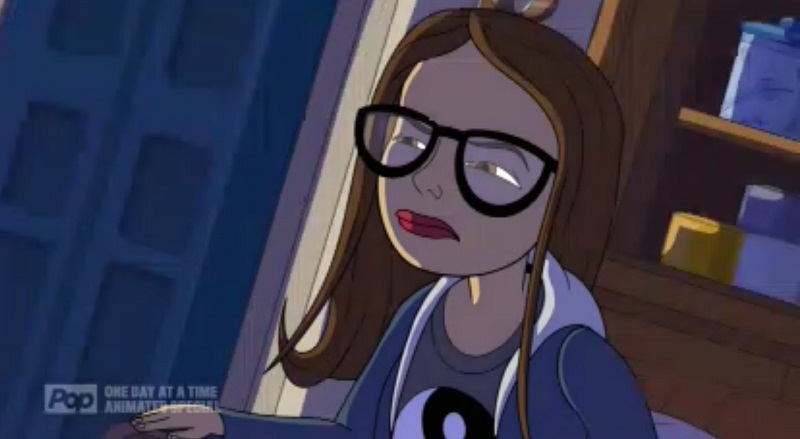 A Method to Her Madness

Fearing the fiery political debate that might result, Penelope wants to send her cousin and her family to a hotel. Abuela’s determined to host family because that’s just what you do, while Alex wants the opportunity to capitalize on a visit from “Tío ATM.” Looking to Elena for some support, Penelope finds none. She’s surprised, given how diametrically opposed Elena’s politics are from her aunt and uncle.

But, it turns out, Elena’s got a more sinister plan: “They’re voters in Florida — a swing state — so we cannot let them leave until December.” 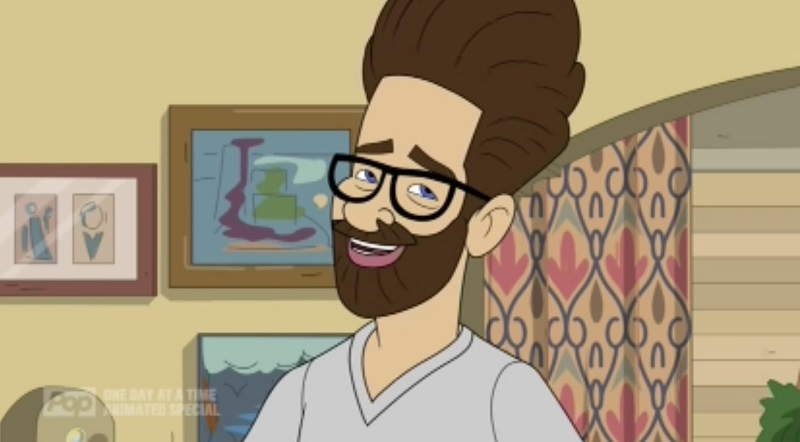 As is his wont, Schneider volunteers to fix everything by teaching the Alvarezes how to bury all their feelings and emotions like he does with his father.

Penelope: Yeah, keeping it inside doesn’t work for Cubans, we have to say everything and then keep saying it louder until asked to leave the restaurant.
Schneider: No, you just gotta push it down deeper so you die of an ulcer instead of an explosion. 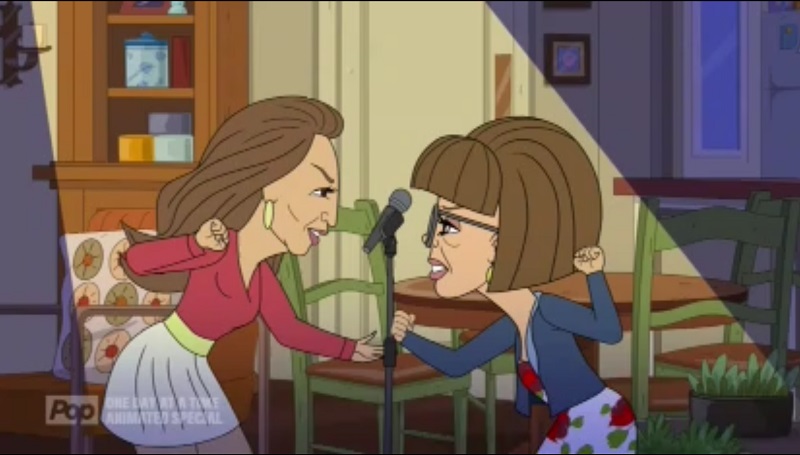 When her initial suggestion to just be polite to family — which, hilariously, requires British accents — doesn’t garner any support, Lydia suggests an old school method to settle their disputes: a talent show. In the end, everyone wins, though because we get not one but two Glorias! 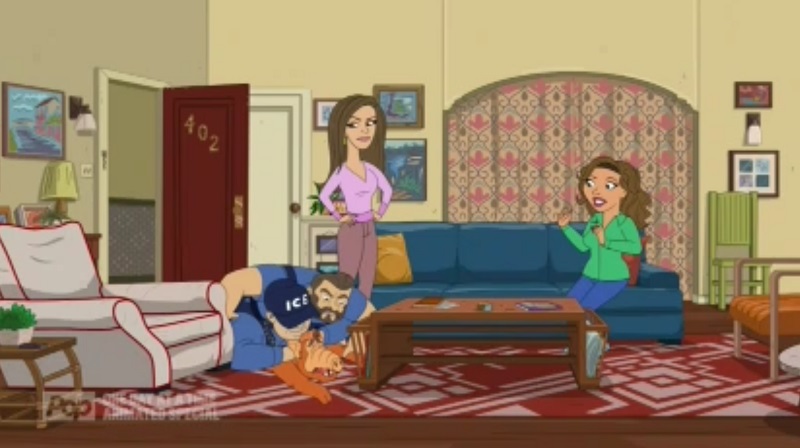 Alex recommends a conflict resolution method that he learned in school — Ask, Listen and Find — but Penelope imagines that provoking a debate with her cousin over illegal immigration. 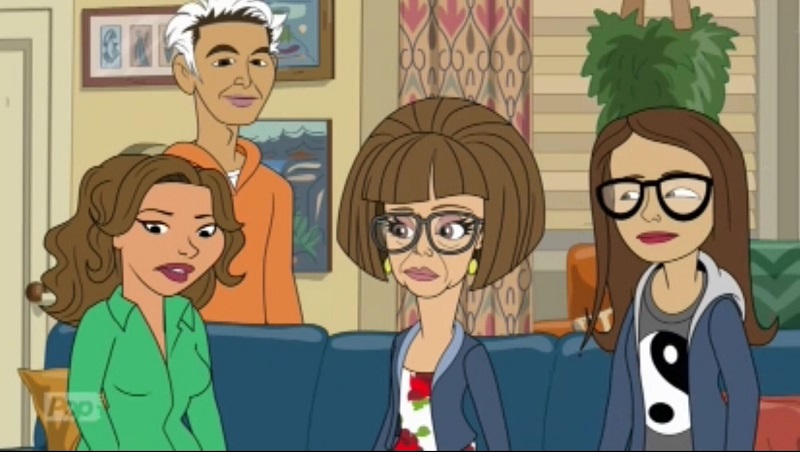 Unsurprisingly, it’s Elena that’s able to bring some sense to the discussion about how to engage those who disagree with you. She channels her aunt’s voice and delivers the perspective of many Cubans who continue to support Republican politicians by large margins. Alex challenges his mother to preview how she’ll respond and Penelope rises to the occasion.

It’ll leave you in tears, guaranteed. 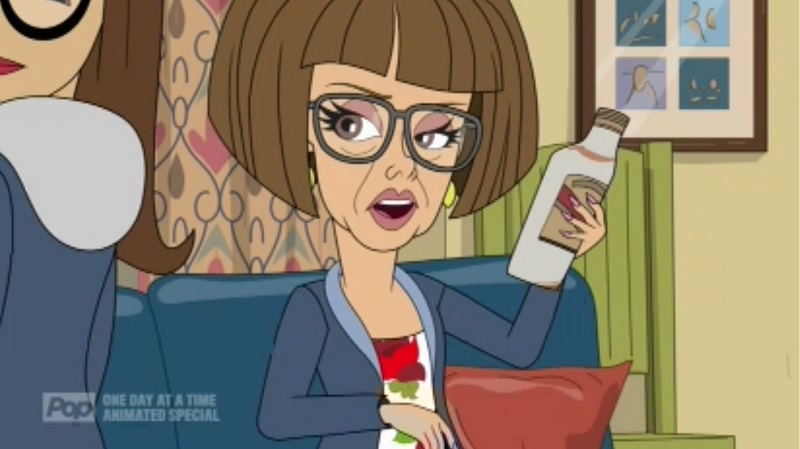 And If All That Fails

Have a little rum.

Did you watch One Day at a Time‘s animated episode? What’d you think? What were your favorite moments?