The best thing I can say about the best TV of the last two years is that, on a good day, it distracted me — for ten minutes, an hour — from every way the world was burning. My wish was that Jodie Whittaker’s Doctor Who would be one of the rare shows that would offer me that occasional respite. It did, for a moment. Near the middle of the third episode of this new season, though, right around the time I realized the Doctor and her companions weren’t going to take over Rosa Parks’ story, but guard the timeline so she could simply carry on as the hero she always was, I started to cry. Sniffly tears. Bigger ones.

The feeling I had was familiar, but I didn’t really recognize it; chest pain, not because my lungs were restricted, but because I was breathing big and deep and full of — what was that? Hope? Yes, hope! What I was feeling was hopeful! I wasn’t ignoring the world and its cruelty and its history. I was sitting with it, in it, the worst of it, and the now of it, and seeing, for the first time in a long time that I could find a way through. 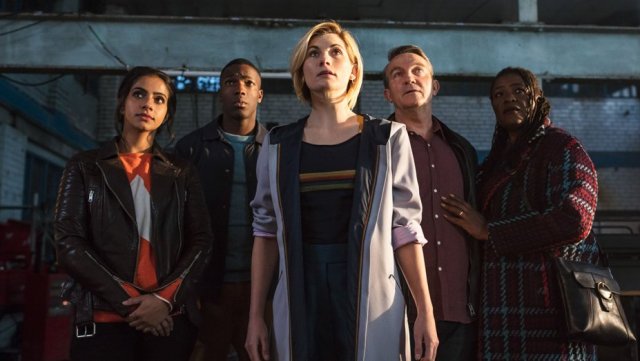 Yaz and Ryan and Thirteen and Graham and Grace

Chris Chibnall has rooted Thirteen in Doctor Who‘s mountain of lore, and Jodie Whittaker brings just the right balance of gravitas and whimsy to make it feel like just another regeneration — but neither of them have wasted any time in their quest to reframe how the Doctor sees herself and how she interacts with the world. Yes, there is time travel. And yes, there are monsters. But new Who isn’t about how the Doctor overcomes her adversaries; it’s about what facing those adversaries reveals about her and the people fighting alongside her. It’s about the ways humanity triumphs.

And not just white male humanity — oh ho, no! There’s a white guy named Graham in the TARDIS and he’s surprisingly likable, but the series has mostly explored his character through his relationship with his Black step-grandson, Ryan, who also is in the TARDIS, alongside his childhood friend Yaz, a Pakistani Muslim police officer. We’re getting to know them more and more as the season progresses, and the people we’re meeting along the way aren’t white guys either. The guest star hero of the second episode, “The Ghost Monument,” is a queer woman named Angstrom. The guest star hero of episode three, “Rosa,” is, of course, Rosa Parks. In episode four, “Arachnids in the U.K.,” it’s a team of women of color taking down Chris Noth playing a version of Donald Trump. And in this week’s “The Tsuranga Conundrum,” it’s a renowned woman general/fighter pilot played by the Welsh actress Suzanne Packer, a second generation Jamaican immigrant. 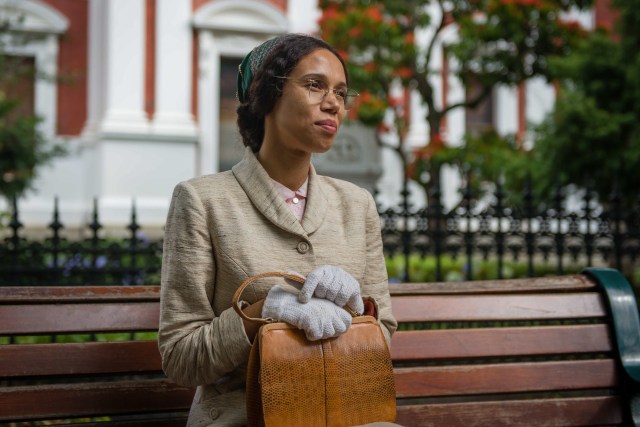 “Rosa” is the first episode of Doctor Who co-written by a Black woman, and it shows. Malorie Blackman was the UK Children’s Laureate from 2013 to 2015. She’s written over 30 novels, dozens of short stories and books for new readers, stage plays, and a series of radio scripts for a show called Noughts and Crosses that “uses the setting of a fictional dystopia to explore racism.” No wonder “Rosa” doesn’t treat racism as a thing of the past or frame it as something perpetrated by old white Southerners. Ryan talks about being policed more than his white friends, Yaz talks about being called slurs when she’s leaving her mosque. Ryan feels dejected that even after everything the United States’ Civil Rights movement accomplished in the ’60s, moving through the world is still harder and more dangerous for them. Yaz finds light in the fact that 52 years after the day they’re sitting in this alley in Birmingham, Alabama, the United States will elect its first Black president; and no, it won’t “solve” racism, but where will they be 53 years after that?

It’s mesmerizing to see a show written, run, and mostly acted by white men for decades suddenly populated by so many people of color. And it’s just as hypnotizing to see how casually it treats queerness. In addition to the aforementioned queer Hunger Games-esque survivor Angstrom, “Arachnids in the U.K.” had a queer political strategist (who, like basically everyone else in that episode, got eaten by spiders), and it introduced the idea that Yaz is bisexual. It starts with a conversation between Yaz’s mother and the Doctor.

Yaz’s mom: Are you two seeing each other?
The Doctor: I don’t think so. Are we?
Yaz: We’re friends!
The Doctor: *Well, there you go face*
Yaz’s mom: *rolls her eyes.

It’s the same conversation Yaz’s mom has later with her and Ryan, seeming to indicate that Yaz has previously expressed romantic interest in more than one gender and no one’s got a problem with it, including the Doctor. Earlier in the episode, Yaz and Thirteen have a conversation strikingly similar to the one Rose and Ten (more than friends) have about him traveling the alone, and at the end of the episode Yaz breathlessly proclaims to the Doctor as she rushes to the TARDIS, “I want more. More of the universe. More time with you. You’re like the best person I’ve ever met.” (Gay.) 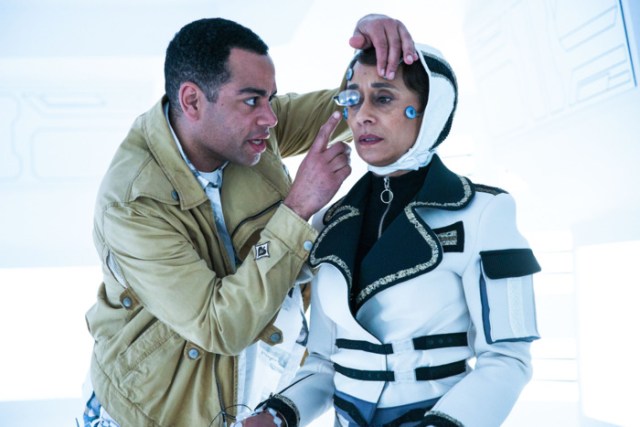 It’s this deliberate commitment to exploring the universe and space and time and the humanity of more than just white men that makes Doctor Who‘s optimism resonate. It’s inhabiting the fictional universe it’s aiming to create in the real world. It’s a self-fulfilling prophesy. And after this week’s episode, I have no doubt it’s on purpose, that I’m meant to be crying and my chest is meant to be aching with promise. When asked if she’s a doctor of medicine, our Doctor responds, “Well, medicine, science, engineering, candy floss, Lego, philosophy, music, problems, people, hope! Mostly hope.”

If that weren’t enough, consider the words of the android Ronan, offering tribute to his General, and a message to the Doctor and her crew, and to me and you: “May the saints of all the stars and constellations bring you hope, as they guide you out of the dark and into the light. On this voyage and the next. And all the journeys still to come. For now and evermore.”