I am honestly having a hard time explaining the joy I feel in being able to return to these hallowed internet pages to report that yes, in fact MORE homosexual business has occurred on The Morning Show, the great and terrible love of my life!

We pick up this episode where last week’s left off — Alex and Bradley hosting their first show together since The Events of last season. It’s a big production, The Foo Fighters are here, everyone is very congratulatory and happy to have their money maker (Alex) back. Bradley seems…s lightly distracted while on air, and maybe I’m projecting, but her face simply screams “woman reliving hours of orgasms.” 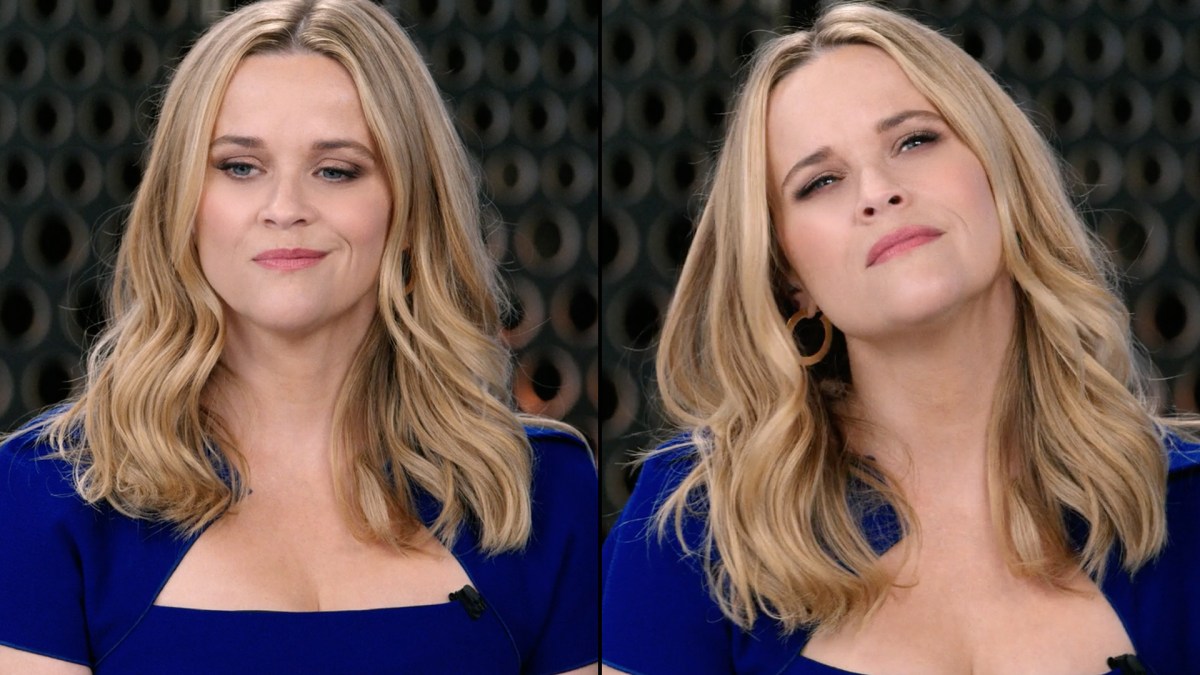 Exhibits A and B of Lesbian Sex Daze

After they wrap, everyone is fawning all over themselves to congratulate Alex, which I get, because no one wears all black like Jennifer Aniston. Bradley is clearly slightly miffed by this, which like, babe, cool it, you were just here on Friday! Alex hasn’t been here in eight months! You gotta give ‘em a chance to miss you, you know?

But Bradley has bigger things to worry about right now. The first is that she is dying to moderate the presidential debate in Las Vegas. This plot point provides Reese Witherspoon the opportunity to deliver the line “people still stop me on the street to ask about my de Blasio interview” which is so hilarious it almost made me do a spit take. The more important thing is that Bradley has a secret meeting that she booked herself, but she’ll be back in a couple of hours!! (Solidarity to anyone who has ever managed a busy person’s calendar and knows the pain of said person putting things in there without supervision.) She casually pops a few Altoids as she says this —  gosh I wonder where she could be off to! 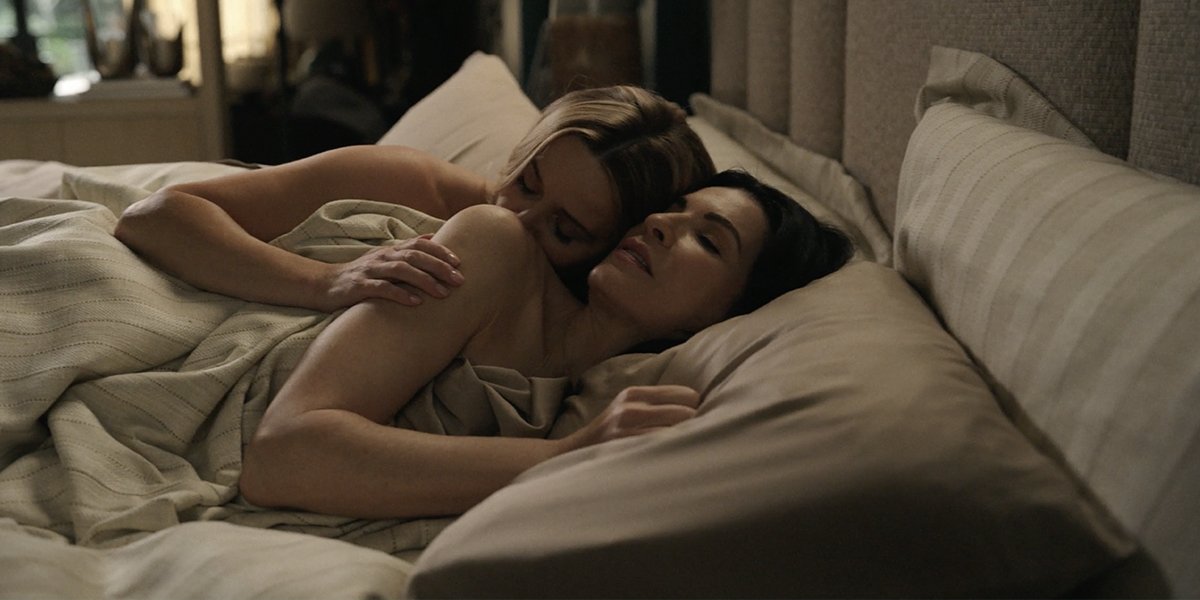 That is a lot of neutrals in one bed.

Where else, if not relaxing with a post-coital glow in Laura Peterson’s bedroom? Laura compliments her on “knowing her way around for someone in the closet,” leading Bradley to immediately reply “I am not in the closet, I am just not actually a lesbian.” Which is a baffling way to conceptualize the concept of “in the closet,” like, it’s not just a closet for lesbians? But alas, Bradley must be off, she simply must moderate the debate and she will go yell at her friend slash network CEO Cory until gives her the gig.

Laura in all of her raven haired glory says that she has worked with Cory for a long time and that he’s never taken particularly kindly to people… acting like that around him? She is clearly trying to hint that Cory has feelings for Bradley, not in a possessive or “lesbian scared of bisexuals” way, but in a “do you seriously not see what is going on here?” way. But no, Bradley insists, they are just best friends! Or they USED to be until he didn’t give her a job she wanted and brought Alex back to TMS without her permission. Laura is like mmmmmmmmmmmmkayyyy sure? Then she gently suggests that Bradley might have better luck if she stops screaming at her boss whenever she is upset and instead makes him an ally. “Your career will thank you for it,” she cautions, and Bradley’s face as she leaves is equal parts annoyed and equal parts turned on, which I respect and understand.

Bradley takes Laura’s advice and has an honest conversation with Cory about how she doesn’t know what to do when her feelings are hurt, she only knows how to respond with anger. We learned last season that Bradley’s family is made up of an emotionally abusive mom who divorced her alcoholic dad when she was a kid and that she has a brother who has been in and out of rehab for drug addiction for a while. It does make sense that she has no real ability to communicate how she is feeling, but she is also in her forties and I am allowed to find her lack of growth frustrating. ANYWAY, Bradley leaves to report her success back to Laura, and we are treated to a shot of Cory alone, confirming, much to my irritation, the whole “he is in love with Bradley” thing.

The first words out of Laura’s mouth upon seeing Bradley in her doorway are “did you call?” which literally made me laugh out loud because I respect nothing more than a woman who is protective of her alone time. Bradley was too excited to tell Laura that she took her advice and patched things up with Cory and, no, they didn’t really talk about the debate but it was still good. She goes on, but at this point I was too gobsmacked by Laura’s palatial brownstone and also the excellent costume design. Sure, anyone can wear a pair of joggers and a silk shirt around the house, but those house sandals? Talk about putting the L in LGBTQ! Also I’m, sorry, a damn COURTYARD? 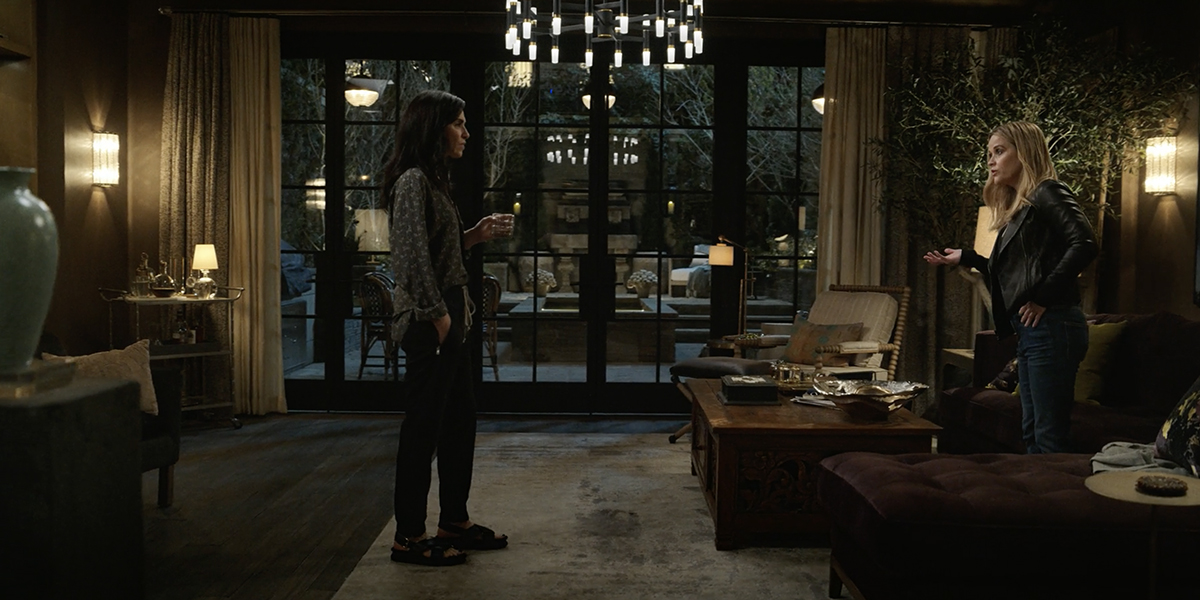 Please look at that space, there is an huge outdoor fireplace!!!!

Bradley is still talking about why she is not going to get the moderator gig. The network wants Alex to do it and putting two straight white women up there isn’t going to look good, especially with Bloomberg there, because “you are really gonna need diversity up there to ask him about stop and frisk.” As a Person of Diverse Experience, I have to say thank you to The Morning Show for that sentence. Laura is miffed that Bradley described herself as straight, and when she presses Bradley is like, “isn’t sexually fluid a thing? I had a threesome with two guys once! To most of the world I am straight! This isn’t funny! Why are you laughing!”

Laura agrees, it’s actually not funny at all! Also what a good time to learn her backstory! She was closeted in the 90s, and when she was outed, she got fired from anchoring a morning show like, immediately. So yes, Laura has some baggage about this, and she finds it “a little annoying” that Bradley isn’t taking advantage of the way things have changed. “And I’m envious, that’s it.” A fight begins in earnest when Laura calls Bradley out for using her Southern™ identity when it suits her, says that she doesn’t think Bradley is interested in having a gay identity because she grew up in a southern conservative environment that didn’t accept it. Then she says Bradley is repressed. “I’m not fuckin’ repressed!!” Bradley yells before picking up a vase and slamming it to the ground. 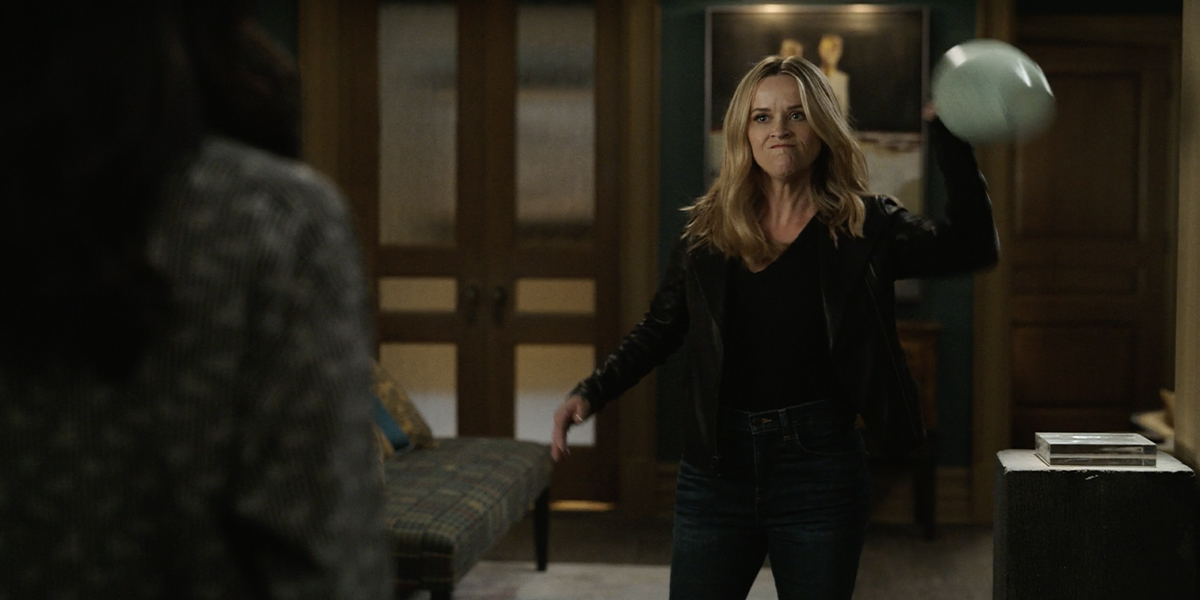 It should be noted that that vase is roughly the size of Reese’s head.

I am going to have to transcribe the exchange that follows because it is… gorgeous to me.

Laura: You’re gonna have to pay for that.
Bradley: Well you better start a tab, cause I’m gonna be breaking a lot of shit around here. I’m not repressed.
Laura: I guess you’ll have to find some other woman’s vases to break, then.
Bradley: Fine, I’ll start now.

Whew, so much to parse here! First of all, breaking a woman’s vases is QUITE extra, as is insinuating that you will be doing it a lot. But I get where Bradley is coming from! Coming out is hard enough when you are a regular human in the world, and doing so when you are a public figure who gets stopped on the streets about your interview with de Blasio is even harder.And we have just learned that she does not know how to handle hurt feelings in any other way, so her getting immediately defensive does really track. It is not clear to me if Bradley has ever been with a woman before, so I don’t know if she is working through coming out to herself and the thought of coming out to the public, or just coming out to the public. Those are very different things! Either way, this relationship is like, twenty four hours old, so Laura absolutely should have tapped the brakes on the coming out thing.

On the other hand! I understand the frustration that Laura is feeling! I honestly love that she has the ability to recognize that her feelings are not about Bradley per se, but rather about her jealousy, about the kind of career she should have had. Of course she feels a little resentful, the simple fact that she is a lesbian torpedoed her career, and while it probably wouldn’t be a walk in the park for Bradley, the response would look much different now. Also she does get the line “I guess you’ll have to find some other woman’s vases to break” which I am seriously considering tattooing upon myself.

The episode ends with Bradley attempting to argue that she should moderate the debate because she has an important voice to add, and that is the voice of a…..woman from a southern conservative family. You can see her realize, as she’s talking that Laura might have had a point RE: repression. So she returns to the brownstone with a $300 Crate and Barrel gift card and an apology. Nice try, but that vase was obviously a gift from a friend’s wife who lives upstate and certainly cost more than $300. She apologizes for being a pain in the ass, and when Laura turns to head back inside, Bradley grabs her in a very desperate hug. The look on Laura’s face quickly goes from “shock and surprise” to “whew, this baby gay is a mess.” 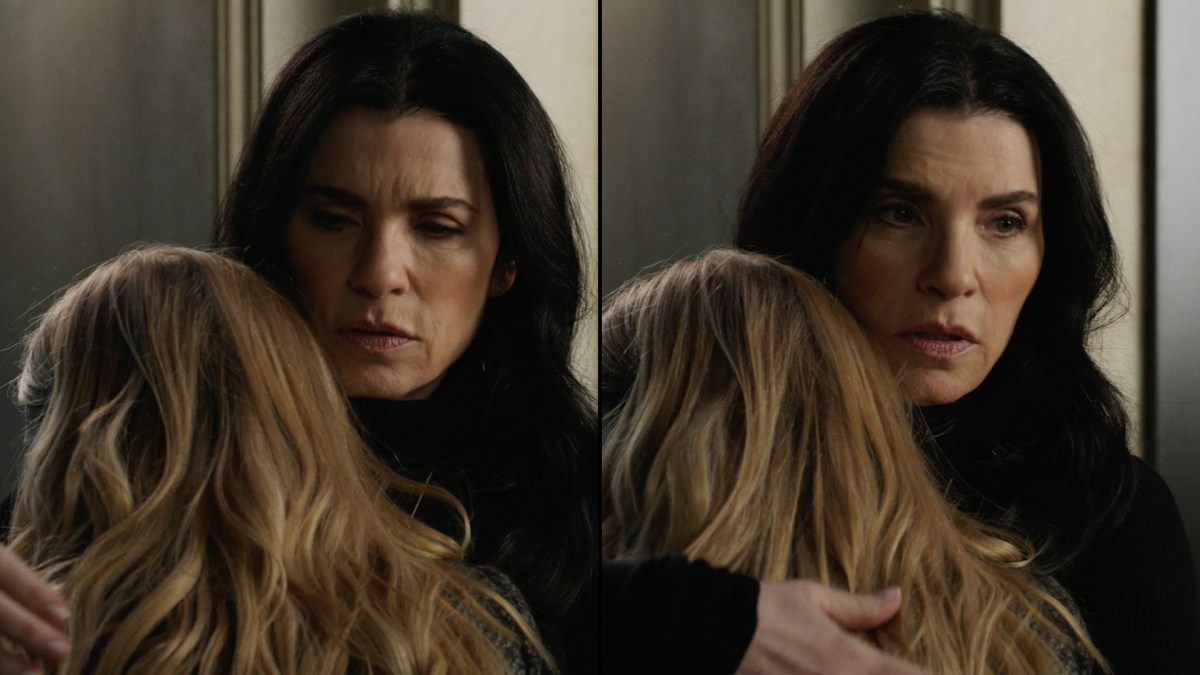 “God I am a sucker for fucked up blondes.”

Also, Holland Taylor shows up at the end of this episode to tell Billy Crudup “It’s time to face the fact that actions have consequences, and I keep my temple clean.” Great work! 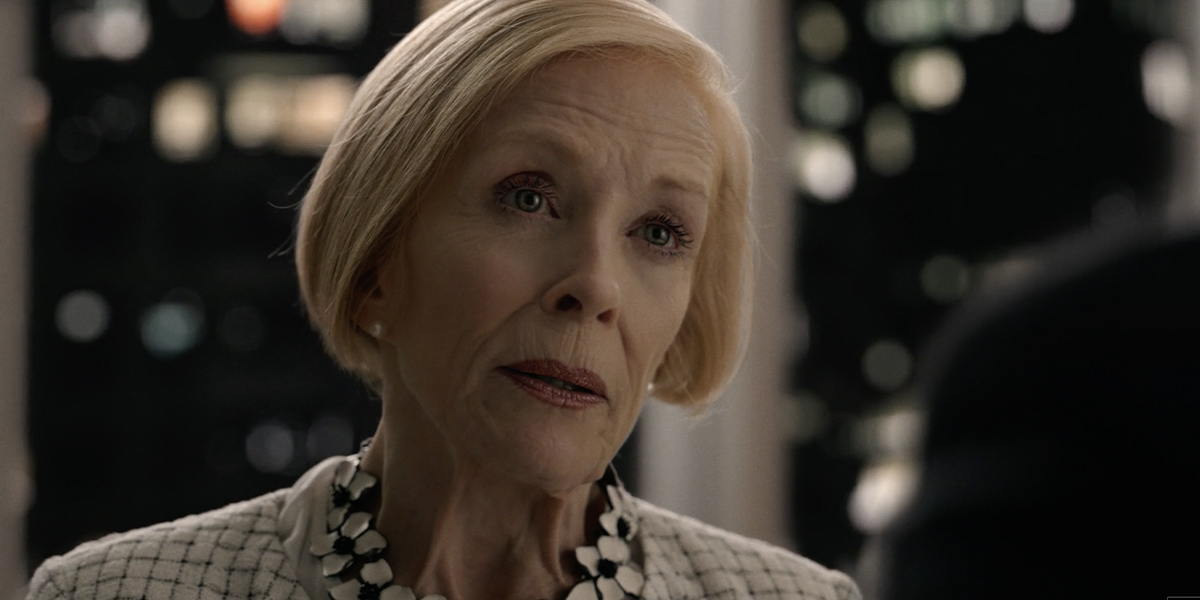 As ever, I will be here to update you and guide you through any and all gay moments that happen this season! And if you like, you can read my old school, Television Without Pity style recaps via my (free) newsletter, Chaos, It’s The New Cocaine! where I am bravely recapping every episode in painstaking detail, yes, even the straight stuff.

Christina has written 154 articles for us.