While I was watching the back half of Light as a Feather‘s second season, I was all ready to write a whole piece about how they managed to walk the often-missed line between a having queer villain and villainizing queerness. But then they decided to cross the line. So instead I’m here to tell you how this mediocre-but-fun spooky show let me down.

First let me remind you what this show is about. It’s basically Pretty Little Liars if A was actually a supernatural unseen force instead of a series of truly pathological and very busy humans. A bunch of teenagers play the most fucked up version of Light as a Feather I’ve ever seen where instead of just lifting their friends up using nine hundred sets of two fingers and calling it magic, the leader of the game also makes gory predictions for how everyone will die. And those predictions start coming true. There’s a bit of a Final Destination aspect, where death is coming for you no matter what, but instead of having to die in a certain order, you have to die in a certain way.

Amongst the teens who played this doomed game is Alex, a little lesbian cutie pie who met a pretty girl named Perry at a party. The first half of the season let their relationship shine and even though Perry started to get wrapped up in the chaos of the game, she was a supportive girlfriend to Alex. No matter how wild things got, Alex had Perry as her rock. 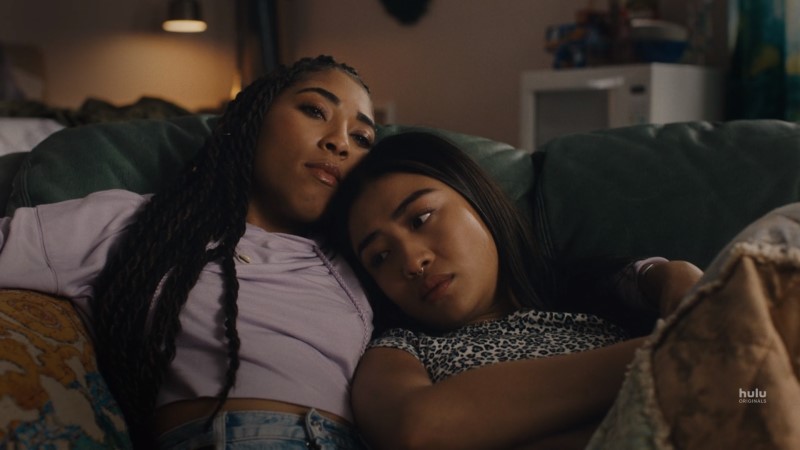 :deep breath: :Adele wail: WE COULD HAVE HAD IT AAAAAALL

But then the rock gets thrown at her head when Violet realizes that Perry was the sister of the boy she killed the last time she played the game. Of course, by the time her friends put these pieces together, Alex is halfway to the middle of nowhere with Perry under the guise of some quiet time away together. When Alex figures it out for herself, she freaks, understandably. Perry has been lying to her this whole time. But Perry insists that her feelings for Alex were never part of the plan, they were always real. And they can still be together after Perry kills Violet! What’s a little murder between girlfriends.

At this point, I thought they got it right. Perry had a clear motivation: Violet killed her brother, Perry wanted to kill Violet. Extreme, sure, but there’s some kind of demon bug growing out of someone’s spine a few towns over, so we’re past that now. But Alex has nothing to do with it. Perry’s queerness and her feelings for Alex are real and separate of this entire situation.

But then as the episodes go on, Perry turns into a cartoon villain who just wants to destroy everything and doesn’t care who dies, including Alex. Alex ends up crushing her with a strange metal death trap hanging from a barn ceiling whose original purpose I truly cannot fathom. Perry’s body is gruesomely crushed, horrifically twisted, and Alex runs off with Violet to find her other friends and try to break the curse. 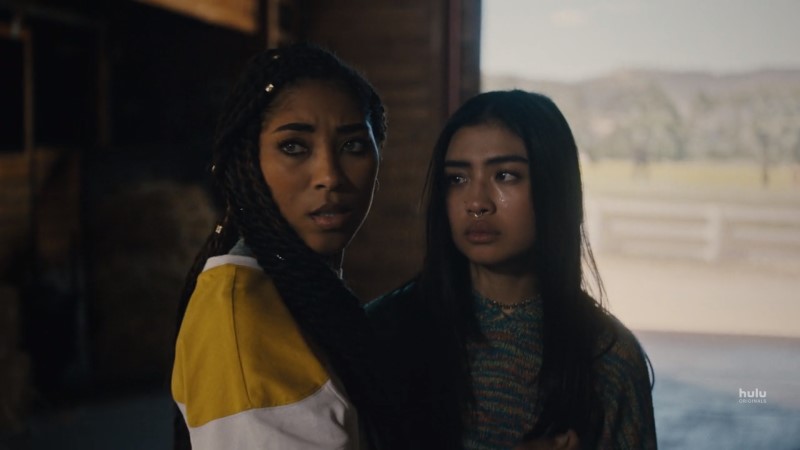 “Well that took a turn.”

In this last leg of the show, the teens exhibit some truly terrible decision making despite this not being their first danger rodeo (Why would you leave the smallest one of you alone to do the digging? Why would you not just DUMP THE ASHES INTO THE VERY SMALL HOLE YOU ALREADY DUG instead of trying to dig a bigger hole for the whole urn?!), and I’m still not sure I understand the mythology of the curse, or why some people died but others didn’t, if Violet’s Nana was real, where all the demon bugs went, or if Alex and her friends are all still in danger. But maybe I’m trying to apply too much real-world logic onto an adrenalized hyperreality I’m not meant to understand. At the end of the finale, before the ‘where are they now’ time jump, Alex realizes that Perry left her a voicemail before all the barn shenanigans. And as she’s listening to Perry saying she’ll always be with her, we pan over Perry’s crumpled, bloody body. And as Perry’s voicemail says she’ll always be watching, Perry’s eyes snap open.

And thus, more questions. Was this just a “clever” attempt to avoid the bury your gays trope? Did Perry play the game too and being crushed to death by a medieval contraption wasn’t her way to go? Was that shot just for the ~drama~ of it and wasn’t meant to be taken literally? And you know what, while we’re asking questions, why did they have Alex’s sister’s friend flirt with Alex if they weren’t even going to show them dating in the flash forward to graduation? She called her cute! But it was before we knew Perry was evil so I didn’t know I could root for it! Felt like a miss. But don’t worry the straight couple got together in the end.

I get that horror isn’t the genre where people get happy endings, and if everyone died or was doomed or traumatized I’d understand. But if ANYONE gets a happy ending, can’t the lesbian ALSO get a happy ending? Or even a hopeful ending?? Best case scenario, the girlfriend Alex thinks she killed isn’t dead and is just stalking her? Worst case scenario, the game isn’t over because Mack’s dead twin possessed Violet and Alex will still choke to death someday?

I guess I’m saltier about all this than I realized when I started writing. I’m just so tired.

I mostly watched this show for Haley Ramm, if I’m being honest, because I loved her as bisexual snark queen Brenna on Chasing Life, and she continued to bring the humor on this show. Overall it was a quick watch, and I was having fun for the most part until I realized the dark, tropey road they were going down. I just don’t think we’re in a place yet, culturally, where there’s enough positive representation out there to start killing off evil lesbians. And I do think there’s room for queer baddies, if done right. I think we’ll get to a point someday where everyone is fair game, but we’re not there yet. So while a few episodes ago I would have given you an unenthusiastic, “Yeah, give it a shot! See if it’s your jam,” now my official recommendation is: if you really want to watch some teenagers with poor decision-making skills play Light as a Feather, watch The Craft instead.