I won’t lie to you, there was one whole episode of The Legend of Vox Machina, a blissful 25 minutes, that I thought maybe, just maybe, they were going to pair Keyleth with the other twin this time around. Just a flash of hope, that was quickly squashed by the third episode in this triad, but I’ll be clinging tight to the good ship Vexleth all the way til the end.

Episode 107, “Scanbo,” begins in a Whitestone flashback, where we see a glimpse of Percy and Cassandra in the befortimes, Percy a teacher’s pet trying to please Professor Anders, Cassandra making mischief to distract him. They learn about residuum, and thus so does the audience, if they didn’t already know; it’s a refined version of whitestone that enhances magic. We also glimpse a bit of tension between Anders and the de Rolos, as he wants to increase production in the mines but they are not interested in the money grab.

In the present day, there’s tension between Vax and Percy since Percy pointed his gun at him. Vex calls her brother off and more gently asks about the change they see in him when he points his gun. He tells them about how Pepperbox came to be, how his vengeance consumed him and drove him to invent the tool with which he could achieve it, and how there’s a name on every barrel. Lord and Lady Briarwood, Professor Anders, Ripley, and the only name that is gone now, Stonefell. They ask who the sixth barrel is for, but before he can answer there’s a small…distraction.

You see, Keyleth was trying to heal the Sun Tree with her new spell and ended up causing a very small fire. Vex corners Keyleth to scold her for being reckless but unfortunately Vax stops his sister before she can fully pin the druid to the wall.

The team heads off to find Cassandra, Scanlan planning an epic distraction at Duke Vedmire’s mansion that includes him chugging potions he doesn’t know the contents of, including one that turns him into a triceratops. Some cute moments in this hullabaloo include him finding a room full of guards playing D&D, being stopped by yet another door (the true enemy of Vox Machina), and getting to hear Sam Riegel sing more. He eventually escapes by way of Scanlan’s Hand, pretty much everyone besides Vedmire himself.

When the rest of Vox Machina sees the smoke from the fire Scanlan made, they head off to save Cassandra. When they enter a room full of guards, practically without needing to talk about it, Keyleth and Vex work in tandem, Keyleth using a root to lift Vex to the perfect height for guard murder.

While his friends are fighting the guards, Percy finds his sister, just in time to see Professor Anders slit Cassandra’s throat.

Episode 108, “A Silver Tongue,” doesn’t give us the satisfaction of picking up where we left off. Instead, we check in on Pike, who is still trying to find her way back to the Everlight. But while she meditates, all she sees are thick, black vines tying her up and pulling her down. The holy people helping her beg her to take a break, but Pike doesn’t want to give up. She wants to keep pushing.

When we finally get back to Whitestone, Percy is staring in shock at the lifeless body of his sister, but luckily Keyleth arrives and rushes to Cassandra’s side. Vax helps her get some components together, and Keyleth does a spell she hopes will revive the younger de Rolo while Percy chases the fleeing Professor Anders.

Vex and Grog are still fighting guards, and one in particular starts to hit on Vex, and she responds by promptly splitting an arrow and killing him dead. Pleased with their success, the two of them go join the rest of their party, who are now being attacked by some suits of armor Anders has animated.

Keyleth is quietly begging her magic to work when Cassandra springs to life and screams at the antlered stranger beside her, and Keyleth screams back before awkwardly introducing herself. She runs off to tell Percy and Cassandra passes out from the stress of being brought back to life.

Professor Anders noticed the fight turning in Vox Machina’s favor, so he uses his magic silver tongue (the titular role!) to turn Grog against his friends. Keyleth gets knocked into Vex’s arms. 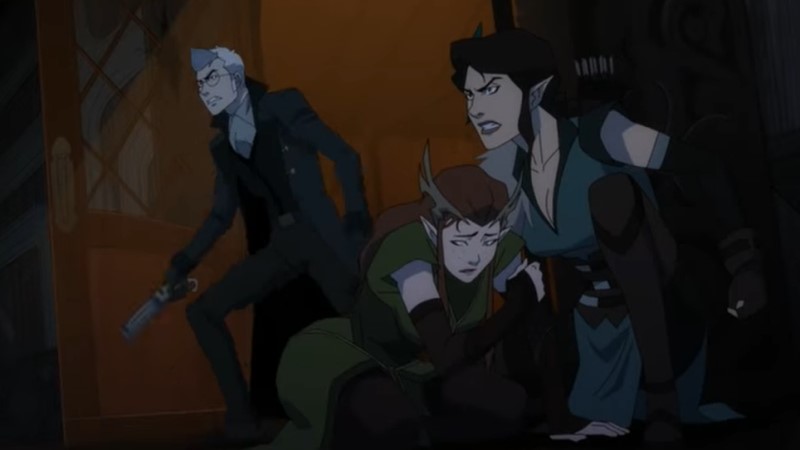 I was raised in a queer media wasteland, back when slash ships were all we had, and we lived for moments like this. Old habits die hard!!

Then Vex says, “You go high, I’ll go low,” and they tag team Grog until they get knocked back into a pile of limbs. (You see now why I thought for a brief delusional moment that my ship was going to sail?) 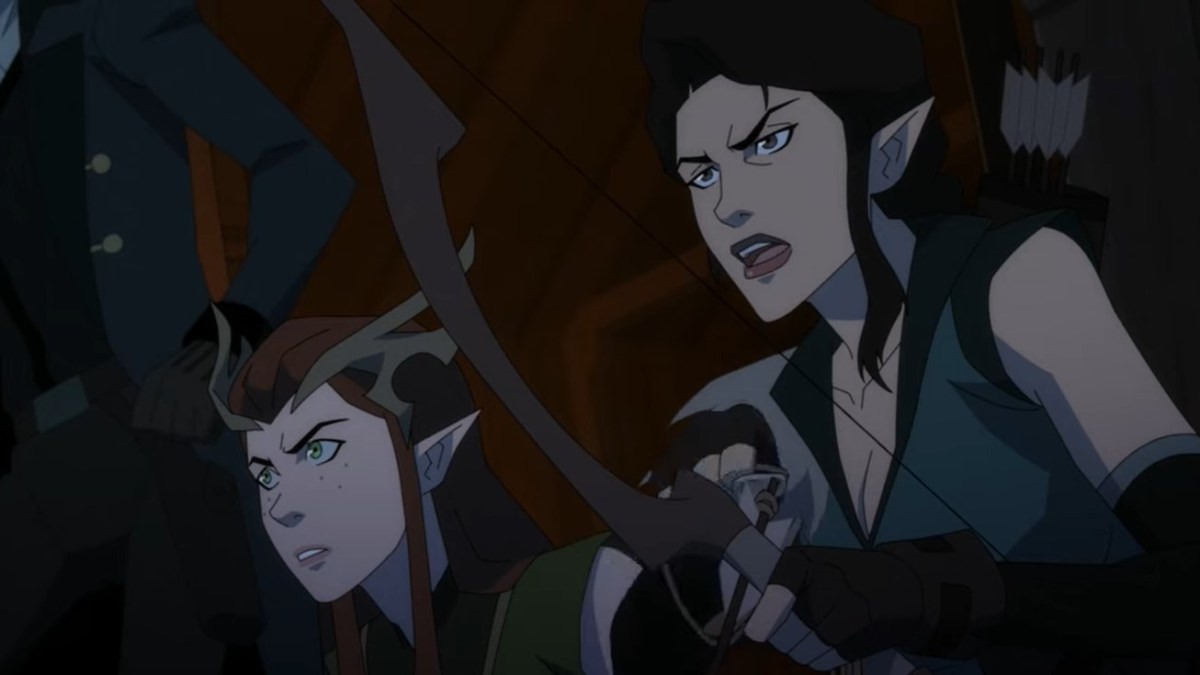 I am trash and I simply refuse to apologize for being this way.

Possessed Vox Machina turns on Percy, but he channels the darkness within and shoots Anders’ tongue clean out of his mouth. His friends regain control of their bodies and kill the sentient tongue, leaving Percy to pull down his plague doctor mask and clear another name from the barrel of his gun.

Cassandra calls to her brother and he’s relieved she’s alive. They find some plans Anders had, and then Keyleth skywrites the de Rolo crest to signal to the rebels that they succeeded, and I loved this moment because it’s one I remember so specifically from C1 for some reason.

Also one last moment that gave me false hope (my fault, not theirs) is when Vex told Keyleth she was “kind of terrified, kind of impressed” by her.

Sick of watching her minions dropping like flies, Delilah Briarwood kills her steward to do a spell…a spell that causes all of Whitestone’s dead to rise.

Back in the temple of the Everlight, Pike is nearly devoured by darkness, but then the goddess Everlight appears, bearing Tracie Thoms’ voice and telling Pike that her lies won’t serve her. 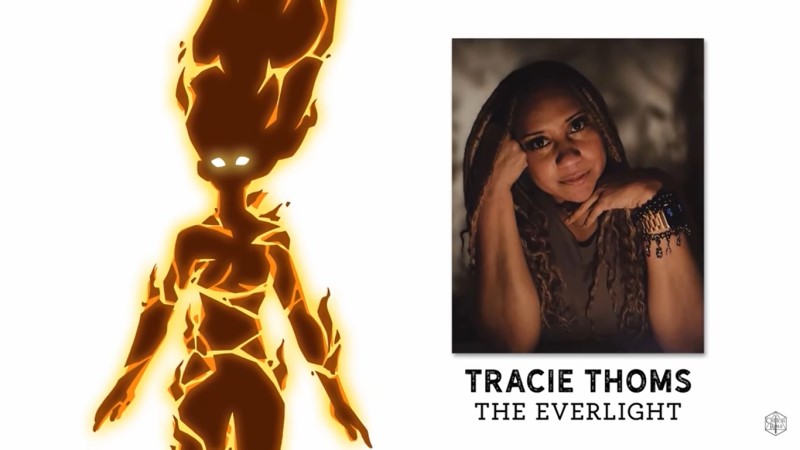 I know Tracie Thoms isn’t queer but she’s played enough iconic queer characters for her to count as a win, imho.

Pike looks within and realizes she’s lying to herself, and admits that she’s enjoyed being rowdy with her new friends. She likes fighting and cussing and drinking, and she fears it’s not what the Everlight would want of her. But Everlight says, “Any path can be a holy one so long as one walks it with truth.” So the Everlight implores Pike to look deep within; does she hold true love for her goddess as well as for her friends? Can she find a way to hold both loves close to herself and be true to herself?

Scanlan is dancing home from his successful side quest when he spots a couple he thinks is making out. He asks to join them (we stan a bisexual bard) but when he gets closer he realizes the only necking going on is that a zombie is biting a man’s neck. He sprints to find the rest of his party, and tells them about the horde of zombies 🎶making its way🎶 toward them.

Episode 109, “The Tide of Bone,” starts with a flashback to the time Delilah used necromancy to bring her dying husband back to life. She tells Sylas to “trust in the Whispered One” as we travel back to present day, when even the bodies hanging from the Sun Tree start to come to…un-life.

Vox Machina starts to fight but they quickly realize how outnumbered they are, so they follow the rebels to safety. But soon, zombies infiltrate their hideout too, biting Scanlan in a way that Keyleth doesn’t know how to heal, and losing a few rebels as they barely escape. (Luckily queer rebel Bryn voiced by queer actor Stacey Raymond is still alive!) Hope is starting to dwindle, and Cassandra encourages Percy to give a speech, but he doesn’t feel qualified. The team jumps back into the fray, Percy and Archie bantering while they fight side by side, until Archie gets sliced nearly in two, freezing Percy in his tracks.

Vox Machina pulls their gunslinger back and Keyleth steps forward, channeling an immense amount of energy and ice blasting a horde. Vax is staring at her basically like a human heart-eyes emoji and Vex says, “Yes, yes, she’s the tits, we still have to go” and drags her brother along with the rest of the party as they flee.

The next time they have a quiet moment, Cassandra convinces Percy to give the speech; after all, without Archie, the de Rolo heir is the only one who can rally them. Percy takes his sister’s advice, so by the time the zombies break through the ice, the rebels are ready.

In the middle of the fray, Vax crushes my Vexleth dreams and admits he’s in love with Keyleth, which Keyleth feels very NOW IS NOT THE TIME about.

As the zombies close in and things start looking grim, suddenly a shiny vision appears, blasting the zombies back with a radiant light. It’s Pike! Well, an astral projection version of Pike, here to save the day. Imbued with the power of the Everlight, she makes everyone’s weapons holy weapons and helps them defeat the zombies like a tiny badass. 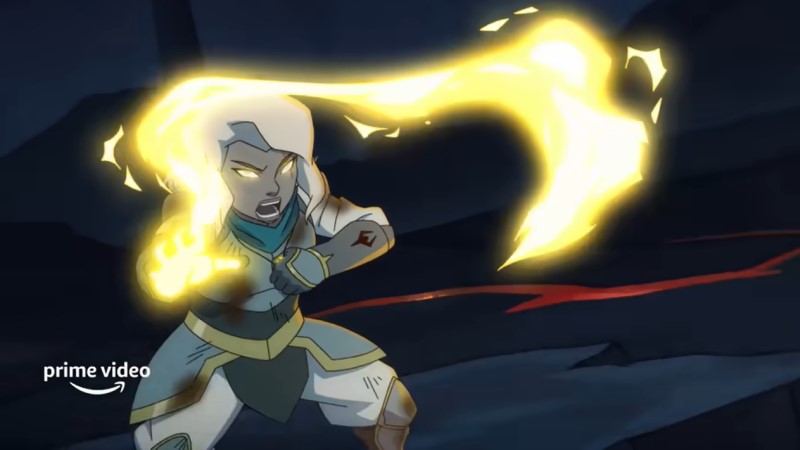 As someone who has been a fan of Ashley Johnson since her Recess days, I love every time I get to hear her kick ass and take names.

Percy finds himself face to face with Vedmire, but since his name isn’t on the barrel of his gun, he leaves his fate in the hands of the people of Whitestone, who dispatch of him quickly.

Once all the zombies are defeated, Vox Machina sneaks into Whitestone manor to get Percy’s seat back. They go into some tunnels, through the dungeon, where they find a woman who swears she’s on their side and wants to help take down the Briarwoods. But Percy and his gun recognize this woman, and he points Pepperbox in her general direction. As the screen fades to back, we hear Keyleth plead with Percy, “Wait.”

As much as I wish my Vexleth dreams would come true, I know it’s silly to wish for a rewrite that large. All that aside, I’m still having a BLAST watching this show, spotting the similarities and differences from the original series, and hearing these nerdy ass voice actors bring these characters to life again in such a fun way. Hopefully out queer queens Lady Allura and Lady Kima will return to us before the season ends with the next batch of three episodes!