This review contains minor spoilers but I took great pains to limit myself to things already revealed in reviews and cast/crew interviews.

There’s a scene in an early episode of The Handmaid’s Tale‘s Second Season where a character devotes themselves briefly to a very much on-the-nose passion project. It’s shocking how rarely The Handmaid’s Tale feels on the nose, considering the premise, so this bit really packs the proverbial punch.

They’ve gained access to the archives of The Boston Globe, which’s now a cavernous shell where freedom of the press once existed. They’re gathering clips from its pages, pinning pieces to the wall under headings like “MILITARIZATION,” “POWER STRUCTURE,” “CURTAILING CIVIL RIGHTS.” They’re building a story, of course, the story of how we got here, and it’s a story composed entirely out of stories we were already told, but ignored. Stories we could’ve read but chose not to. Stories we wanted to see as isolated that were, in fact, components of a much bigger story, one that was devastating for both its seeming impossibility and its clear signals of approach. Signals they ignored — signals so many characters ignored, as we see in flashbacks throughout the season — until one day June was wearing a red cloak with white wings and Luke was tearing through the forest with their sleepy child under his arm and Sabrina Joy was swallowing her strength and Emily was losing a very important part of her body and Janine was losing her eye and her baby and threatening to jump off a bridge and Moira was unrecognizably dolled up to service a series of arrogant hypocrites just to stay alive.

“Yikes,” I said out loud as soon as the clip headings became visible, thinking about how much less often we talk about our current administration this year than we did last year, although the news has become no less horrifying.

It speaks to one of the show’s most enduring themes: thou shalt not remain complacent. Pay attention. Look up. Don’t wait for them to come for you.

But the urge to connect Gilead to The Future America so literally isn’t, usually, quite as urgent in Season Two. Season One set up only the barest bones of this universe, and Season Two begins the work of filling in the gaps, both through flashbacks that explain how the current state of things gradually came to be and by widening its scope beyond Gilead. The result is an even bleaker show than you remember, and still just as good. I mean, The Handmaid’s Tale is just… really, really, really fucking good.

Where we pick up in Season Two, Moira (Samira Wiley) has escaped Gilead and found safety in Canada, where she’s living with June’s husband, Luke (O-T Fagbenle), and working at a processing center for new immigrants in “Little America.” But Moira hasn’t escaped the trauma she experienced in Gilead, which haunts her as she attempts to piece together some kind of life for herself with so much missing, including, she fears, her capacity for intimacy.

At a Paley Center panel with the cast I attended in March, Wiley remarked that even in “little America,” “Gillead is within you” — a line June delivers in the second season trailer. When asked at the panel which element of her character she’d like to know more about, Wiley said she’d love to hear more about Odette, the girlfriend briefly mentioned in Season One who she describes as “the love of Moira’s life.” 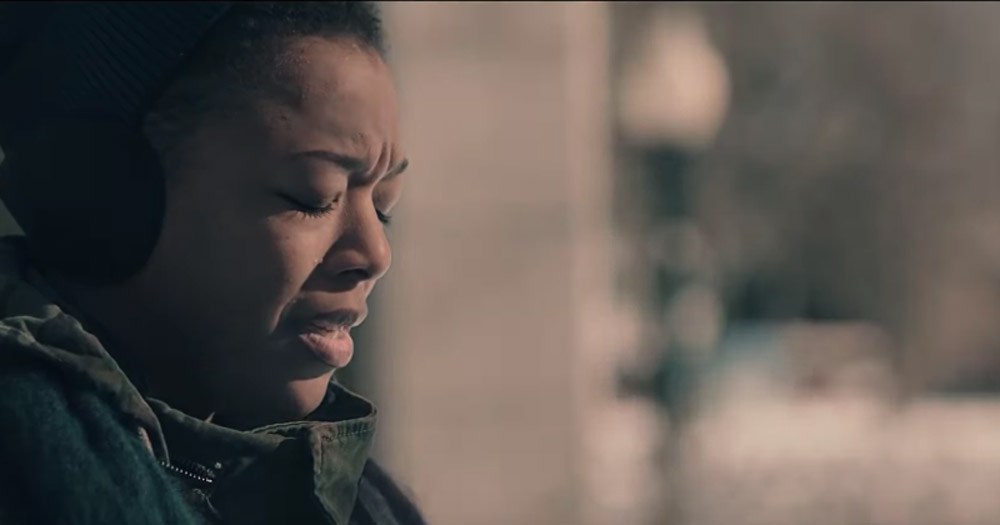 Emily (Alexis Bledel) and Janine (Madeline Brewer) have been sent to the colonies with the other “unwomen.” The Colonies are a scorched Mad Maxish earth of busted yellows and punishing dirt, where they batter the ground with shovels all day and, at night, wash up with polluted water, nurse their wounds, and pray for death to come as quickly as possible. 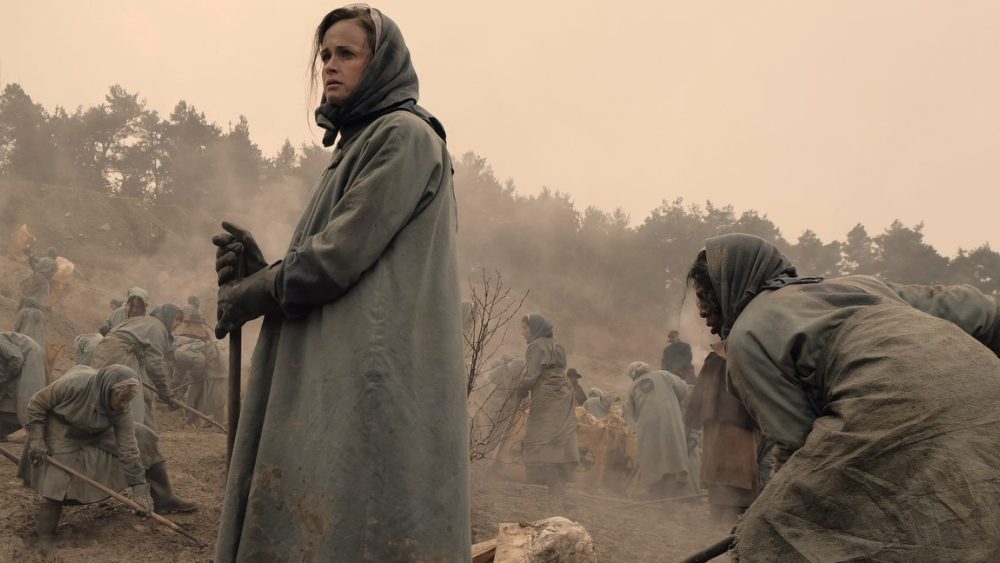 June begins the season eventually on the lam, at the mercy of an underground network of citizens who each do a small part to facilitate escape for women like her, risking their own lives in the process. The season will see her transferred from cage to never-ending cage, forced to adjust and adjust again while often singing to nobody.

In this way, the story of Gilead enlarges as it becomes increasingly specific. It’s not a more severe replica of our own potential future world — if it were, racial oppression would certainly be its primary theme. This is a specific dystopia designed by religious fundamentalists who are obsessed with traditional gender roles, rationalized by a fertility crisis. The persecution of lesbian and gay people, then, remains at its terrifying center, and as in Season One, this hits the gut hard, harder, and harder still. (I’m intentionally not getting too deep into the specifics here to avoid spoilers.)

In flashbacks, we meet Emily’s wife, played by Clea Duvall, and see the sequence of events that led to their eventual separation. We also meet June’s mother, a playful and fierce feminist always preparing for the next political action, brought to life by out lesbian actress Cherry Jones. As in the book, June resists her mother’s radical ideals, preferring to work a normal job, get married and have a family, and later regrets not giving her mother’s beliefs more credence.

In the present, Gilead’s power class remains doggedly committed to the historically elusive goal of convincing the underclass that they should be cool with oppression because it is the way of a Lord their very circumstance suggests could not possibly exist. The powerful could, alternately, just acknowledge that their power is not divine, which’d mean admitting that they are total psychopaths or else just thoroughly corrupted by power or proximity to it. At this point, everybody’s in too deep. Serena Joy, who delighted fundamentalist audiences nationwide with her speeches on a woman’s proper place in the home, now finds herself unable to speak at all, inhabiting the “proper place” for the first time and hating it.

Is anybody in Gilead having fun? There’s no smiling or laughter. There’s no golf club in Florida, no buffets, no champagne toasts, no yachts or private beach, no fame or attention. There’s Jezebels, I guess, and men shooting things, and parties where mothers pretend they’re going to birth babies they’re not actually going to birth. What kind of benevolent and loving G-d would want a world like this and what child would want to be born into it? How long will a system with such limited delights thrive, or instead will the realm of delights be forced to expand, and with it, those who are oppressed to provide them? 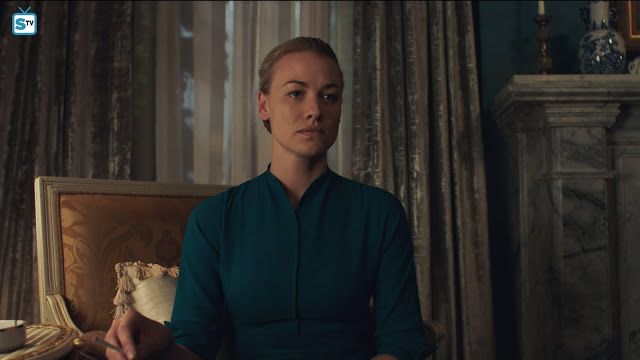 This is not a pleasant world to witness, yet it remains a seductive watch. There are moments of hard, inspiring rebellion, and dark humor, sure, and those moments being hard-won makes them all the more delightful. But at times, we’re quite literally watching rape and torture! There were three — three! — consecutive shots of somebody’s peeled-off fingernail, which felt like a personal attack on my future and the possibility that I could, one day, try to take a nap. The pleasure here is the deft, capable storytelling; the world-building; the cinematography, the byzantine situations these cruel people have created for themselves and now must live within. The moral quandaries, the questions every episode leaves you with, everything kept quiet waiting to burst.

The Handmaid’s Tale, despite being initially based on a book I actually read several times, is the most unpredictable show I’ve ever seen.

There’s also the film-level artistry, and how this season particularly, entire emotional arcs occur sans dialogue, relying solely on facial expressions, visual aesthetics and music. The score truly becomes its own character. Blessed be the f*cking fruit, the artistry! Much has been made, already, of Elisabeth Moss’s winning performance, but Jesus can we take a minute for Ann Dowd as the sadistic Aunt Lydia. “There’s nothing like hot soup on a rainy day!” she delights, delivering a tray to June, who, along with the other handmaids, has just spent an hour outside, in said freezing rain, arm extended, holding a single stone. What an insufferable monster she brings to life, like her morose chain-smoking white-clad character in The Leftovers but on speed and with more power and the misguided grace of G-d.

I expect to suffer a few minor nightmares this season although thus far the six episodes I’ve seen have yet to inspire the nocturnal terror Season One did. I’m not sure why, it’s no less horrifying. Maybe I’m just used to it now.