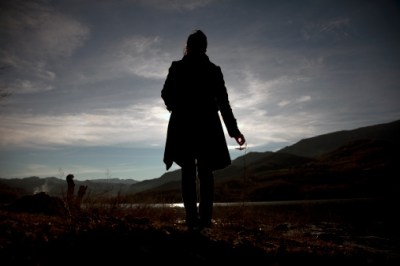 It’s  true, I think, that there’s a person with a name and a face somewhere in the world who’s been writing “The Gay Girl in Damascus,” but we know now that whomever was writing it wasn’t who she said she was.

She was also possibly blogging from Scotland (though she explained away a Scottish IP address by saying it was re-routed there for her safety).

According to a blog post allegedly posted by her cousin three days ago, blogger Amina Abdallah Araf had been kidnapped by three armed men from the Syrian government. There is no independent confirmation that this happened from anyone besides whomever wrote that blog post.

Then a woman in London came forward saying the photos circulating of the abducted woman are of her. Her name is Jelena Lecic and Amina actually kept over 100 photos of Lecic on her Facebook page.

Amina’s girlfriend, who lives in Montreal, admitted she’d never spoke to Amina on the phone, their entire relationship had been carried out via email. Nobody has heard her voice. The Guardian‘s interview with Amina was conducted via email. Excerpts of her blog were found published elsewhere a few years earler.

There’s no record of Amina’s family. The U.S hasn’t been able to verify her existence or citizenship. Voting records don’t turn up family members.

NPR’s Andy Carvin kept up on the story all day.

I admit, as ridiculous as it is to compare Amina’s story — which we may never know — to the story of an ex-friend of mine/ours who I’ll call “X” who I met through my blog and who befriended all of us and invented a fake life which involved lots of tragedies and giving us lots of stuff — the last 24 hours of gradual information-gathering felt alarmingly familiar. Last night when Sarah mentioned that it was possible the blog was a hoax I felt right away that it was. There are only so many ways to evade revelation of any big lie.

She avoided face-to-face contact with unverified excuses (Skype video chat doesn’t work) or with frightening/tragic yet totally believable stories to explain strange behavior (she was being followed to her Guardian interview) and she described her life circumstance as such that any erratic behavior would seem justified, she never really verified her existence, and passed off photos of someone else as being her. Then when she couldn’t take it anymore, she made up a story too horrific for anyone to dare second-guess and made her exit strategy.

We trusted the Damascus Gay Girl because we wanted to. She’s brave, she’s heroic, she’s using the relative privilege of her American citizenship to oppose the plight of America’s favorite sympathy cause, Oppressed Muslim Women in the Middle East! And on top of that, we can’t imagine why any human being would do something like this. She seems so level-headed in her writing.

This is unlikely to win anyone a book deal without a public mud-smearing, anyone with their head on straight would know lying isn’t ever the best way to handle a sensitive political issue.

So what happened, why would she do this?

I think sometimes people are addicted to being worth it. To having the best story, to being praised and appreciated for doing a genuinely good thing, even if it’s a lie and you’re not really doing it. Anyone constructing a lie this massive has lied before, she’s likely spent her life creating and escaping various webs of lies, leaving destruction in her wake — this time she could be a part of something worthwhile. It’s hard to believe anyone would lie to steal the feeling of being a good person, usually we imagine people lie for money, or sex, or to save their own lives. But they do it all the time, right?

Or people are addicted to the praise and positive attention — and like a gambler tossing more onto the table, as the attention increased — she just couldn’t stop. Maybe she never expected it to get this big. Though Lecic says she doesn’t know anyone by that name, it seems like whomever did this probably knows her, although it could be traced back to an identity thief a year earlier.

But we do have an opportunity here to use the increased attention this investigation has inspired to educate ourselves about the truth of the situation in Syria and do what we can to help.

I’m not gonna lie I knew absolutely nothing about the situation specifically in Syria until this whole blog controversy came up. Something about it felt odd to me from the get-go — her blog — so I didn’t really read it until after the alleged kidnapping. I’m not certain this story has been entirely a distracting waste of time.

So I mentioned “X” earlier, my friend who lied. After we’d busted a handful of X’s lies/tragedies, including lying about her mother’s cancer and eventual death, a friend of both of ours who’d been battling cancer confided in me:

“So, personally, a lot of X’s fabricated issues cut me real deep at the time, there seemed to have been a lot of parallels and timing coincidences that made me really feel for her, because I knew how I felt and thought we were experiencing these things together. I still can’t get my head around how she could want to make up this life so she could feel these things. It was really hard hearing that her mother died of cancer (and seeing the effect of this on X) at the same time that I was/am shit scared that I will die of cancer and how it would affect the people I love.

I think I could give X some really good insight as to how a potentially terminal illness and grief really feels.

And just like you, I don’t take death lightly – and I only wish that someone would tell me that the deaths I have grieved over this last year were all a lie. But some of us aren’t that lucky I guess, for some of us realities are actually reality, tragedies are actually tragic and the unbelievable is actually to be believed.”

Resources on the situation in Syria: 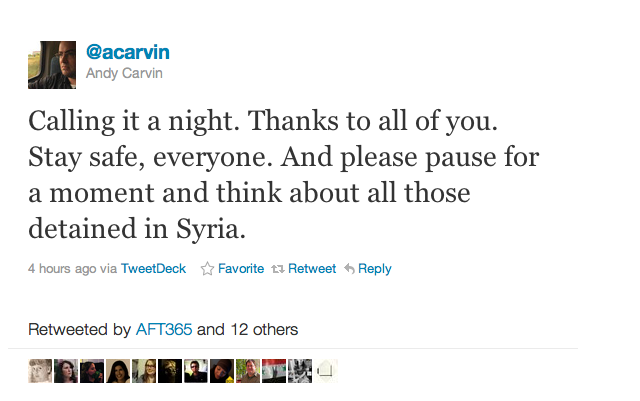