Oh hi there. Are you going to Bonnaroo this year? Our editors Laneia and Sarah F*cking P*lmer are there as we speak, and so I’m gonna shelve my jealousy for a moment and tell you about a few of the talented, slightly lesser known female artists that’ll be shining on the Bonnaroo stages this weekend.

Jessica Lea Mayfield is a 21 year old singer/songwriter from Ohio who has a smokin’ hot drawl that I could listen to forever and just might. It’s difficult to lump Jessica Lea Mayfield’s sound into one, or even three, genres ― it’s a little folky, a little bluesy, a little country and a little indie pop/rock. Have a listen.

Earlier this year JLM released her sophomore album, Tell Me, which is filled with simple hooky songs about love that all sorts of people with all sorts of feelings can relate to. Also it’s produced by Dan Auerbach from The Black Keys, which makes it even more special. You can buy it here.

Somehow I’ve only recently discovered Sharon Van Etten. Her Bonnaroo biography states that “[Sharon has] had some bad experiences in relationships. OK, more than some,” which compelled me to download all of her music immediately.

There’s something so incredibly alluring about this artist. It’s largely her music, which is stunning in ways that I’ve spent hours trying (and failing) to describe. But also partly because she doesn’t  promote herself with the same level of intensity as other singer-songwriters. Her most recent album, Epic, is (self)described as “laying a romantic melancholy lining over the gravel and dirt of heartbreak, without one honest thought or feeling,”  which is funny because it’s not quite true.

Epic is a short but stellar record, I’ve fallen in love with it and you might too. Get it here.

If you need more Sharon Van Etten in your life, I recommend checking out NPR’s tiny desktop concert or Autostraddle’s anticipatory Bonnaroo 2011 playlist. 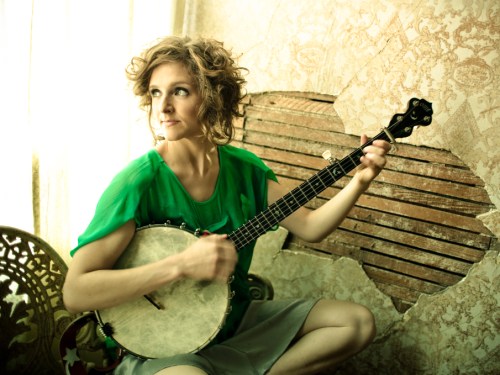 This Illinois-born, Nashville-based artist plays upbeat folk tunes on her banjo that’ll put a swing in your step and sunshine in your heart.

The New York Times once described Abigail Washburn as “Appalachia and folk-rock, with tinges of Asia and Bruce Springsteen”, which is fascinating and appealing in equal parts, I mean really who can resist a beautiful clawhammer banjo player who sometimes sings in Mandarin. Not me.

You can download Abigail’s latest album, City of Refuge, here.