Previously on The Fosters, Stef got cancer and handled it in the most Stef way possible, which was: to not talk about it and pretend it wasn’t happening and to focus instead on dealing out justice to all the people in the world who’d every hurt her babies, starting with arresting Ty. Mariana joined Brandon’s Romeo and Juliet rock opera. Callie got into accidental cahoots with a foster care advocacy bad seed. Jude felt sad about Connor. Grandma Annie decided to stay for a while. And Jesus couldn’t figure out which end of a hammer you’re supposed to hit stuff with, so he went off searching for his birth dad.

Stef and Lena are at the doctor talking about the specifics of Stef’s mastectomy. And bravo to these writers for not shying away from showing an anatomically correct breast on TV and for talking about the physical details of having this kind of massive, intensive surgery and the process of reconstruction. Lena’s taking in every word, but Stef’s staring at anything besides the doctor — picture frames, knicknacks, piggybanks — and imagining herself swimming naked in a kid-free pool on a cancer-free Sunday. When the doctor asks if she has any questions, she says, “Nope.” And that is also what she says when she gets home and her mom is ready to discuss her cancer with the whole family. She wants to wait until the surgery is scheduled to tell the kids and honestly she’s not worried about them finding out on accident because at least once person has been standing in this kitchen hooting “CANCER!” for the last 72 hours. 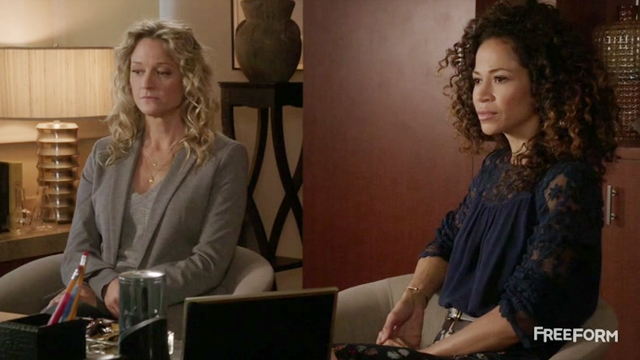 What did the grape say when the hippopotamus stood on it? 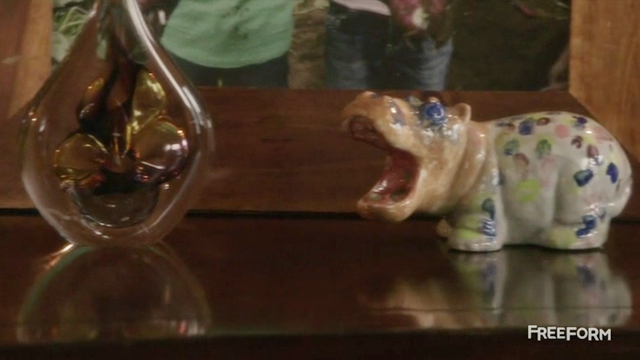 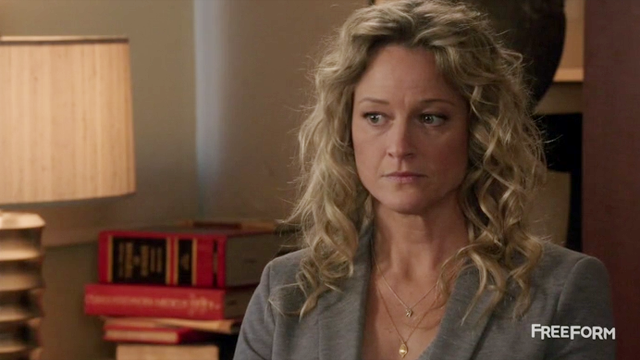 Nothing, it just let out a little wine.

The main problem with giving a TV lesbian cancer is it almost universally leads to that TV lesbian dying, and because the trope that has hurt us the most over the years is Bury Your Gays, there’s no way to praise a cancer storyline, no matter how well it’s written and no matter how true to life it is. But since The Fosters is obviously not going to kill Stef, I feel okay saying how beautifully I think this show is handling her story, especially the part where she and Lena grapple with it as a couple. This episode was so real it made me feel sick (in a good way).

Anyway, they don’t have time to dwell on the cancer. For one thing, Callie had some time before school today to stop by jail and talk to AJ, but he has not included her on his allowed-t0-visit list, so Callie pulls a Brandon and storms home and blames Stef for being Cop Stef and not Mom Stef (as if either of those things are extricable from her identity!). And then it gets worse because Mariana comes clomping downstairs and asks Lena if she’s having an affair with Monty, because guess what? Everyone on Twitter’s saying it’s true and shipping it and there’s totally a flash animation of Lena and Monty bumping up on each other. Lena says no! Don’t be ridiculous! And her phone rings and it’s Monty and Stef’s eyeballs almost roll right out of her head and onto the floor and out the door and down the street and into the sea.

Mariana’s gonna stop this Lena/Monty hashtag with a whole other hashtag, and tag her hate on Tumblr. 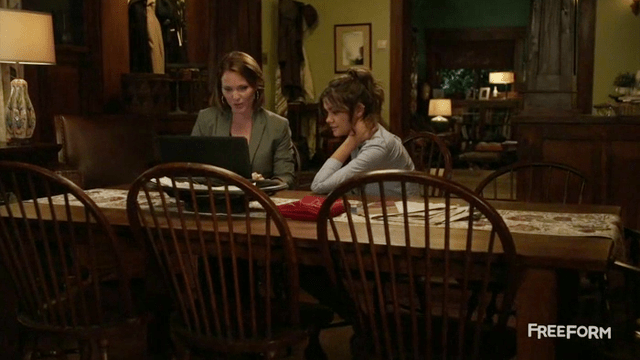 I think I’m a Gryffindor/Slytherin hybrid. 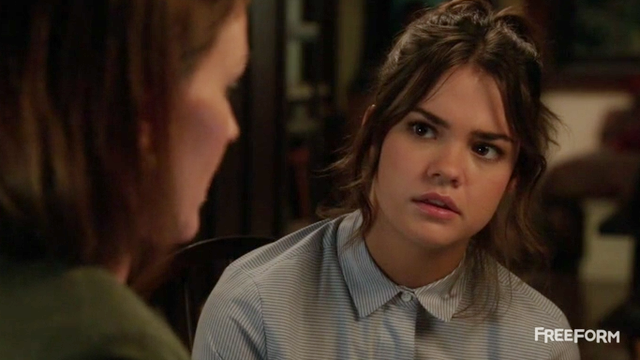 That is not even close to being a thing.

Also before school, because I guess she wakes up at like 3:00 am, Callie is having a meeting with the duplicitous foster care advocate who’s name I can’t remember. Let’s stay on theme and call her Ms. Polonius. She tells Callie not to worry that people are being moderated very strictly on Fost and Found, it’s for their own good, the internet can get real mean, and anyway, if it weren’t for her superior team of moderators, that rumor about Callie would still be posted in the forum. The one about how she slept with her foster brother. And, you know, just by the way, it’s not like they’re cross-referencing the California foster care address database with the IP addresses used by kids who post on Fost and Found to match-up usernames with foster kids and monitor everything they say, buuuuut they know someone was masquerading as AJ and catfishing Callie and that person was using Jude’s computer in this very house. So, like, just this once they’re doing that thing she says they’re not doing.