Previously on The Fosters, that girl with the glasses at the trinket shop dimed out Callie for buying a toy dog that she gave to Daphne who gave it to her daughter who returned home from being kidnapped with it in her pocket. Mariana decided to go on tour with Someone’s Little Sister even though Brandon still wasn’t sure he was going on tour with Someone’s Little Sister because Stef and Lena refused to let him sleep in the trunk of his car all summer. Jude went on a “group date” with some girls and Connor, but really it was a “date date” with Connor. And Ana asked Stef and Lena to adopt her baby.

For the first time in Callie’s life — actually, maybe for the first time in the life of any ABC Family teenagers — she has a competent lawyer who arrives at her work to keep the cops from getting her to say something incriminating about that toy dog. They try the good cop thing, the bad cop thing, everything but the Rosewood Cop thing (the 50-year-old man doesn’t try to make out with Callie), but she won’t budge on facts because her lawyer tells her not to budge on facts. He points out to the cops that the toy dog in question is one of sixteen million exact same toy dogs and not some kind of antique curio, so move along. 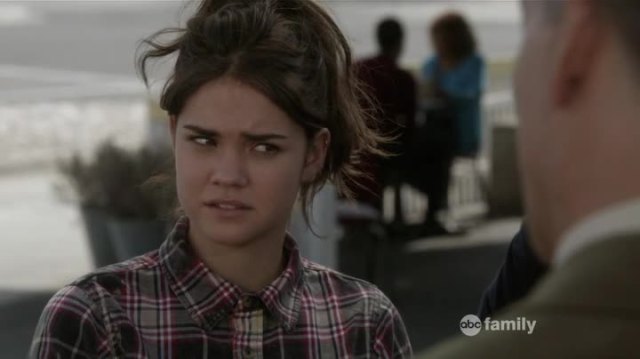 No, sir, I have not been in possession of any shovels.

Callie has Robert drop her off a couple of blocks from home, and he of course takes the opportunity to remind her that kidnapping is a big time crime and she could go to jail for her whole life, and she definitely can’t get her moms wrapped up in it because one of them is a cop, so the best thing she can do is talk to no one but him. It’ll be their little secret. And he’ll fix it. Ugh! UGH! I hate you more every day, Robert!

But Callie’s anxiety doesn’t stop there. When she walks in the front door, Stef and Lena are like, “What do you have to say for yourself … about getting up at 5 am to go to work, you little angel!” Which is a nice psyche out for once in Callie’s life, but then Daphne is waiting upstairs to borrow clothes for her visit with Tasha. She wants something that says, “I am a grown-up professional woman whom you do not recognize as the lady who took you from the park.” Poor Daphne. Poor Callie. Poor everyone on this show who isn’t stupid Robert.

Brandon’s band is playing a “pharm party” tonight, which, like Brandon, I definitely thought was a “farm party,” and to be honest, that sounds way better than a party where everyone takes random, unlabeled pills out of a fishbowl. KIDS THESE DAYS. Brandon’s a little skeeved out by the concept, but Lu says they’ll give him all their door money so he can start saving up for motel rooms for the trip, so he’s all in. But he forbids Mat to invite Mariana. Mat’s like, “Joke’s on you, sucka, ’cause she’s touring with us too.” Mat’s actually a little surprised that Brandon doesn’t know to be scared of Mariana. 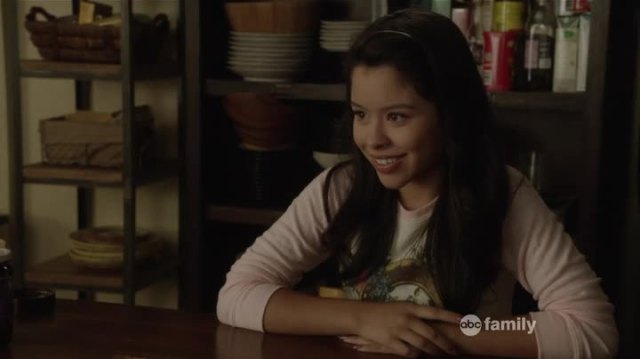 I want to join the debate team. Really learn how to argue, you know? 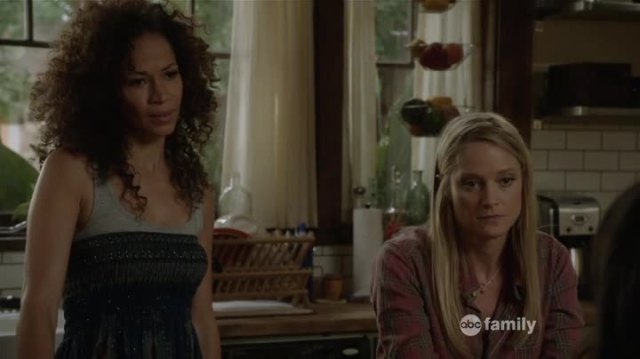 Stef and Lena aren’t really scared of her, but they do recognize her as a formidable intellectual opponent. Right now, for example, they’re trying to talk to her about how babies aren’t interchangeable like lug nuts, and so Ana’s baby can’t replace Frankie. Which, Mariana gets it, but also that baby is going to be her biological half-sister and they took in Callie and Jude, and they weren’t related to anybody in this house. She huffs off up the stairs in a cloud of righteous teenage anger and above average intelligence.

One of the one billion things I love about Stef and Lena is how they lean into each other and rely on each other to define the intricacies of their collective ethos and give each other the strength to be like, “I’m going to be the hero you need; not the hero you want.” You know what I mean? Which is like 80 percent of being a good parent. And 80 percent of being the kind of human who actually is trying to be the change they want to see in the world. And damn, man, if you can find someone who challenges you to be the hero the world actually needs and comforts you when you’re not the hero anybody needs and also wants to have sex and watch Netflix with you? It’s the most any of us can aspire to on this earth, I think. It’s actual nirvana.

What Lena explains to Stef — even though she doesn’t have to, but I think for her own conscience she just needs to sound it out again — is that she wanted the experience of being pregnant and having a biological child. It doesn’t mean she loves her children any less or that Stef loves Brandon most of all; it just means that she craved a specific maternal experience that didn’t work out. She didn’t just want a baby for the sake of a baby. Stef gets it. 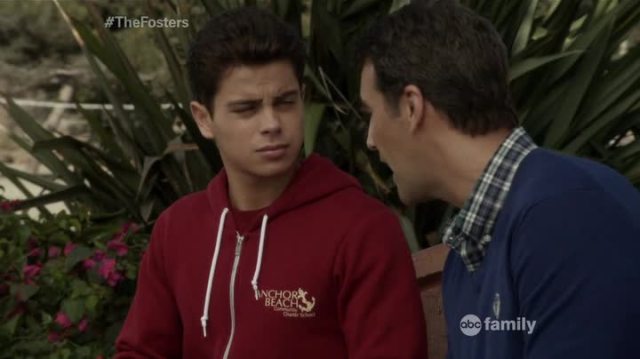 Is free tattoo removal one of your school’s perks? Asking for a friend.

At wrestling practice, a coach from a prestigious private academy shows up and offers Jesus a full scholarship. The benefits are that it’s one of the best schools in the country and it’ll be free for him and he can win wrestling awards and probably a college scholarship, and they teach academics in a way that’s good for kids with ADHD, which means they don’t make them sit still and listen to adults talk for seven hours a day. The coach also pitches “no distractions” as a selling point, and Jesus knows right away that he’s talking about girls, and so that’s of the opposite of a selling point to him. (And any other correct person.)

Because she was unable to outwit Stef and Lena, Mariana goes upstairs and lies in wait for any old sibling to come by so that she can showcase her superior powers of persuasion and wit. Luckily for us all, it is Brandon who wanders by the tall grass. She pounces him and he’s glad for it. He tells her she’s not going on tour with his band, and she’s not going to the pharm party, but by the time Mariana is finished with him, he’s practically convinced that if she doesn’t come to both of those things and he doesn’t give her one hundred dollars and a bag of Skittles, he won’t even know how to play the piano anymore.

And then! Y’all, then! Mercifully! All of the children leave the house! Callie goes to the Foster Center to volunteer, Jude goes on another “group date,” Brandon and Mariana go to the pharm party, and Jesus is at wrestling practice or something. Chasing a penny down the sidewalk for three hours. Making funny faces at the fish at the aquarium. It takes Stef and Lena a few minutes to adjust to the glorious sound of silence, and: 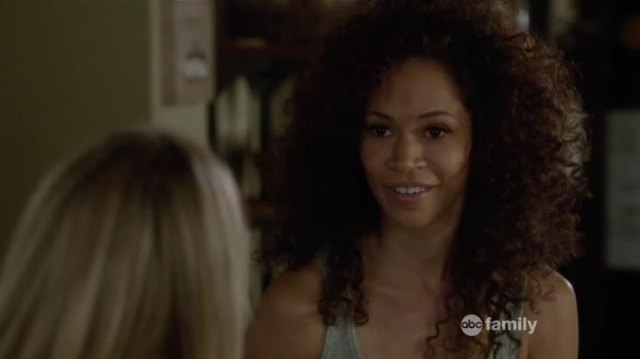 And if you want to get really sexy we can get the pizza with the cheese stuffed into the crust!

Lets’ do the Foster Center first and then the pharm party and we’ll save the scissoring for last. Hashtag foreplay.

Daphne is waiting for Tasha’s social worker to drop her off at the Foster Center for their visitation and she’s about to throw up from nerves, and that’s before Tasha’s foster mom shows up, uninvited, and starts screaming that Tasha is her baby and she knows Daphne kidnapped her and she’s going to make her pay and if she really loves her daughter she’ll do what’s best for her and let her get adopted. It’s a hard thing for everybody to hear. Tasha, for starters, because she’s just a baby and the woman who feeds her and changes her diapers is screaming and the woman who she remembers as vaguely loving her is crying. And also Daphne hates hearing that because it’s true about the kidnapping, but she brought her back and she loves her more than anything! And Callie, of course, because this is like looking in a funhouse mirror where Daphne is Robert and she is Tasha, kind of. 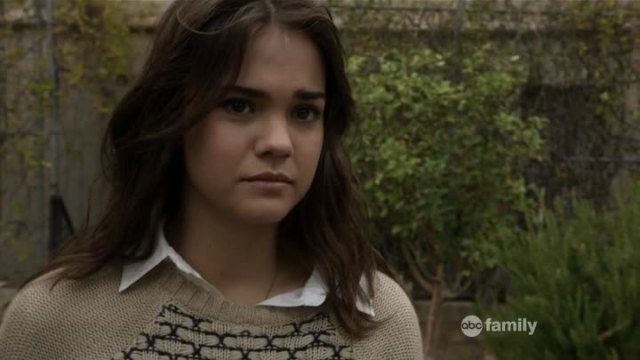 I wonder if I should get back together with Brandon. 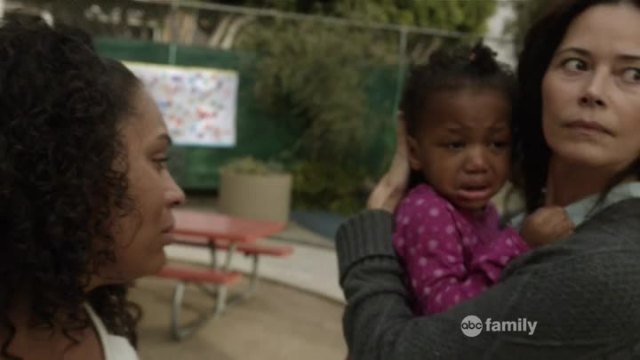 Raphael pokes Callie about it, later, asking her if it’s true about Daphne, and offering her a ride home so they can talk it out. He’s a good dude. He grew up and out of the foster system without ever having a permanent home, and so he went to college and grad school to learn how to fix the broken system. Callie recognizes his goodness, but also she doesn’t want to talk to him for a single second because her whole life is a tilting Jenga tower and if she lets just one person pull at one rogue block, she’s going to topple apart in an irreparable heap. She decides to let Raphael drive her home. First, though, she tells Daphne that the police know about the toy dog and she’s got to keep that shit on lockdown or both of them and Brandon are going to end up in jail.