1. People were surprised by how hot the cast of OITNB is.

The cast of Orange Is The New Black looked stunning, per ushe, causing everyone else’s brains to fall out of their heads onto the red carpet. Approximately 10 gazillion highly original comments were made about how great the actresses looked out of their prison jumpsuits.

People mostly played it safe on the Red Carpet this year. Except Lena Dunham, who wore Giambattista Valli and presumably doesn’t care if you like it.

The song was pretty meh. Then we got to Weird Al’s boobs joke in the Game of Thrones theme, and all I could think of was Seth McFarlane’s monumentally gross “We Saw Your Boobs” montage during the the 2013 Academy Awards. Ugh.

It would be easy to dismiss as an isolated, well-meaning-but-not-funny thing, except…

3. Sofia Vergara was literally put on a pedestal and objectified.

Image via Mic and Buzzfeed.

Bruce Rosenblum, chairman and CEO of the Academy of Television Arts & Sciences, gave a speech about diversity while Emmy-nominated actress Sofia Vergara spun on a rotating pedestal. The audience laughed and clapped at her butt while she spun around like a car in a showroom. Seriously.

Vergara responded to criticism, saying, “I think it’s absolutely the opposite. It means that somebody can be hot and also be funny and make fun of herself.” 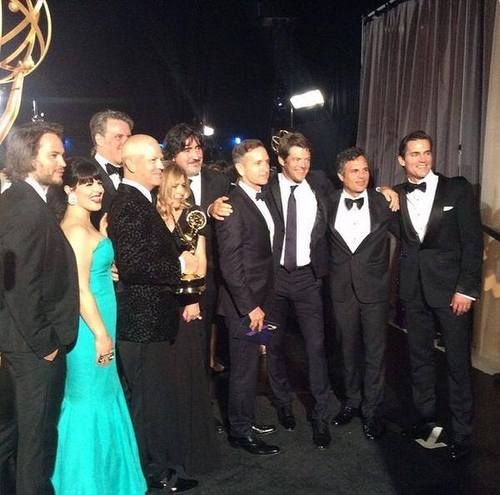 Ryan Murphy holds the Emmy along with cast members of The Normal Heart. Via Radostm Tumblr.

Now, I know it’s not a competition within the queer community. Gay men need representation and I’m sincerely happy they’re finally getting it. But I’m hearing a lot of congratulatory statements about LGBT inclusivity, when really, it looks a lot closer to GGGG inclusivity. That isn’t adequate media representation; our lives and experiences are not interchangeable.

I have mixed feelings about this, especially because…

5. Modern Family beat out Orange Is The New Black.