For the most part, it’s not unfair to allege that the most powerful social forces aligned against gays in America are the Republican Party, the religious Christian community, and the Church of the Latter-Day Saints. But sometimes support is found in unlikely places, and there are people in your corner who you had been 100% sure were actually all the way in the opposite corner. This is one of those weeks.

For example, Gene Robinson has always been supportive of gay causes, being that he is openly gay. But the church he belongs to hasn’t, and when he first came out in the 1980s, he felt sure that his “life in the church was over.” But it wasn’t over, and in fact is still far from over today — he’s the Episcopal Church’s first elected openly gay bishop. While he’s announced that he will retire in 2013, right now he’s still having an enormously positive impact on his religious community. For instance, this week he gave a presentation to an adult faith community in Louisville:

“I know Jesus to be the son of God,” he told a group of about 50 people, “but what a small, limited God we would have if that was the only manifestation. I think Christians should stay away from spiritual arrogance and show more love, mercy and zeal for justice.” He called on audience members to present an alternative to the activism of the religious right, saying, “I believe that there’s a positive role for religion in the world, and we’ve already seen what not to do.” 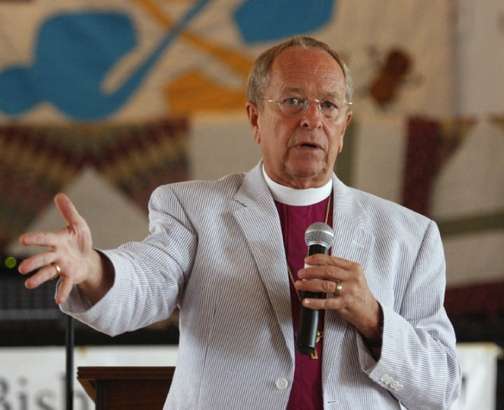 Progress is also being made towards a shift in attitudes in another religious community, perhaps even more surprisingly. In Utah, the new Democratic Party Chairman, Jim Dabakis, is an openly gay man – and he’s reaching out to form a relationship with the LDS Church on behalf of his party and his community. Dabakis has previously worked with the LDS Church on a Salt Lake City ordinance that would protect gays and lesbians from housing and employment discrimination – one that Utah Republicans were forced to accept without a fight when they realized their opposition didn’t have the backing of the Church. Now he’s building connections to try to make the point that Mormon and Democratic values aren’t mutually exclusive. He considers the intense anti-gay activity of the Mormon church to be the exception, not the rule of Mormon values, and doesn’t feel it reflects the feelings of voters.

…he said being openly gay was never an issue during his campaigning. “It shows how fair minded and decent people are,” Dubakis said. “Utahns are basically fair, honest, decent people…” He called voters who practice the Mormon faith a “tremendous resource” and believes they want the chance to be part of the “normal, moderate, reasonable party that we are” in light of what’s been happening in the Republican party.

via the salt lake tribune

Dabakis’ career in Utah is just beginning, and there’s no telling what progress the Democratic party might make under his influence, or what a difference it may make to have such a prominent openly gay face in Utah’s state government. At the same time, change is coming in another party – we may be seeing the beginnings of a coherent and coordinated Republican push for marriage equality.

“The opposition [to same-sex marriage] is well organized and gets a lot of media attention, but [I felt] there had to be an alternate group for Republicans that want to say ‘marriage is a great thing to promote, we’re glad that the gay community wants to be married, and we want to be supportive of that in our own political party… “We (Republicans) are pro-stable family, which marriage provides, and so when a gay man or a lesbian says ‘I want to be married’ we should encourage that,” he said. “It’s good for society and it is consistent with what the Republicans say they believe.”

Angelo supported maintaining Iowa’s status as one of the only states in the Union where same-sex marriage is legal, and opposes the rest of his party on the issue of trying to reverse the courts’ decision in that state. He’s founded the organization Republicans for Freedom, which specifically supports gay marriage, and which publicly disagrees with popular Republican opinion. Angelo says the Republicans for Freedom want to set a precedent with what they’re doing in Iowa, and hope their work there will inspire others. While at one time agreed with the party line, he’s since had a change of heart, and hopes that he can effect change in his peers for the sake of the health of the Republican party, and to convince gays who don’t consider themselves Republicans that the party can have their best interests at heart.

These are all beginnings, not things anyone can clap themselves on the back for just yet. But as Gene Robinson’s story demonstrates, the place we are now is so different and the landscape so transformed from what it was only a few years ago, that we can only imagine what it will look like in another five years or a decade. There’s more bad news every day, but it’s good to remember that we’ve gone from “You’ve gotta give them hope,” to seeing hope and slow but steady progress in the world all around us. There are still plenty of people in power – most of them, even – who refuse to acknowledge that there’s a problem, that change is necessary. But there are finally also people and organizations in power who are taking responsibility for making change happen, and that’s unequivocally good news.