A couple of the images below are slightly NSFW.

So the Summer Solstice happened like a month ago which means the days are just getting shorter and shorter by the minute (for those of us in the Northern Hemisphere, anyway). But don’t despair, Autostraddlers! We’ve still got a good month and a half left, which means plenty of time for BBQs, porch drinking, summer romances, illegal fireworks and all that good stuff. And you know what will make that even better? Some most excellent summer mixtapes. In addition to the explosion of rappers who have dropped mixtapes this month, including Lil Wayne, Outlawz and Jean Grae (you should probably download this one), here are a few of our favorites:

Let’s get the obvious out of the way first: he album art. There are boobs and a sloth. Whatever argument you were about to make is clearly invalid. Anyway, Moombahton. Moombahton is poised to become the new dubstep in terms of its rising popularity and memeification and it’s a genre that’s not even two years old. Its origins can be traced back to a house party outside Washington D.C. where Dave Nada, a DJ accustomed to house and techno playing to a crowd of reggaeton and bachata fans, slowed down the Afrojack remix of ‘Moombah,’ a popular Dutch house track, from 130 beats per minute to 108, about the tempo of reggaeton. Hence the portmanteau and a style that would explode locally, and eventually, with fans like Diplo, globally.

Diplo’s salute to Moombahton comes in the form of this mixtape, which is heavy as hell and summer house party-perfect. Highlights include a couple of bangin’ remixes of ‘Que Que,’ Diplo’s track with Dillon Francis and Mad Decent regular Maluca, featured on MD’s Dave Nada-curated Moombahton comp, remixes of crowd-pleasers from Luda, Missy Elliott and Indeep and a snappy Jamie xx remix of ‘Rolling in the Deep’ you can sh-sh-shake it to. Get it for free at the link above or by subscribing to the Mad Decent podcast on iTunes or Mad Decent Radio.

There is nothing that says ‘summer’ quite like a sequel, but in this case, it’s a good thing. Last summer, UNDRCRWN, DJ Jazzy Jeff and Mick Boogie brought us the definitive summer BBQ mix, featuring warm-weather classics across the hip-hop, soul and funk boards. This month, they blessed us with a follow-up of 40+ tracks featuring everything from ’80s cheese (Steve Winwood’s ‘Higher Love’) to junior high jams (Jagged Edge’s ‘Where The Party At?’) to choice cuts from Native Tongues alumni (De La Soul’s ‘Buddy’) to songs so wonderful not even will.i.am can ruin them (Talib Kweli’s ‘Hot Thing’). Oh, and did we mention Stevie Wonder? There’s always room for Stevie Wonder. And yes, you’ll find Jazzy’s own tribute to the summer months, ‘Summertime’ (with his Royal Freshness, Will Smith) on both playlists. Lucky for you, this year’s and last year’s mix are available for free download at UNDRCRWN. Now put the beer in the cooler and give the neighbors a call.

(photo of cherry la voix for tsurufoto’s NUDIEZINE, issue 7, by tsuru, get it on etsy)

Photographer, filmmaker and music geek Aaron/Tsuru is a big fan of the mixtape, so we knew the choice of summer cuts at TSURURADIO would include a lot of standards and be season-perfect. It’s the mixtape equivalent of one of those atomic-red cherry ice pops — sweet, sticky bliss from Dan Deacon , MGMT, Beck, She and Him and more. And the closer? ‘Barbara Ann.’ It ain’t summer without poor attempts at creating those Beach Boys harmonies while driving / biking / walking around with yer mates now, is it? Download it as a .zip file or listen to it via SoundCloud.

Included because I dig the concept: for the past two summers, dailybeatz has asked the folks behind popular music blogs like My Old Kentucky Blog, Gorilla vs. Bear and Aquarium Drunkard to send their favorite summer track and they’ve made a mixtape from the selections. Seeing as the curators are music bloggers, there’s a whole lotta buzz bands up in here, including Purity Ring, Cults, The Weeknd and Cold Cave (who were the talk of Twitter this weekend for their performance at the Pitchfork Music Festival), and a cut from one of this Autostraddler’s favorite buzz acts of 2011, Shabazz Palaces, an avant-garde hip-hop project from Ishmael Butler (Butterfly from Digable Planets). Good stuff all around. Stream via SoundCloud or download via .zip.

Speaking of buzz bands, Cold Cave made a summer mixtape too. Originally made for a mixtape exchange with a friend, the band says on their Tumblr that the playlist is ‘made with you in mind’ (awwww!) and features ‘songs for the summer indoors against the exhaustion of traffic outside.’ It’s perhaps the folkiest selection in this bunch, featuring gems from The Incredible String Band, Vashti Bunyan and Billy Bragg. Get it on their Tumblr.

Not a mixtape per se, but for the second year in a row, NYMag’s culture blog has asked a wildly popular DJ/producer/party curator to put together an ultimate summer playlist (Danger Mouse put together a pretty great one last year), and this year, Girl Talk’s Gregg Gillis has created a 154-track magical beast of a mix. His choices will come as no surprise to fans of GT — tons of crowd pleasers, a bit of nostalgic kitsch (‘Blinded By The Light’) and a genuine veneration and love for many, many different genres and eras. Blur, Boards of Canada and Bone Thugz all in a row? Yes, please. Regardless of what you’re serving at your summer BBQ, this playlist will certainly satisfy all musical omnivores. And although a consistent stream isn’t available, Vulture has arranged the songs into four alphabetical YouTube playlists for your listening pleasure.

And a bonus mix that’s from last summer but still just as boss: 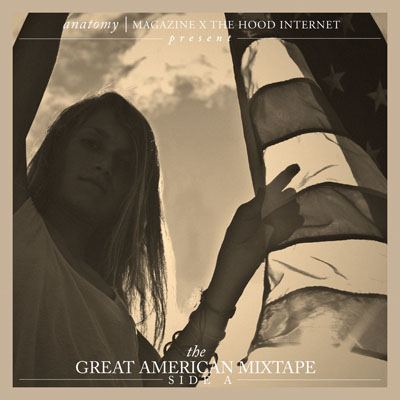 The Hood Internet and Anatomy Magazine’s The Great American Mixtape, Side A

Last summer I worked at a music magazine and the week this mixtape from Chicago’s favorite Mac-wielding mashup masters dropped, it was pretty much all the interns listened to. Here, we find Messrs. ABX and DJ STV SLV expanding on their usual format — melding radio-ready rap singles and indie staples or Williamsburg flavors of the month — and bring a lineup that’s more stacked than the New York Yankees. OutKast with Dirty Projectors; Lil Troy’s ‘Wanna Be A Baller’ cutting through TV On the Radio’s frantic scuzz. They even make Asher Roth dance party-worthy. But it’s the bookends of the mixtape that are perhaps the best: Jay-Z’s boasts are elevated by the ah-ahhs and blips of LCD Soundsystem’s ‘Dance Yrself Clean,’ and Three Six Mafia makes an ideal companion for that heavenly piano lick from The Hold Steady’s ‘Stuck Between Stations.’ You can listen to it as a SoundCloud stream at the link above get it for free by signing up with Anatomy‘s website.