After its exciting and fun first two episodes, The Bold Type returns with more fashion closet hangs and workplace drama for Kat, Sutton, and Jane. “The Woman Behind The Clothes” continues the show’s exploration of the interplay between fashion, sex, feminism, and politics. Jane’s journey on this show sees her trying to figure out what kind of writer she is, and both Scarlet and The Bold Type suggest that she can write about all of these things at once, further expanding the boundaries of what a mainstream women’s magazine can be.

As outlined by Kat in the pilot, Jacqueline’s approach to the magazine is “stealth feminism,” presenting larger ideas about empowerment, sexuality, and bodily autonomy within style and fashion writing. The Bold Type itself has a similar mission, using a sexy workplace drama to unspool compelling — and occasionally subversive — stories about women, work, and sex. With shoutouts to Elizabeth Warren, Kamala Harris, Planned Parenthood, Madeline Albright, Emma Watson, and Hillary Clinton’s pantsuits all stuffed into this episode, The Bold Type verges on being a little too grabby with its contemporary cultural touchstones. Peppering the show’s world with real-world details relevant to the show’s central themes can be fun, but this episode overdoes it slightly, as if The Bold Type is trying too hard to show its feminist credentials (and the reference to Emma Watson’s UN speech caters pretty exclusively to White Feminism). The actual storylines speak much louder than these shoutouts and feel more personal and meaningful.

Kat’s storyline, for example, dives deep into the realities of targeted online harassment. Hoping to propel Scarlet into the future, Kat suggests launching a virtual reality app, but during her research she learns that the VR industry is full of sexism. Kat uses the Scarlet Twitter account to call the “VR bros” out, and a Gamergate-like hellmouth opens up. First, the online attackers go after Scarlet, but it doesn’t take long before they target the woman behind the tweets, sending hate and rape threats to Kat’s personal Twitter account. While Sutton and Jane are immediately horrified, Kat remains relatively unfazed, ready to waltz into her presentation to the board about the VR app and crush it. But just as she’s about to head in, one of her trolls tweets a topless photo of her. She hesitates but still walks into the boardroom.

As she starts her presentation, Kat gradually unravels, the simple buzz of a cell phone and glance from a board member throwing her off. The anxiety builds until her mind’s racing with a cacophony of push notification alerts. The Bold Type shows how online harassment sinks its hooks into its targets. While the attacks happen online, their effects manifest in real life, impacting victims on personal and professional levels. Kat’s derailed from doing her job, and she runs out of the boardroom mid-presentation.

Jacqueline follows, and Kat shows her the tweets. Jacqueline understands immediately and tells her to take some time. The harassment campaign doesn’t slow down, and eventually, Kat is doxxed, her privacy entirely violated and personal safety threatened by a bunch of angry, misogynist, anonymous trolls. Kat meets with Jacqueline again, and she’s ready with another supportive, affirming pep talk.

One of the most refreshing aspects of The Bold Type so far has been the characterization of Jacqueline as a firm but approachable boss. As a huge fan of film and TV set in a magazine workplace, I’m used to (and love) characters like Wilhelmina Slater and Miranda Priestly. Jacqueline’s initial introduction to the show, that slow pan from the sharp tips of her red heels, suggested she would fall somewhere in that same category: not necessarily a full-scale villain but someone cold and wicked for the protagonist to run up against. But The Bold Type quickly veered in a different direction with Jacqueline, making her one of the warmest fictional fashion editors I’ve ever seen. Jacqueline is a genuine mentor to these young women, and that reflects the show’s determination to upend assumptions about women’s magazine culture. 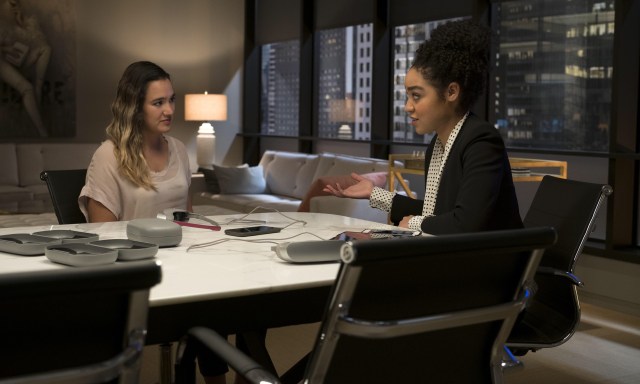 While Adena is out of sight in this episode, she certainly isn’t out of Kat’s mind. With everything she has going on in the wake of VRgate, Kat doesn’t spend as much of this episode asking herself (and everyone else) if she’s actually heterosexual as she has in the past two episodes. But Adena, who we last saw kissing another woman at her art show just as Kat was about to go up to her, has been in a similar position as Kat. So Kat shoots her a text asking how she dealt with all the death threats. She eventually responds, empathetic. The fact that two women of color are the characters facing online harassment on the show reflects the reality that women of color are more likely to be the targets of online abuse, but The Bold Type has yet to really explicitly engage with any conversations about race. In real life, women of color are also largely leading the fight against harassment.

Kat takes matters into her own hands, launching an awareness campaign where women read the rape threats and hateful tweets they receive out loud on camera. The work connects her with Emily Ramos, the owner of a small VR company who has been speaking out about the industry, too. Throughout the episode, Emily’s positive tweets pop up among the muck of trolls. While Jane and Sutton both offer their love to Kat, they don’t understand in the same way that Emily does. Being viciously attacked online can feel like an isolating experience, but movements like Kat’s video project bring women who have faced similar abuse together.

Kat has, by far, the most compelling arc in the episode. Sutton and Jane are both hard at work in pursuit of their dreams, struggling to balance their personal and professional lives. They both have moments in the episode where they choose their careers over the boring dudes they’re seeing. Jane cuts a date with Ryan from Pinstripe short to chase down a lead, and Sutton cancels a date with Richard at the Times Square Olive Garden (I know they’re trying to be discreet, but the Times Square Olive Garden is hell on earth) in order to work overtime for Oliver, the head of the fashion department. 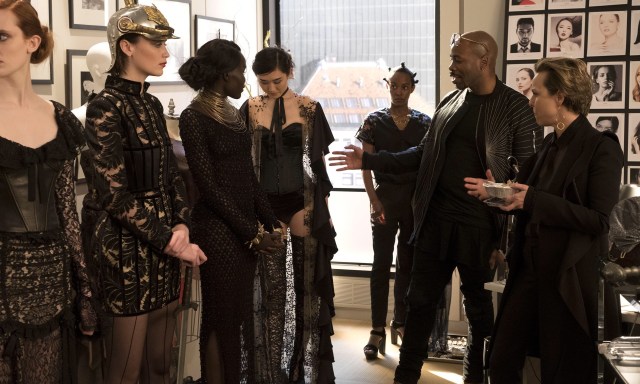 So far, I’m enjoying The Bold Type’s rapid pacing. Since the pilot, Sutton went from almost leaving her assistant job to work in ad sales, to realizing she doesn’t want to just settle for another job she doesn’t really want just because it’s comfortable, to now actively pursuing her dreams of working in fashion by throwing her hat in the ring for the assistant position that has just opened up in Oliver’s department. That’s an arc that some shows might spend several episodes working through, but The Bold Type reflects the fast pace of the magazine publishing world with its rapidfire storytelling. Sutton is stuck in a tedious cycle of getting endless green juices for Lauren (seriously, how many green juices does that woman consume in a day), and as her friend Alex points out, she has made herself too valuable.

That’s the downside of assistant jobs: They’re considered launching pads for one’s career, but they’re incredibly easy to get stuck in. We get to see Sutton succeed in the episode, first by styling a model for the Planned Parenthood fundraiser with a look that requires zero modification from Jacqueline (the ultimate stamp of approval), and then by receiving Lauren’s support. At first, Lauren doesn’t want Sutton working for Oliver, but that seems to have more to do with Sutton neglecting her duties as her assistant than her actually holding Sutton back, because she eventually agrees to give her a recommendation for the job opening in the fashion department. Women really come through for other women in the episode. 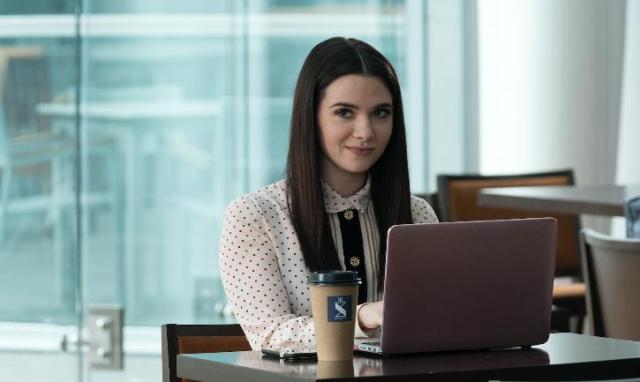 But The Bold Type also acknowledges that women shouldn’t blindly support other women under the guise of some all-encompassing, uncritical sense of solidarity. Jane begins the episode as a fan of Helen Wolfe, a congresswoman in town who Jane desperately wants to interview. At first, Jane is shut out of press access because Scarlet isn’t seen as a serious political publication (but also, hello, she didn’t have any official credentials on her, so I found it a bit hard to sympathize). She then frames a potential interview as a style piece, which gets her in the door. When she starts asking questions about Wolfe’s voting record when it comes to the environment, Wolfe abruptly shuts it down. Eventually, Jane pieces together that Wolfe intentionally wears horrendous outfits on days when she votes against environmental regulations in order to shift the conversation. Wolfe then pushes back against the sexism instead of ever addressing her lack of support for environmental issues. It’s devious, and it makes a good story, both for the show and for Jane, whose article once again ends up looking totally different from what she pitched.

On the side, Jane also deals with some relationship issues, actively pursuing something a little more than a kiss-and-run with Ryan from Pinstripe. When they’re having a drink at his apartment, he goes on some rant about how Jane shouldn’t feel boxed in after writing about sex last episode because everything in life goes back to sex. Sounds more like you’re defending your career than giving Jane a pep talk, Ryan from Pinstripe.

Later on, Jane finds an article in progress on his laptop with the headline Why Some Girls Fake It And Do We Even Care? Needless to say, she’s appalled that he’s writing a response to her own column without even talking to her about it. I’m not really sure what we’re supposed to think of Ryan, and the back-and-forth between him and Jane is unfortunately already a bit tiresome. He’s set up as an asshole, but a misunderstood asshole? He’s made just redeeming enough to not be completely deplorable. Despite the second half of that headline, his article ends up concluding that men should care about women faking orgasms. Wow, what a brave and honorable stance, Ryan from Pinstripe!

Jane’s attempts to carve out her own space in Scarlet magazine are much more captivating than her attempts to figure out Ryan from Pinstripe, but at least the show didn’t drag their tense flirtations out into some convoluted and tedious will-they/won’t-they situation. The Bold Type moves quickly, keeping the momentum going and the characters in constant motion. Even something as simple as a text from Adena to Kat that says she wants to talk to her in person thrills. But it’s telling that their text exchange has more chemistry than Ryan and Jane ever have.

Kayla has written 242 articles for us.