This article is about a medication and should not be used in place of consultation with your healthcare provider. We have no vested financial interest in Paragard, Mirena or Skyla.

Intrauterine Devices, aka IUDs, are all the rage these days for cis women in need of birth control. Many queer cis women, trans men  or genderqueer folks might be interested in getting an IUD, either for contraceptive purposes or to take advantage of side effects, but often have questions that they are uncomfortable asking their doctor. Sometimes there are questions that just don’t get answered in the onslaught of purple and teal pamphlets and commercials featuring women frolicking through flower-filled meadows. Today, we will try to answer them.

So what is an IUD exactly?

An IUD is a paperclip-sized T-shaped polyethylene (plastic) rod attached to two monofilament strings that is inserted inside the uterus. IUDs offer the best possible protection against unwanted pregnancy (up to 99.8% effective; better than the pill, patch, ring, shot or condoms) without having to remember to refill prescriptions, take pills or go in for shots. An IUD is left inside the uterus to prevent pregnancy for up to 3-12 years, and as such loads of folks use IUDs for contraceptive purposes.

What are the different types of IUDs?

Why would someone who doesn’t have sex involving an ejaculating penis want an IUD if they don’t need it as a contraceptive?

While there are not really any non-contraceptive reasons to get a copper IUD (more on the copper IUD later), there are lots of reasons you might want to get a hormonal IUD! Hormonal IUDs lead to light, shorter periods. A third of women will have lighter periods immediately and 70% will have no period at all by the end of two years. Did you read that? No periods. Period.

If you have particularly heavy, painful or PMS-filled periods, this can be a huge relief. This is particularly true if you have a medical condition affecting the way the lining of your uterus grows such as endometriosis, adenomyosis or endometrial hyperplasia.

Additionally, an IUD can be an option for a genderqueer individual or trans man who does not want to go on T, but finds getting a period to be dysphoric or triggering.

Finally, either the hormonal or copper IUD can be used by someone who, while not planning to have sex with cis men, is concerned about conception through sexual assault or reproductive coercion. 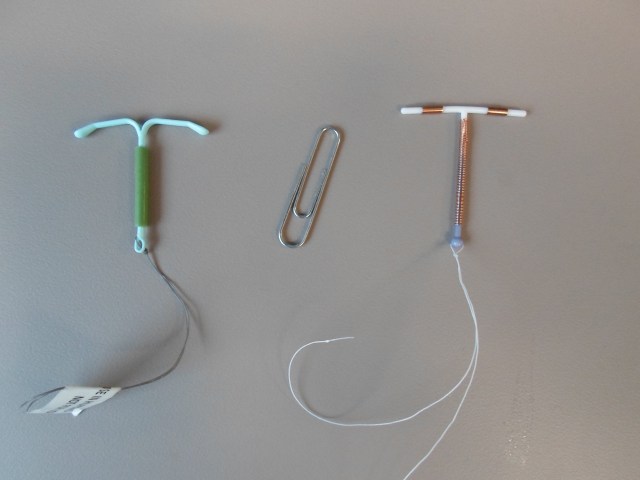 That thing in a the middle is a paper clip, not an IUD. (source)

What do the different types of IUDs do to my body? Tell me about the fancy science!

The body of the hormonal IUD is coated with a thin membrane that releases a regulated dose of a progestin called levonorgestrel. Progestin is just a fancy name for a synthetic compound similar to your body’s natural hormone progesterone. Levonorgestrel thickens the cervical mucous, suppresses the endometrium (uterine lining), inhibits sperm’s survival and ability to penetrate the egg and occasionally inhibits ovulation.

The IUD hormones are primarily local as opposed to systemic like in some other forms of birth control. For comparison, the Mirena IUD releases 20 micrograms of levonorgestrel per day, while OCPs (oral contraceptive pills) contain 150 micrograms per day. Since the IUD is working right there at the uterus, it doesn’t need to pump out as much hormone.

Importantly, the hormonal IUD does not contain estrogen, a hormone contained in oral contraceptive pills (OCPs). This is important because it means that the IUD does not carry the same risk of blood clots in smokers over 35 that OCPs do.

And the Paragard is… a piece of copper in my uterus?

Okay, now tell me about the scary stuff!

Like all medications the different IUDs come with side effects. This is why you should talk at length with your heath care provider if you’re considering getting one.

Here’s a list of potential side effects I stole directly from Planned Parenthood, because I trust them:

The pain on insertion thing is serious and you should probably take the day off work if you can and have someone pick you up from our doctor’s office. You can also talk to your provider about taking medicine like ibuprofen before insertion to help with pain.

Serious problems are rare and basically boil down to expulsion, infection and perforation. Expulsion is the IUD getting pushed out of the uterus through the cervix. This is more likely to happen if you’ve never had a baby or if you get an IUD put in directly after giving birth or having an abortion. Infection is most likely to happen right around the time when you first get the IUD inserted and is caused by bacteria being pushed into the uterus where it doesn’t belong. Make sure your health care provider knows that even though you’re queer, you also need to be screened for vaginal infections before having the IUD inserted just like straight cis women. Finally, insertion of the IUD confers a risk of perforating the uterus during placement. This sounds way scarier and more painful than it actually is, and usually your provider will notice and fix this right away.

Can my partner feel the IUD when she fingers me? What about if we’re grinding?

Your partner will not feel the IUD inside your vagina, whether it is with a finger, a fist, a penis or any other body part. The IUD is inside your uterus, which is separated from the vagina by the cervix. The cervix is like the door between the uterus and the vagina and it just opens a tiny bit normally to let out blood and cervix.

This can be confusing, so let’s look at a picture: 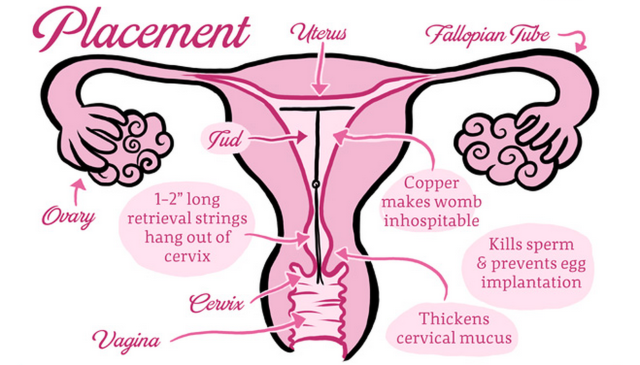 As you can see, the strings travel from the IUD through the cervix and remain at the very back of the vagina. Because of this, your partner may feel the strings leading to the IUD.  That being said, the vagina is typically 6 inches long and the cervix is at the very end of it. If you’re curious about what the strings coming out the cervix actually looks like, you can check this out at TheBeautifulCervix.com; a website dedicated to pictures of cervixes. A 2014 study suggested that while most partners will feel the strings, less than 7% of partners were actually bothered by the strings.

You should tell your partner that if she feels the strings, do not pull on them! That could pull your IUD out and be extremely painful. If the strings are really bugging you or your partner, the strings might not be the right length. They should be long enough to curl behind the cervix without flopping about too much. If they’re too long,  you can have your doctor trim them shorter. Finally, the strings themselves should soften up over time.

What about a tampon? Can I use a menstrual cup?

A recent study on IUD usage found that there was no difference in IUD expulsion rates in folks who used menstrual cups, tampons or pads. A menstrual cup generally sits low in the vaginal canal, and the cervix with the IUD strings dangling out is at the top of the canal. 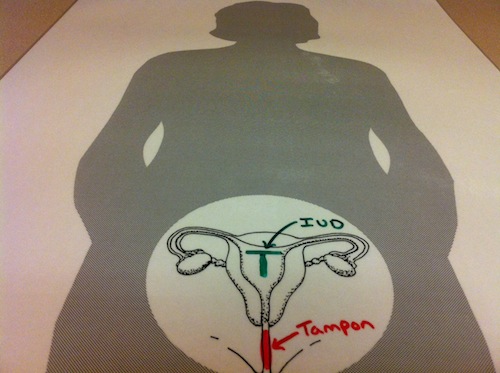 With that in mind, the two shouldn’t interfere too much. That being said, you should try to be aware of your IUD strings and be sure to break the suction seal at the lip of the menstrual cup when removing. If you’re still stressing out, I suggest checking out Diva Cup’s statement on this issue.

An IUD must be placed by a doctor, and in order to do so she will have to use a speculum. This can be very uncomfortable for anyone, but it can be particularly hard if you have not had much vaginal penetration in the past or many previous pelvic exams. Pelvic exams can be downright traumatizing for folks with significant body dysphoria if not performed with a great deal of care. You should inform your healthcare provider of your history so that she uses the smallest possible speculum for your exam. If your provider does not seem sensitive to your needs, choose another provider: you have a right to sensitive and conscientious care.

If you have any lingering questions or concerns, I firmly suggest investigating the Reproductive Health Access Project’s IUD fact sheet, Bedsider.org, or, as always, Planned Parenthood.