Well, some of the older lesbians (in urban centers) I know were in the thick of the gay liberation movement and can’t understand why the younger ones – and the ones in less urban areas – seem to be hell bent on “assimilating” and “becoming ordinary.” Liberation is about freedom, they say. I always respond that the institution of marriage is yet another space that should be an option for lesbians, and freedom is all about increasing options for all, even if some of the options may seem a bit un-queer to those who associate “queer” with “radical.” Liberationists can simply opt out if such an option exists, you know.

Liberation is about freedom, they say. I always respond that the institution of marriage is yet another space that should be an option for lesbians, and freedom is all about increasing options for all, even if some of the options may seem a bit un-queer to those who associate “queer” with “radical.”

It is interesting to note that – if you go one generation back from the liberationists – the original lesbian rights organization was the pre-Stonewall Daughters of Bilitis, which was founded in the 1950s by Del Martin and Phyllis Lyon, and their original goal was to convince society that lesbians weren’t weird of immoral or diseased – but they were just like everyone else in society. Gay normalization wasn’t just “made up” in the late 1990s and 2000 you know. Know your history! Martin and Lyon were able to get legally married in California this past year before Martin passed away, and if you didn’t cry or feel a sense of vindication when you saw the ceremony, you’re a cylon, and not one of those human looking ones that can feel – you’re one of those robot-looking centurions and you suck.

Also, I derive a lot of amusement from some millennials who seem to place a premium on arguing about gender labels ad nauseam and then screaming at you when you take a bit of time to catch on or if you have a sneaking suspicion that such esoteric nitpicking is just a form of intellectualizing “ME ME ME ME ME!” In fact, a really fun game to play is “create a non-existent gender label” – it’s similar to a game you can play with hipsters called “create a non-existent indie band,” in which you approach a hipster and ask if he is a fan of [non-existent indie band]. He will either save face by nodding as if the band exists or he will swallow nervously and say that he has never heard of the band, upon which you give him a look of profound disappointment, and he will feel like crawling into the nearest hole to comfort himself by playing obscure French emo on his iPod. 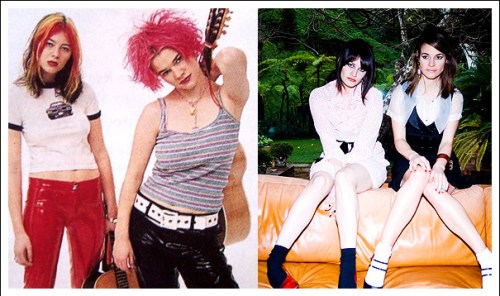 To play “create a non-existent gender label” you approach a label-obsessed queer (“LOQ”) and eventually, the issue of what you identify as will come up. At this point you must proudly announce that you identify as [non-existent gender label]. LOQ will either take you seriously or be ashamed that there is a gender label in existence that she was unaware of. Many chances for playing both of these games can be found in Brooklyn, the borough of “being overly competitive at things that don’t matter.”

Yes, there is, but it’s not laced with the animosity Harris describes amongst the gay male community. (Sidenote: I’m unsure why Harris wants to criticize young gays who are politically active. If you’re out there with a sign, um, bravah, there’s really no need for anyone to look at you and think, “ignorance.” If we’ve made activism “cool,” then I think we really have won.)

True enough — although usually I feel gratitude, support and enthusiasm from lesbians of all ages, every now and then I have a conversation with an elder Lesbian who talks to me like I’m a character on The L Word or finds my current objectives naive, which is strange because I have such genuine admiration for pretty much every single lesbian older than me. They always seem shocked that I know as much as I do about the women’s lib movement or lesbian herstory. In these conversations there are things I don’t mention, e.g., bisexuality.

That being said, It’s not entirely unfair to perceive the young’uns (myself included) as Lindsay Lohanized web-enabled Dinah-Shored easy-breezy glam lesbians who don’t appreciate what their elders fought for or to think younger gens take our current freedoms for granted.

But do I think every lesbian is obligated to research lesbian history, as I have? Nope. I think that’s the responsibility of our schools. I’m not comparing our struggle to the struggle of African-Americans in this country, but you’d be hard-pressed to find an American completely unaware of slavery, the trials of the civil rights movement or the hate crimes carried out by KKK. And it’s not just that we’re left out of history lessons, we’re literally censored out of school libraries.

So, aside from dropping that my Mom’s a ‘mo (though I really can’t attribute any of my lezducation to her, having shipped out a few months after she came out when I was 15), the best way to cross this hesitant divide is to show my pebbles of self-education and my willingness & desire to know more; I’m prepared to discuss Virginia & Vita just as I am to dish on LiLo & SamRo.  (YEAH I JUST SAID THAT!)

I know more than a lot of my peers and I defo don’t know enough. When women my age say they aren’t feminists I want to hit them on the forehead with a sledgehammer, like how can you not know what that word means.

The primary generation gap I think is the internet – it has become INFINITELY easier to find other lesbos than it was even five or ten years ago when it was entirely possible to spend your life not knowing (that you know) anyone else like you.

But do I think everyone is responsible to research lesbian history? Nope. I think that’s the responsibility of our schools. I’m not comparing our struggle to the struggle of African-Americans in this country, but you’d be hard-pressed to find an American completely unaware of slavery, the trials of the civil rights movement or the KKK. And it’s not just that we’re left out of history lessons, we’re literally censored out of school libraries.

Many women (and this matters to all women, because this is about our ability to tell stories and be visible independent of our relationships to men) don’t know there’s even more than one ‘wave’ of feminism or don’t realize that Ellen’s coming out wasn’t well-received.

On top of that, as Harris points out, the generational divide is something usually reckoned with, initially, at home. We are supposed to fight with our parents on these issues. But because the homos don’t reproduce quite as efficiently as the hets nor is sexuality necessarily passed on, we don’t have the opportunity to work out political & cultural divides within various minority populations with our parents, it can only happen with our peers. With lesbians more down to date older women than anyone else in the history of all time, many of us are educated by our girlfriends rather than by our mothers or our teachers. 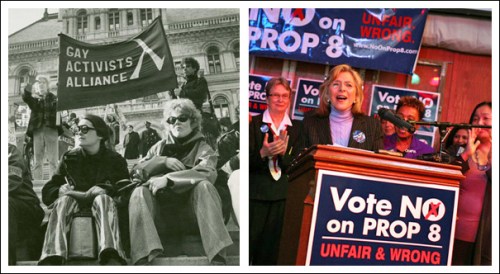 With so much of our history hidden or hard to find, it’s really hard for anyone to gauge the difference between stuff we don’t know and stuff that doesn’t exist.

So I think this goes for the gay men targeted in this article as it does for lesbians—don’t get angry at the younger kids for not knowing anything. Get angry at our educational system & at the media & the press for censoring and ignoring our HERSTORY!

Mark Harris says that the elder generations think we’re not angry enough, so I say let’s all be angry together and storm the Wasilla Public Library. Omg I can’t stop thinking about S-Pale today.

Oh and BTW! THANK YOU! (Why is my answer always the most confused and discombobulated of all the answers? ssjgljdsgi)