When I was a poor kid growing up in the foothills of the north Georgia mountains, one of my favorite days of every year was the afternoon in late September when the mailman dropped off the Sears Christmas Wish Book. My sister and I never knew when it was coming, just that it was coming, and as soon as it arrived, we holed ourselves up in the attic on our lime green beanbags and combed through the pages of the Wish Book like we were looking at a royal people’s yearbook.

Who were these human beings who could afford pajamas that matched their robes that matched their slippers that they wore on Christmas morning while sitting in front of a fire in their mansion with a golden retriever and a cup of coffee, smiling as they waited their turn to open up what was surely a box of gold bars and uncut diamonds? We did not know, but we wanted to be them.

It wasn’t until much later in life that I realized the Sears Christmas Wish Book was also the first publication to give us the gift of women standing around in their underwear exchanging presents and longing looks with each other. Eat your heart out, Victoria’s Secret; this thing happened in 1942: 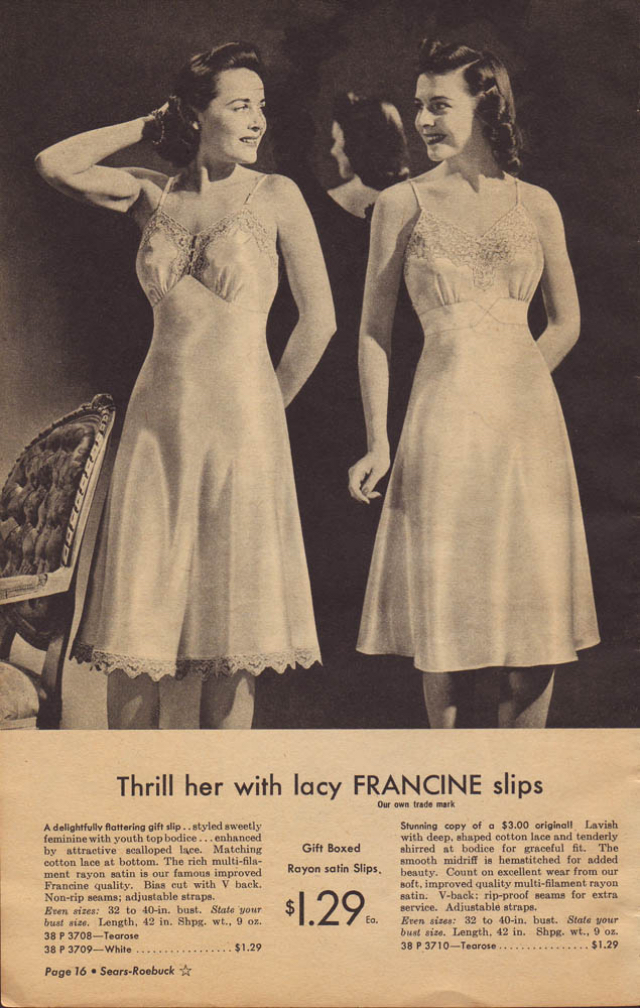 The only thing you would look sexier in is an scissoring sweatshirt, doll.

And so when I was home visiting my family a couple of weeks ago, I dug out the old Wish Books my grandma keeps around and decided to curate the 50 best photos of lesbian subtext Sears gifted us with over the years. The Wish Book may be gone, but the accidental lesbianism will never be forgotten.

Lesbian Twinsies Syndrome? No, of course not. Our skirts are completely different colors.

“Is that Don Draper falling out of his office window?” “God, I hope so.”

Sue Ellen, every girl over twenty-five should have a cucumber in the house.

Do you want to go on a magic carpet ride after this, or nah?

I pant so much when we’re together, it feels like I’m bursting at the seams.

I bought you some batteries, but you won’t need them.

Is that a hickey? I thought you said you didn’t even see Elaine when you did the JC Penny shoot!

Here’s hoping this one-handed back massage turns into a wild night of finger-banging.

The Ghost of Tegan Past.

Hahaha! Popcorn fights are so great! Seven minutes in heaven next, though, guys? Right? Guys, right?

Nothing says “lesbian” like a set of four plaid rompers.

Audrey, the rightward slant of your hip indicates a romantic nature. A heart that yearns.

I love you enough to treat you like a sex object even though you’re dressed like a toilet paper commercial.

I can make you come before Santa Claus does.

Crimpers may not go down in history, but I’ll go down on you.

One way to present yourself as a gold star.

Vanilla Ice stole my haircut *and* the baseline for Under Pressure.

Thank you for the pocket rocket, honey; it’s so discreet tucked away in these curtains I’m wearing as clothes.

All I want for Christmas is to do some sexy Anne and Diana cosplay with you.

I mean, it’s three sizes too big for you but at least you’re not dressed like a Top Chef Reynold’s Wrap challenge.

I just think Hitchcock could do a lot more with queer subtext than inverting classic Oedipal themes.

The South of Nowhere complete DVD collection! Thank you!

Wouldn’t it be so cool if that girl from Flashdance played a lesbian TV character one day.

“OMG, I’m gay?” Thank you, Courtney. No one’s ever gotten me an Autostraddle ‘zine for Christmas!

Guys, no. For real. I think A’s outside.

The Big Book of Lesbian Horse Stories is my all-time favorite holiday read.

Charlotte Lucas is so gay for Elizabeth Bennet I can’t even stand it.

I brought the Liquor in the (_____) flasks, Christy! You were supposed to bring the cups!

I actually do think Laneia should have put eggnogg in her coffee.

I can’t wait until after school to get you out of that vest you made out of your grandma’s couch.

Come on! Everyone should try a sex swing at least once!

Honestly, if Tatiana Maslany gets snubbed for an Emmy one more time, I will set Hollywood on fire.

True story: I asked for these pajamas every damn year. – Heather

My fingernail coding does not match my hair coding, you’re right.

Yeah, I think an Olivia Cruise sounds like fun. I heard Ellen’s mom goes on them sometimes.

I’d Instagram you without a filter, is how pretty you are.

Yes, these jackets are very warm, but that’s not what I meant when I said you’re going to get a couple of inches.

“Anyway, this is what I look like standing around in my silk nightgown.” “Yeah. Yeah, me too.”

“Harry, can you skin Malfoy’s shrivlefig?” You’re right, there is a lot of homoeroticism in these books.

Bringing urge to merge realness to 1972.

No, I’ve never even heard of Karmy fan fiction. Why do you ask?

So those are your tits.

Baby, it’s could outside. Of course I’ll settle for a mittenjob.