HB2 is Unconstitutional, So What Happens Next? 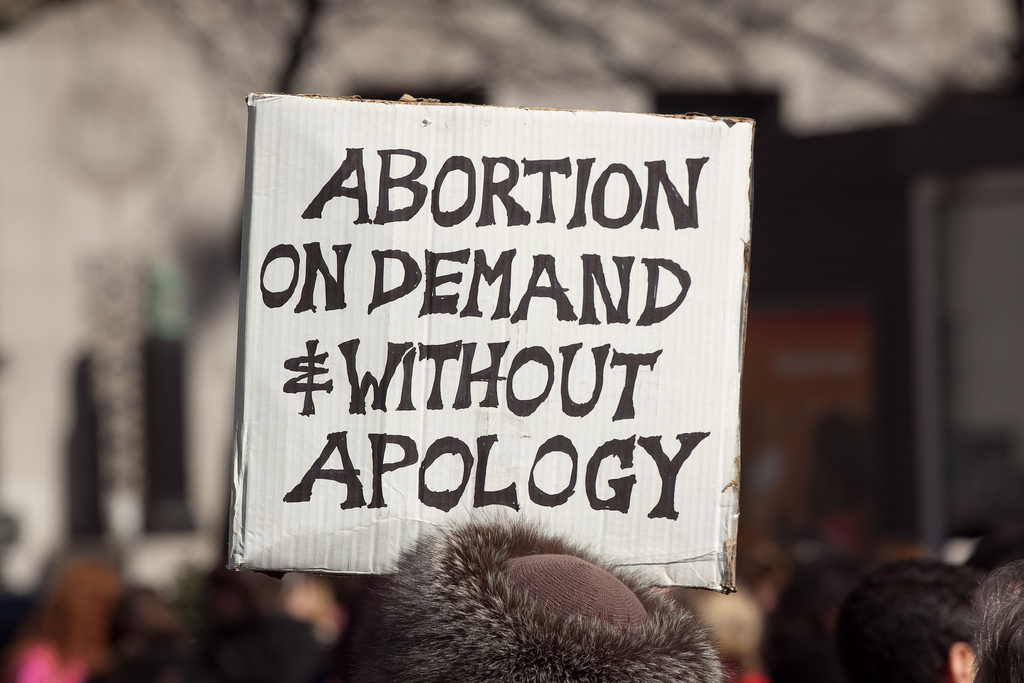 + In a 5-3 decision, the Supreme Court reversed the Fifth Circuit court’s decision in Whole Woman’s Health vs. Hellerstedt, ruling that Texas’s abortion bill HB2 is unconstitutional. SCOTUS overturned restrictions passed by HB2 in 2013 that required all Texas facilities performing abortions to meet hospital-like standards and required doctors to have admitting privileges at a hospital within 30 miles of an abortion clinic. This ruling allows for the 19 abortion facilities currently operating in Texas — of the 40 that were previously opened before HB2 passed— to remain open. If the court hadn’t struck down the hospital like standards as a requirement, only 10 abortion clinics would’ve been left to serve the massive state that is home to 5.4 million women of reproductive age, according to the Texas Tribune. 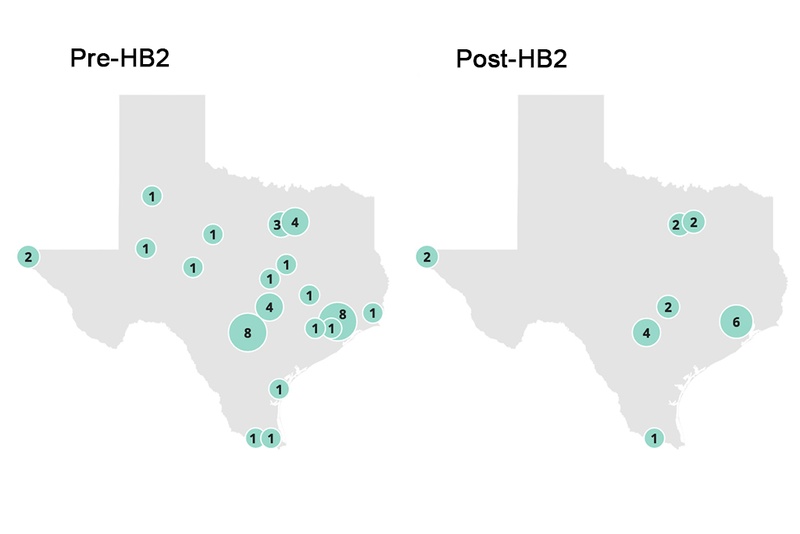 “We have found nothing in Texas’ record evidence that shows that, compared to prior law (which required a “working arrangement” with a doctor with admitting privileges), the new law advanced Texas’ legitimate interest in protecting women’s health,” Justice Stephen Breyer wrote.

There were more than 40 abortion clinics open in Texas when Republican lawmakers began pushing for new restrictions. When the restrictions became law in 2013, clinics who couldn’t meet the new standards starting closing and by the time the Supreme Court took up the case, the number of clinics were halved. Now that the high court has found HB2 unconstitutional, it’s going to take lots of time and money for those abortion clinics to reopen.

In the three years since Gov. Rick Perry signed HB 2, many of the shuttered clinics have sold their buildings or let go of their leases. Some had to surrender their abortion facility licenses to the state and will need to apply for a new one. They will also need to rehire staff and raise funds to acquire new medicine and equipment.

“It will take a while to rebuild the care infrastructure that used to be serving people across the state,” Hagstrom Miller said.

Some clinics may never reopen, ACLU Legal and Policy Director Rebecca Robertson said at a press conference Monday at ChoiceWorks, a former Whole Woman’s Health clinic that was forced to close in the wake of HB 2.

“This law was litigated for three years, and in that time, we saw a lot of damage,” she said. “Some of those clinics are likely not coming back. It sometimes takes years to rebuild access that we had before.”

The great thing about HB2 being struck down is that it impacts restrictive abortion bills in other states. SCOTUS found Texas’ TRAP (Targeted Regulation of Abortion Providers) laws as “unnecessary health regulations” that pose an “undue burden” on women’s right to abortion, which led to them also shutting down restrictions in Mississippi and Wisconsin with similar laws.

Although this is a great win for people in Texas and the US who can get pregnant, it’s also important to note there still a ton more abortion restrictions out there that prevent people from safely accessing abortion like mandatory waiting periods, laws requiring clinics to meet different surgical standards, 20-week abortion bans, etc. Unfortunately, there’s still so much work to be done and a long fight ahead.

+ At least 36 people died and more than 140 people are injured after someone opened fire and set off a suicide bomb at Istanbul’s Ataturk International Airport. Istanbul Governor Vasip Sahin gave an update on the death toll and says officials are looking into the possibility that there were three separate attacks at the airport. This is a developing news story so check back here for updates.

+ I’m a person who needed an explainer to explain Brexit. So if you’re on that boat, you can learn all about it here. If you have feelings about Brexit, you can talk about it with other straddlers here.

+ Here’s John Oliver scolding his countrymen about the vote and also warning Americans that this could happen if Trump gets elected.

+ A grand jury in Collin County, Texas decided to not indict Eric Casebolt, the former McKinney police officer who was caught on video throwing a black teenage girl to the ground while responding to a call about some kids at a community pool. Casebolt resigned shortly after the incident happened last summer but will not be charged with any criminal charges.

+ A group of 50 Islamic clerics in Pakistan declared that trans people are allowed to marry under Islamic law. They also declared trans individuals have full rights to Muslim burial ceremonies and Islamic inheritance law.

+ The Supreme Court declined to hear a case about a pharmacy wanting to turn away women looking for emergency contraception because it would be a violation of the owner’s religious beliefs.

+ Outraged by Brock Turner’s lenient sentencing for raping an unconscious woman, California lawmakers introduced legislation that would strengthen sexual assault laws. One would mandate prison sentences for sexual assaults of unconscious victims and others hope to expand the definition of rape to include all types of penetration.

+ The Department of Justice is making their employees take a new implicit bias training just like they’re making police officers in major cities to take. The department announced that FBI and Drug Enforcement Administration (DEA) agents, U.S. Marshals (USMS), U.S. attorneys, and agents with the Bureau of Alcohol, Tobacco, Firearms and Explosives (ATF) will need to take the training.

On the Pulse Shooting

+ Officials in Orlando released hundreds of documents like fire records, police records, text messages sent from public officials’ phones, all related to the Pulse shooting. Some of the records show what unfolded the night of the shooting through 911 calls. Police dispatchers got the first call at 2:02 a.m. and continued receiving multiple calls from the shooting. One dispatcher heard up to 30 shots while they were on the phone with a caller. The city didn’t release recordings of the calls or any video from the club or from responding officers’ body cameras. The records show that Fire Marshal Tammy Hughes and Fire Chief Roderick Williams discussed if there was a coke machine blocking one of the fire exits and there was some confusion on Pulse’s past fire inspections. Pulse says none of the six exits were blocked the night of the shooting.

+ Although many witnesses have come forward saying they’ve seen Manteen at Pulse many times before, have dated him or messaged with him on gay dating apps, the FBI says they have found no evidence to support these claims. The LA Times reports:

“So far, they have found no photographs, no text messages, no smartphone apps, no gay pornography and no cell-tower location data to suggest that Mateen — who was twice married to women and had a young son — conducted a secret gay life, the officials said.’

+ A father of one of the deceased in the Orlando shooting refused to claim his son’s body because he was gay. The victim’s body was later released to Orlando-based family and was buried.

+ A group of Hawaii residents flew to Orlando to honor the 49 victims of the shooting with a mile-long “Lei of Aloha,” which included 49 cowrie shells inscribed with each victim’s name. 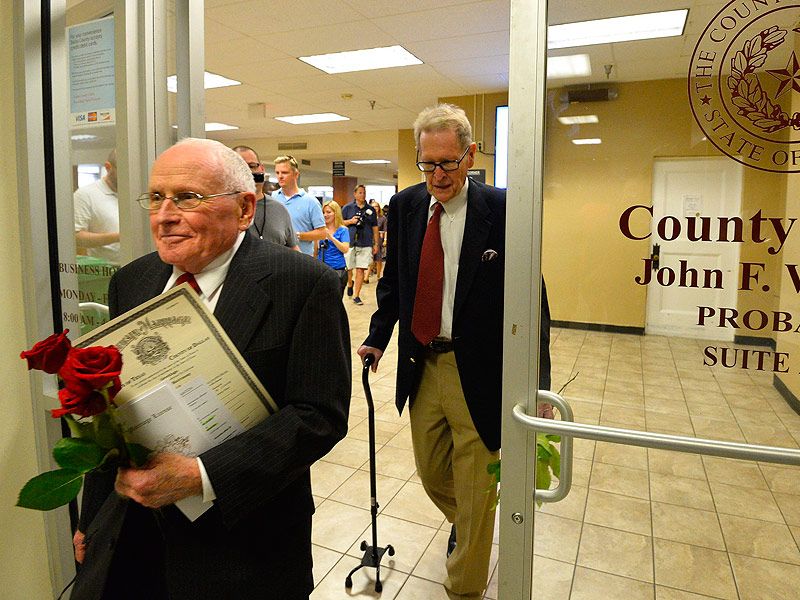 + Jack Evans, who waited 54 years to marry his partner George Harris, passed away on Thursday in Dallas. He was 86. Evans and Harris were the first same-sex couple to marry in Dallas County on June 26, 2015 right after the Supreme Court’s landmark decision. ::broken heart emoji::

+ Legendary women’s basketball coach Pat Summitt passed away on Tuesday, after a five-year battle with early onset Alzheimer’s. She was 64. She coached the Lady Vols at Tennesse for 38 seasons as head coach and led the team to win 8 NCAA titles.

+ A new report from the Natural Resources Defense Council found that dangerous levels of lead has been found in water systems nationwide. Think Progress reports:

“Between 2013 and 2015, according to the NRDC’s analysis of Environmental Protection Agency’s (EPA) violation and enforcement records, more than 3.9 million people were served by a community water system that had lead levels in excess of the EPA action level of 15 parts per billion in at least 10 percent of homes that were tested. While the EPA has said that there is no safe level of lead, anything above 15 parts per billion is meant to spur remediation action to get rid of the health threat. This was found in 1,110 water systems last year.”

+ At least 5 people were stabbed in Sacramento when a white supremacist organization and counter protestors clashed in front of Sacramento’s Capitol building. A fight broke out between protestors affiliated with the Traditionalist Working Party, a white supremacist organization who had an event at the capitol, and 150 anarchists and counter protestors. You can find a bunch of footage from the event here.