Tegan and Sara have always been excellent at reaching into our chests and tugging at our queer heartstrings in an excruciatingly beautiful way. Their eighth full-length album, Love You To Death, out on June 3, branches out into new layers of emotional and musical depth, and stands up to their heart-wrenching standard.

It seems important to note up-front that I loved Heartthrob and it’s what really got me into Tegan and Sara. I’m entirely here for their pop era, and though I love their old stuff, too, I’m not pining for it. If Heartthrob represented a bold definitive splash into new musical territory, LY2D shows Tegan and Sara hitting their stride in creating music ready to find a home alongside today’s Top 40. LY2D is more refined than Heartthrob. The sound is cleaner and simpler, making room for honest and direct lyrics, some of which represent more mature and removed takes on their earlier angst, and some of which dissect the twins’ sibling relationship — a dynamic they’ve yet to deeply explore in their music. 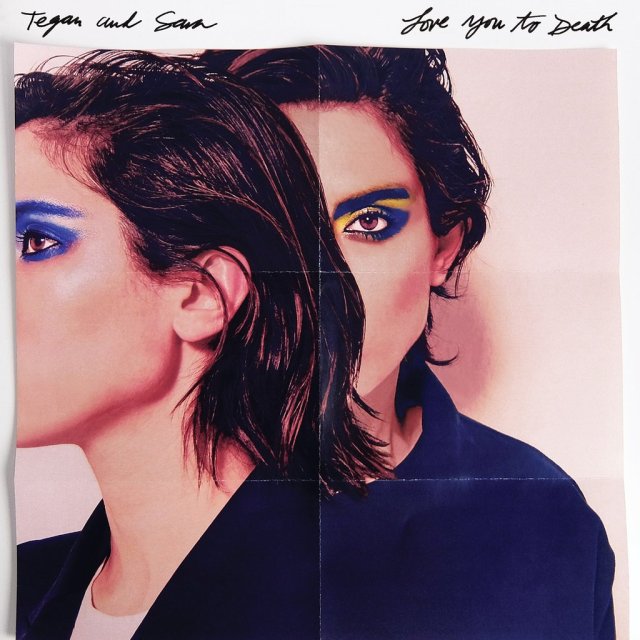 Lyrically, this is my favorite Tegan and Sara album yet. As a writer, I’m a hell of a lot more comfortable deconstructing their lyrics, and I’ll do that in a moment, but first, let me put my new music critic hat on for just a second. LY2D sounds great. The belabored social media lead-up to the album’s announcement and the somewhat kitschy name “Love You To Death” made me nervous that the album was going to lean too heavily on a shallow and gimmicky sugar-pop feel, but I’m happy to say that my expectations were far surpassed. Despite some overdone distorted background vocals here and there, the choruses are catchy and the verses drive the narrative of the album. Since the head-bopping highs are matched with interesting emotions, LY2D retains a depth that keeps it interesting beyond a few listens — it’s excellent driving music, especially for when you have an existential relationship question to think through. On LY2D, Tegan and Sara kept up the “soaring synths” of Heartthrob‘s electro-pop feel, though they also stripped down to a single piano on “100X.” The twins didn’t touch their guitars to record this album, and I don’t miss them.

OK. Now the for the lyrics: LY2D is Tegan and Sara’s most identifiably queer album yet. Despite having been out queer artists since they first arrived on the scene almost twenty years ago, they’ve often shied away from making their music explicitly queer, partly because of homophobia and sexism in the music industry, which they recently discussed at-length with Buzzfeed. This isn’t to say LY2D is “queers-only” — a lot of people all over the sexual orientation and gender spectrums are going to be able to relate to and enjoy these songs — but the themes are ones I see repeated in my life and my queer communities over and over. In LY2D, Tegan and Sara wrote to queer experience, and were able to trust their audience to buy in.

In many ways, LY2D is about the desire to be seen and understood, which caught me like a baseball bat to the gut more than once. The opening track, “That Girl,” begs, “So recognize me, so recognize me,” which will resonate for anyone who has gotten lost in a relationship, and asks “When did I become that girl?” The album continues, examining the struggle between trying to be the person you feel you are and trying to be the person who you think other people want you to be.

Tegan and Sara explore that tension in all kinds of relationships: In “Boyfriend,” which I think is their queerest song ever, they wrestle with the confusion of unspoken attraction in supposedly platonic relationships: “You call me up/like you would your best friend/You turn me on/like you would your boyfriend.” In “Faint of Heart,” they describe the disorienting frenzy of falling hard and fast for a person, even though the rational voice in the back of your head and all your friends are telling you the relationship seems inevitably doomed. They deconstruct the complexities of their identical twin sibling artist relationship in “White Knuckles” and “100X”: “Doubled like a couple we stood, stood out in the light/ …breaking each other like/ knuckles in a fight.” They vent about the frustrating erasure of queer love when it doesn’t conform to heteronormative standards in “B/W/U.” The album’s final song, “Hang on to the Night” answers the lingering question from “That Girl,” in an ’80s-esque ballad with soaring synths: “Hang on to yourself/no good will come from being untrue.” 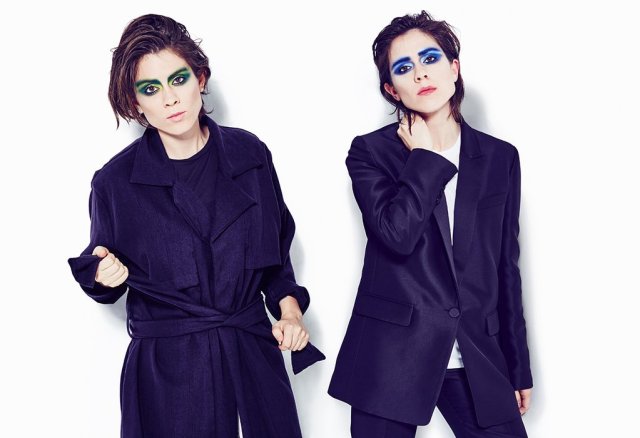 While the twins’ on-stage and public image has always featured their ability to collaborate alongside some entertaining on-stage teasing, behind the scenes, things haven’t always been so relaxed. In 2008, they even got in a physical fight while on tour with Neil Young. They spent several years living in different cities, in part to have space from each other between tours. Though the dust has largely settled as they’ve aged, in an interview with Time, Sara also discussed how part of the reason they’ve avoided writing about their sibling relationship in the past to was to keep people from making comments “borderline suggesting [they] were incestuous.” She continued, “writing a song like ‘100x,’ which everyone will think is about a romantic relationship, that would have made me so uncomfortable even five years ago. I would have been afraid people wouldn’t underestimate how truly intimate and like a marriage my relationship with Tegan is.” In LY2D, the Quins took a chance by offering up vulnerability about their relationship, and it pays off.

It’s amazing to see a queer artist comparing her relationship with her sister to a marriage. It’s amazing to see the intimacy of a non-romantic relationship examined and picked apart. As queer people, we are often critically aware of how complex and many-layered our relationships are, across the board. It takes hard work to maintain any partnership — whether it’s between lovers or friends or the person you shared a uterus with. Ending or shifting a relationship with a friend or family member can feel exactly as dramatic and difficult and painful as breaking up a romantic relationship, and we don’t usually get to see that reflected back at us in songs.

Tegan and Sara’s opening up about their sibling relationship adds a profoundness to LY2D that takes it from a collection of songs about various stages of romantic love, which would have been fun and relatable, to a deep and complex exploration about sharing any kind of intimacy, be it romantic or platonic or familial, which I felt in the deepest and rawest pieces of my heart.

Love You To Death is out today, June 3. Buy it HERE, through our affiliate link and support Autostraddle while you listen!