As a baby academiqueer, put the words “research” and “blog” together and I’ll instinctively follow it up with “nope.” The £15,000 that’s deposited into the British academic-industrial complex every year on my behalf already puts enough strain on my soul without doing readings for fun, y’know?

Sara Ahmed is an exception to this rule, though, because Sara Ahmed, a Professor in Race and Cultural Studies at Goldsmiths University, is an exception to all the rules. Her research blog Feminist Killjoys, named after her essay “Feminist Killjoys (And Other Willful Subjects)”, was launched last week and has brought to all of us thoughtful, fascinating works such as her contribution to “Judith Butler in Conversation” to reflections on “happy, smiling multiculturalism” prompted by cult hit Bend It Like Beckham. 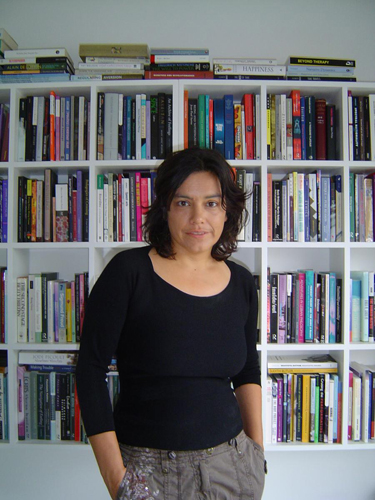 It is very, very rare that I come across academic writing that resonates with me personally, and this is what I find in Ahmed’s work. In “Feminist Killjoys (And Other Willful Subjects)”, she begins with a simple scenario that I expect most of us can relate to:

One way of telling my feminist story would be to begin with a table. Around the table, a family gathers. Always we are seated in the same place: my father one end, myself the other, my two sisters to one side, my mother to the other. Always we are seated this way, as if we are trying to secure more than our place. A childhood memory, yes. But it is also memory of an everyday experience in that quite literal sense of an experience that happened every day. An intense everyday: my father asking questions, my sisters and me answering them, my mother mostly silent. When does intensity become tension?

We begin with a table. Around this table, the family gathers, having polite conversations, where only certain things can be brought up. Someone says something you consider problematic. You are becoming tense; it is becoming tense. How hard to tell the difference between what is you and what is it! You respond, carefully, perhaps. You say why you think what they have said is problematic. You might be speaking quietly, but you are beginning to feel “wound up,” recognising with frustration that you are being wound up by someone who is winding you up. In speaking up or speaking out, you upset the situation. That you have described what was said by another as a problem means you have created a problem. You become the problem you create.

This leads into a refreshing, critical discourse of killjoys, feminist tables and “getting in the way.” This essay articulated plenty of thoughts I’d had at the back of my mind for years but couldn’t put words to and then much, much more than that — what I find most valuable is that her feminist, anti-racist and queer politics (all of them!) run strongly through all of her works. Her upcoming book, Living A Feminist Life, promises to engage with “sexism, whiteness, identity politics, privilege, lesbian feminism, feminist classics, feminist killjoys, willfulness, intersectionality, racism, and more.”

Take the example of racism. It can be willful even to name racism: as if the talk about divisions is what is divisive. Given that racism recedes from social consciousness, it appears as if the ones who “bring it up” are bringing it into existence. We learned that the very talk of racism is experienced as an intrusion from the figure of the angry black woman: as if it is her anger about racism that causes feminist estrangement. To recede is to go back or withdraw. To concede is to give way, to yield. People of color are often asked to concede to the recession of racism: we are asked to “give way” by letting it “go back.” Not only that: more than that. We are often asked to embody a commitment to diversity. We are asked to smile in their brochures. The smile of diversity is a way of not allowing racism to surface; it is a form of political recession.

Done with all of Feminist Killjoys? Have something to add? Ahmed is looking for contributions!

Now go forth and get to killing joy, y’all.