San Antonio finally joined Texas’s other major cities — Dallas/Fort Worth, Austin, Houston and even El Paso — to have a non-discrimination ordinance that includes sexual orientation and gender identity, after the city council voted 8-3 Thursday afternoon. All I have to say is: it’s about goddamn time San Antonio.

Don’t let the majority vote fool you into thinking this was a no-brainer vote (I mean, it really was an easy vote if you believe in humanity) because it wasn’t. The vote is a long-awaited victory for the  community in San Antonio.  Since 1998 LGBT San Antonians have made attempts to protect employees from discrimination based on sexual orientation. It wasn’t till 13 years later that these issues were addressed again. In 2011, the city passed domestic partner benefits for city employees but tabled the motion to discuss protecting LGBT members from discrimination. Then last May things actually picked up steam and the metaphorical wheels started moving toward equality; City Councilperson Diego Bernal filed a request to update the city’s nondiscrimination ordinance to include “sexual orientation and gender identity.” 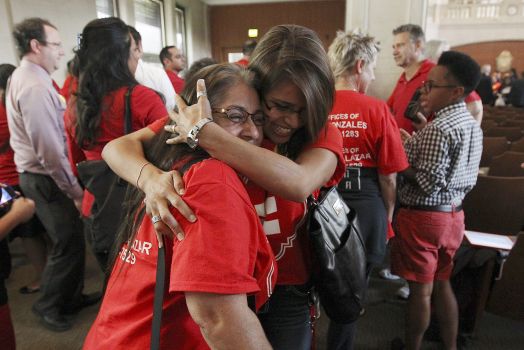 It’s a fairly simple concept, isn’t it? The ordinance serves to protect its citizens from discrimination based on race, color, religion, national origin, sex, age and handicap — so why not add sexual orientation and gender identity? Because it’s a violation of religious conservatives’ First Amendment rights, duh.

The conservative media heard about San Antonio’s proposed updates and voiced a range of delusional opinions like: the ordinance will prevent people who believe “homosexuality is a sin” from being hired, to penalizing Christian business owners to — my favorite— “imperiling free speech.” 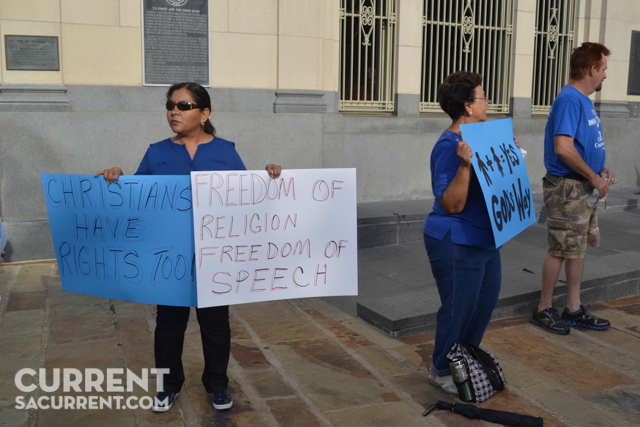 Aren’t they supposed to be the ones wearing red?

Then of course, Republican government officials including leading governor candidate Greg Abbott along with State Senator Ken Paxton, State Representative Dan Branch and Railroad Commissioner Barry Smitherman — who are all running for Attorney General next year — echoed the conservative media’s concerns and opposed the ordinance.

The cherry on top was the leaked secret audio recording of San Antonio councilperson Elisa Chan saying extremely homophoic and transphobic comments in a May 21 meeting published in the San Antonio Express-News. Honestly, the recording is so unbearably disgusting and heartbreaking to listen to because these ignorant people are responsible for governing the second largest city in Texas. Along with saying gays and lesbians shouldn’t adopt, Chan was recorded saying disparaging remarks of the trans* community, including, “I will say, ‘Strip down! What equipment do you have?’ I’m telling you. Crazy. We’re getting to crazy realm.” No m’am, you’re the crazy one for saying things like that and this:

“This is my philosophy, guys. Whatever you want to do in your bedroom is none of my business, but do not impose your view on other people, especially becoming policy … because personally, I think it’s just disgusting just to even think about. All the definitions. …” 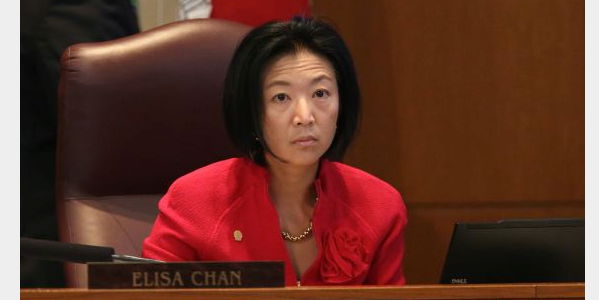 Ya, you said some terrible things. via veracitystew.com

A few days after the recording was made public, Chan did not apologize for her remarks and instead said that her staff meetings are “free speech zones” and she will “not change her own values or beliefs for political gain or survival …”

Needless to say, Chan was one of the three opposing votes cast today.

San Antonio is home to a majority of same-sex couples raising children in the nation. That’s twenty-two percent of same-sex couples in San Antonio have families to support, which makes this non-discrimination ordinance in the workplace that much more important to the livelihood of these parents and their children. It also sets a precedent for other Texas cities to update their own NDO and protect the rights of all Texans.

Passing this NDO should have been easy, since everyone should receive equal protection against discrimination by business owners and public officials. It’s surprising that it was met with so much opposition simply because it supposedly violates the morals and religious beliefs of others. The oppositions towards this ordinance were all great examples of why it needed to be passed. No the NDO does not violate your first amendment rights to believe what you want to believe; no you can not veil your bigotry, homophobia, transphobia as free speech; no you can not pretend that queers do not exist in this society.

This is a great victory for queer Texans, one that should not be the last. Hopefully, other cities, even the one I grew up in, can echo this NDO, if not at least to entertain the idea.