Previously on Supergirl, Lex stole Lena’s Non Nocere code to brainwash half the world and almost murdered the other half, Eve was in love with Lex but he was using her and she eventually broke free of his metaphorical spell and helped the SuperFriends instead, Alex sucked the god powers out of Lex but Kara got sucked into the phantom zone in the process, and Alex is dead-set on getting her baby sister home.

We open on a scene that is not unlike the beginning of Season 3 of Buffy, in that the Scoobies are fighting without their Slayer, trying out some new cheesy catchphrases, and also it’s a vampire they’re facing. 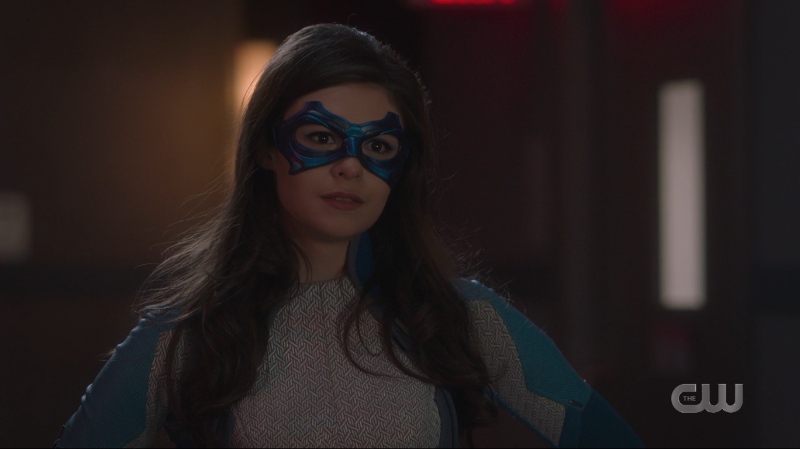 “Do you think Kara is off somewhere waiting tables and going by Anne?”

But as it turns out, it’s not a vampire at all, but an alien named Silas from the planet Transylvane; his species is the origin for the vampire myth. Which is a fun bit of lore that I rather enjoyed. He tells them that unlike his cryptid counterparts, he’s not actually a violent creature and in fact prefers robbing blood banks for his meals, but they don’t actually care all that much who, if anyone, he’s eaten lately. They’re there to get information about the Phantom Zone. 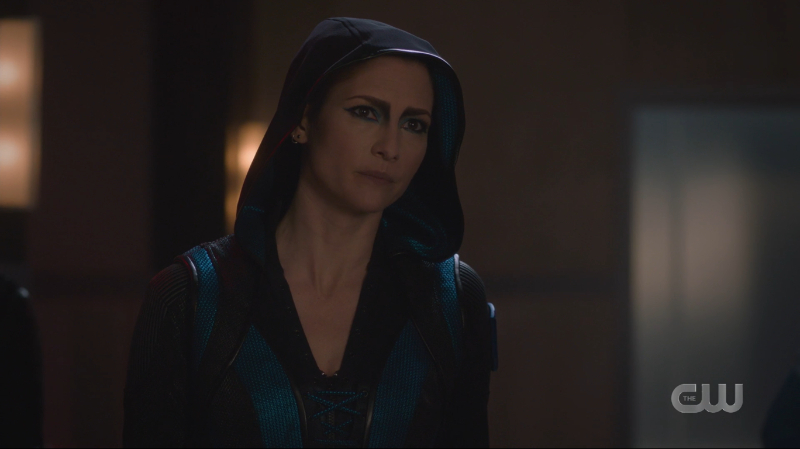 I like the rogue hood but I am always a little sad when the wee blue braid is covered up.

The SuperFriends take Silas back to the Tower, where he tells them that his husband once got sent there for a crime he didn’t commit. Silas tried to break him out but failed. He tells them that the phantoms feed on fear and sopranos who can hit a high E, until slowly but surely your nightmares become a reality and you lose your whole damn mind. Which is what happened to Silas’s husband. They beg him to help them save Supergirl from the same fate, and he looks uneasy but also sympathetic to their plight.

Before they go into the Land of Nightmares, Brainy wants to train their Girl of Dreams, since he thinks she can use her divining powers to find Kara once they’re on the same plane, and also because I imagine the psychic power clash could be potentially brutal. She agrees, but first she has to save face at her day job, since she’s the only one holding down the fort as far as their civilian identities go. 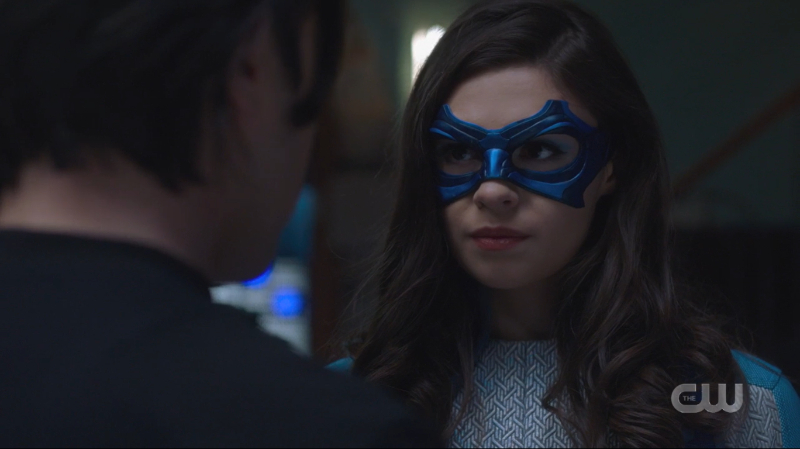 “But what if I run out of dream-themed puns, Brainy? WHAT THEN?”

When Nia gets to Catco, Andrea is telling her staff that she wants to be the leading news source on everything that’s going down about Lex Luthor right now. The world’s leading man just got cut down to size and she wants to be the first to report his next moves. Since Kara is still “with Cat Grant” working on a story that even though she didn’t sanction it Andrea is just chill with happening, Andrea appoints Nia as the new Kara, even though I’m not 100% sure she’s ever written anything for CatCo, but apparently this publication works on The Bold Type rules. It’s fine. Anyway, she sends Nia to cover Lex’s case, tells her to do whatever she has to in order to get the story, and that either Andrea will literally bail her out or Supergirl will metaphorically bail her out, so not to worry. She wants to make sure Lex’s villainy is broadcast far and wide, and she’ll do whatever she has to in the process. 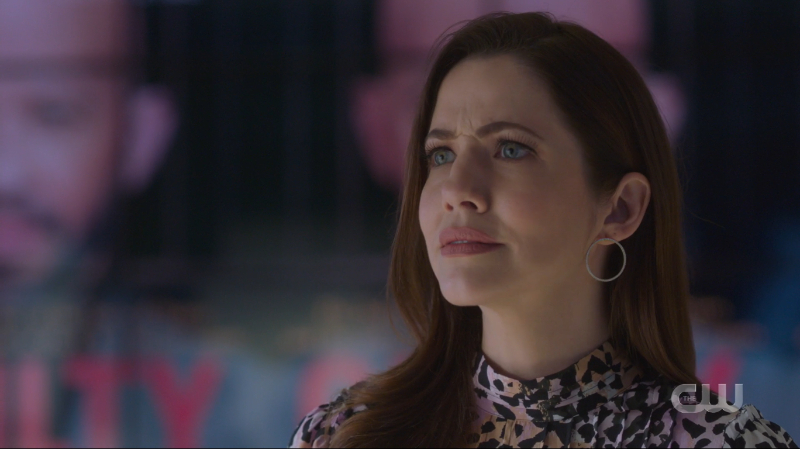 “I will shadow bamf into his apartment and slit his throat myself if I have to, but dry cleaning is expensive and I’m down to one business so if we could do it this way instead I’d appreciate it.”

Lillian goes to see her son in prison and asks him not to embarrass her by representing himself in trial, and to consider just pleading guilty and paying his dues, because Eve’s testimony is going to be damning and she doesn’t want him to tarnish the Luthor name any further. Lex is offended by the concept; his pride will not allow him to do something so pedestrian as be held accountable for his crimes, so he tells her he has every intention of walking out of the courtroom a free man.

Meanwhile in the Phantom Zone, Kara is having a bad time. Phantoms descend upon her, and at first it seems like she’s being taken into a nightmare, but then she wakes up in a cave. A shadowy figure accuses her of being a nightmare because he recognizes the symbol of the House of El on her chest, but when he turns around she realizes that standing before her is her father. 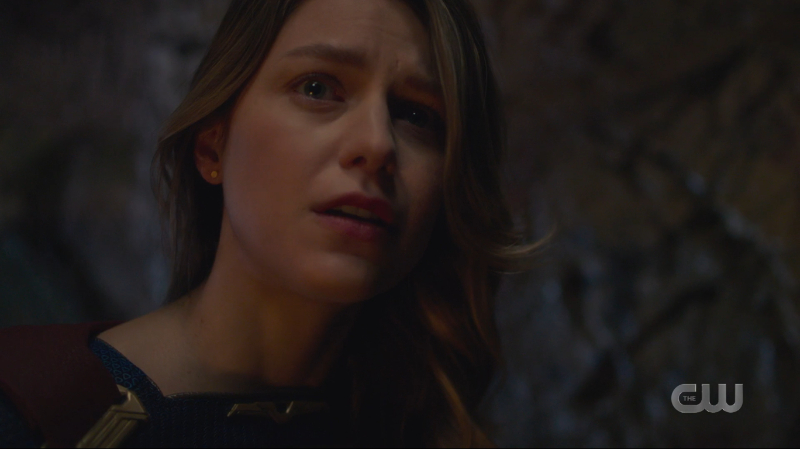 For some reason my brain translated this into a cartoony “Fahza?” and when I googled why I was disappointed in my monkey brain for retaining Austin Powers so subconsciously.

And it’s moments like this when I think things like, “Ooh I wonder if that vampire alien knows Supergirl’s father” that I remember why I love sci-fi so much.

Kara’s dad is surprised but relieved to learn that Kara and Alura survived, and he’s also grateful that probably when her pod got knocked off course, she was probably protected from the phantoms. But the truth is, she’s no stranger to reality-bending nightmares. Hers being that she was in the fortress of one of her enemies and everyone she ever loved was dead and there was nothing she could do about it. It was as visceral as a memory. And she’s not going through that again. 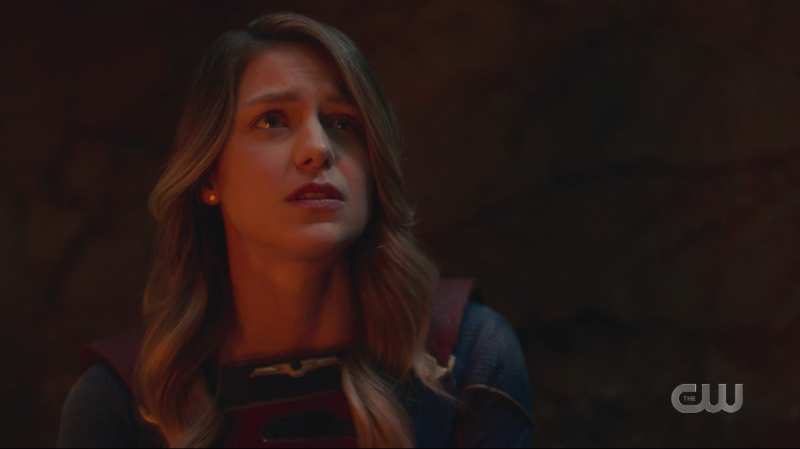 “Listen you might not be real but I’m hanging on by a thread here so I’m just going to roll with it, okay?”

Despite her father looking pretty resigned to his fate, Kara has already come up with a plan for escape attempt numero uno. Fort Raz is above them and there has to be a way for the phantoms to come and go and she wants to use it. Daddio says they have to stay put. They can’t provoke the phantoms. It might not be much as far as living but at least it’s surviving.

Next page: Back on Earth (though please don’t ask me which one)