Helloooooo, Superfriends! It has been a minute! Though honestly, not nearly as long as it’s felt, since time is broken. I was skimming my Supergirl recap for the Season Five finale before diving into this episode to refresh my memory of where we left off and I read a caption I wrote that said, “Or maybe she misses being fucking hugged,” and I was like “yikes that was aggressive wasn’t this episode before quarantine,” and no, no it was not. It was three months into quarantine, which is why I wanted someone to hug Lena so desperately.

Anyway, here we are, back again, for one final season of Supergirl. Let’s dive right in, shall we?

Previously on Supergirl, Brainy’s alter egos convinced him that the only way to defeat Leviathan was to isolate himself from his friends and work with Lex so that’s exactly what he did, Lex worked with Leviathan to take over the VR system Obsidian North and brainwash people, Lena and Kara fought about Lena’s Non Nocere procedure which was technically also brainwashing but with better intentions, and eventually Lena and Kara decided to work together to stop Lex.

Last we left Brainy he was trapped in the Leviathan HQ with poison air, and so still he lay dying. But Nia had a dream about him, so she arrives to help him. 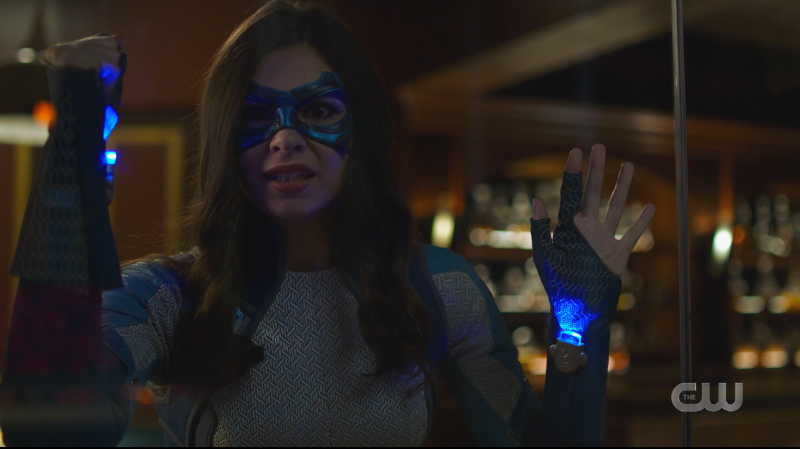 I felt this can’t-get-to-the-person-I-love-because-poison-air moment on a deep emotional level.

While Nia tries to find a way through the glass door into where he is, Brainy tries to say his goodbyes, explain why he was working with Lex, apologize for pushing her away. He even tells her he loves her. But Nia isn’t giving up that easily and astral projects into the room to try to find a way to help him.

Gemma the Leviathan God of Technology bursts in the room to fight them, but the Superfriends show up hot on her heels. They try to fight Gemma but since she’s made of nanobots, they can’t just punch her to death. Brainy and Alex use their supersmarts (and Alex’s magic glove) to find a way for Supergirl to put the anti-life code into the Leviathan computer, and Alex braves the poison air as long as she can to get the code to her sister. 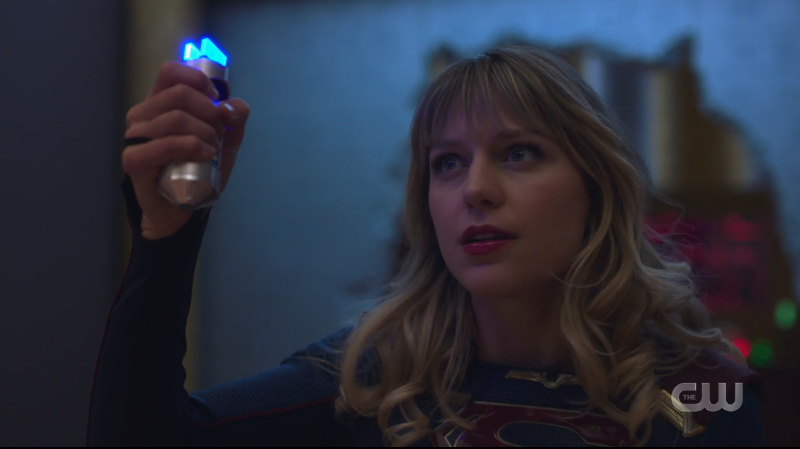 Gemma goes down, and we can only hope it sticks this time.

Unfortunately, the same can’t be said for Lex Luthor, who is revived by his mother Lillian and feeling stronger than ever. He has super strength, a super ego, and a super watch that can beam kryptonite lasers because of course he does. He says that aliens shouldn’t be earth’s saviors, that Luthors should, and thus he’s going to kill Supergirl and all her friends. Then, when he’s done with this earth, his plan is to fix the rest of the planets as if he didn’t have a front row seat to the last time someone tried to do that and it ended in CRISIS.

Lex tells his mother about the stupidly named “I love Lexi” code he put into as many people logged into Obsidian North as he could before it shut down, and he has satellites in place to kill everyone he didn’t infect. Lillian asks what about her and his sister, and he says there’s a Lillian Exception in the code, but that Lena is technically Team Super now so she’s on the hit list. Lillian and I both do not like that plan at all. 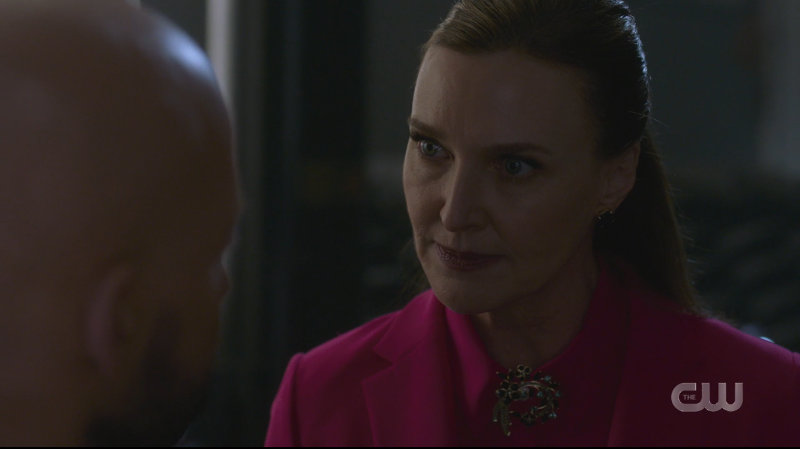 It always worries me when I agree with Lillian about something…

Lex’s argument is that Lena killed him first, to which I say, but did you DIE? But Lillian puts her foot down about this. Lena is safe or she’s out of here.

Speaking of Lena, she’s looking all businessy in the Tower, pressing the Supergirl button to get Kara to return to her. Supergirl does indeed show up with the rest of the team in tow, and Lena and Kelly fill them in on what they missed. For example, Eve and her mom are ready to go on record about what Lex did and who he really is. 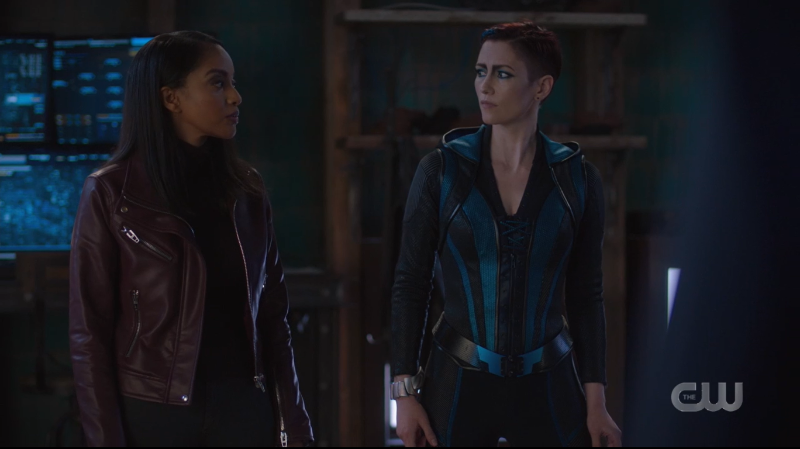 The return of Dansen!

Lena tells them about how Lex stole her codes for Non Nocere and rewired it to his own whims, and using stories Eve told them about an exploding mouse and her big beautiful brain, she has figured out Lex’s evil plot to kill everyone who is not blindly loyal to him. 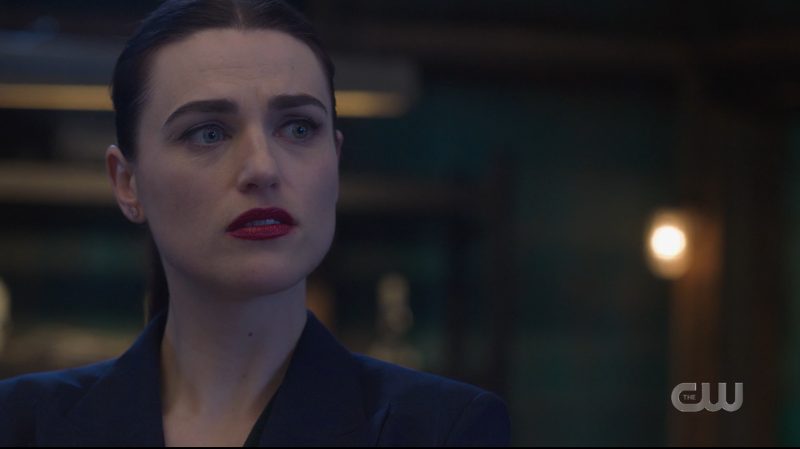 “Hey isn’t it nice to have the smartest person in National City on your side?”

As soon as Lena mentions the satellites, Nia gets a vision about Lex being some kind of awful anti-monitor/genie Jafar hybrid and destroying all the worlds. The problem they have now is that there are twelve satellites and they’d have to disarm them all at once and, as Kara points out, “Only four of us can fly.” Which I think is selling themselves a little short. I think maybe saying, “And there aren’t enough of us,” would have sufficed; four is a pretty high number of people who can fly in any given friend group. Even on a CW sci-fi show.

M’gann comes up with the idea for her and J’onn to do a Martian mind meld with the satellites to stop them all at once, and that seems as good an idea as they’ve got so Kara agrees to it.

Kara also asks Lena if she can reverse the Non Nocere code and un-brainwash the people Lex targeted, and Lena looks genuinely surprised. It makes you wonder how long she paced back and forth across the Tower floor wondering if this would be the last time she saw Kara before pressing that Supergirl button based on the shock on Lena’s face when she asks Kara if she’s sure that she can trust Lena, even after everything.

Kara doesn’t hesitate to reassure Lena. Obviously, as it has been established, she didn’t agree with Lena’s methods, but when it came down to it, Lena wanted to help people, and when push came to shove, she came to Kara for help. “I know what’s in your heart,” is literally what Kara Danvers said out loud to Lena Luthor in this moment. 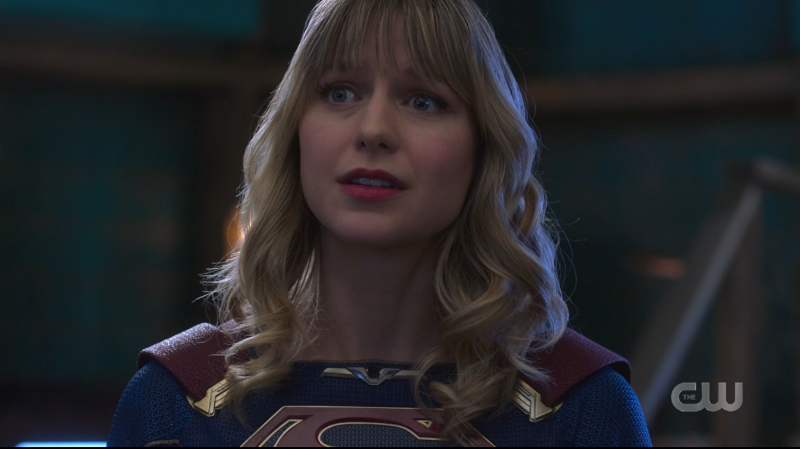 THIS is the Supergirl I know and love. The forgiving and trusting woman who follows her heart.

Kelly will go to Obsidian to get the code Lena will need to undo I Love Lexi while Alex and Dreamer go to fetch a bottle of planet fragments that will be to Lex as Kryptonite is to Kara for Brainy to turn into a weapon.

Meanwhile, Kara will go to the Fortress of Solitude to get Myriad and maybe some more weaponry for this battle. They’re worried about Lex tracking Kara but she’s ready to be a distraction. She’s willing to risk her life if it means saving half the population of the world. It’s not even a question. 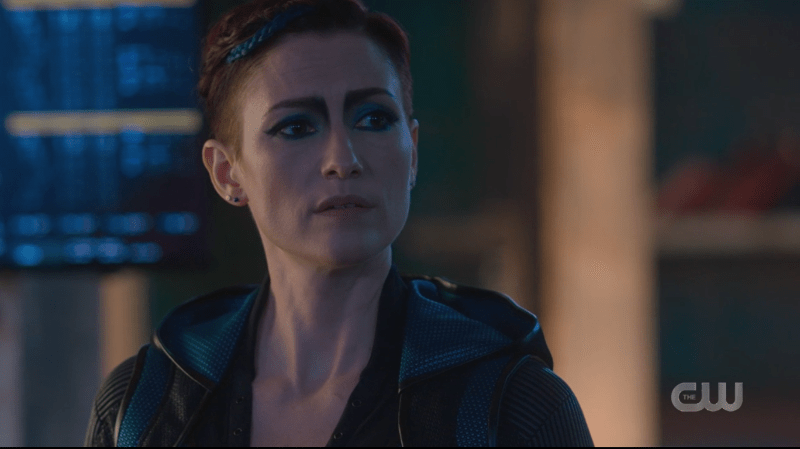 “I would prefer it if you would die approximately 200x less than you have in the past when trying to save the world? Thanks.”

And so Kara holograms in to talk to Lex, wears a truth seeker and tells him she wants to meet up. He calls her the “Maid of Might” which made me irrationally furious considering it’s not like “Man of Steel” is alliterative so there was no need to not call her a “Woman of Might” except for the patriarchy. But anyway, he agrees to meet her at the fortress and is so confident that he’s winning this war he started. He calls himself a god and prepares his wings of feather and wax.

After (easily) getting the code Lena needs at Obsidian North, Kelly is on her way out when she sees Andrea sobbing in a stairwell. Andrea says her father blames her for everything that happened and essentially disowned her, that Obsidian North and Catco are both going to be bankrupt by morning. 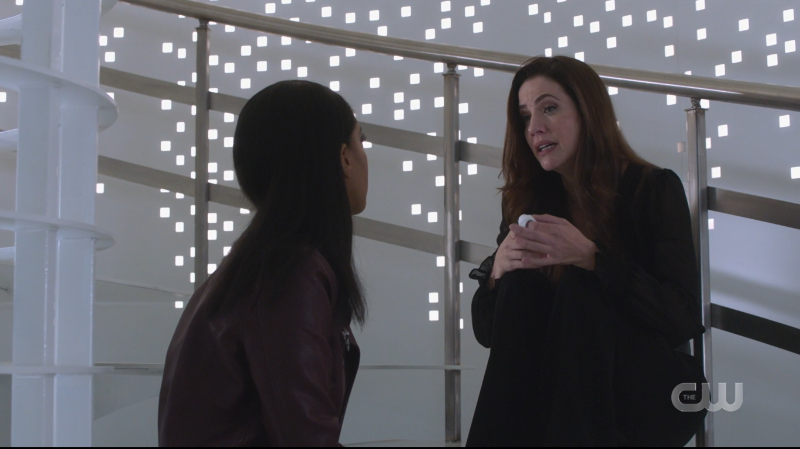 “It’s just, SYFY promised them a fifth season and now we might not get it.” :sniffles:

Kelly and her kind eyes tell Andrea that even though her father funded it, Andrea is the one who built Obsidian North from the ground up, all while running a multi-media organization that somehow still succeeds in print journalism. She calls Andrea brilliant, and says her father is a selfish narcissist. The only mistake Andrea made was doing this all for her father instead of for herself. 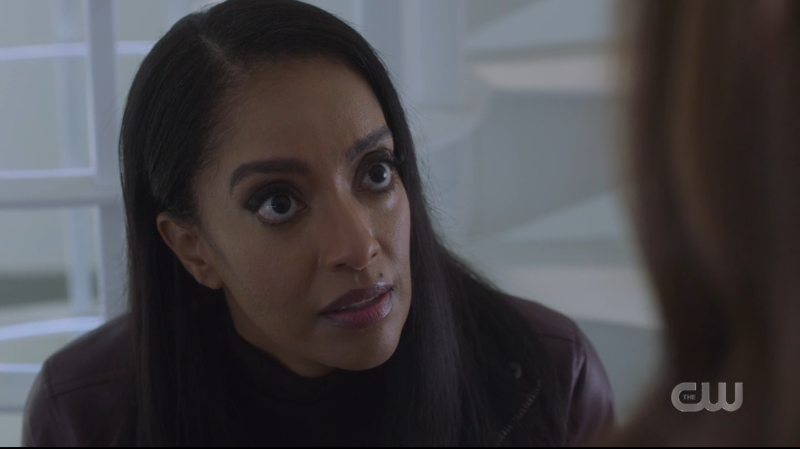 If Kelly is going to start therapizing everyone in her immediate circle, she’s really got her work cut out for her.

Back at the tower, Alex asks Space Dad why he looks so tense. He admits that he’s nervous about this mind meld, because it will mean M’gann will learn things he would have never shared with her, and he’s also worried that his subconscious fears about what she’ll find in his mind will risk the mission. But Alex has gotten enough pep talks from J’onn to return the favor; she tells him that he and M’gann have been through so much together, that he has to trust that she won’t hold anything in his mind or his past against him without having a conversation first. And who knows, maybe it will make them closer in the end. 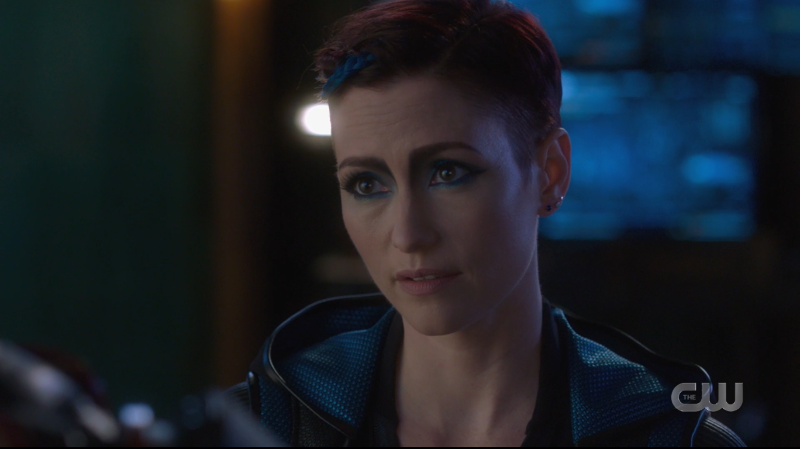 “In the queer community we have this thing called ‘trauma bonding’ and it’s how we relate to one another.”

Elsewhere in this confusingly-sized Tower, Brainy apologizes to Nia again, and Nia admits that she’s still hurt. She understands why he did it, but she wishes he had let her help him save the world instead of pushing her away. Or at least let her in on what he was doing instead of making her feel like he hated her. Brainy knows she’s right, and gives Nia his Legion ring as an interim apology while he figures out how to make it up to her. 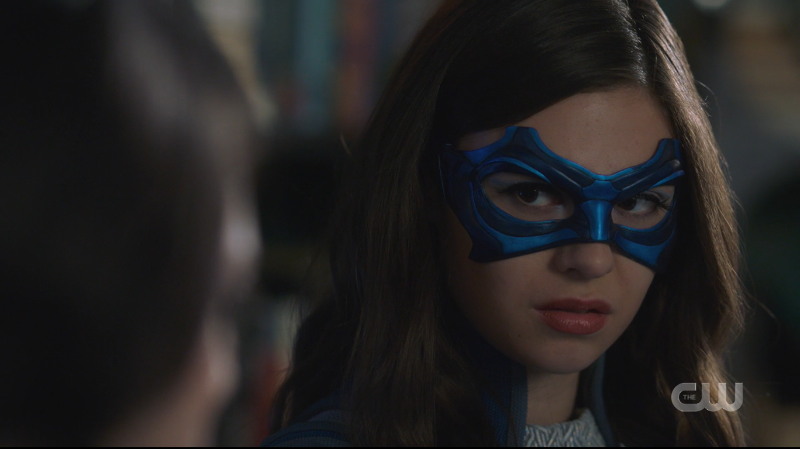 HELP SHE’S TOO CUTE I CAN’T TAKE IT

Later, Andrea sees on the news that her father publicly rebuked her, so she decides to take Kelly’s advice and be her own woman (though I doubt this is exactly what Kelly had in mind.) Andrea puts on her shadow necklace and bamfs away into the night.

Kara leads Alex and Lena to the Fortress, sending Alex off to the armory to find something they can use with the Anti-Lex substance once they find it. Lena has an idea for how to slow Lex down, but doesn’t want Kara to meet up with him. She thinks it’s a suicide mission, and won’t let Kara die like this. “I can’t,” she adds. Canonically.