Previously on Supergirl, I wrote a recap and named it Make it Reign which I’m not saying the Supergirl writers stole for this episode title but I’m not NOT saying it, Sam and Reign got split, Kara found out her mother was alive, the evil priestesses arrived on Earth, and the show forgot how to write women for a minute.

This week we begin with the three evil priestesses on Earth, and they are pretty pumped to have powers from the yellow sun. Their parade is quickly rained on though, and they are bummed to find out they can’t touch the Worldkiller Rock; luckily the good ol’ cult leader is there to help and holds it tight while the fire burns around his hand, rambling about sacrifice.

On Argo, Kara and her mom find the recipe for Worldkillers in Selena’s house and realize they need a way to communicate with their friends on Earth, which will be hard while they’re Under the Dome.

Speaking of Earth, Sam is down there, looking pretty rough. Ruby is worried about her but Sam promises she’s done lying.

At the DEO, J’onn comes and tells Alex that it’s time to say goodbye to her Space Grandpa. She’s so sad and her lip quivers and her eyes well up and it’s very hard to watch. 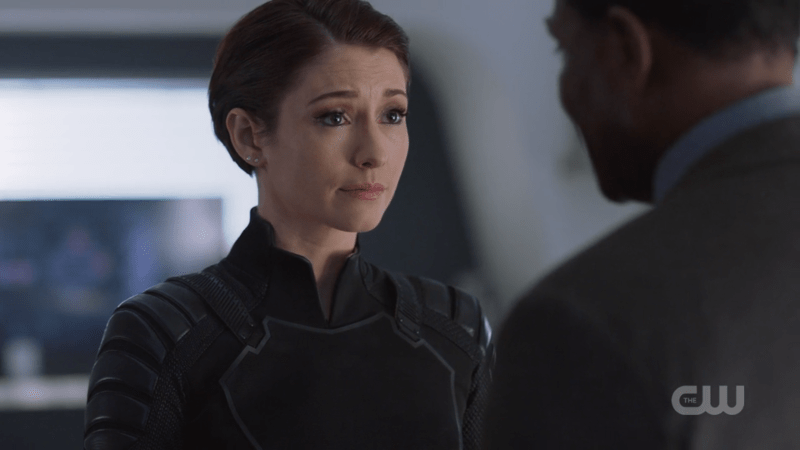 Making Alex cry is a crime against humanity.

He says sweet things to her and calls her intuitive and says that if he has to go, he’s glad to leave his son among people who love him. He leaves her with some wisdom, like “all of life is change,” and assuring her that he’s at peace, knowing he’ll live forever within his son.

While Kara and her mom are in Selena’s house, they find a hologram crystal and are more surprised that Selena’s visage appears than she is to see them through it. She gives them the update on what exactly is going on, as villains are wont to do, explaining that Reign would have emerged sooner if Sam hadn’t been so damn strong. She says neither can live while the other survives, and the point of the Worldkiller is to, well, kill the world. Essentially terraforming it into Krypton, humans be damned.

Selena self-destructs their home and Kara is more determined than ever to communicate with the DEO.

Sam managed to drag herself to the DEO because she feels so yucky, and Lena and Alex tell her some science about herself. 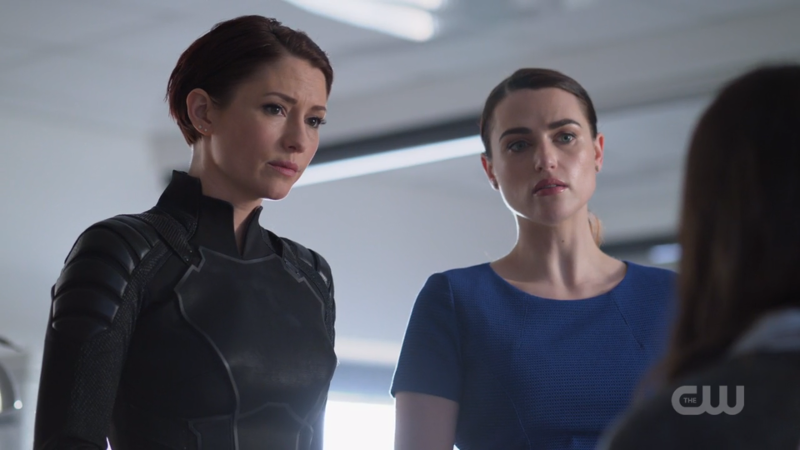 HERE. FOR. THIS. SuperAgent Science Squad!

I will say, this episode passed the Bechdel test a bunch of times, which almost made up for some of the other things. Almost.

Sam’s cells are transforming back into Kryptonian, so Ruby suggests to the two women with advanced degrees in science that maybe they try sun lamps.

On Argo, Alura remembers her husband’s old lab, so they head there to find a portal that he hadn’t succeeded fixing that they can get to work. Kara remembers this lab, and remembers her father treating her like she was a fellow scientist, like the most important person on the planet.

In the Fortress of Doomitude, Reign is reborn as a fire fetus, but she can’t become whole until they combine Pestilence and Purity’s blood. They can sense that it still exists on this planet, so they follow the scent like the Sanderson Sisters hunting children.

At the DEO, Sam is under some heat lamps, not feeling any stronger, when Alex and Lena put up a barrier as a test. 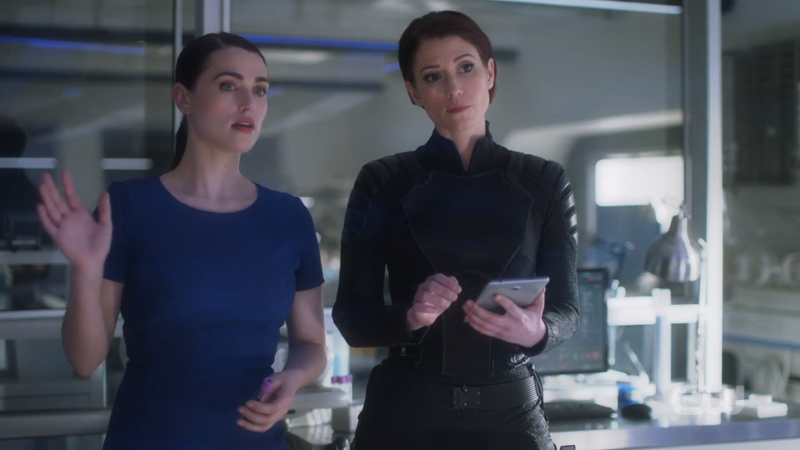 I think I lost time just staring into the beauty of this image.

But Sam is unaffected, meaning she’s not as Kryptonian as they thought.

Up in Kara’s dad lab, they find some crystals and use it to hi-jack the Momogram, so Kara talks to Winn through her mother’s image. He’s skeptical and yells for Alex, who instantly recognizes her sister’s urgent tone. (Erica Durance did an amazing job channeling Melissa Benoist’s mannerisms and speech patters in these scenes.) Through the hologram, Kara tells Alex what’s going on and asks them to whip up the portal on their end so they can get back to Earth and stop, well, the apocalypse. 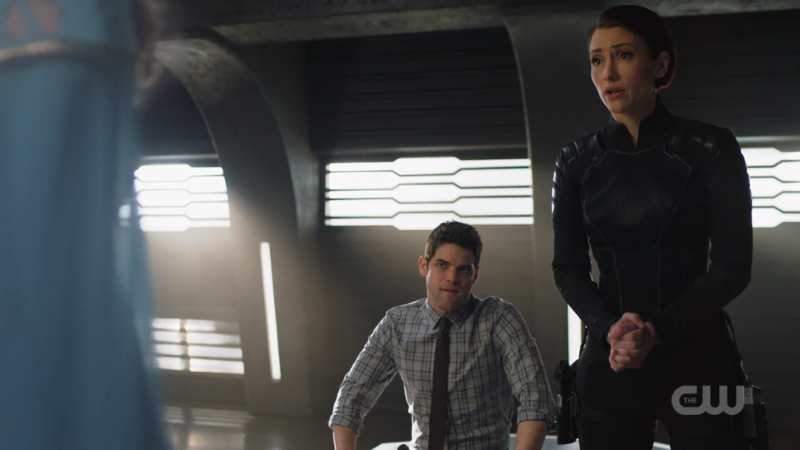 Alex saying “Shut up, Winn!” is my kink.

The priestesses show up at the DEO to get the blood and Alex sends Demos to destroy it while she tries to fend them off. 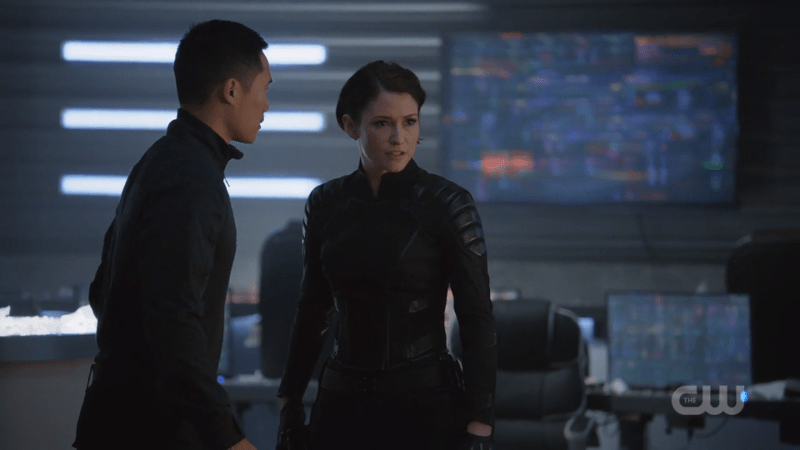 She uses her gun to send a pretty badass electricity net over them, but it only slows them briefly.

Alex runs off to her lab to get some Kryptonite, looking a little like “Kara would kill me for this” before rushing back to stop the new invaders.

Kara, after brushing aside a stale cracker on the controls, takes over the Momogram and starts to use her to move around the DEO and try to find a way to activate the controls.

Ruby does some cute smart things to help Demos get past one Worldkiller while still protecting herself and her mom.

Alex has another badass fight scene with her magnet-gun-fetching-gloves and even one of them with a kryptonite charge that she power-blasts at them and then does a flying two-footed double-kick and it’s Very Dramatic and Very Cool.

Meanwhile, Kara uses the vision of Alura to trick one of the priestesses into punching the portal controls, which is apparently how you turn it on, and Alura suits up and follows her daughter through the portal to Earth. 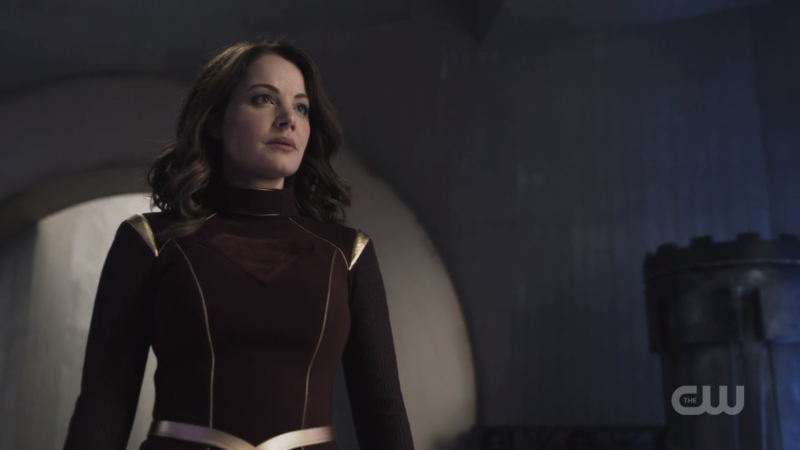 “Amazing how I happen to have a suit with the same waistline detail in my closet!!”

But they’re a little too late, and while Demos was running around with the blood he was told to destroy, he gets zapped threefold and murdered, despite being one of the few remaining people of color on this show. Not to mention two of the other people of color introduced this season are also actively dying. Demos has been a really fun background character for a very long time, and I guess the intention was to show that this whole Worldkiller business has stakes after all, but I wish they had chosen an unnamed character instead of our one Asian character who has been around for two seasons.

Selena gives another villain speech, digging out the tired classic “Caring makes you weak” and demands Kara hand over the blood of Purity and Pestilence. Kara, in what wasn’t her brightest idea, chucks it at her, but then zaps it with her eyes. Selena holds on tight, her hand frying in the process, and the priestesses get the hell out of dodge.

Meanwhile, Lena is doing some crazy science with Eve. Okay fine it’s just regular science. They think they’re at a dead end when Lena decides to test some blood she has lying around on an unwashed instrument and looks again and suddenly she think she might know what’s wrong. 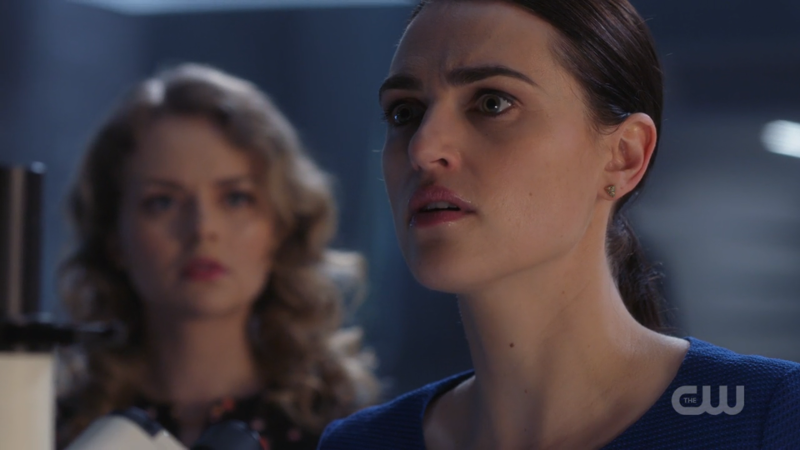 Lena brings Sam to the planning table in the center of the DEO and Lena tells them that they think Sam and Reign are still linked and that all they need to do to weaken Reign is to make Sam stronger. Alura suggests the Fountain of Lilith, which sounds pretty gay to me, but it’s in the ReignForest. Sam doesn’t care, she’s ready to go, and determined not to die. So she shouts her battlecry (“For Ruby!!!”) and tells Lena it’s okay to shock her half to death. 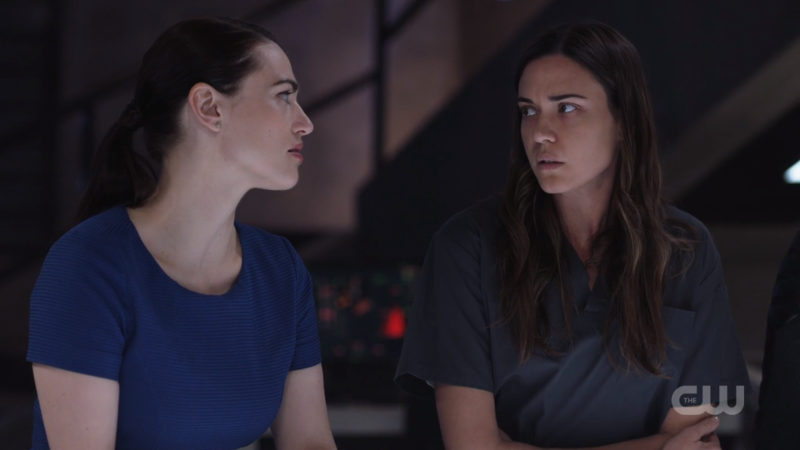 Save the Sam-Leader, save the world.

A moment of light in the stressful darkness is when Kara officially and proudly introduces Alura to Alex. 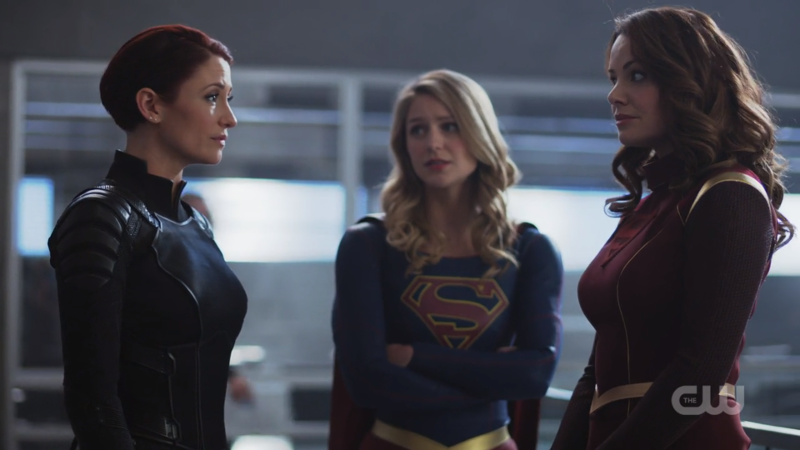 Alex looks a little wary, whether from suspicion or sadness that this is who is taking her sister away from her is unclear, but is gracious when Alura thanks her for taking her daughter in when she first landed on Earth.

Then six women pack into one room and support each other while Sam takes the trip to the ReignForest. 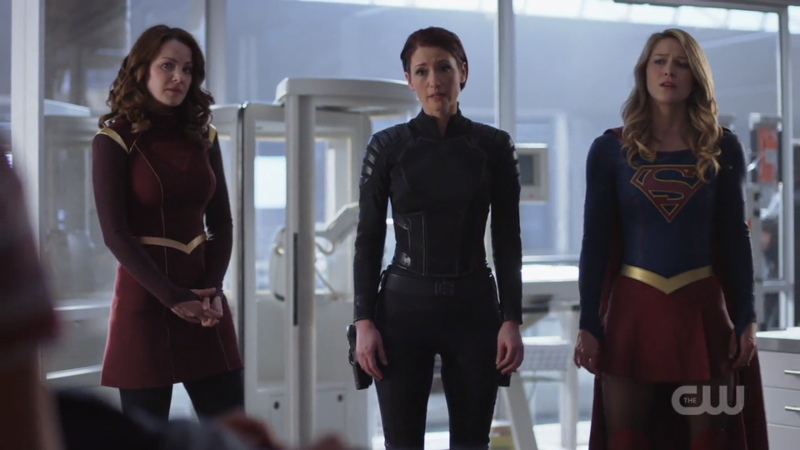 Six women working together to save the world. More of this is the show I want.

When Sam gets to the forest, she hears whispered threats hissing through her ear as she takes off running, but almost immediately falls down, so I don’t have the HIGHEST hopes for her success rate on her own in here.

In the end, it turns out Demos died for naught, because Selena still has enough blood all up in her burnt hand to have Reign be reborn, fully clothed and masked, with Pestilence claws, and I would presume a scream of Purity. She dives into the center of the earth to start the terraforming process and the ground begins to quake, the buildings to shake.

The cult dude formerly known as Byron Montgomery, having expended his usage once Reign is born again, is shocked and appalled that the evil deities he worshipped turned on him and killed him dead as soon as they didn’t need him anymore.

Lena offers to stay with Ruby and Sam while the rest of the women rush off to save the day.

It’s all hands on deck, and even though J’onn and his father had been spending the whole episode exchanging memories in a separate room, Papa J’onn decides he’d rather sacrifice himself for the cause then ensure every scrap of memory gets passed on. This will be his legacy.

One episode left, friends. I have no doubt Supergirl will save the world, but who will save Supergirl?