Previously on Supergirl, Alex quit the DEO, Lena was still hung up on her Non Nocheri plan, and Lex was trying to infiltrate Leviathan.

This week opened with a lady holding a sword chasing a dragon and, I’ll be honest, I thought for a second I accidentally put on an episode of Legends of Tomorrow. But no, we’re properly in National City, and the lady on a horse is actually just a lady using Obsidian tech.

It’s some kind of Obsidian cafe that Alex, Kara, and Nia are walking by. They’re chatting about the launch of the new VR program, and how it’s Alex’s first day out of the DEO and as a free agent at The Tower with J’onn. 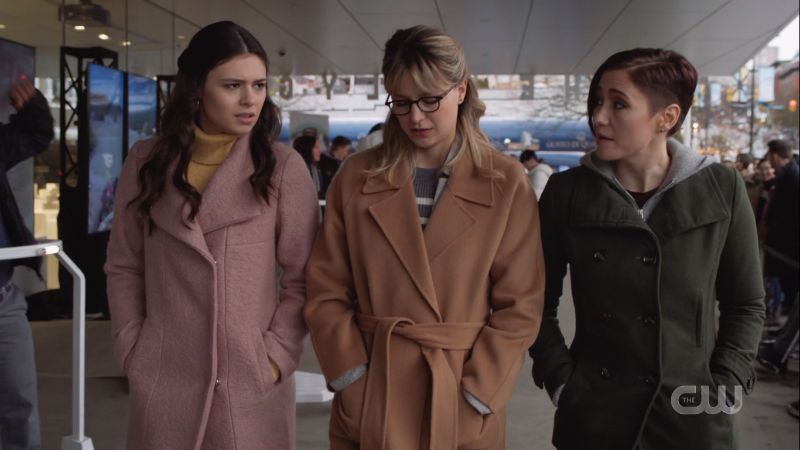 Dear Supergil, more of :gestures to these three women: THIS.

Kelly shows up because she’s packed a lunch of Alex’s favorite foods for Alex’s first day at her new “job.” (Even though I’m still not entirely sure if she’s being paid?) And despite the fact that I have some concerns about how exactly a hot pocket, mac and cheese, and dumplings are situated in the lunch box, they’re pretty damn cute, if I do say so myself. 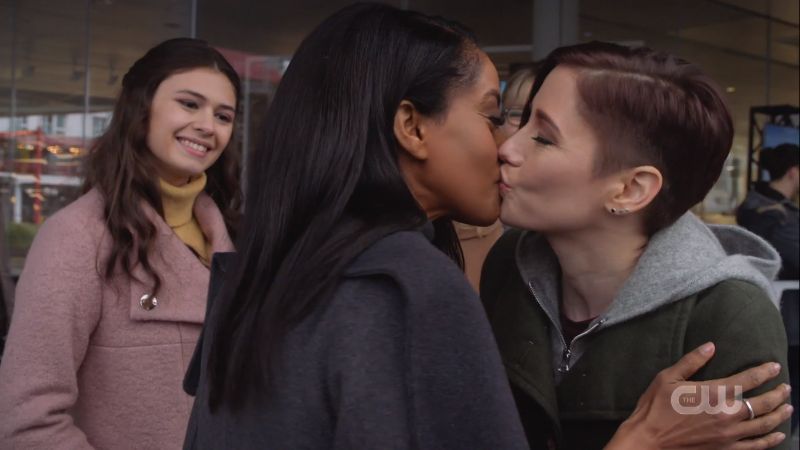 And there are even dumplings in this lunch, which Kara adorably envies. William approaches this group of gals and Alex and Kelly promptly scatter to leave the CatCo employees with the potential post-rejection awkwardness. But it turns out William doesn’t feel awkward at all; he has Nia and Kara’s coffee orders down pat and has one in hand for each of them.

He skips off and Nia is surprised he’s being so chill after being rejected. Kara just feels awkward. 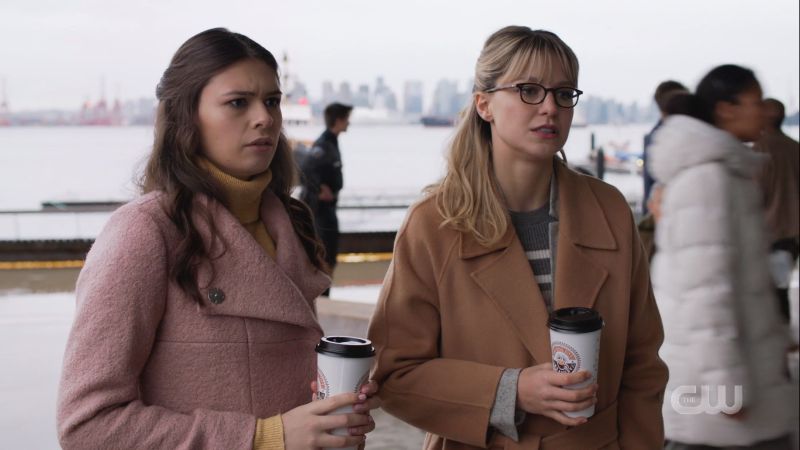 Frankly I feel like it would have been a better message if Kara rejected him and they went on to be great friends. But no one asked me.

Upstairs, Andrea is ready for her big new launch, feeling untouchable. But then the elevator she’s in goes haywire and she starts plummeting down. She cries out for help, and help of course Supergirl is there to save her.

When they get into the CatCo office, they find a manifesto that speaks as though Andrea is dead, saying if they don’t cancel the Obsidian VR launch, more people will die. 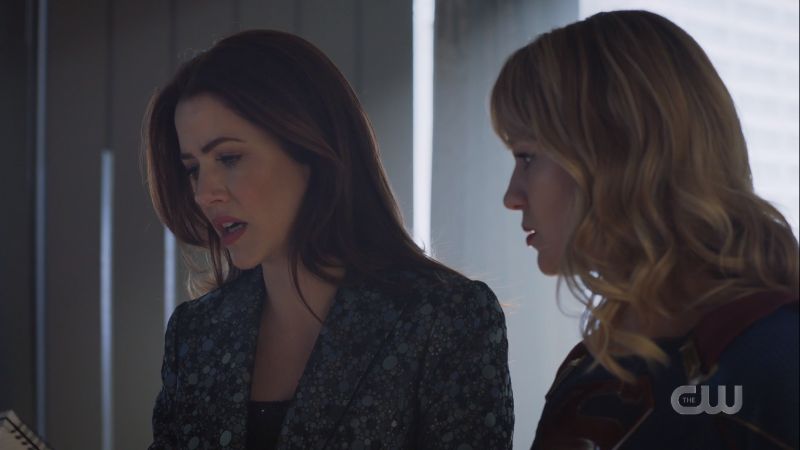 I think I’ve been watching too much Nancy Drew because I saw the coffee stain on this manifesto and I was like A CLUE.

But Andrea is determined and won’t let a little near death experience get in the way of her launch.

Down in her lab, Lena is testing Non Nocere, getting a vicious alien and a puppy to get along. 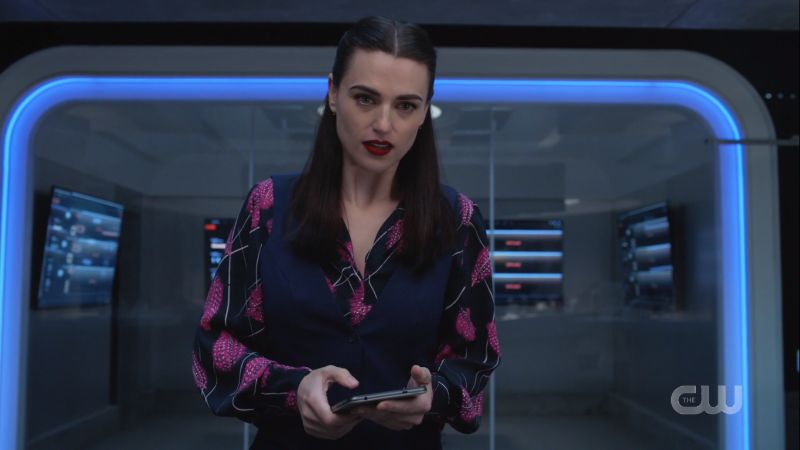 Where did she get this puppy? What is she going to do with this puppy? Is this her puppy now?

Lex is impressed, but Lena is worried that human brains are more complex and she doesn’t know if it will work. Plus, she’s worried about what the Superfriends said, how they think she wants to puppet master people, that she’s going down a dark path. But she really does just want people to be the best versions of themselves, to be more free and creative without their anger and violence weighing them down. Lex tells her she seems awfully concerned about what Kara thinks of her and that she should buck up because he has human participants for her. Prisoners who are volunteering to be part of her experiment. He leaves, proud of himself, and Lena is rightly suspicious. 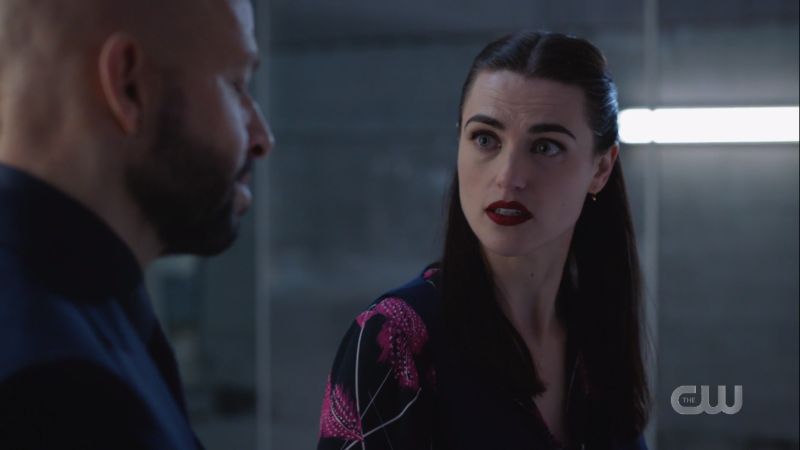 Lex heads back to the DEO, where Brainy is hard at work trying to reverse Toyman’s immortality code so they can take down Leviathan. But Brainy says that even once he does crack this, he assumes they are impenetrable like Supergirl is, so they have to find a way to weaken them before they inject them with the anti-immortality serum. So they have to find, essentially, Leviathan Kryptonite.

Lex decides that he can use the Obsidian launch to his advantage to get closer to Gemma, so he has the DEO offer Supergirl as Andrea’s personal bodyguard. (Side note, the name of this episode was The Bodyguard, which I think means technically Kara and Andrea should have kissed or Kara should have at least sung I Will Always Love You about Lena on a balcony but whatever.)

Supergirl is a little insulted to be asked to be a bodyguard but Brainy tells her the odds and Lex low-key threatens her, so she agrees. There IS a violent alien on the loose, after all. 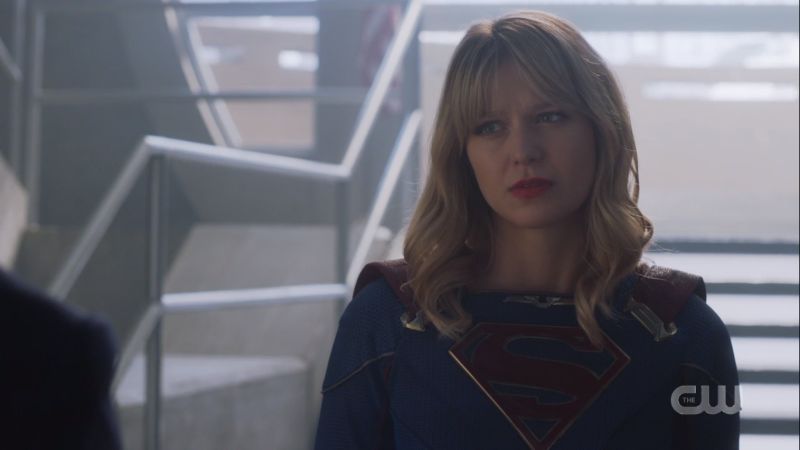 Across town, Alex and J’onn are in the Tower working, and Alex admits she feels a little untethered. She’s never not had a boss, or a clear mission or responsibility. Frankly, it’s even been a long time since she hasn’t had a gun and a badge. But J’onn assures her she’ll find her way. 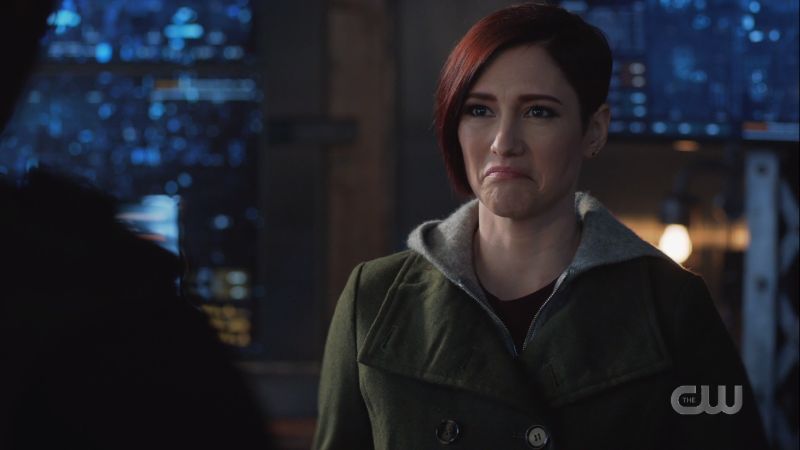 “Can I at least carry a baseball bat? Harley Quinn style?”

Supergirl flies in and complains about her new assignment, and asks for their help. She describes the kind of alien who attacked and J’onn thinks it sounds like a race of alien that usually uses their powers and energies to farm, and aren’t usually a violent people, but they’ll use that as a lead anyway.

Lex goes to meet with Gemma and do some wily dealings, and I’ll be honest with you, I’m starting to feel about Lex the way I feel about Constantine on Legends. He’s in his own sideplot that I don’t really care about at all and I kind of wish he would just go away and Lena would re-join the Superfriends. I really enjoyed Jon Cryer’s take on Lex but I think this has run its course.

The only blessing is Gemma seems as annoyed by Lex as I am.

Lena goes to the prison and is surprised to see how many people volunteered, from very violent men to the squirrely guy Steve that we’ve seen before. Steve is being beat on by a man named Toby and he tells Lena that he’s super excited for the idea that Non Nocere would end his torment. Lena is feeling the pressure. 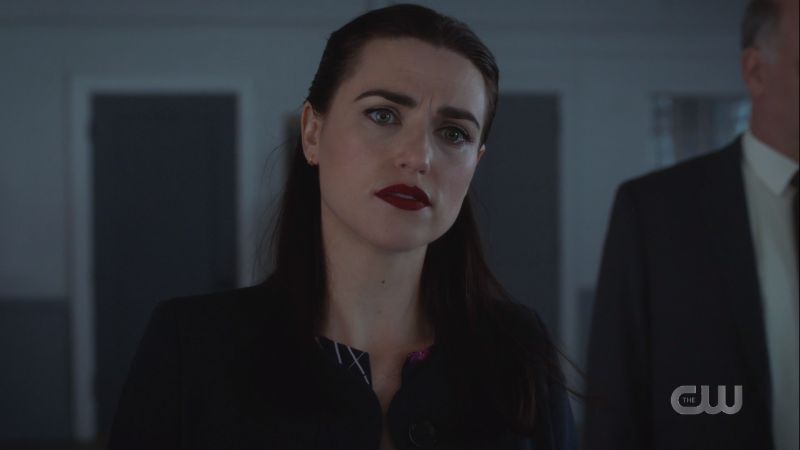 At the first Obsidian event of the day, Andrea is positively delighted to have what she dubs a #SuperGuard and takes a selfie. 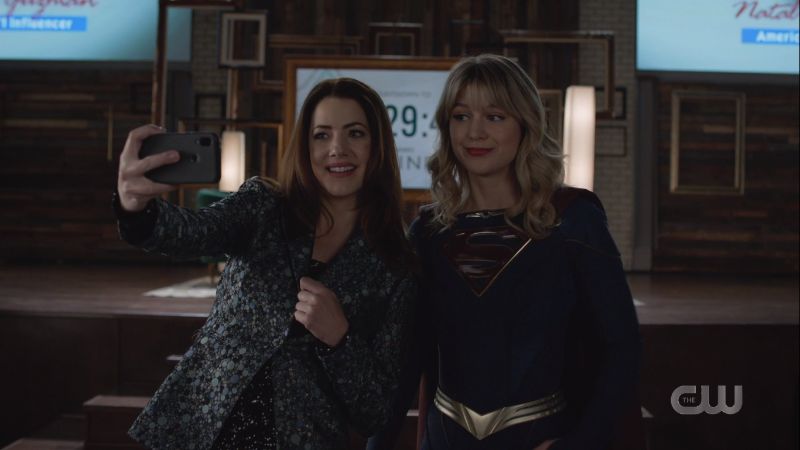 This tickled me. And Melissa did some really cute subtle reluctant/awkward moves before and after.

While she’s watching her charge, William strolls in and giddily introduces himself to Supergirl. Supergirl is concerned with him being near Andrea while she’s under attack but he says he’s an investigative journalist and that’s part of the job. (Kara wouldn’t know, she’s never done her job a day in her life.) Supergirl calls him heroic and Kara reconsiders rejecting him and I yawn and yawn and yawn because I’m still not buying their chemistry; I like them as chums.

On an investigative mission on their own, J’onn and Alex go to the gaylien bar to ask if anyone’s heard about this pink-energy wielding alien. The bartender points them to a man named Dimitri, who isn’t too pleased to see Alex. But once she assures him she doesn’t work for the government anymore, he helps them out and gives them a tip. 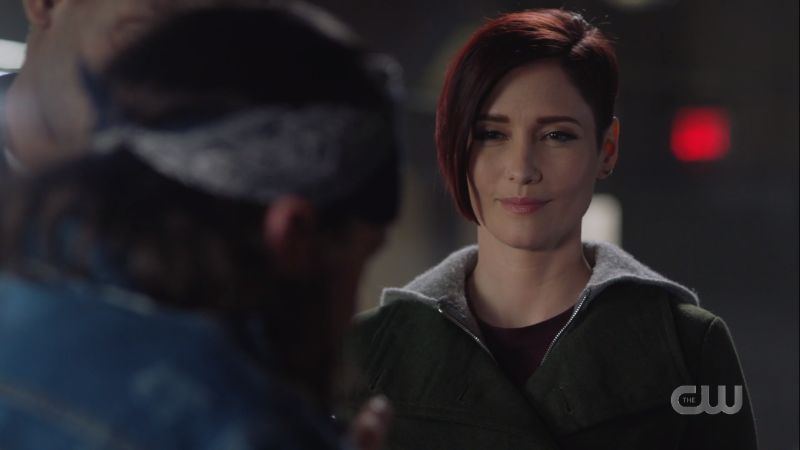 Me when a guy tries to hit on me at a bar.

Alex calls the tip into Brainy to see if he can find a location, despite J’onn’s concerns about using Lex’s resources for this, but Alex says Brainy is family and trusts him to tell her if he doesn’t think he can get away with helping. Brainy says he can help but then tells Alex that he didn’t find any information, which was a big fat lie.

This lie sends Brainy into a bit of a spiral and so he beckons Hip Brainy from the Big Brain to ask for his advice. He knows that he’s supposed to be helping Lex but he’s worried about his friendships because he’s a good pure boy. Hip Brainy tells him that aligning himself with Lex is the only way to be sure his friends even survive to decide to be his friend or not, so Brainy reluctantly continues on his duplicitous journey.

In the prison, Lena gives everyone lenses and starts her first human trial of Non Nocere. As soon as they take out their lenses, the energy is more chill. Steve’s bully asks him on a lunch date. Lena is so happy. 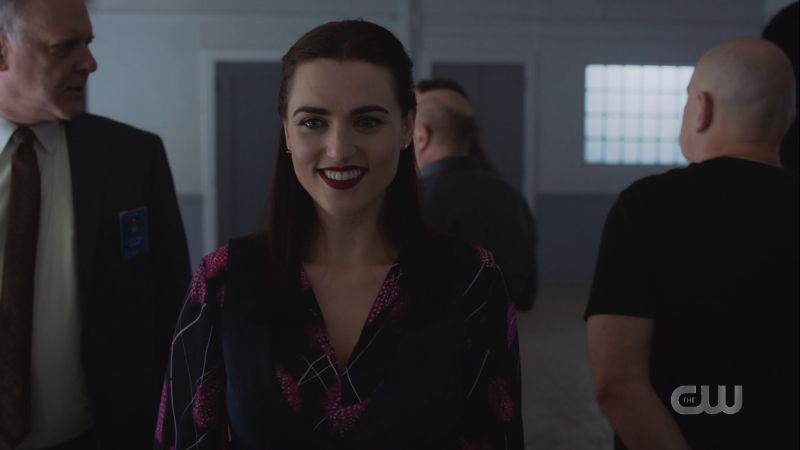 I wanted to live in this moment for the rest of the hour.

While Andrea is interviewed for a talk show, William and Supergirl chat about their stance on VR in general, and how William used to be into it until he started making real life connections via karaoke and game night. He says VR can’t replace real connection, and it seems that’s Supergirl’s stance on it, too. (The Kryptonian and the show at large.)