Today on Autostraddle: These are our jams. These are our NewNowNext photos. This is Stef’s interview with Kaki King. Come back later for a special Tonys post! Also, it’s your last day to get RODEO DISCO tickets for the special reader discount — $10. Tomorrow it’ll be $12, so if you get your ticket today you will be saving yourself the cost of an entire latte or one-third of a latte, depending on where you live. To get the code it’s price level “autostraddle” and password COWGIRL. 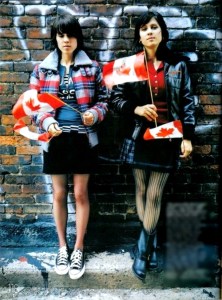 + Ladies & Lady-Allies, I present to you the Bad Fad Museum: “While the name of this site is BAD FADS, please note that this is neither an indictment nor an endorsement of any of the fads mentioned. As you know, during the ’70s the word ‘bad’ could alternately mean ‘good!’ Thus, this site was created to take a fun and nostalgic look at fashions, collectibles, activities and events which are cherished by some and ridiculed by others.”

+ The Sunday Times UK has a truly compelling piece about Britney Spears’s life — before, during and after the psychological meltdown and asks: Does her father hold the ringmaster’s whip? A lawyer Britney secretly contacted last year, asking him to free her from the conservatorship, has filed a number of lawsuits trying to get it lifted. In one, he stated that the control exerted over her medication and every other aspect of her life was a “near total deprivation of civil rights.” (@times uk)

+ A majority (58%) of conservatives approve of open gay service, a figure 12 percentage points higher than in November 2004, while support from weekly churchgoers has clocked up by 11 percent to 60%. (@on top magazine)

+ “I’m not on the front lines of the campaign for gay marriage. I’m going for a model that is conceptually broader. I want love and intimacy, and I want freedom, which means not being tied down.” (@philadelphia inquirer)

+ I feel like Megan Fox might not have a handler, or whatever it is that stops actresses from saying terrible/AWESOME things every single day: Megan Fox got depressed, put on weight, then lost a bunch of weight: ”Really my only job is to look attractive. I was so angry about that, that I went in the opposite direction. I turned into a really butch bull dyke for, like, six months…”_ (@ohnotheydidn’t)

+ Something totally earnest happened in Williamsburg, and I actually wish I’d been there: Muppets! Sesame Street Taking On Willimansburg Hipsters, Live! (@gawker)

+ This is the one and only thing that would make me watch Heroes again: if Claire goes lezzie!

+ Interview with Alison Janey: “To play CJ was so much fun.  I looked forward to memorizing my lines no matter how many there were because I knew they were going to be fantastic and fun to say especially when I got to dress down a 4 star general.  It was always a joy to do that.” (@women & hollywood)

+ What if sitcom roles were reversed?

Tegan and Sara want to share their new music:

new music from Tegan and Sara on Vimeo.