If you’ve never seen Steven Universe, allow me to take a moment and explain why the choices you’ve made up until this moment in your life are all wrong. Sorry, that was a little aggressive, but Steven Universe is perfect. Mey has written a lot about how important and queer it is, and her pieces includes lots of background information and a great overview. I only started watching Steven within the past year, and it has become a warm and snug security blanket that helps shield me from a world that feels increasingly colder. It’s an earnest, silly look at friendship and family, love and heartbreak — and also snack foods.

When a friend told me a Steven Universe RPG was coming out on PS4, I immediately knew I had to play it. This game, Save the Light, is actually a follow up to a 2015 mobile game called Steven Universe: Attack the Light! The structures are really similar, both are single-player RPGs with turn-based battles, but the newer version is longer and deeper. You don’t need to play the mobile game first, as Save the Light recaps the events from its predecessor in the first few scenes, but my wife says it’s fun and it’s also only $3 on both iOS and Android.

Despite some technical issues, which I’ll get into later, I’m absolutely loving Steven Universe: Save the Light. It feels exactly like I’m watching an extended episode of the show, and, as a bonus, I get to participate and interact with all of my faves. Speaking of faves, all of the voice actors signed on to record the game, so the characters are pitch perfect. And Rebecca Sugar herself was involved in the writing. Steven is enthusiastic about everything, Garnet is just the coolest, Pearl is all about strict order and rule-following (but with hints every now and then at how she has the tenderest heart in the universe and I LOVE HER, OK?). Everyone is just right. The newest gem to be introduced, Christine Baranski playing an over the top homeworld villain named Hessonite, is delightfully evil and a great addition to the cast. 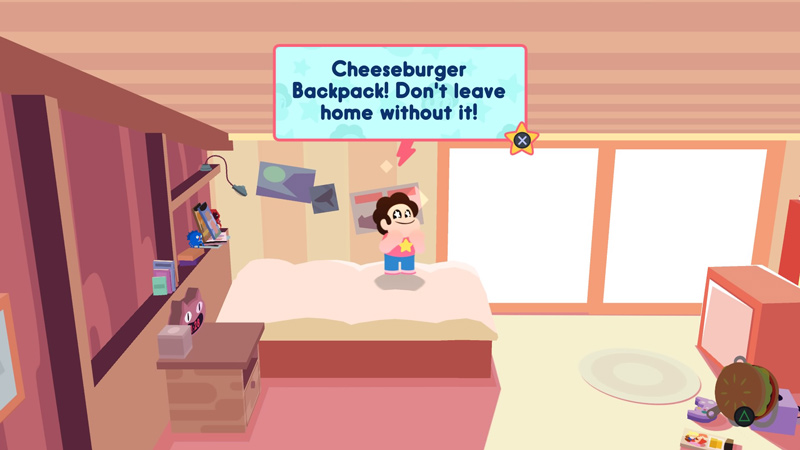 Everythings is so good! Right down to the stars in Steven’s eyes!

It’s not just the characters that make you feel like you’re in the show; there was clearly a great amount of care taken to replicate details, both small and large, when creating the worlds you can explore. Beach City is full of familiar faces and places, Bismuth’s Forge is dark and mysterious, the Strawberry Battlefield is broken, but somehow serene — each world is beautiful with lots of individual character. One small issue I’ve had is that because I play a lot of games where I’m able to control the camera angle, I don’t love that there’s a fixed camera in this game. I wanted to be able to peer around corners or scan what was coming next, but the camera doesn’t move until you inch forward. 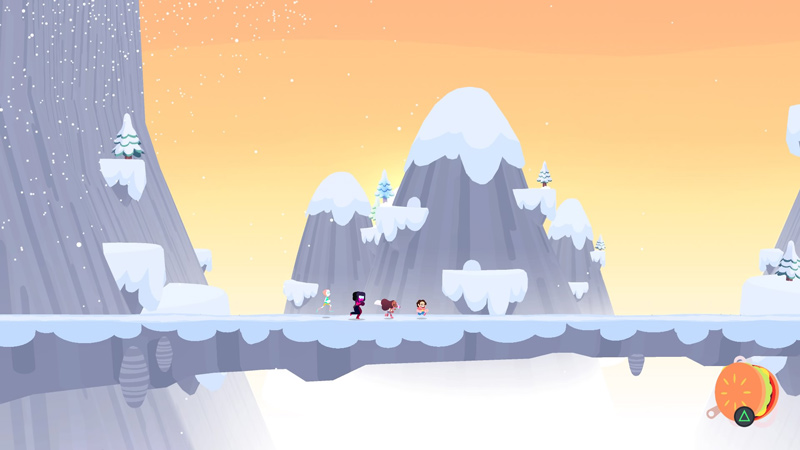 This is just one of many gorgeous settings

I’ve gotten used to the fixed camera the more I’ve played, so it only bothers me now when I notice the transition isn’t quite as smooth as it could be (one of the more minor technical issues I’ve found). The worlds are huge (and easy to get turned around in) with lots of paths to explore, stuff to find, and battles to fight. Unfortunately, the game doesn’t always seem to remember where you’ve been and what you’ve completed. I’ve had to re-fight enemies to clear areas multiple times, and it can get a little annoying.

Even when I completed enough of a world to unlock the next, the game still let me know I had only finished a percentage of the things I could do — they ranged from single digit up to about 65%. I’ve already put around ten hours or so into the game and I’m only about a quarter of the way through, so it’s definitely not lacking in gameplay length.

I am experiencing so many little moments of joy at nearly every turn as I play this game. For example, I didn’t expect to giggle to myself at a simple character upgrade screen (the place where you can assign points to different skills like attack, defense, or teamwork). I did just that, however, when Steven sang a little song (“RPG, RPG! It’s a quest for you and me!”) or when Garnet simply offered a deadpan, “Hello” right after.

The collectable items, which you can use in and out of battle to increase skills or health stats, are also themed for the show and have perfectly Steven descriptions: 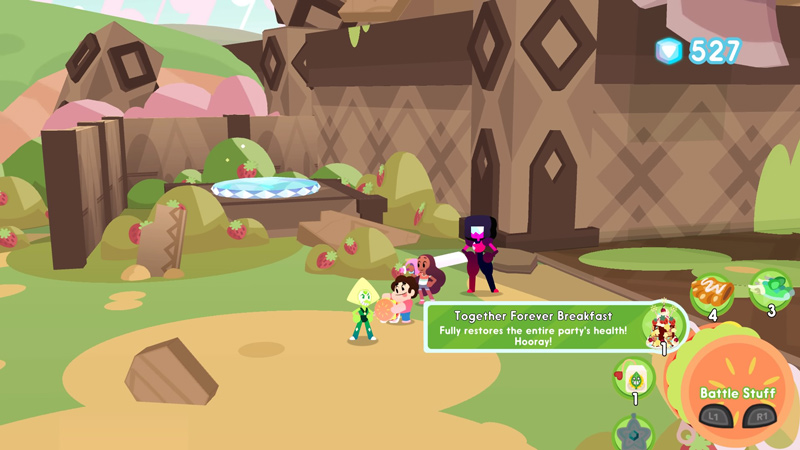 And anyone who is a fan of the show will be happy to know that you can acquire those frozen treats with an all new taste, Cookie Cat.

The battle mechanics in Save the Light are pretty straightforward. Every character has different moves they can perform in battle, each worth varying amounts of star points. When the star points run out, the party has to wait for the meter to reset and the points to be replenished before they can attack again (unless they have an item that allows them to skip the wait). As characters level up, they unlock better attacks and skills, but the enemies become more difficult as well. 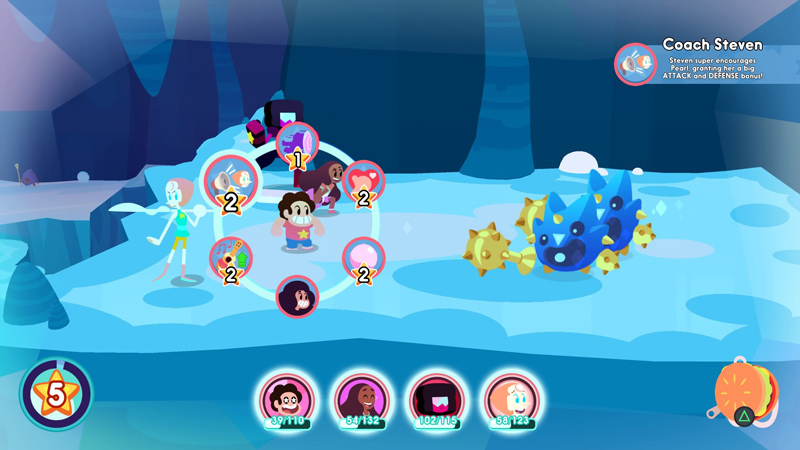 Battles are generally fun and engaging, but can become a bit repetitive, especially if you have to re-play them or if you’re on the cusp of leveling up and have had the same attacks for quite a while. As the battles get more challenging, there’s definitely an increase in the level of strategy involved that I found to be really satisfying. I had to think through the strengths and weaknesses of my party members, and figure out how best to utilize them all.

Just like on the show, friendship and teamwork are main themes of Steven Universe: Save the Light, and I loved every second of it. You build up relationship points by having party members compliment, protect, or help one another. When you fill the relationship meter up, it opens up special attacks and skills that the characters can perform together. If you fill up the relationship meter between two gems (or Steven and Connie), you can form a fusion with awesome new attack possibilities. I think the Stevonnie attack is the only reason I beat at least one of the bosses. 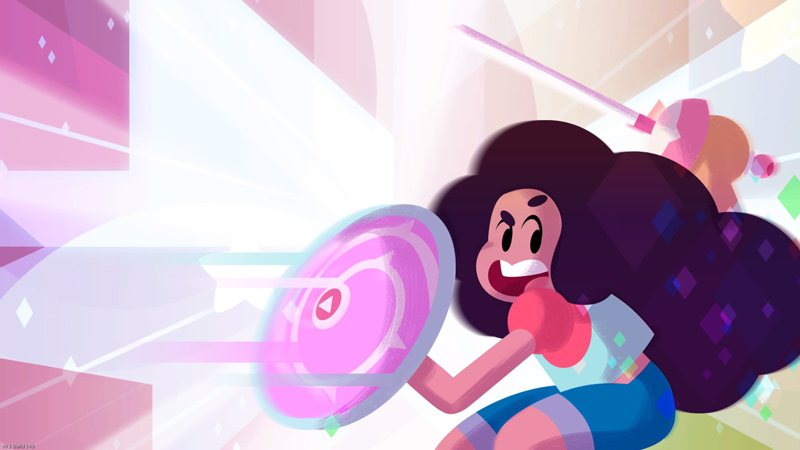 Which brings me to the only bummer of the game: technical bugs. (Womp womp.) They ranged from minor glitches that didn’t impact my gameplay to actually having to restart my PS4 in the middle of a boss battle. So far, I’ve had to quit the game a handful of times because of these bugs — the most hilarious of which happened when Peridot fell into a spike pit on a loop and yelled “Clod!” over and over again. 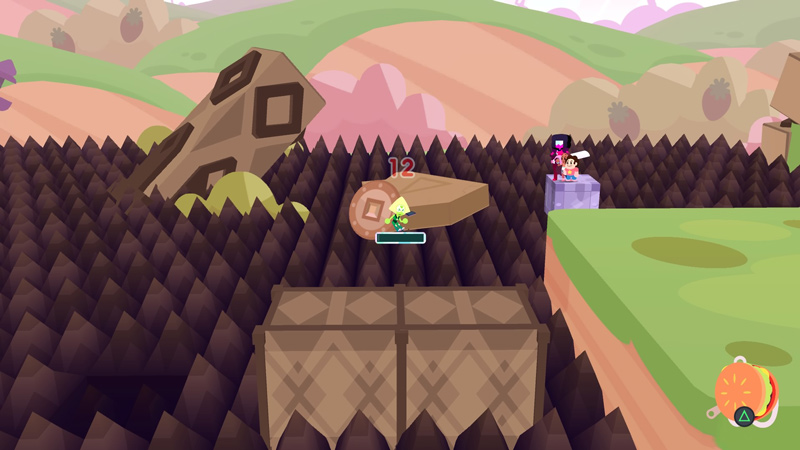 Got to at least 20 “clods” before I restarted

Luckily, the autosave functionality is decent and I haven’t lost more than about 15 minutes or so of progress at any given time. The studio, Grumpyface, seems to be aware of the issues. They’ve already released one patch and, hopefully, more are on the way.

Overall, if you’re a fan of the show you will probably love this game. It captures all the charm of the Steven Universe… universe, while immersing you in a new and engaging story. I’d maybe recommend waiting to see if more patches are released before buying, though, and in the meantime you can enjoy the mobile game first.

Steven Universe: Save the Light is available on PS4 and Xbox One. 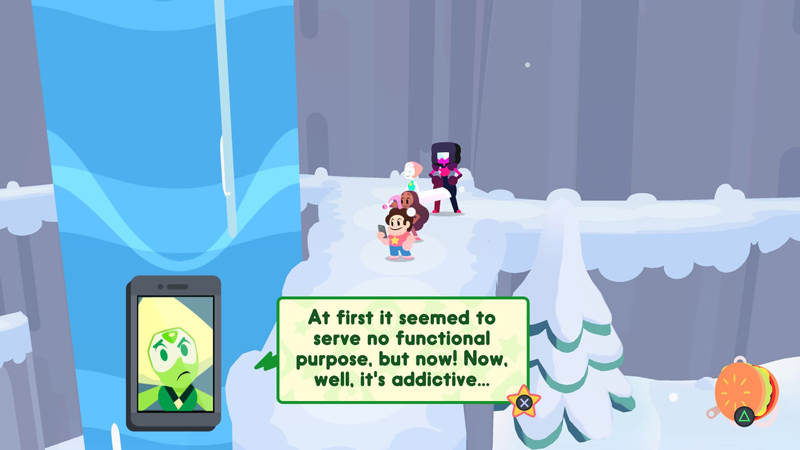