In this episode Sulu freezes his ass off while Kirk gets emotional, drinks, and performs experiments on Unicorn Puppies. You can watch along right here.

Time to Talk About My Feelings

So far, I’ve been digging Star Trek: TOS. I’m feeling the inevitable slip of a n00b who might eventually turn Trekkie/er. 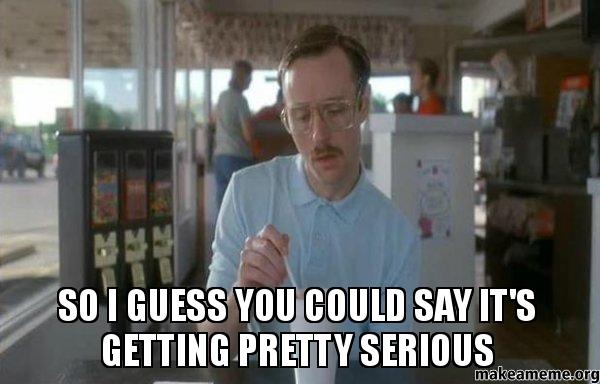 But here’s the thing—the past few episodes have been a major roller coaster of cool science-y ideas followed by plots that just don’t make any gaddamn sense and poor characters that aren’t expanded to their potential (Rand, cough cough). I mean, “The Naked Time,” right before this was so good.

A Planet of Unicorn Puppies

I thought that I would be enchanted by this episode, especially since it opens on Sulu standing around on Alpha 177 holding a Unicorn Puppy and contemplating the universe. 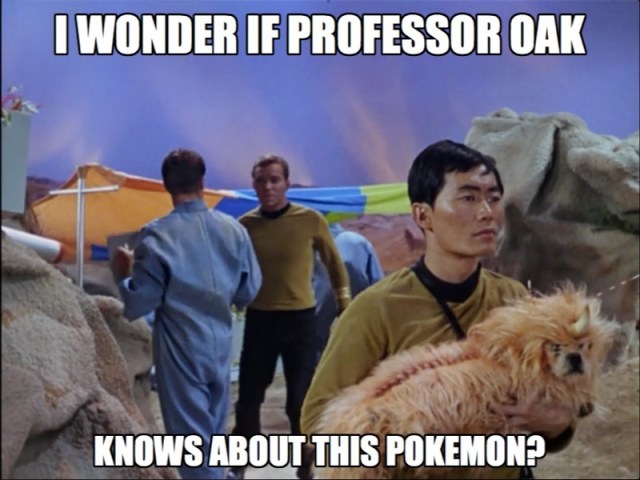 Captain Kirk congratulates the landing party for their great research and flippantly mentions that it goes down to -120 degrees at night. Maybe they should GTFO and cuddle up someplace warmer before night falls?

Hang on. Do they use Fahrenheit or Celsius in the future? Have humans finally agreed on a standardized form of measurement? According to the Memory Alpha entry on temperature, it looks like Celsius is the measurement of choice in The Original Series. Either way, negative 120 is freaking cold. What’s gonna happen to the beautiful Unicorn Puppies? 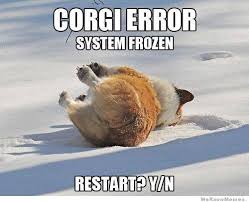 Fisher, one of the geologists, tumbles off a rock on Alpha 177 and cuts his hand open. During his tumble, he gets a funky yellow ore smeared all over his uniform. When Scotty beams him up, the transporter starts malfunctioning and making weird beeping noises. But the Fisher arrives safely and is sent to the sick bay.

Kirk is beam up to the Enterprise, and stumbles around with some major head rush. 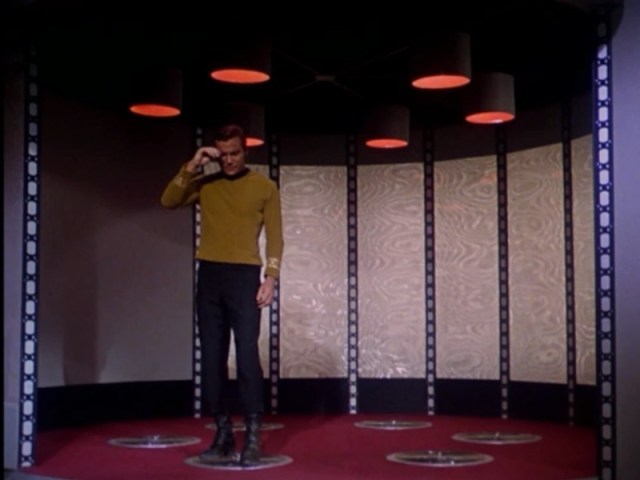 Scotty rushes to his aid, and ushers Kirk outta the room, even though the Captain instructs him to NEVER leave the transporter unattended. Because, you know, it might turn on all the burners and poop everywhere.

Of course, once they leave, something evil crawls through the transporter. It’s someone dressed in the yellow Starfleet uniform that only command personnel wear. They spin around dramatically… 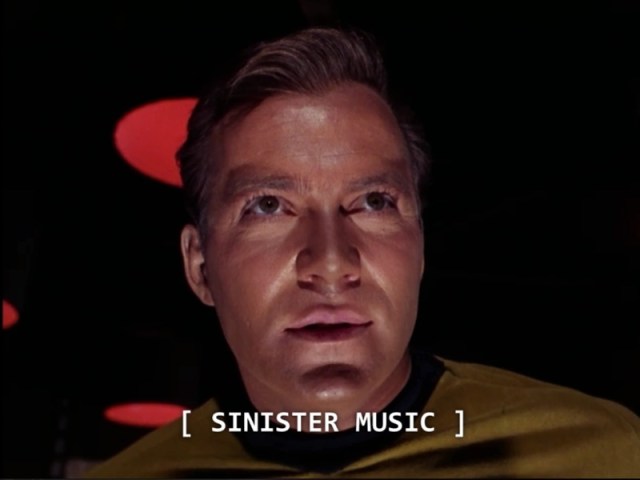 All right, I’m pretty curious about how Shatner’s going to pull off these two characters.

Getting Freaky in Sick Bay

Just so we’re on the same page, I’m going to rename the sick bay “Bones’ Land of Kink.” Last episode, we got to see Sulu tied up and screaming. Don’t worry, the Doc’s going to keep things weird.

Bones waves a contraption over Fisher’s cut hand, which presumably heals it. I’m not sure, they don’t really explain this part. 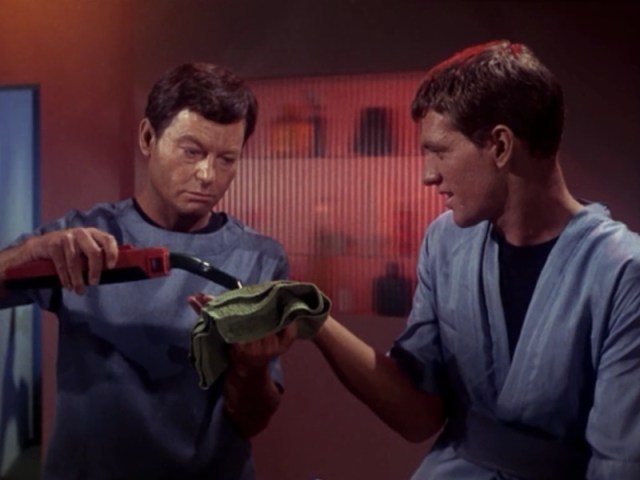 Is that a long-nozzled vacuum cleaner, or are you just happy to see me?

Once Fisher leaves, Dark Kirk wanders in and demands “Saurian Brandy.” Perhaps the transporter broke off the alcohol-loving, debaucherous side of Kirk?

Bones senses that something is off, and asks “What can I do for you?”

Dark Kirk majorly overreacts and screams, “I SAID GIVE ME THE BRANDY!” Then he starts to practice his Muay Thai Clinch on the poor Doc. 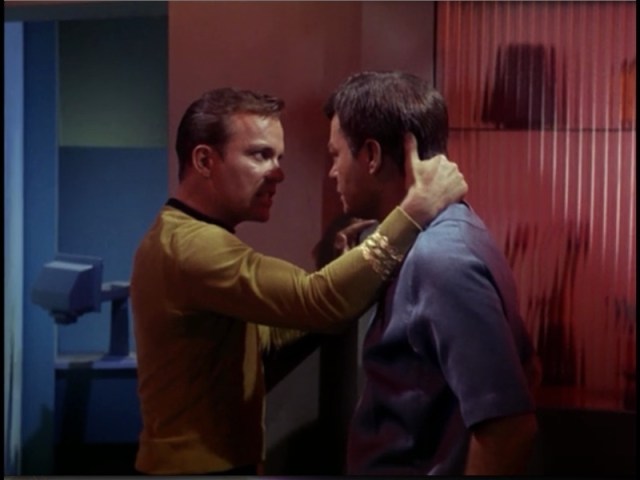 You might have a drinking problem, Dark Kirk. Just sayin’.

Dark Kirk starts glugging away and romping through the halls like some kind of predatory frat boy. And oh no! He’s leering at Yeoman Rand’s door. Cant’ she EVER catch a break? Why is she the target of every creepy male character in this place?

Meanwhile, the Real Kirk is practicing sensuous towel poses in his room. 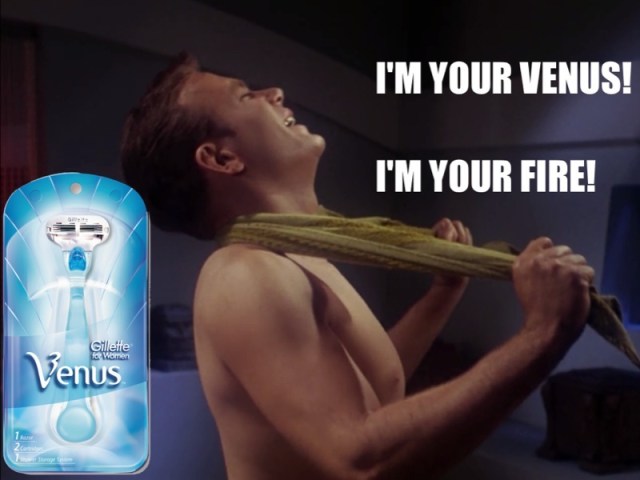 And guess who comes a-knocking? Spock!

He stares at Kirk and asks, “Is there something I can do for you, Captain? Our good doctor said that you were acting like a wild man. Demanding brandy.” Kirk dismisses it as a prank, and then flexes his muscles in front of Spock some more. 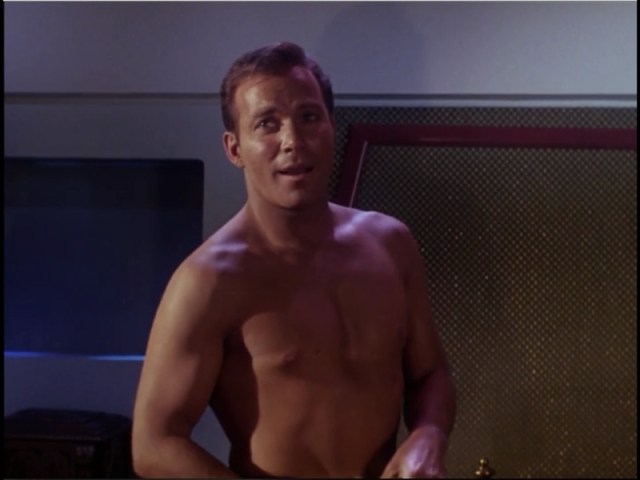 I’ve been a bad boy, but it’s not because of the brandy.

Scotty calls Kirk and Spock to the transporter room. He reveals that the Unicorn Puppy and its evil doppelganger beamed through, one after the other. One puppy is docile and cute and the other one is snarling. So they put the angry Unicorn Puppy in a white time out box. 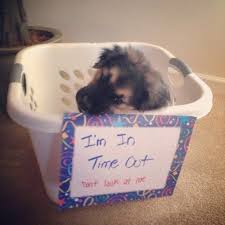 Meanwhile, Dark Kirk is lurking in Rand’s room and peeping at her. You know it’s Dark Kirk because he’s wearing black eyeliner like all perverse villains should! 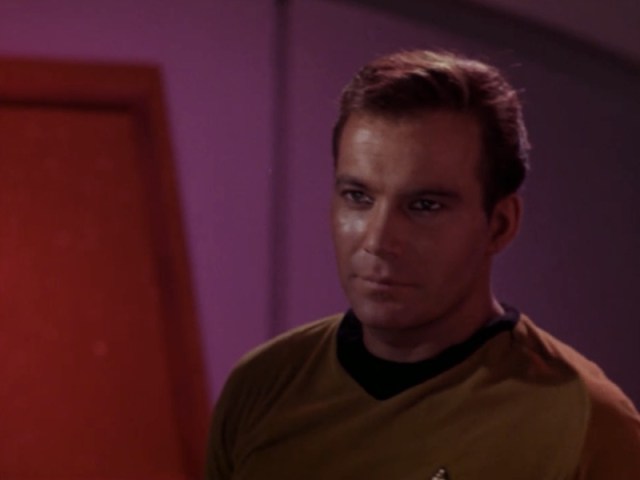 Rand, I’m starting up a band called Cradle of Banshees

Suddenly Dark Kirk is trying to woo his way into Rand’s pants, by asking her to use his first name while sucking down some brandy. Dark Kirk forces her into a kiss then wrestles her down to the ground. This shit was alarming. Am I about to witness the first sexual assault and/or rape on the Enterprise?

Rand lashes out, scratching some major gouges over Dark Kirk’s cheek. Then she runs away.

Rand gives a full report of her assault story to Kirk, Spock, and the Doctor. This is a very sobering moment – she doesn’t know about the two Kirks yet. So she’s staring at the man she believes attacked her, someone in a major position of power, and describes his assault. Chilling. So much discomfort here. I hope Rand stops being a sexual harassment magnet in this series.

Everyone flails around in confusion. Then Spock adds some clarity to the situation. “There’s only one logical answer. We have an imposter on board.” DUN DUN DUUUUN

I gotta say, I’m very impressed with Shatner’s ability to change his body language in both roles. He struck some very different poses throughout the episode, reminding me a bit of Smeagol during some scenes. Very un-Kirk like. 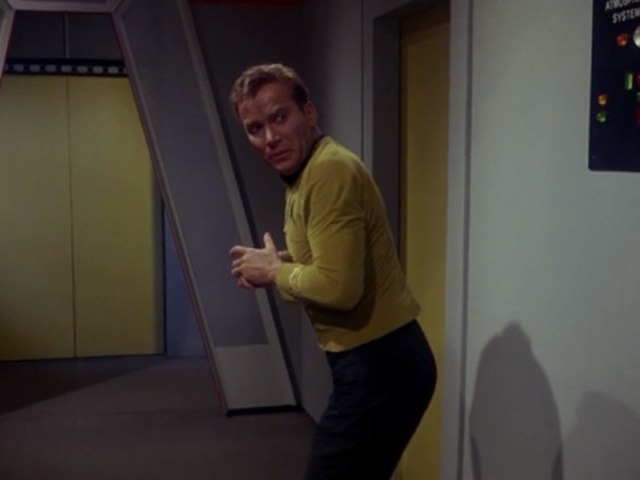 But wait! Remember earlier, how Kirk mentioned that Alpha 177 turns into a frigid hell at night? Well the ENTIRE LANDING PARTY IS STILL THERE! No one else can beam up without splitting into doppelgangers. So, they’re about to become popsicles unless they fix this transporter thing. Also no one wants to kill Dark Kirk because they’re not sure about what the consequences might be. 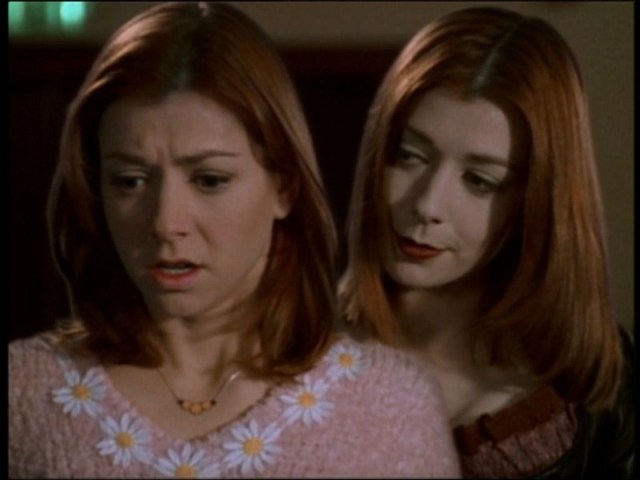 I wonder if this’ll pan out like this Buffy episode, Doppelgangland.

Dear writers: is the transporter the only way for you to retrieve people from a planet? That seems awfully risky! Can’t you just land or send shuttles down to get the freezing crew?

Kirk wants to make a warning to the entire crew about his doppelganger over the intercom. But Spock wants Kirk to keep it hidden, since it would cause the crew to question Kirk’s cred. Honestly, this is the last thing anyone should be worried about right now. Sulu is FREEZING!

Turns out Dark Kirk is actually part of Real Kirk. Go figure. “Somehow in being duplicated, I have lost my strength of will. Decisions are becoming more and more difficult.” He decides to make a public announcement about the doppelganger.

Dark Kirk hears the intercom and goes through a major identity crisis, screaming “I’m Captain Kirk!” over and over. 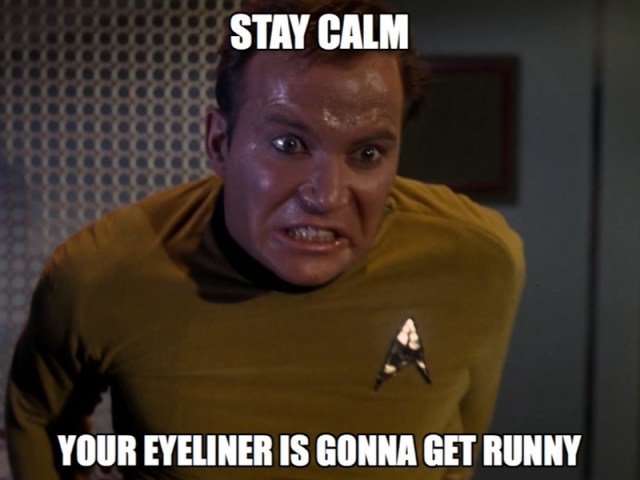 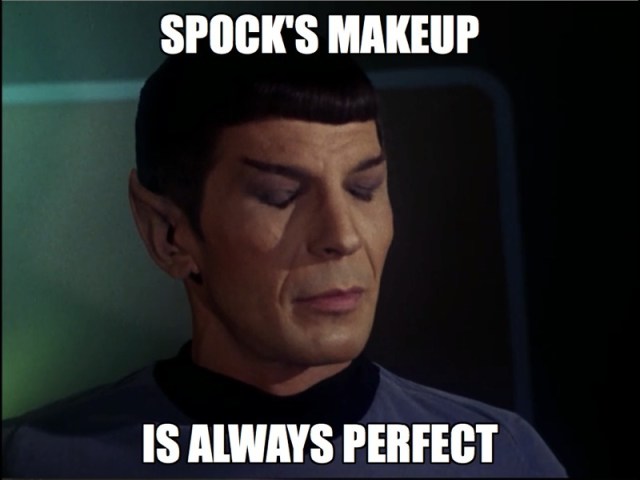 A Lack of Priorities

Kirk checks in on Sulu and the rest of the landing crew. It’s negative 20 degrees now! Oh my gosh!

However, the Captain is too busy musing over human duality and his dark side to think about the landing crew. So he decides to grab a drink with Bones! 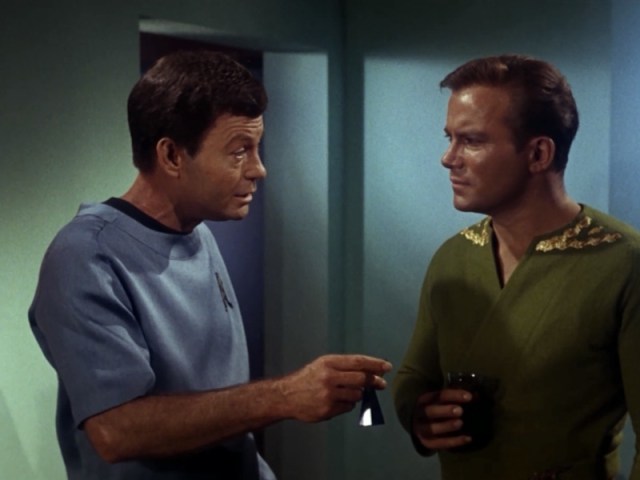 Isn’t it great that our fingers and toes aren’t turning into ice cubes?

Apparently Kirk and Spock aren’t operating with the same urgency as me. At this point, I’m screaming at my computer screen, “Prioritize! Sulu’s gonna die!”

Spock pulls out some of his sexy strategic knowledge, probably from so many 3D chess games. He points out that Dark Kirk seems to have all the captain’s knowledge about the ship. They’re the same person right? So Kirk just needs to guess what he’s planning to do! 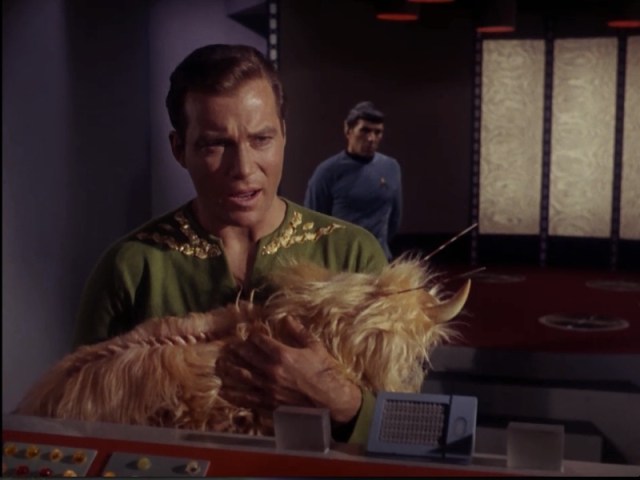 Spock: Where would you go to elude a mass search?
Kirk: To our secret bedroom with the unicorn puppy.

Kirk thinks about it, and decides that Dark Kirk is hiding in the lower Engineering levels. Because that’s how the last dozen villains hijacked the Enterprise.

Kirk begins to duel with his Dark self, and hey, it’s kinda turning out like that Buffy episode after all! Kirk tells his evil twin, “You can’t kill me. I’m part of you. You need me. I need you.” And “I have to take him back. Inside myself. I can’t survive without him.” Ahem. No homo.

But peeps, this entire time, Sulu and Co. are still freezing! And they’re getting even colder! 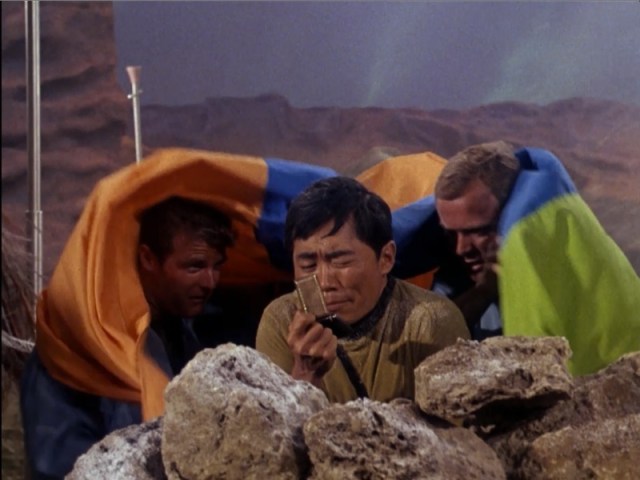 Scotty and the Doc try to recombine the puppy after patching together the transporter. But when they recombine the Unicorn Puppy, it dies!
Then Spock says a bunch of stuff that doesn’t make sense:

“I survive it because my intelligence wins over both. Makes them live together.” Spock on his human and Vulcan halves. Oooook. Not sure how that’s gonna keep Kirk alive. But sure.

After way too much deliberation, both Kirks jump into the transporter. It’s funny to think about William Shatner standing on the transporter for a few minutes embracing some dude playing his doppelganger. 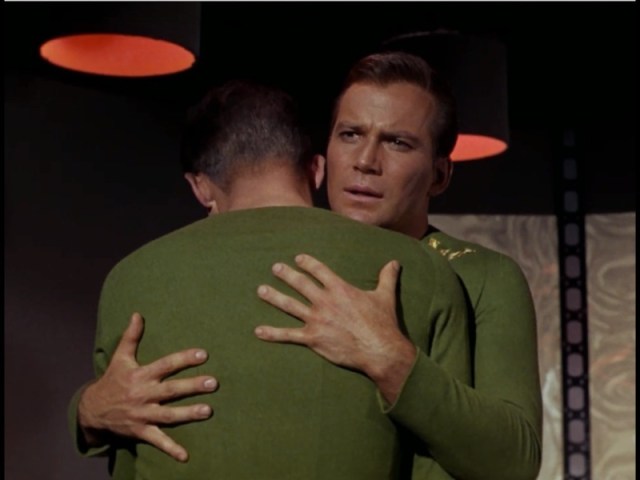 Once Kirk is restored back to normal, he yells at Scotty to beam back the landing party. Guess what!? It’s -117 and they’re all totally frozen!

But don’t worry, Bones reassure everyone that they’re just suffering from “exposure and frostbite.” And they’ll all recover just fine. Really? Really?! 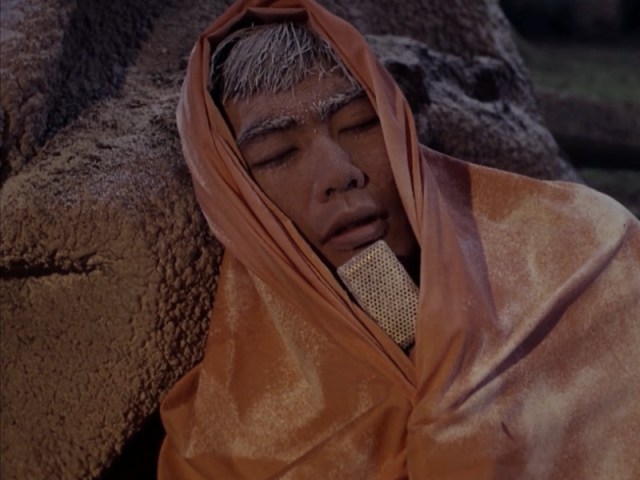 They fly away from Alpha 117, and Kirk muses over that duality of mankind. “I’ve seen a part of myself no man should see.” Yup, and I’ve seen some major plot catastrophes and scientific issues that no fan should see. I can’t end it this way, so I’m just gonna just leave this screenshot of Sulu here. 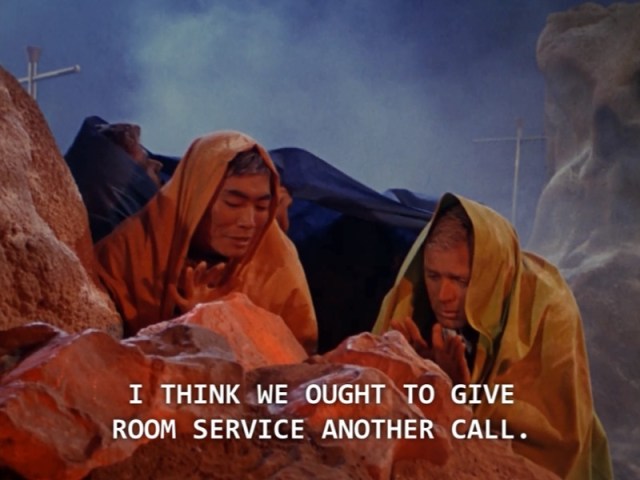 Sulu keeping his spirits up even while this episode goes to crap around him.

Stay tuned for next week’s episode, which contains rampant sexism, trivializes human trafficking, and is generally horrid and I’ll rip it apart!